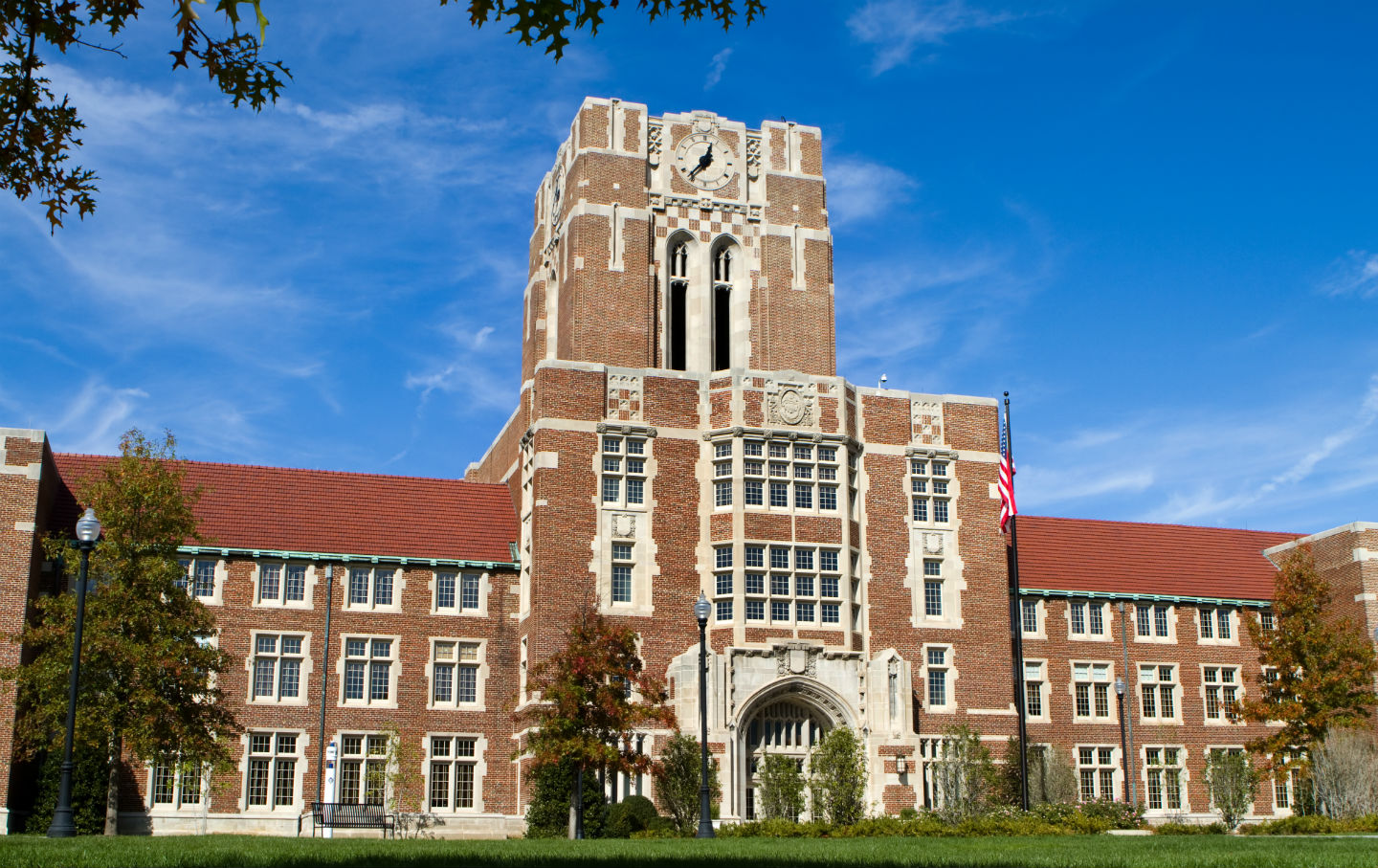 The University of Tennessee in Knoxville (Shutterstock)

Tennessee’s community-college students are starting the school year with high hopes, as thousands of first-years stream onto campus with the brand-new “Tennessee Promise” scholarship program. But state higher-education workers are getting off to a rougher start, fearing that instead of getting a funding boost, they’ll get sold to the highest bidder.

Under a plan recently issued by the administration of Governor Bill Haslam—who won national accolades for making Tennessee the first state to offer comprehensive “free community college for all”—workers at public facilities across the state, including higher-education institutions, will see their jobs outsourced, potentially at the expense of wages and benefits. The scheme, publicized last month by the campus workers’ union, United Campus Workers–Communications Workers of America (UCW), set off a flurry of angry criticism from officials and workers, who see both jobs and education at risk of aggressive privatization.

The request for information (the first step in the contracting process), quietly posted on the Tennessee Department of General Services website, invites vendors to inquire about providing services covering almost every campus function, including building maintenance, financial management, security, and possibly food service and project management in the future—striving for “continuous innovation” and lowered operating costs.

After union activists protested the plan, rallying under the slogan, “Tennessee is not for sale,” University of Tennessee President Joe DiPietro has explained in public statements that the administration has not finalized the outsourcing plans and might opt out of some provisions “if we determine they are not workable or don’t achieve long-term savings.” Still, the UT executives are largely on board with the statewide austerity agenda. Even while boasting of expanding access to college courses, the governor and education officials seek to retool the college “business model” by tracking academic outcomes and “finding efficiencies.”

In a recent interview, Haslam suggested the budget-balancing act has pitted funding for students against operational costs, pointing out that lowering university tuition rates was one driving factor in the privatization push.

The budget crunch follows a cascade of funding crises that have squeezed higher education hard. Last year the legislature passed a regressive budget that eliminated proposed pay raises for teachers and other public workers and severely underfunded a plan to boost graduation rates, the Complete College Act. With a $377 million budget gap looming over the next decade, campus staff are still fighting for a living wage for workers statewide, and resisting cutbacks to healthcare and retirement benefits.

For campus workers, that could soon mean doing more for less pay. Tom Anderson, a facilities purchaser for the University of Tennessee, said in the union’s statement in response to the plan, “The [privatization plan’s] scope includes every person, and every job, for every building everywhere. Haslam wants to outsource our safety, health, and education to some for-profit, out-of-state company.”

The state’s higher-education system has flirted with privatization before. The UT-Knoxville launched a custodial outsourcing scheme that, according to the union, devastated the labor force: “Outsourced workers were paid significantly less than other UT workers, had no benefits, were subject to arbitrary cuts in hours and experienced high turnover as a consequence.”

While the facilities management plan is separate from Tennessee Promise, the juxtaposition between these two budget initiatives—austerity for state workers and scholarships for state college students—points to a central dilemma at the heart of public higher education: A campus is a community, a system that needs people to keep the lights on as much as it needs students in the lecture hall. But officials tend to slash budgets by weakening the institutional infrastructure that fosters intellectual development.

UCW advocate Thomas Walker noted that despite the ambitious goal behind the Complete College Act, the chronic underfunding “has left all of the colleges and universities cash-strapped, as they’ve met benchmarks but haven’t seen the promised funding increases.” Similarly, he speculates that under the new TN Promise plan, “to make college free with no additional resources, the governor has to squeeze personnel costs and overwork people to make up for the difference.”

Critics of the governor’s corporate approach to higher education have raised concerns about the state’s focus on expanding tuition-free community college at a time when other higher-education programs were struggling with rising tuitions and cutbacks in wages for college staff and faculty.

And there may be a corporate logic to that as well. Both the Complete College Act and the Tennessee Promise plan reflect a push by policymakers and philanthropists to make college not just more affordable, but more “performance-based”: backed by Gates Foundation funds, institutions have championed reform programs driven by “metrics,” linking “degree productivity” with economic productivity—making a diploma pay, literally. The economic benefits of college are undeniable, of course, but many education advocates warn that this business-minded approach is dumbing down of college.

Some studies have revealed spotty results for hyped-up performance-driven programs. As with K-12 school reform, without targeted investments in disadvantaged communities, strict performance measures will fail to address systemic resource inequities plaguing marginalized students. Academic activists say the so-called “completion agenda” prioritizes quantitative results over quality of teaching and learning—resulting in what some administrators have described as “simplistic models that stress content as opposed to student learning.”

In a critique of the Complete College initiative, UT-Chattanooga biology professor and former UCW Legislative Committee Chair Tim Gaudin wrote, “Although we will no doubt hear from our legislators about the need to do ‘more with less,’ colleges and universities are no more staffed with magicians than any other enterprise, and if given fewer resources, we must cut back on the services we are to provide.”

Whether administrators are raising tuition, slashing wages, exploiting low-paid adjunct faculty, or narrowing curricula to juice up graduation rates, the focus on numbers seems patently at odds with the idea of a liberal education. Tennessee’s facilities management plan may seem like a mundane effort to streamline operations, but the plan speaks to a hard lesson in the quest for “efficiency”: You can’t keep cutting the cost of running a campus without eventually cheapening the education in the classroom.