This story was produced by The Hechinger Report, a nonprofit, independent news organization focused on inequality and innovation in education.

The young woman in the black sweatshirt was indignant. Across the negotiating table, a stern, occasionally sharp-tongued adversary was refusing to budge—first on wages and then on the organization’s social-media policy. “We’re a hospital,” the woman said with marked intensity. “Don’t you agree that our first responsibility is to our patients?”2

Nearby, a cluster of people were engaged in a fierce debate on the fairness of random drug tests for employees. Over in a far corner, a third group traded opinions on whether to accept management’s proposal to offer new hires 401(k)s instead of pensions. “It’s just for new employees,” said a guy in a purple T-shirt. “But we have to think about solidarity,” replied a young woman in clear-framed glasses.3

The speakers weren’t impassioned union representatives or managers concerned with the bottom line. They were juniors at Niles West High, an economically diverse school in the Chicago suburbs serving approximately 2,500 students. The collective-bargaining simulation was organized by the DePaul University Labor Education Center, which runs the exercise in 10 high schools to introduce students to economic justice and the negotiating power of unions. For most of the teenagers, it was the first time they were exposed to what unions do—not to mention their first encounter with terms like “HR,” “401(k),” and “union security.”4

Lessons like these help students gain critical-thinking skills and give them an opportunity to learn about workers’ rights and labor history—subjects that are often missing from classroom discussions, educators say. And with a stack of studies suggesting that the decline of unionized labor since the 1970s has deepened America’s economic inequality, some argue that teaching students about organizing might offer a chance of preserving the country’s middle class.5

“Many of the gains made by the labor movement, people just take for granted,” says Matthew Hardy, communications director for the California Federation of Teachers (CFT), which hopes to introduce labor history and bargaining exercises in five school districts this fall. “From things like workplace-safety laws to child-labor laws to vacations, holidays, civil rights, Medicare, Social Security, you name it—these didn’t appear out of thin air…. Working people standing together did that.”6

CFT, which represents roughly 120,000 educators, is lobbying for $2.7 million in state funds for a three-year pilot program that would incorporate labor history in civics, economics, and history classes, along with simulations like those run by the DePaul center.7

Students aren’t likely to learn much about the way that unions have shaped economic and social policy if they stick to traditional textbooks, according to a report by the Albert Shanker Institute, a pro-labor group named for a longtime leader of the American Federation of Teachers. The 2011 study of four popular textbooks on American history found that coverage of the labor movement was “narrow and sometimes seriously misleading.”8

“Textbooks tend to be tilted to the perspectives of the Rockefellers and the du Ponts and the Morgans, and don’t do a fair job in terms of representing the conditions that working people were toiling under, or the often difficult struggles they had to engage in to establish basic rights,” says Leo Casey, the Shanker Institute’s executive director.9

Striking workers, for example, are often portrayed as menacing and violent. In its treatment of politics during the mid-20th century, the Houghton Mifflin Harcourt textbook The Americans downplays the concerns of steel and railroad workers about their wages and celebrates President Harry Truman for threatening to draft striking workers into the Army. Truman, the book declares, refused to let organized labor “cripple the nation.”10

But the textbooks mostly minimize or ignore the role of unions. One reason for this, according to Casey, is the outsize influence of Texas on the country’s textbook market. The state’s Board of Education meddles more than most in the process of approving textbooks, he says, and looks unfavorably on progressive social movements. As a result, publishers have tended to gear their textbooks toward pleasing this deep-pocketed buyer.11

“This is a lesson that rewards rebellion, and it’s often the rebellious classes that do well.” —Adam Sanchez, a history teacher at Harvest Collegiate High School in New York City

Adam Sanchez found this to be the case when he started teaching US history, first in Portland, Oregon, and later at Harvest Collegiate High School, a small public school in New York City. “You might have some mention of the labor movement in a chapter on industrialization, or, in a decent textbook, they might talk about the labor movement a bit in the 1930s,” he says. “But, really, it is totally ignored.”12

Eager to help plug these gaps, Sanchez began sharing course materials on labor through Rethinking Schools, a publisher that co-launched the Zinn Education Project to develop curriculums on workers, women, people of color, and social movements. To date, some 75,000 teachers have signed up to download its materials, including the lessons on labor, says Deborah Menkart, co-director of the Zinn project.13

Sanchez’s favorite lesson (not one he authored) is the “Organic Goodie Simulation.” In the exercise, the teacher owns a “goodie machine” and pits the students—divided into employed and unemployed—against one another. The teacher tries to drive down workers’ wages by offering lower-paying jobs to the unemployed, who face starvation because they can’t afford enough “goodies.” Eventually, some students recognize that it’s in their collective interest to organize, and they may strike or seize the goodie machine. “It’s an interesting flip of the typical classroom,” Sanchez says. “This is a lesson that rewards rebellion, and it’s often the rebellious classes that do well.”14

At Niles West High, 70 students bustled into a large classroom shortly after 8 am on a recent Friday for the start of the collective-bargaining simulation. In preparation for the exercise, they’d received handouts on the fictitious Getswelle Hospital and its protracted labor negotiations with the nurses’ union. After being cast as union members or managers, the students were assigned “coaches,” who included a Service Employees International Union researcher and an organizer with a local mechanics’ union. The DePaul center strives for verisimilitude: When the students’ contract deliberations stalled, it even brought in two mediators from the Federal Mediation and Conciliation Service, the government agency that helps resolve worker-manager conflicts.15

At table one, Hana Frisch, the young woman in the clear-framed glasses, took the lead in negotiating for the union. Her opening bid: wage increases of 7 percent the first year, then 4.5 percent and 4 percent in years two and three. Frisch’s counterpart on the management side, Lily Gussis, returned to an earlier union proposal on employee health care. The hospital was willing to shoulder a slightly higher share of insurance costs, she said.16

The two groups hustled back to their corners. Management hammered out a counterproposal on salary increases. The nurses’ union began to consider overtime pay. “Any Rolling Stones fans out there?” asked Jerry Hughes, a retired federal mediator and coach for the union side. “‘You can’t always get what you want, but you get what you need.’ That’s the whole point of collective bargaining: You go for what you want to get what you need.”17

Steve Grossman, a social-studies teacher at Niles West High and the DePaul center’s associate director, says that few high schoolers know anything about unions before the simulation. He tells them to seek the best deal for their side, but it also has to be a fair deal. If the union tricks management into accepting exorbitant wages, for example, that’s in no one’s best interest. “The kids understand why—the hospital might go out of business,” Grossman says. At the end of the exercise, he asks students to consider what the contract would have looked like if they’d had no right to bargain. “It’s kind of like a switch goes off.”18 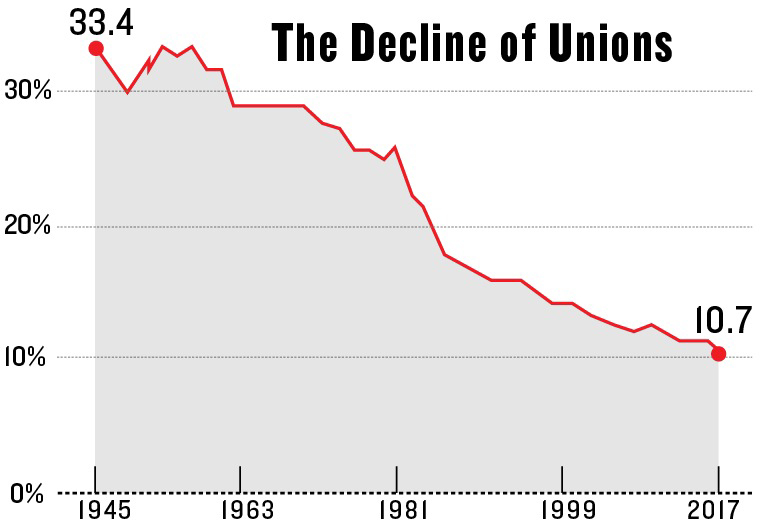 At least two states have tried to ensure that students receive an introduction to labor history. In 2009, Wisconsin passed a law incorporating the “history of organized labor and the collective bargaining process” into the state’s social-studies standards. The rollout of those lessons has been slow, but the Wisconsin Department of Public Instruction released a draft of the new standards in January.19

In 2015, Connecticut approved legislation requiring the State Board of Education to distribute course materials on labor history and law, collective bargaining, and workplace rights. The labor-backed bill proved controversial, however, with critics alleging that it was merely a way for unions—which today represent just 10.7 percent of US workers—to reach young people in order to attract future members.20

“I don’t think there’s anybody here that will deny that our education system does indoctrinate our kids,” State Representative Charles Ferraro, a Republican, said in a hearing on the legislation. “It does give me pause as to why this bill was supported by unions primarily…. I don’t see how this particular bill is gonna give a fair, balanced approach in teaching our children.” Some teachers, meanwhile, objected to the measure’s top-down approach and said decisions about what to teach were best left to them. The measure ultimately passed only after compromise language was added that mandated making information available on “the history and economics of free market capitalism and entrepreneurialism” as well.21

The Department of Justice Is Overseeing the Resegregation of American Schools

Labor historians and progressive educators shrug off the accusations that they’re trying to brainwash students. “There’s a lot about free-market capitalism that’s already out there,” said Steve Kass, president of the Greater New Haven Labor History Association, which supported the bill. “The idea with this was to rebalance the scale.”22

In some places, groups affiliated with unions have tried to educate young people about collective action by helping them organize around perceived injustices in their own lives. AiKea, an offshoot of Unite Here Local 5 in Honolulu, helps teens operate “justice clubs” in their schools; the students have successfully campaigned for funding for air-conditioning in their classrooms and against a dress code they felt was sexist. “Schools can be a great way to inspire young people and teach about economic justice,” says Lisa Grandinetti, 22, who was active with AiKea as a student at Honolulu’s Mililani High School and now works for the group. But, she adds, because of overtesting and standardization, “that’s not what they are doing now.”23

In Illinois, there’s no requirement that high schoolers learn about labor history, but the state recently started requiring that students pass a civics class in order to graduate. Jessica Cook, director of the DePaul center, says she hopes this will prompt more teachers to incorporate the collective-bargaining simulations into their lesson plans. Over pizza toward the end of the four-hour session at Niles West High, Cook told the students: “If there’s one thing I hope you take away from this, it’s that it’s easier to have a voice in your working conditions when you’re together.”24

One of the students, Muhammad Afzal, said he hopes to be a nuclear engineer and will probably wind up working for a big corporation. The collective-bargaining simulation, he said, helped him consider how he might negotiate for better pay and working conditions when he’s older. “I learned about how to communicate and how, if you’re more civil, you get a better deal.” Before this day, he added, “I didn’t realize there was a system [for this] where you try to be fair.”25