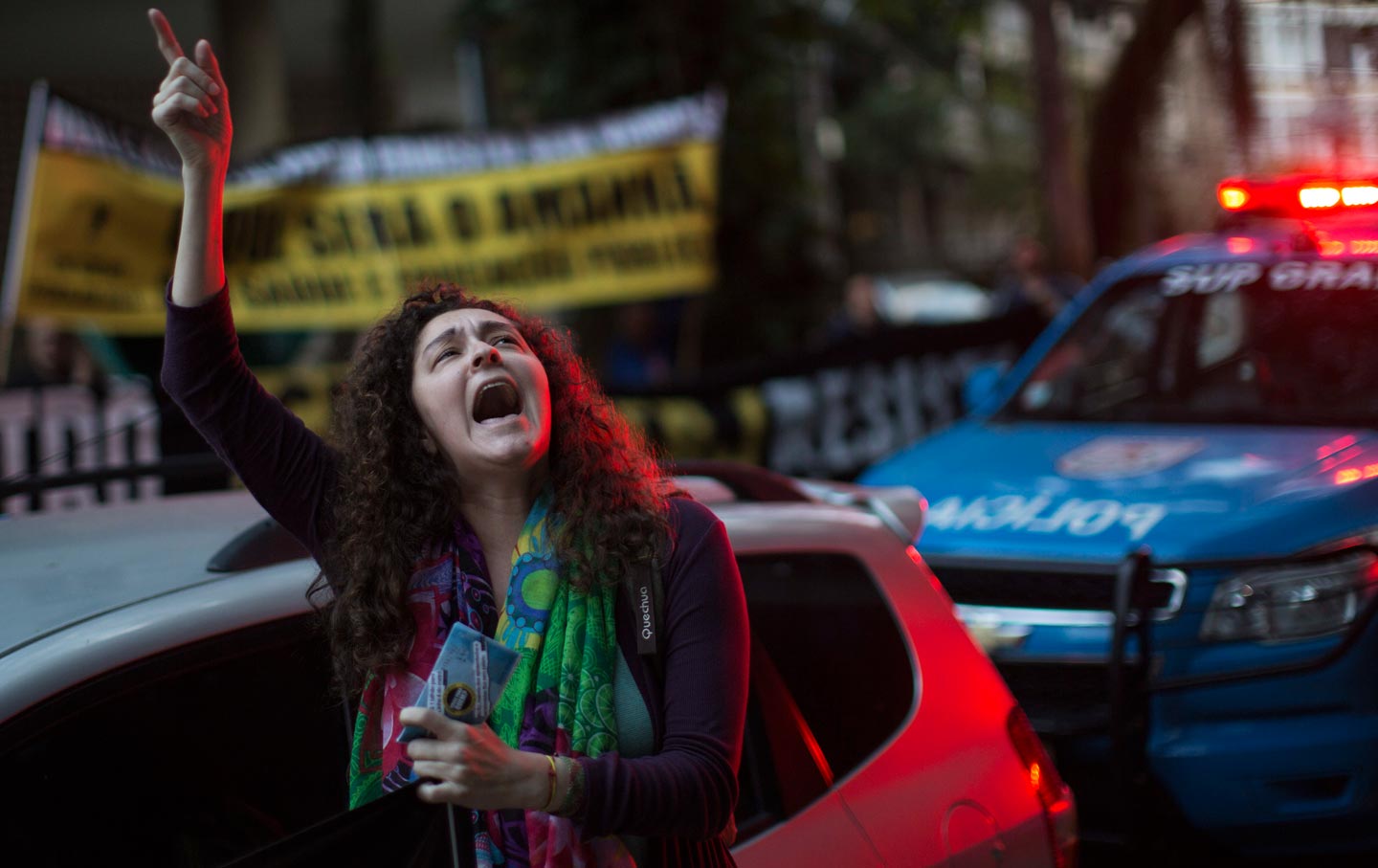 In the shadows of both the 2016 Rio Olympics and a political impeachment/coup that rocked the world, a struggle took place in Brazil with more resonance than either of these events, if people only knew that it happened. Just beyond the city’s northern borders, a five-month strike by public-school teachers ended only last month, just in time for the games to begin.

Of 166,000 teachers, 70 percent went out, confronting violent police repression in an effort to win a raise and confront unendurable working conditions that produce student-teacher ratios of 50-1.

What made this strike so remarkable was that it did not end on a picket line. Dozens of schools were occupied by teachers and students and for months, where they staged their own classes while union leaders negotiated their futures and the police knocked down their doors. I spoke to three teachers in Rio: Marilia El-Kaddoum Trajtenberg, Raphael Mota Fernandes, and Eduardo Moraes, two of whom were a part of these occupations, all involved with the union.

Their story is not only a labor battle of note. It demonstrates the ways that funding the Olympics starved parts of Rio and provoked unforeseen consequences.

These educators are clear that what made these strikes special were the occupations. Raphael said, “In total, there were 81 schools that were occupied in the state of Rio. The idea started in São Paulo, but we made it ours. There were a lot of activities that we organized. We held debates about current issues, about racism, politics. We opened the libraries, held cultural events, and the schools became what they were supposed to be; cultural centers for the community. For students in their final year, we held classes on the Vestibular, a test that is similar to the SAT, but worse: Your entire university application process rests on this test.”

As these occupations continued in schools starved of funds, the priorities of the multibillion-dollar Olympics were never far from their minds.

“Both within the occupied schools and within the teacher’s strike, we were very cognizant of it all. It was really…disturbing to see billions spent when schools don’t have proper sports equipment, don’t have materials, don’t have hot food for students. Instead, they are just investing in this big party that will be gone in a month.”

The police violence against the teachers was very intense. Eduardo told stories of being beaten on the picket lines. Another teacher, Luciano, who was supposed to join us, was still bed-ridden from an encounter with police. Several teachers were “almost killed.”

Marilia said that the fact that they were “almost killed” counts them as lucky. “We as a social movement face repression, beatings, and gas. But you have the police killing a lot of people in the favelas, especially young black men. Rio de Janeiro state police alone have killed more people than the entire American police. We teachers are used to the violence, but it’s not as hard as what poor people face on a daily basis. Clearly, the police are much more violent in the favelas.”

Even more disturbing than street violence was the legal monitoring of their union meetings by uniformed police, a feature of the country’s new anti-terrorism law. This has an ugly echo of the past. “Here in Brazil, under the dictatorship, unions were overseen by the state,” Eduardo says. “Since the ’80s with the fall of the military dictatorship, for unions to gain independence from the state was a great victory. Now the police have been allowed again because of anti-terrorism law. It’s very troubling. It brings back memories of the dictatorship.”

The end of the strike was bittersweet. The teachers did not win their wage increase, but still pushed the struggle forward in other ways. As Raphael said, “In this climate, for the teachers to be on strike, it was a very historic moment even if it was difficult at the end. The main reason that we entered the strike was for raises and that was something that we weren’t able to win. The second great loss was that we didn’t get any more time in preparing for classes.”

Yes, they fought police in the streets for an extra planning period. But they also won two things that teachers in the United States should take note of.

“We were able to win a reduction in the work week for non-teaching staff from 40 to 30 hours per week. Also, we can now elect our principals.”

You read correctly: Students, parents and teachers can currently elect the person in charge of the schools. Eduardo said, “The importance of electing our principals cannot be overstated. When principals are elected by their school community, they owe the community, not the government.”

As for the Olympics taking place while we speak, Marilia said, “Brazilians are of two minds. There’s the disapproval of the event, not of the sports. People are supporting the sports, but when you are living here in Rio, things have gotten more expensive. It’s very difficult to be living in the city at the moment and coupled with all of the problems that the city is facing. But Brazilians do have this ability to differentiate between the games and the sport and what’s happening.”

They also recognize the inspiration of people like Rio’s own judoka gold-medalist Rafaela Silva. “When the Brazilian men’s soccer team was playing in the World Cup, they had a ton of sponsorship from several companies, even when they lost badly. But when you look at someone like Rafaela Silva, she has so many difficulties to get any sort of sponsorship. When Rafaela wins, it’s like she even beat the companies because she did it without the corporate support.”

I asked if they had any messages for teachers in the United States facing very similar issues to the ones they face.

“I would say that only struggle changes lives,” said Eduardo. “The only way for them to overcome the issues that they face over there, which are similar in some ways to ours, is to organize and to get involved and participate in the struggles of education for the whole society.”

Raphael Mota Fernandes: “These strikes, even though they are difficult, are part of a process. If we don’t fight for our rights and if we don’t organize, we’re not going to get any of victories. So my message for them is to fight for what they want. When any union, it doesn’t have to be a teacher’s union, in the US strikes, we will send a letter of support. Just ask.”

Eduardo jumps in to say, “What happens in America effects the whole world.… I don’t remember the woman’s name, but I always use the work of this woman in the United States who initially supported standardized testing and is now against it and trying to keep it out of US schools.”

He is speaking, we quickly realize, about Diane Ravitch.

Raphael then says, “The systems of education permitted in America, like standardized testing, are being copied by Brazilians, so when you guys are fighting against those policies over there, you are helping us too.” Teachers of the world unite. You have nothing to lose but standardized testing. Or as Marilia said,”I would only express my deep solidarity because your struggles is our struggle, and our struggle is also yours.”