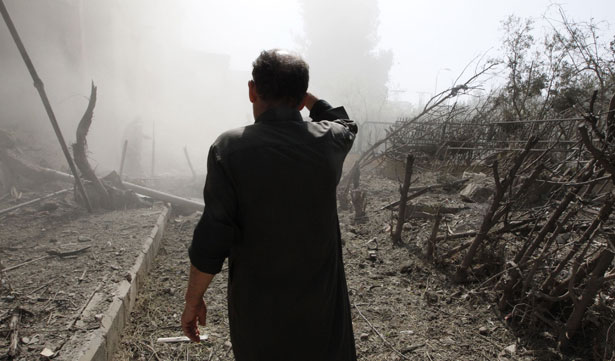 It’s ugly in Syria and Iraq (and, as we shall see, the Obama administration seems to want to make the war in Syria worse), but there’s been some good news out of Syria this week: the joint US-Russian plan to remove and destroy Syria’s chemical weapons stockpile has worked—to the chagrin, no doubt, of the hawks and neoconservatives who said it wouldn’t. We’ll wait for their apology, right after they apologize for the war in Iraq.

Here’s an excerpt of the press release from the Organization for the Prohibition of Chemical Weapons (OPCW), which was charged with the task:

A major landmark in this mission has been reached today. The last of the remaining chemicals identified for removal from Syria were loaded this afternoon aboard the Danish ship Ark Futura. The ship made its last call at the port of Latakia in what has been a long and patient campaign in support of this international endeavour. … The mission to eliminate Syria’s chemical weapons programme has been a major undertaking marked by an extraordinary international cooperation. Never before has an entire arsenal of a category of weapons of mass destruction been removed from a country experiencing a state of internal armed conflict. And this has been accomplished within very demanding and tight timeframes.

In an editorial titled “They Said It Couldn’t Be Done,” The New York Times says:

Less than a year ago, President Bashar al-Assad of Syria and his forces were sporadically using chemical weapons on rebels and civilians in the civil war. Today, the stockpile that he grudgingly admitted to under international pressure is gone. … President Obama’s critics excoriated the deal, but they have been proved wrong. The chemical weapons are now out of the hands of a brutal dictator—and all without firing a shot.

The Iranians, [Sigrid Kaag, who heads the joint mission of the United Nations and the OPCW] said, provided technical advice. “They obviously lived through a terrible chemical weapons experience themselves,” when the Iraqi forces of Saddam Hussein made liberal use of chemicals during the 1980s Iran-Iraq war. “They see themselves as quite committed to eliminating the use of chemical weapons anywhere. “They’ve also been helpful to us in contacts with Syrian authorities . . . in amplifying our messages, validating our approach,” Kaag said.

Some of the idiots who said it “couldn’t be done” include Yochi Dreazen of Foreign Policy, former Senator Jim Talent of the Heritage Foundation, neocon scribbler Peter Feaver, right-wing Senator John Barrasso of Wyoming, the reliable neoconservative skeptics at the editorial page of The Wall Street Journal, Iraq war architect Douglas Feith, the usual suspects at the “thinktank” called the Foreign Policy Initiative (Bill Kristol, Robert Kagan, Dan Senor, Eric Edelman) and, well, you get the idea.

Meanwhile, weirdly, Secretary of State John Kerry seems intent to sending more aid to the supposed moderates of the rebellion against President Bashar al-Assad. The right strategy, given that the anti-Assad Islamic State of Iraq and Syria (ISIS) is gobbling up territory in both countries, would be halt aid to the anti-Assad forces, since that would free up Assad’s military to go after ISIS in northern and eastern Syria. But, as the Associated Press reports, the Syrian “moderates” are hopelessly disorganized and outgunned. The Los Angeles Times reports “deep divisions, clashing rivalries and considerable disarray within the Syrian National Coalition.” Are you listening, Mr. Kerry? It’s time to surrender in the Syrian war.