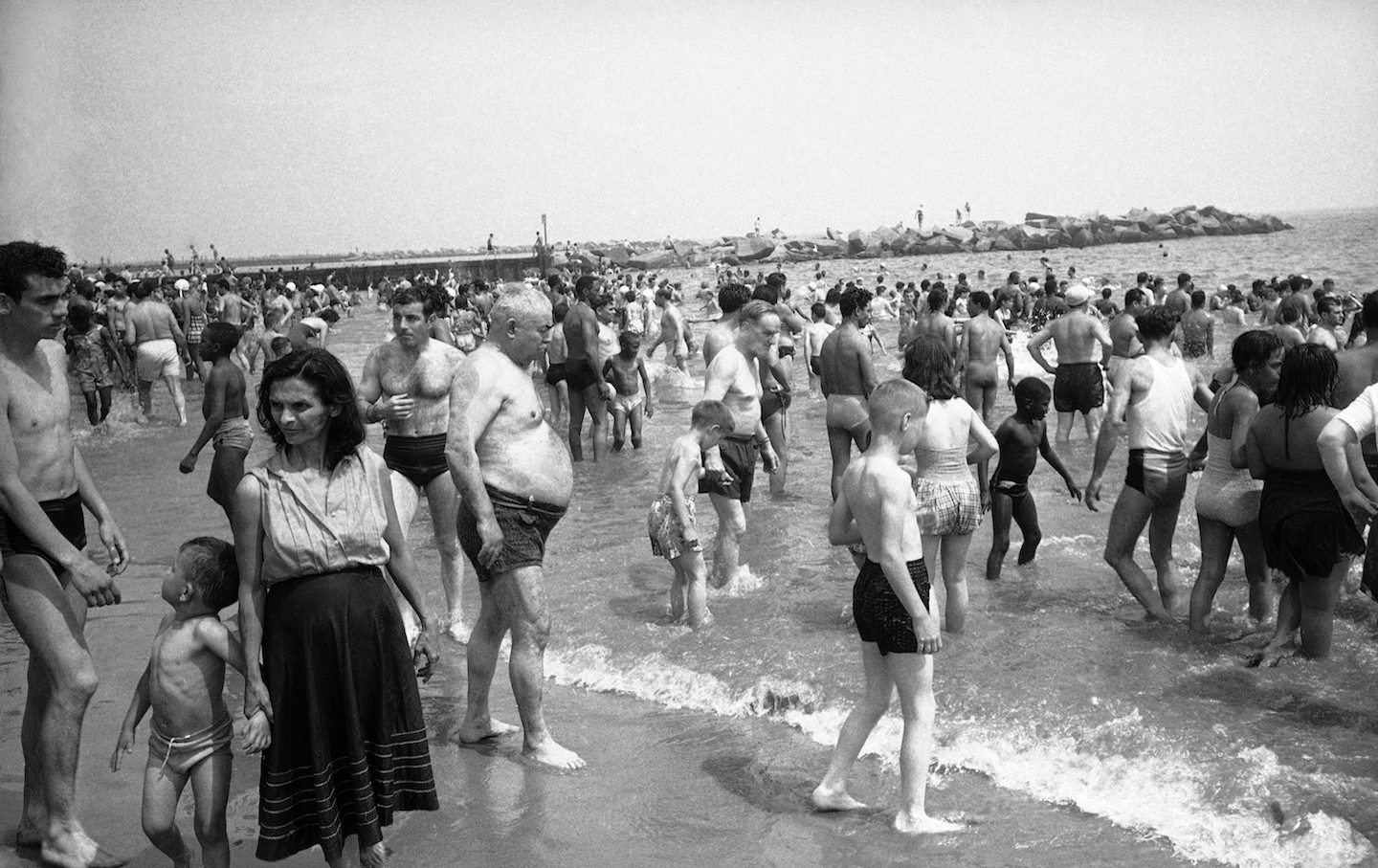 Say a girl drowns. It’s summer, and the beach is crawling with tourists. But the girl who dies is a local, and the only ones who were there when she died were vacationing boys from out of town. The girl was drinking with them at the time, and the boys say her death was an accident. She had one too many, and fell into the water—there was nothing they could do. That’s the story they tell the next day, voices muddy with tears. Would you have any reason to believe them?

That’s the question Susan Steinberg poses in Machine, her debut novel, which follows a teenage girl contending with the implications of this death amid the dissolution of her parents’ marriage. The dynamics at work here—familial collapse, inscrutable masculinity, youthful alienation—are familiar from Steinberg’s earlier work, three collections of trailblazing short stories written in anxiously burbling prose. With Machine, those ideas are endlessly reiterated, accruing into a landscape as transfixing as it is repellent.

The characters in Machine, as in all of Steinberg’s work, are nameless, as is the setting. The narrator is the daughter of a wealthy man, the sort who every year shuttles his family from “the city” to “the shore” once the weather turns warm. The narrator knows she’s “part of a demographic” of private-school girls at the top of their classes—“girls who stay at the shore all summer and become the stars of the shore.” The girl who drowns, on the other hand, is a beach-going townie. The narrator reflects, “she wasn’t that bright, my father said; so there was no one to blame, he said, for her downing, but her.”

Steinberg’s narrator isn’t so sure. The scenario, as described by the men in her life, is of a girl who got “too fucked up” and fell down, the sort of event that sounds to the narrator less like reality than “a movie of guys talking about a girl.” She muses that although the girl’s death might have been an accident, it is just as likely that it was her brother—one of the male revelers who are now pleading innocence—who killed her. Perhaps, she thinks, the truth is that he “just lost his shit, that he pushed her in, that he held her under.” Far from being some kind of pro forma mystery novel concerned with solving the puzzle of how a local girl died, Machine allows Steinberg to excavate the more insidious ways the language and codes of maleness shrink the lives of women into dispensability.

Sinister fraternity is everywhere in Machine, most conspicuously in the narrator’s own family. Her father takes her brother on regular walks in order to teach him “about things that were guys-only things, like for instance girls and ways to manage girls.” That includes the narrator. After she walks in on her father and a lover, Steinberg uses rapid-fire clauses to efficiently capture the father’s gaslighting in action: “I swore to my father I wouldn’t tell my mother what I saw; what my father said I thought I saw; what my father said I didn’t see.”

Seeding semicolons like this is one of Steinberg’s stylistic signatures, and in this case it is leveraged to exemplify the pummeling diction men use to exert their will. Indeed, her prose is only rarely packaged into traditional paragraphing; more often, it takes the form of a succession of clauses that either cascade down the page or are spackled together in blocks. This renders each segment legible as both an independent statement and the continuation of a thought—an effect that could be achieved with gradually unfolding sentences as well, but with nowhere near the immediacy Steinberg is able to achieve. In the opening to “Underfed,” one of the stories from her 2013 collection Spectacle, the technique allows for an arresting merging of image and feeling:

The staccato of semicolons slides into the methodical rhythm of commas, allowing for a parallel transition from reality into a daydream of intermingling bliss and terror. In Machine, such passages carry a more emphatic charge. Mimicking the reprimands that “the stars of the shore” hear from their parents after the local girl’s death, Steinberg writes:

Steinberg moves from the exhortations of a male “they” to the snide reply of a woman (“good enough… to what?”) in a split second. In the next moment, she is picking up an image from earlier in the chapter, of her narrator violating her parents’ prohibition to visit the dock where the girl died and refiguring it into an intimate-feeling scene of women invading male space, even without knowing what to do once they’ve arrived. The voice in this short section shifts from authority figure to pugnacious teen to melancholy kid just looking for something to do. “One night, we waited for the sunrise;” Steinberg goes on, “not for any reason other than we were up and it was next.”

Though this associative approach gives Steinberg’s work an undeniably experimental flair, it is hardly tiresome to read. Her prose is urgent and fluid, propelled by grammatical tension that transforms any odd pair of clauses into a flint and a stone—sometimes they grind together in subtle variation, and sometimes they spark into something new. The reader, unsure of which result to expect, is driven to attend to each word as if it might suddenly catch on fire.

In the story “Underthings,” Steinberg’s narrator is hit in the face with a book by her boyfriend. The strike is the result of his emerging out of a night terror to the sight of her standing over him holding said volume. Afterward, the narrator reflects on that moment before he rose in violent fear:

The narrator of Machine toys with the same concept. What, she wonders, is it about being a man that allows her father to run over a dog and then convince the owner she’s at fault? When the narrator’s brother briefly goes missing on a binge, his friends don’t look for him. Instead, they “make it into a joke how they often do with things that make them feel,” leaving the narrator confounded. For all her other talents, Steinberg is foremost an interrogator of maleness, her female gaze laying bare its anxieties, contradictions, and insecurities even as it is battered by the sometimes-fatal consequences of making men feel.

By the end of Machine, the narrator is no closer to finding clarity about the death of the local girl. “This is a story about context,” Steinberg writes, “About things being out of context. There’s no closer read to do than that.” The narrator and a female friend from the city invent a game where they stand at the end of a jetty and invite boys to watch as they try not to fall in. “They watched us until they got bored,” Steinberg writes, “and you never got used to their boredom.” The narrator takes the boys’ growing indifference as fuel to redouble her efforts:

I was already done with the game, but I deep down also wanted to win;
This is the definition of privilege;
To think you can have it both ways;
And to think you can;
Well, you fucking can’t;
When I screamed, it was just to speed up the game;
It was just to get attention;
I screamed, I’m taking off my shirt;
I wasn’t taking off my shirt;
But now the guys were watching again;
And the girl was laughing at what I said;
I guess I knew she would laugh;
But I didn’t think she would fall;

Steinberg’s narrator takes the local girl’s death not so much as a cautionary tragedy as an implicit threat that can be leveled, a way to use men’s power against them in a dubious attempt to equalize her stature. Elsewhere in Machine, the narrator admits, “to the guys, I like to seem small and weak; to the girls, I like to seem something else; to the girls, I like to seem terrifying; like a supernova; like the ends of their sad little worlds.” In that moment, when she is teetering on the levy with her friend, making her companion laugh so hard she falls—and thus takes on the role of the local who died, rather than the visitor just having fun—the narrator is “feeling like a guy.”

“Some nights, I sank too,” the narrator concludes. “Those nights, I sank like a stone. And I stayed at the bottom for as long as I could. I stayed there, waiting for something.” This, I guess, is feeling like a girl. The guy gets to teeter on the rocks, drawing all eyes; the girl vanishes beneath the surface. One need look no further than Steinberg’s narrator to realize that such essentializing of the genders has its limits. Yet by stripping away the specifics of her characters—their names, their occupations, their locations—Steinberg draws focus instead to the disempowerment women are expected to tolerate in order to prop up the men around them. A girl dies; men shrug; life goes on. Steinberg’s work is stark, but that starkness is revealing. Machine is less a novel than a parable, one to be acted out again and again while women shake their heads in glum recognition and men plod along, indifferent.