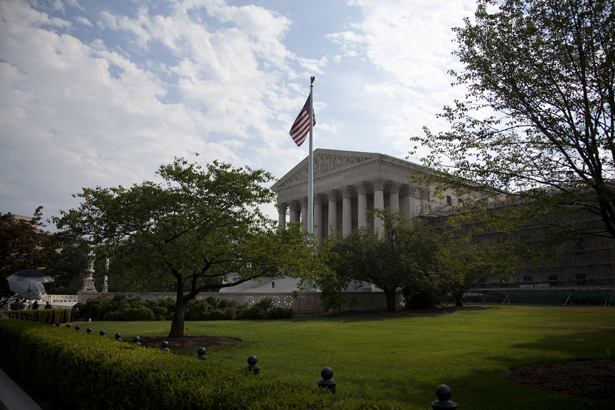 The Supreme Court reached into the living rooms of homebound people with disabilities today and weakened the institutional backbone of public sector unions. At the intersection of public service and private capital, the case Harris v. Quinn was ostensibly about the cost of union dues, but hinged on a legal theory that could ultimately cost the labor movement far more.

Though the decision was not as broad as labor groups had feared, it strikes hard at the concept of “fair share”—the idea that workers in a union shop should be expected to contribute to the running of the union. The Court has previously upheld this concept on the premise that because everyone in the workplace benefits from the collectively bargained contract—including negotiated wages, work rules, safety standards and benefits—financially supporting that representation should be mandatory.

The workers in Harris aren’t typical government bureaucrats; they are homecare assistants with Illiinois’s Medicaid-funded in-homecare program, serving thousands of people with disabilities. After being authorized to vote to unionize with SEIU years ago, this workforce became a relatively recent addition to Illinois’s public sector. In many other states, home health attendants not only lack union coverage; their jobs are precarious, low-paid and disproportionately done by women and people of color.

The plaintiffs represent a group of workers involved in a later vote that ultimately rejected the union. They brought the suit on the principle that fair share, or what conservatives call “forced unionism,” when imposed on workers regardless of whether they personally favor a union, violates their free speech rights. This argument folds into a broader assault on public sector unions led by the group backing the plaintiffs, National Right to Work Legal Defense Foundation (NRTWLDF). The group advocates for “right to work” laws (already in place in twenty-four states) that undermine labor by barring “closed shop” unions that provide blanket union representation. In its sweeping focus on public-sector unionism (specifically targeting SEIU and AFSCME), the Harris plaintiffs aimed to overturn Abood v. Detroit Board of Education (1977), which upheld collective bargaining rights and dues collection for public-sector unions.

In oral arguments, the NRTWLDF argued that by forcing workers to pay dues, public sector unions were effectively forcing them to engage in political activity, and, as SCOTUS Blog explains, that collective bargaining over wages and benefits is tantamount to endorsing “the union’s public policy ambitions.” (Critics point out that collective bargaining is standard procedure for a large, organized workforce, and besides, political union activity is governed and funded separately.)

The decision, penned by Justice Alito and generally reflective of his anti-labor views, could have gone broader by invalidating fair share for all public sector workers. Today’s ruling, as Tom Goldstein of SCOTUSblog summarizes, was not that extreme and did not completely overturn Abood, though it left the door open to do so in a future case: “today it has refused to go that far. The unions have lost a tool to expand their reach. But they have dodged a major challenge to their very existence.”

Ultimately the court ruled more specifically against fair share for what it oddly termed “partial public employees,” pointing out that the homecare workers were unique because their public service job provides personal care under a federal program, and “are almost entirely answerable to the customers and not to the State.” In contrast to other civil servants, “the customer has virtually complete control over a personal assistant’s work,” so the union’s power is limited. But in a portent of future anti-union rulings, the majority outlined what it saw as outstanding constitutional problems in Abood, contending that the earlier precedent “failed to appreciate the conceptual difficulty of distinguishing in public-sector cases between union expenditures that are made for collective-bargaining purposes and those that are made to achieve political ends.”

In her dissent, Justice Kagan argued sharply that the mixed ruling created an unnecessarily complex new category and weakened the ability of a program to manage its labor relations rationally. “The Court did not, as the petitioners wanted, deprive every state and local government, in the management of their employees and programs, of the tool that many have thought necessary and appropriate to make collective bargaining work,” Kagan wrote. But at the same time, “the majority robbed Illinois of that choice in administering its in-homecare program.” Abood had provided “a stable balance—consistent with this Court’s general framework for assessing public employees’ First Amendment claims—between those employees’ rights and government entities’ interests in managing their workforces.”

The ruling claws back on the real material gains that collective bargaining won for homecare workers. Outside of Illinois’s state program, workers in the sector typically earn around $20,000 per year and suffer tremendously stressful, often exploitative working conditions. Only last year did they officially become eligible for federal minimum wage and overtime rules, following a hard-fought campaign by domestic workers’ advocates to end the Labor Department’s longstanding exemption for homecare providers.

Illinois health aides, by contrast, made real progress after joining SEIU as direct employees of the state. Part of a national campaign to unionize the sector, the workers collectively bargained for higher wages and labor protections typical of union workers but long denied to other health aides, including health benefits and training.

The Harris ruling has troubling parallels with today’s other bombshell decision in the Hobby Lobby case, in which the religious right attacked contraceptive coverage under the healthcare reform law. Both cases misleadingly pit collective rights against a reactionary concept of private liberty. Intriguingly, both today’s decisions relate to the rights of women at work. And both relate to public health for the most vulnerable. Sarita Gupta, executive director of Jobs with Justice, said in a statement that the Harris decision “serves the interests of anti-worker extremists at the expense of these invaluable workers who care for our families and our children.”

Though the ruling was not as extreme as right-wing activists had hoped, the right-to-work movement successfully used private rights as a legal cudgel against core public institutions. The court has stepped on the rights of women, workers, the poor and people of color, to hand more of the public trust over to corporate hands.