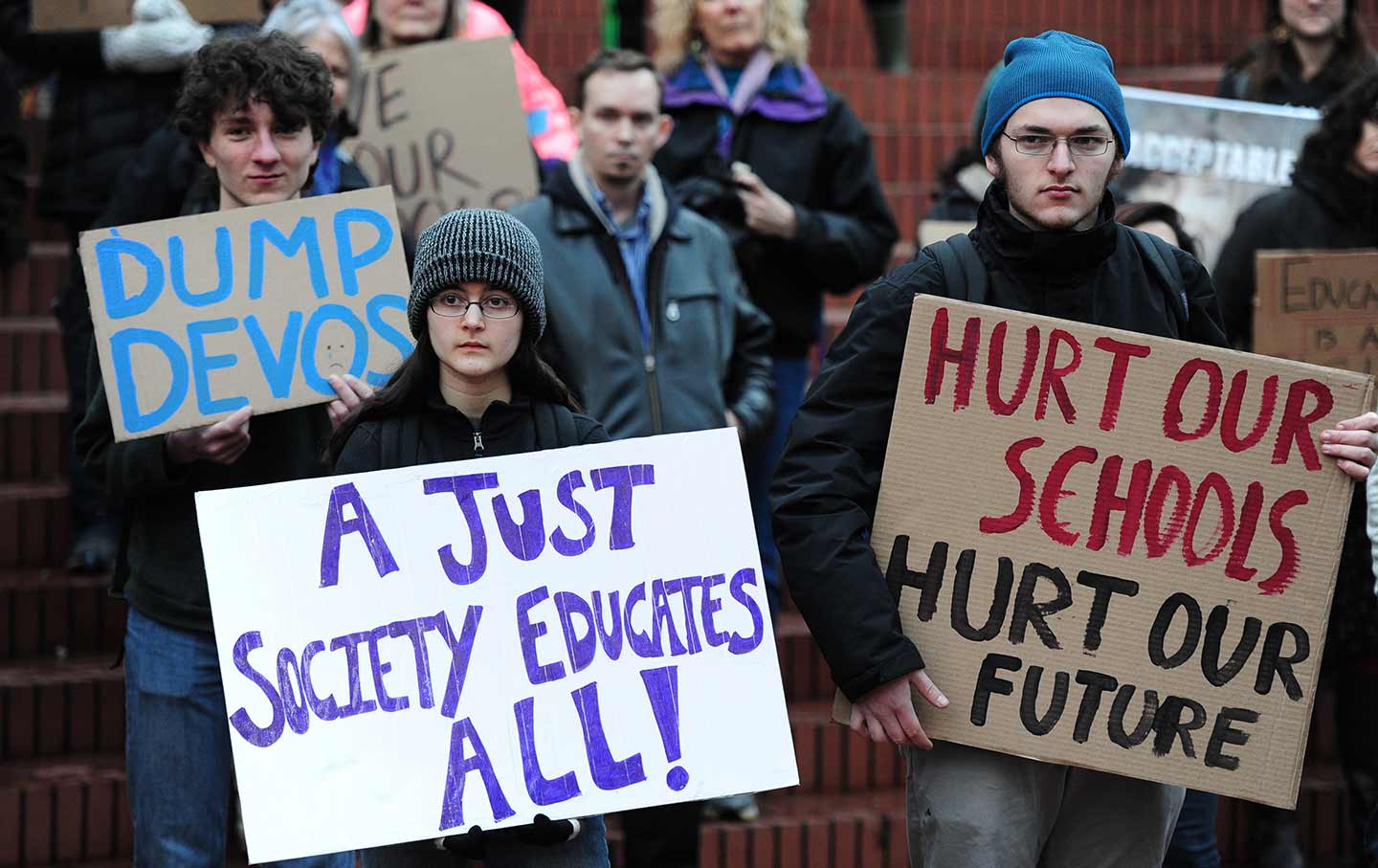 Betsy DeVos, President Trump’s pick for education secretary, was approved yesterday by a 12-11 party-line vote by a Senate committee after a contentious hearing in which her qualifications were sharply questioned.

DeVos and her family have used its ultra-wealth to push charter schools, vouchers, and for-profit colleges; she’s fumbled or shirked questions about civil rights; she’s suggested that guns in schools could help ward off bears; and the list goes on. Now there are charges that one of her written answers to questions posed by senators appeared to be plagiarized from a statement made by a member of the Obama administration.

Senators have received tens of thousands of calls to vote “no”—more, according to some sources, than for any other cabinet nominee. The resistance has made an impact—because of ethics concerns, the Senate HELP Committee pushed back its vote on whether to recommend her. In this post, students from four groups detail why, and how, they’re fighting DeVos’s appointment. This post is the latest edition of The Nation’s student and youth organizing feature, edited by James Cersonsky (@cersonsky).

by Maddy Moore and Mahroh Jahangiri

As students and anti-violence organizers, we hear every day from the one in five students who are sexually assaulted during their time on campus. Though every experience is different, two themes stand out: Student survivors, especially those who are queer, undocumented, or people of color, do not feel safe reporting to the police; and Title IX provides a desperately needed alternative to help them stay in school.

Title IX mandates that schools prevent sexual harassment and violence on campus and, when violence occurs, support student survivors in continuing to access education. Given that schools routinely ignore these obligations, the Department of Education’s work has been essential in holding schools accountable and ensuring that students know about—and therefore, are able to advocate for—their rights.

At Georgetown University, for example, students used pivotal guidance from the department, which clarified schools’ longstanding obligations under Title IX, to push Georgetown to do better. In response to student organizing and federal pressure, the university hired a full-time Title IX coordinator, guaranteed interim accommodations for survivors—such as an extension on a paper due the week after an assault—and created fair processes for victims and the accused. These changes made an measurable difference in the lives of student survivors; for many, this is what kept them from dropping out of school.

In her Senate hearing, DeVos said it would be “premature” to enforce this decades-old civil-rights law—threatening to put young people’s safety at risk and undermine our access to education. If DeVos revokes the department’s critical work, we risk returning to the days when students did not know their rights—and schools regularly violated them.

To make sure this doesn’t happen, Know Your IX, End Rape on Campus, and survivors and allies across the country have joined the #DearBetsy campaign. We’re petitioning, writing, and attending Senate hearings to demand that DeVos commit to enforcing the law—and to remind senators that unwillingness to protect the civil rights of sexual assault survivors is disqualifying.

2. Detroit Is (Still) Not for Sale

On January 18, 120 of us drove from Detroit to Washington, DC, to attend Betsy DeVos’s confirmation hearing. We arrived at 5 am, slept for two hours, and awoke with excitement to have our voices heard, finally, at Journey for Justice’s “Dump DeVos” Day of Action. We arrived at the hearing seven hours early and were surprised to find 40 black men already standing in line. We learned later that they’d been paid $35 an hour to hold spots for white attendees—a painful reflection of the way our elected officials treat us like props.

DeVos pushes an agenda that benefits her financially, while paralyzing us academically. She has derailed public education in our city and fought aggressively to keep charters free of accountability. In June and July of 2016 alone, she spent $1.45 million lobbying for charter schools not to have local oversight, for uncertified teachers to be allowed to teach in Detroit, and for closing schools in the bottom 5 percent for three consecutive years, creating mass dislocation of students.

This spring, we’ve started a petition campaign to fight 25 schools that are threatening to close in our city. Long-term, we’re demanding full funding for our public schools and oversight for charters—which starts with dumping DeVos and her policies.

3. Free and Accessible College for All

The United States Student Association, the nation’s oldest and largest national student organization, believes that education is a right and should be accessible to all regardless of race, class, gender, sexuality, socioeconomic status, or ability. Not only does DeVos’s record stand in stark contrast to our values—her family has contributed millions of dollars to anti-LGBTQ organizations; many of her proposed policies would disproportionately harm students of color; and she won’t rule out defunding public schools—it’s unclear what her appointment would do to gains we’ve made. USSA has organized tirelessly for free public college and the expansion of Pell Grant awards, pushing President Obama to expand the Pell while he was in office.

During DeVos’s confirmation process, USSA has been organizing a national social-media campaign prompting students across the country to share their concerns in videos, pictures, and messages on Facebook and Twitter. We’ve also worked with student leaders and statewide student associations to organize call-in days urging senators to vote no on her confirmation.

On January 18, the day of the confirmation hearing, USSA, Higher Ed Not Debt, and Student Debt Crisis delivered 70,000 signatures to the office of Senator Lamar Alexander, chair of the Senate Health, Education, Labor, and Pensions Committee. There, dozens of students staged a direct action outside the hearing, marching through Senate offices with signs while chanting, “Stop DeVos!”

One of the main reasons I was able to graduate from high school is the communication and one-on-one time I had with my teachers. I was often too shy to ask questions in class, so I wrote down my questions and approached my teachers after class or after school. Now, unless we change a racist, corrupt system that sets us up for failure, my younger family members won’t benefit as I did.

DeVos supports investment in charter schools. What does this mean for us? First, it means less money for public schools, larger class sizes, and less individualized attention for people like me. Charters also have a record of pushing out students who’ve experienced academic difficulties and funneling students into the school-to-prison pipeline.

Power U Center for Social Change, a member of the national Dignity in Schools Campaign, has been organizing to dismantle the school-to-prison pipeline in Miami. Last year, we won our campaign to implement restorative-justice programs in our schools. Now, we’re flooding Senators Marco Rubio and Bill Nelson with calls imploring them not to confirm DeVos.