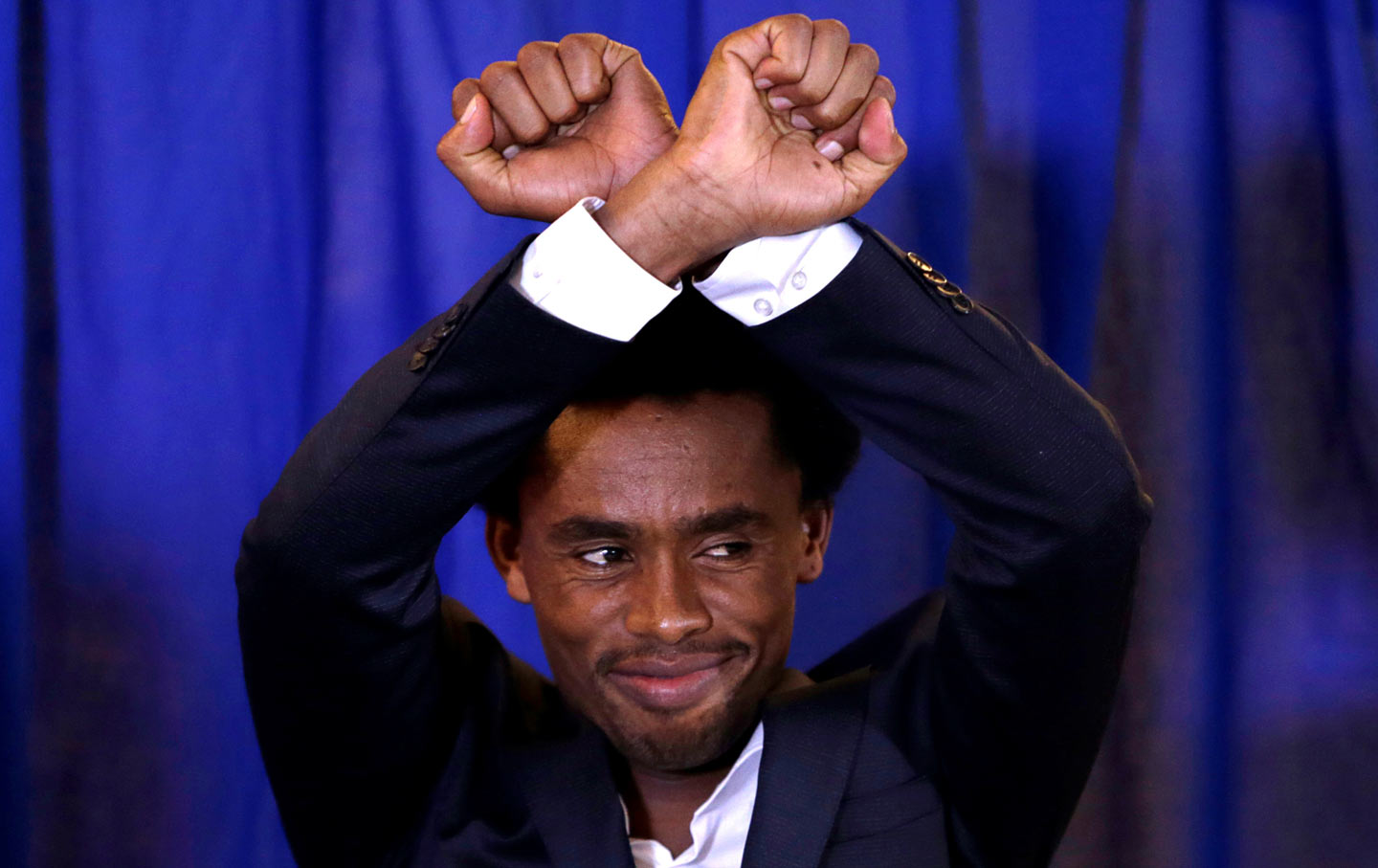 As discussion swirls around sports and politics in the National Football League, one political athlete who trains far from the stadiums of the NFL is risking not only his career but also his life. At the 2016 Rio Olympics, Ethiopian runner Feyisa Lilesa won silver in the marathon and, when he crossed the finish line, threw his arms up in an X, his fists clenched. He did it again on the podium and again at the press conference following the race. The “X” was a symbol of defiance and a statement of solidarity with the masses of Oromo people being displaced from their homes and farms in order to expand Ethiopia’s capital city of Addis Ababa into Oromia.

Beginning last December, Ethiopia’s government has uprooted thousands of Oromo people, yet they are fighting back with widespread acts of resistance such as strikes, demonstrations, and other forms of civil disobedience. Their protests have been met with brutality. According to Human Rights Watch, 400 people have been killed, thousands have been arrested, and countless others have been “disappeared.”

Now Lilesa is in the United States: still training, hoping to reunite with his family in Ethiopia, and concerned that all of their lives are at risk. Readers can listen to the interview via the link at the bottom of this article. (Thank you to Mohammed Ademo, who provided translation for this interview.)

Dave Zirin: Why did you decide to make that “X” gesture at the Olympics?

Feyisa Lilesa: did it because my people were getting killed and imprisoned. My people were saying we’ve had enough of the killings, imprisonment, and being forced into exile. We’re asking for justice and equality and freedom. I wanted to make sure that the international community got that message.

What was it that pushed you to the point where you felt that you had to do something?

I grew up witnessing the suffering of my people, but in the past nine months, the oppression and the killings got worse. People were protesting. Three months before Rio, when the Ethiopian Athletics Federation told me that I was selected to participate in the Olympics, I made a decision that I needed to make a stand and be a voice for my people. As the killings were happening, I was preparing and planning and training to go to Rio, but because of all the suffering and all the things that were going on around me, my legs were running, but my mind was preoccupied.

I also feared for my life as I was training because I was helping students who were dismissed from university or who were in hiding because they protested and the government was looking for them. The government knew I was helping. I feared that someone could just ambush and come out of a hideout and kill me as I was running and training in the wilderness. So having these fears as I was training, this is when I decided that I didn’t want to continue to live like that and I needed to make a stand.

You mentioned that you helped students and protesters. In what way?

For those who were in jail, I sent them clothes and food. For those on the street who really don’t have anywhere to go, there were times that I gave them money and other things and there were times when I gave my own shoes to people who did not have one pair. So there are different things that I did to help people who needed it, and I was in a position to do that because as an athlete I have a good life.

When you made the gesture, were you conscious in your mind of the history of people who have used the Olympics for protest—people like Tommie Smith and John Carlos who raised their fists in 1968?

I was unaware of it until afterward when someone posted a photo of me next to theirs. They made a collage where mine on the left said 2016 and theirs on the right said 1968. I found out and I learned a little bit about them and I’m happy to be mentioned alongside them.

Now I know that you mentioned after the race that you feared for your own life and the life of your family back home. Do you still have those fears right now?

I don’t feel any fear for my personal safety. I’m in a country now where I have the right to protest and say what I believe, so I don’t have any fears for myself. But the fear for the safety of my family is very much on my mind because they remain in Ethiopia and anything could happen to them.

Do you think, because your gesture got so much publicity, that that can serve to also protect your family because it makes them too high-profile for the government to target?

Yes, that’s absolutely right and I’ve been thinking about that a lot, because if these were just unknown people and my name was not known and the story was not covered, my family would have disappeared without a trace by now. There are people who have been in that position before, that I know.

Where are you currently looking for asylum and if you get asylum will that also allow for your family to leave Ethiopia to join you?

I’m not planning to seek asylum anywhere at the moment and I’ve never dreamed of seeking asylum anywhere. For now, the US government has given me a visa that allows me to continue to pursue my dream, which is running. I haven’t had an opportunity to think about what I want to do about my family, but my dream is to go back and live with them in a better [Ethiopia].

You’re a world-class runner. How difficult is it to train and keep up that pace given all of the political issues swirling around your family and your home?

It is very tough. Looking back now, when I was training, my legs were functioning but my brain, not so much. They were not in sync. I know that if my mind and my legs were in sync, I could’ve bested that record and done better, but that did not happen. I want to continue to push myself hard and to get better and also use this opportunity that was created to continue to speak out. That helps in the sense that I can get some of it off my chest.

I would love to know who are your athletic and/or political heroes. Who has inspired you to both be a world-class athlete and someone who has spoken out about politics?

My athletic hero is the great Abebe Bikila, who ran barefoot in Rome [winning gold in the 1960 Olympic marathon] and opened these opportunities up for people like me to be here. He was our light and he shone a bright light on an Ethiopia that was not as advanced and an Ethiopia that was cut from so much so that he didn’t even have proper running gear. He’s my athletic hero and inspiration.

I know that if Abebe Bikila did not win and make that history and put Ethiopians among the elite runners and inspire the country, I know that I may not be in the position to be a voice for my people and share the concerns and grievances people have with the media and the international community.

Right now there are a lot of NFL players who are protesting against racism and this is a big story in the U.S., so my first question is are you aware that this is happening in this country right now—a lot of athletes protesting?

I heard about it only after I got to the U.S. From what I understand, they are asking for equality and justice and certain rights. Everyone wants these basic human rights, or the respect of these rights, and everybody wants to be equal, and if they have grievances that they want to share, I appreciate the fact that they can share them without any fear and their rights are protected to do that.

Do you feel like you’re in a kinship with athletes throughout the world who use sports as a place to speak out against injustice?

What would you say to anybody who says that athletes like yourself, like Colin Kaepernick in the NFL, should be seen and not heard? That you should just play sports, just be quiet and play.

I could eat and live and count the days and make money and be rich, but if I don’t have freedom, those things don’t mean much. If I, or these people, do not speak up for their rights and for the rights of their people, who’s going to speak up for their rights and voice the concerns that they have as members of society? Who is also going to speak up?