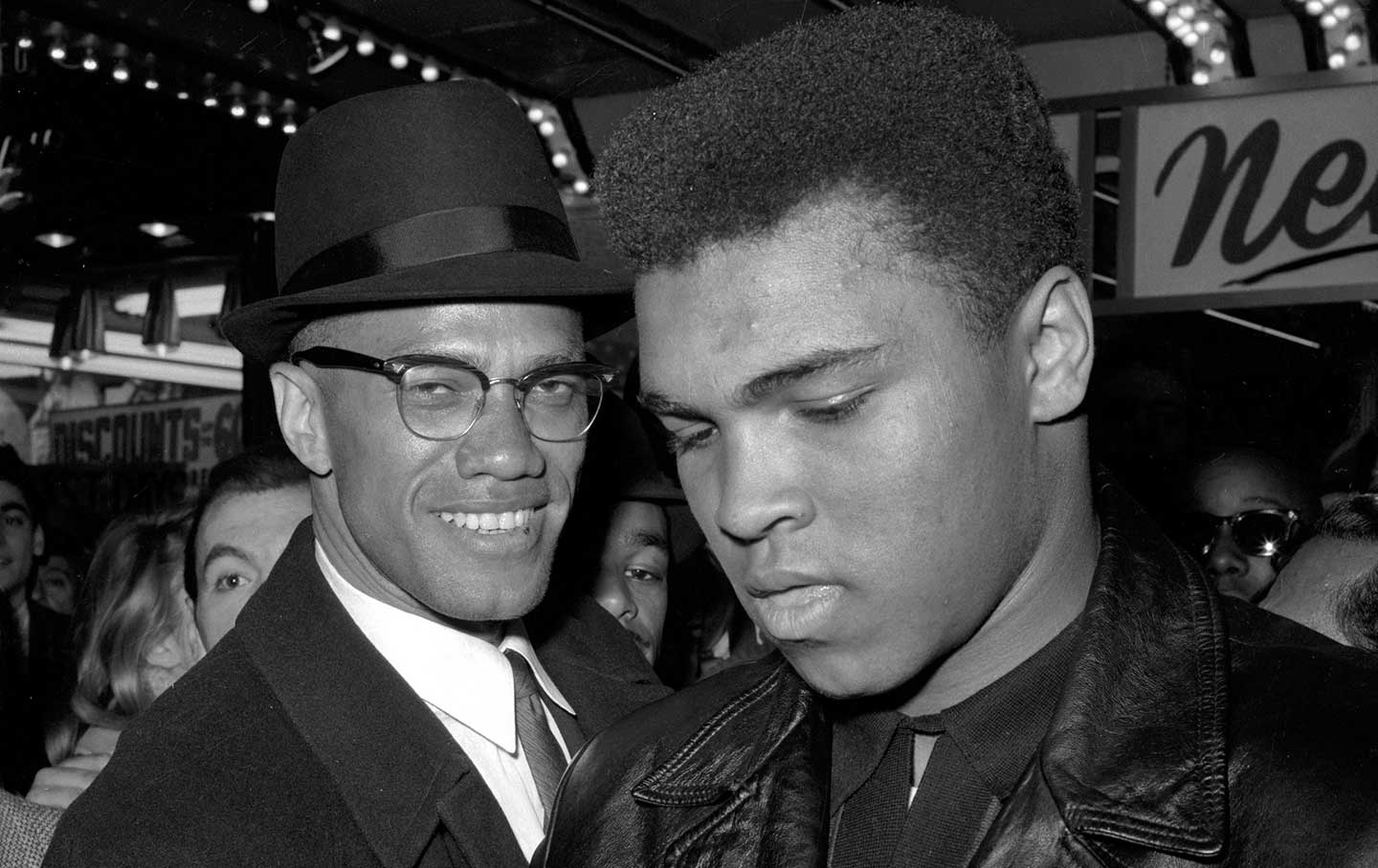 The “what if” discussions are some of the most fun in sports. What if the Chicago Bulls hadn’t traded Olden Polynice on draft day in 1987 for an unknown rookie named Scottie Pippen? What if Dallas Cowboys owner Jerry Jones didn’t fire head coach Jimmy Johnson after two straight Super Bowl victories? These discussions are perfect for a sports column or a debate in a bar: fun and airy with no stakes beyond the joy of speculative debate.1

But if you are going to have these discussions about the places where the sports world and the real world collide, you had better know your history—not only of the athletes but the era—or you will fail your subject and your readers.2

Sports Illustrated’s Richard O’Brien performed such a disservice with a “what if” piece about how history would have been altered if a young fighter named Cassius Clay Jr. had never met Malcolm X. The supposition is that Ali would have still flirted with Malcolm’s black nationalist, separatist organization the Nation of Islam, but would never have joined. He therefore would have never stood up to the war in Vietnam, never would have stayed in the ring too long, never would have gotten Parkinson’s disease, and in this parallel universe, would have retired undefeated, dying at age 100, rich, healthy, happy, and the best of all time.3

What is so wrong about this? Well, everything. Like a circle of stupid, you don’t know where to begin.4

First on the history, O’Brien acknowledges that Cassius Clay first came into contact with the Nation of Islam before he ever met Malcolm, but undersells its influence upon him dramatically. He writes, “Raised in the still-segregated South, taught by his father to fear and distrust white people but imbued with a natural curiosity about the world, Cassius Clay attended his first Nation of Islam meeting in 1960. He was soon a member of the relatively new organization, a controversial offshoot of established Islam. (This was kept quiet, to protect his blossoming boxing career.) It was Malcolm, though, who gave the young fighter a grounding in the true faith, and a sense of where it could lead him, after the two met in ’62.”5

This is misleading. First, Ali’s father taught him more than just to “fear and distrust white people.” Cassius Clay Sr. read the works of Marcus Garvey and his gospel of racial separation and nationalism, teachings that greatly influenced Elijah Muhammad, the founder of the Nation of Islam. O’Brien makes it sound like Cassius Clay Sr. was just muttering, “Don’t trust whitey.” In reality, he was a political actor who had an influence on his son. Secondly, Ali did a lot more than just attend meetings before meeting Malcolm. He was recruited by Nation of Islam member Capt. Sam X of Miami, later known known as Minister Abdul Rahman. His relationship with Capt. Sam lasted for years and involved debate, discussion, and political training.  6

Yes, Ali’s friendship with Malcolm was sincere, deep, and influential. Malcolm undoubtedly shaped Ali in a profound way, and the ending of their friendship was something that Ali described as perhaps his deepest regret. But keep in mind that Ali announced publicly that he was joining the Nation of Islam in 1964, at a time when Malcolm was on his way out of the organization. If Malcolm truly held the sway over Ali that O’Brien surmises, then he would have left with him.7

Yet, let’s suppose for a minute that Ali had joined the Nation directly because of Malcolm’s recruitment efforts. To say it happened only because of Malcolm’s charisma gives short shrift to why the 22-year-old heavyweight champion found a home in this organization. Ali joined the Nation—and was interested in what Malcolm, Capt. Sam, and Elijah Muhammad had to say—because he was disgusted by racism, frustrated by the pace of the civil-rights movement, and believed that the society in which he lived was defined by an intractable white supremacy.

When first asked why he joined, he did not speak about Malcolm. He said, “I ain’t no Christian. I can’t be when I see all the colored people fighting for forced integration get blown up. They get hit by the stones and chewed by dogs and then these crackers blow up a Negro Church…. People are always telling me what a good example I would be if I just wasn’t Muslim. I’ve heard over and over why couldn’t I just be more like Joe Louis and Sugar Ray. Well, they are gone and the Black man’s condition is just the same ain’t it? We’re still catching hell.”8

But what moves the piece from being historically sketchy to something loathsome is when O’Brien writes his obituary for this “alternative life Ali.” It’s an obituary that has him entering the draft and doing USO tours with Bob Hope for the troops, living a long, healthy life and then dying at age 100 in 2042. The implication is that it is only because of the Nation of Islam that Ali opposed the draft and therefore only because of the Nation of Islam that he was stripped of his title, became bankrupt by 1970, fought past his prime, and suffered the brain damage that morphed into Parkinson’s.10

Where to begin? First, on the war, Muhammad Ali did not oppose the draft because he was with the Nation of Islam. He opposed the draft because, as he said, “Why should they ask me to put on a uniform and go 10,000 miles from home and drop bombs and bullets on Brown people in Vietnam while so-called Negro people in Louisville are treated like dogs and denied simple human rights? No, I’m not going 10,000 miles from home to help murder and burn another poor nation simply to continue the domination of white slave masters of the darker people the world over.”11

These ideas in 1968 were hardly confined to the NOI. They were the ideological currency of black revolutionaries and draft resisters—white and black—across the United States. Ali was shaped by Malcolm and he was shaped by the Nation of Islam. But he was also shaped by the reality of the carnage in Vietnam, the movement against the war, and his own principles. (We also know from declassified FBI surveillance files that there were those in the Nation of Islam unhappy with his very public opposition to the draft, but he held firm.)12

Moreover, to blame Malcolm or the Nation for the brain disease that imprisoned Ali’s beautiful mind and voice for the last 30 years of his life borders on cruelty. It is also politically obscene, like saying, “If only there hadn’t been this loud Black Lives Matter movement, then Donald Trump never would have been elected.” It was the US government and the FBI that chose to hound Muhammad Ali for his opposition to their genocidal war in Southeast Asia. It was the mobbed-up world of boxing that stripped him of his title and drove him to bankruptcy, forcing him to stay in the ring and take an ungodly amount of punishment. They are the culprits. Instead of this twaddle, Sports Illustrated should have published a “what if” piece on Ali called “What if the FBI under J. Edgar Hoover wasn’t so racist and vindictive?”13

Also, it must be said that while Muhammad Ali fought for too long to make up for lost earnings, he also loved the cheering crowds, the limelight, and the ring. This idea that he would have left our most brutal of sports with his brain intact is a slap in the face to every fighter who thought they were leaving on time and still found themselves with a crippling brain disease.14

Muhammad Ali—for all of his pain and sacrifice—deserves better than this article. So does Malcolm X. And anyone who cares about how resistance heroes are made deserves a better methodology than what Sports Illustrated has decided to publish.15

Here’s my what-if: If Muhammad Ali had never met Malcolm X, Ali still joins the Nation of Islam, still opposes the war in Vietnam, and is still made to suffer for the sin of being a person of principle in the dirty world of sports. That’s because the struggles of the 1960s were a far greater motor force in the development of Cassius Marcellus Clay Jr. than any one individual. Even Malcolm X.16

In a speech to college students, Muhammad Ali once said, “Everybody knows I’m the champion. My ghost will haunt all the arenas. I’ll be there, wearing a sheet and whispering, ‘Ali-e-e-e! Ali-e-e-e!’” His ghost—the actuality of his legacy and memory—also haunts the decision by Sports Illustrated to publish this piece.17