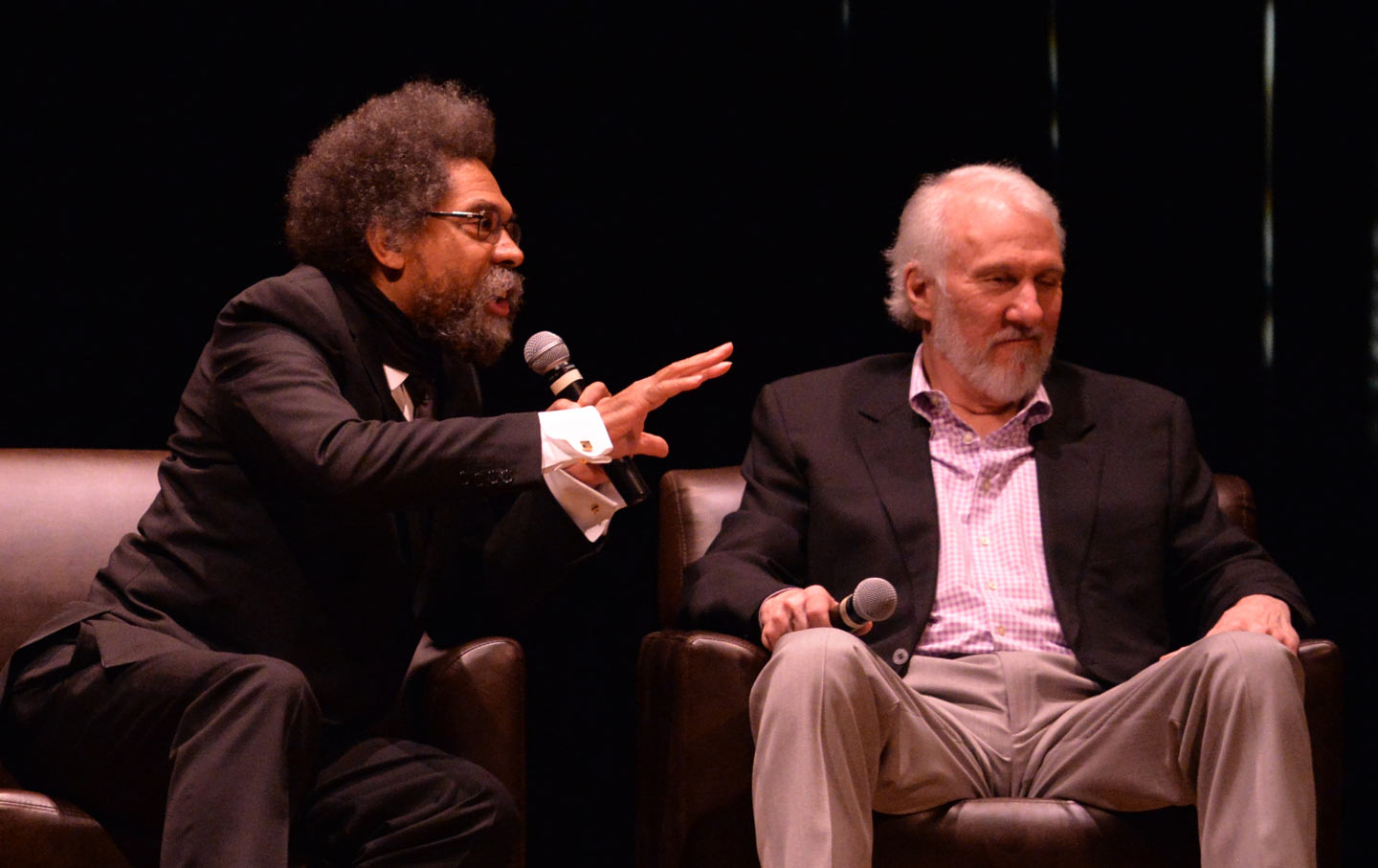 This country is currently rife with crisis and conflict. If you are young, have black or brown skin and are without financial means, the less likely your concerns will be heard. On a Sunday in San Antonio, Spurs head coach Gregg Popovich and Harvard professor and civil-rights activist Dr. Cornel West tried to chip away at that suffocating status quo.

The basketball coach and the author/educator are both renowned in their fields, and yet they’re not necessarily two people we put in the same sentence. But on November 20, Coach Pop and Dr. West sat on a stage at the Carver Community Center and for over two hours they took questions from 250 students who attend Sam Houston High School on San Antonio’s East Side. Also in the audience were the Spurs, the coaching staff, everyone who works on both the basketball and business operation for the team, as well as invitees from the broader community. Somehow, I was the moderator of this event, and it was as unforgettable as it sounds.

For over two hours, the students asked tough questions about the state of the world and their own place within a country that just elected a president who, in their view, seems to hold them in open contempt. Pop and Dr. West answered in kind, without condescension and with straight talk about the importance of education, the state of the world and how these young people could navigate our troubled times.

Pop told the crowd that he wanted to host this kind of meeting because, “I wanted to show you, the students at Sam Houston, that there are people in your community who care and we understand that there are things that have to be fixed and we are willing to listen and participate with you in making that happen.”

The student questions were focused on their own ability to move forward with a sense of optimism and hope given the current state of this country. Coach Pop said, “I think the most important thing is that you can’t do anything by yourself. You have to join together, and be prepared, ready and active.”

Dr. West answered about the importance of students seeing themselves as part of a collective community and not isolated individuals. He said, “Do you respect yourself? Do you have confidence in yourself? Do you believe in yourself? If so, that will enable you to learn how to respect others. And in respecting others, you’ll be able to deal with what is coming at you. But at the larger, institutional level, you’re going to have to learn how to organize, mobilize, and create networks and even movements. You all seen the folks marching on television? Did young people march here in San Antonio? Then you know what I’m talking about.”

Both Pop and Dr. West also spoke with emotion about how important it was for students to know that this wasn’t just a fly-by event but that they would be there to help the Sam Houston community going forward.

A student asked, of course, whether the Spurs were going to win a title, and here was one of the emotional high points of the day. Coach Popovich responded:

“Win the championship? I don’t know, but it’s not a priority in my life. I’d be much happier if I knew that my players were going to make society better, who had good families and who took care of the people around them. I’d get more satisfaction out of that than a title. I would love to win another championship, and we’ll work our butts off to try and do that. But we have to want more than success in our jobs. That’s why we’re here. We’re here so you’ll understand that you can overcome obstacles by being prepared and if you educate the hell out of yourself. If you become respectful, disciplined people in this world, you can fight anything. If you join with each other and you believe in yourself and each other, that’s what matters. That’s what we want to relay to you all: that we believe that about you or we wouldn’t be here.”

Dr. West seemed stunned by Coach Pop’s words and said: “This is what makes brother Popovich not just a great coach but a great human being. There are not that many coaches who would say what he just said. He wants to win a championship, but as a human being, he wants to make sure that all the young people live lives that matter. That’s what it means to be a great person, not just a great basketball player or coach. That’s true for everyone sitting around here. No matter how much money they have or don’t have, it depends on what kind of human being they are. Are they choosing integrity, honesty, and decency or are they choosing trickery? That’s fundamental.”

There were lighter moments as well. At one point Pop and Cornel West engaged in the duet of “Soul Man” by Sam and Dave that probably won’t garner them a record deal. But most importantly what I saw in San Antonio was the shape of things to come: hundreds of engaged young people seeking ideas for not letting this current political moment define the limits of their future.

Cornel West put it in a way the audience—or at least I—will never forget. Speaking about our spiritually adrift celebrity culture and politics, he said, “There’s a difference between a peacock and an eagle. A peacock walks around and says look at me, look at me, I’m part of a spectacle. A peacock struts because he can’t fly. Eagles fly high with nobility. They look concerned with folks who are downtrodden. We need more examples of eagles. And those examples are becoming more and more apparent from the young generation. That’s why I salute you.”

The last words were to Coach Pop, who said, “Hopefully, you all believe in your soul that there are many people who care about you, love you, and know that you have tremendous value. Don’t let anybody take that away from you because the more you believe that about yourselves, the more you can handle whatever comes your way.”

After this event took place, a basketball commentator for ESPN asked me how the organizers of this event “got Coach Pop to do it.” The answer is that no one got Coach Pop to do it. This was his idea. He made it happen in the middle of the season, and the Spurs organization backed him to the hilt. That’s the part of this story that matters. We can all be change-makers, no matter where we work and no matter who we are. We can all take the time to listen to young people and impart the message that the way things are isn’t necessarily the way things have to be.