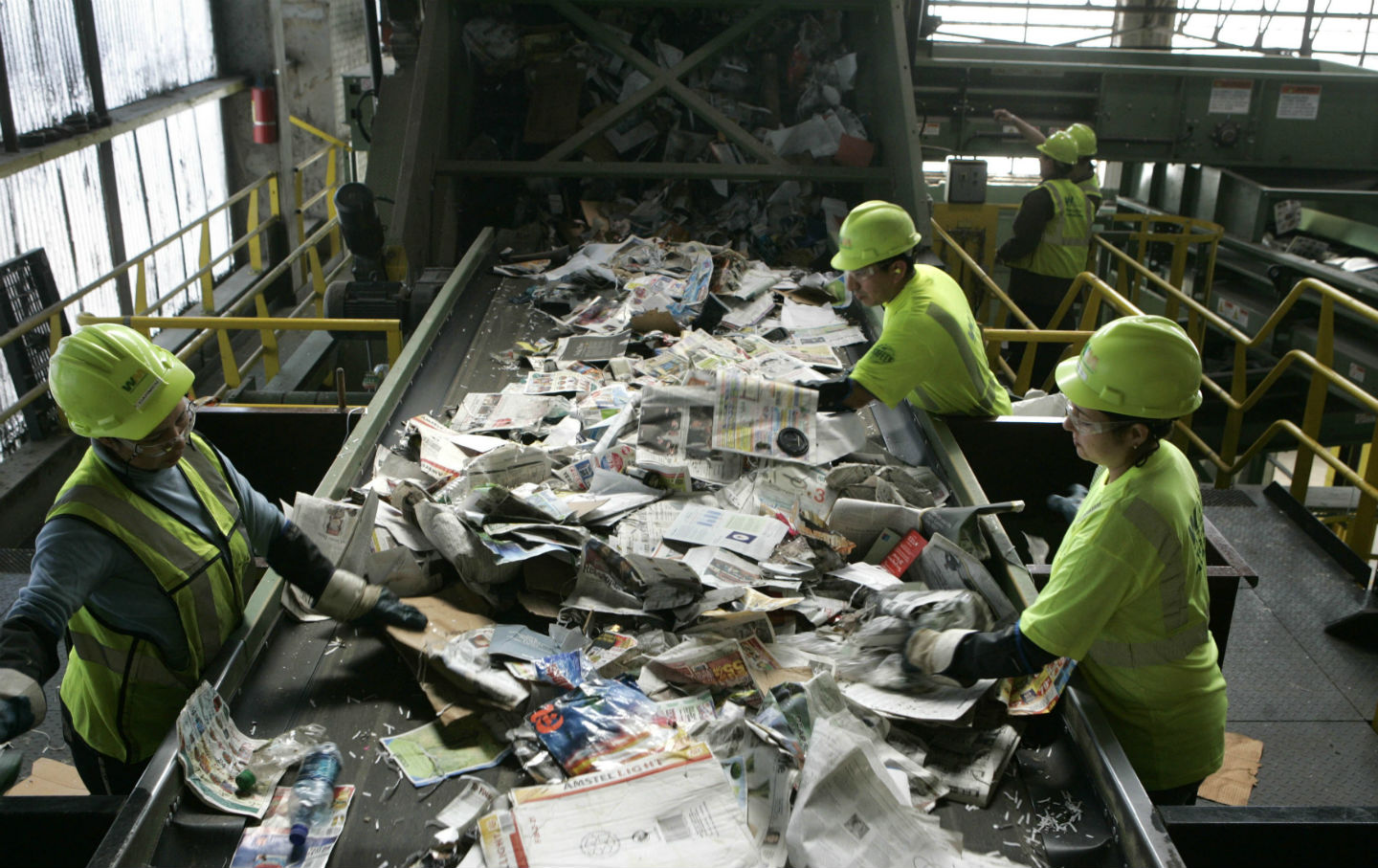 The green economy was chugging along at the Nevada paper recycling plant that morning in June 2012, feeding an oversized mound of waste toward a conveyor belt. But when the machine got jammed, the worker who tried to unclog it suddenly got flattened by a 2.5-ton mass of paper. A coworker rushed to extract him using a front-end loader, but, according to a government report, the worker died at the hospital two days later, smothered by the dead trees he had been tasked with salvaging.

The industries that pride themselves on being friends of the earth are often hostile to workers, according to new research on the safety conditions in recycling plants. Published by Massachusetts Council for Occupational Safety and Health (MassCOSH), National COSH, and other advocacy groups, the analysis of the industry shows that despite the green sector’s clean, progressive image, workers remain imperiled by old-school industrial hazards. Workers face intense stress, dangerous machinery and inadequate safeguards, while toiling in strenuous positions amid constant toxic exposures.

Often the sorting of recyclables requires directly handling hazardous materials and improperly disposed waste, such as plastic bags that accumulate and cause potentially deadly clogs in machines. Some cities allow dumping of “mixed” trash, leaving workers to separate metal cans from organic waste, or battery fluid from old meatloaf (cities could prevent such dangers through the slight inconvenience of simply requiring people to separate garbage beforehand).

In MassCOSH’s announcement of the report, former Boston recycling worker Mirna Santizo recalled, “We would find lots of glass, and needles. Sometimes workers are punctured and hurt from the needles. We would find dead animals in the bins and it really stinks.” Research shows composting and recycling workers also suffer “exposures and illnesses associated with inhaling endotoxins” emitted by rotting waste.

Just as sanitation workers have historically suffered both extreme labor abuses and job hazards, recycling workers’ physical insecurity is aggravated by economic vulnerability, as workplaces often lack labor protections and adequate staffing. One worker told researchers, “When I started working a sorter over 10 years ago, they had eight people on a sorting line, now there are only four, but the company expects us to work as if there are eight people on the line.” Some workers have reported “constant pressure from supervisors to work fast so as to not get fired.”

Unlike established municipal sanitation jobs, which often come with public-sector union protections, the minimally regulated temp workforce is often treated as disposable. Private government contractors that exploit temp labor, many of them low-wage immigrants, have little incentive to invest in long-term safety protocols. Despite the recycling sector’s modern, progressive image, some workers interviewed resorted to stunningly primitive means to protect their bodies: “they had created their own personal hand tools (sticks with bent nails or hooks) to assist them with line sorting jobs and to attempt to relieve the stress of continuous forward reaching.” Workers are regularly are exposed to harsh outdoor temperatures ranging from freezing to sweltering.

In Massachusetts, MassCOSH Labor Environment Coordinator Tolle Graham noted that local sanitation truck drivers are typically supported by “unions that look at working conditions and can negotiate around them.” However, unionization faces “a wall when it comes to the recycling sort centers” that hire low-wage workers. “Sadly, because of the way they’re set up, with people coming from temp agencies, and people being really fearful about their jobs, it’s been a really hard sector to have people have that voice for themselves.”

Driven by environmental regulatory goals and political hype, the green sectors are expanding while regulations lag; recycling-related industries could add as many as 1.5 million new jobs in the coming years, as cities work to raise recycling rates, cut carbon emissions, and pursue “zero waste” programs to curb pollution.

Yet Graham says recycling programs can open opportunities for “getting the best quality out of their recycling, making [work] safer and creating more living wage jobs.” In Massachusetts, the worker-run Cooperative Energy, Recycling and Organics has developed a fair labor model providing local food-scrap collection services to reduce waste, while bringing steady jobs to one of the city’s poorest neighborhoods.

Cities are rightfully getting serious about battling climate change and cutting waste. But if labor issues get lost in the green hype, advancing environmental progress might end up pushing communities backwards on industrial safety.