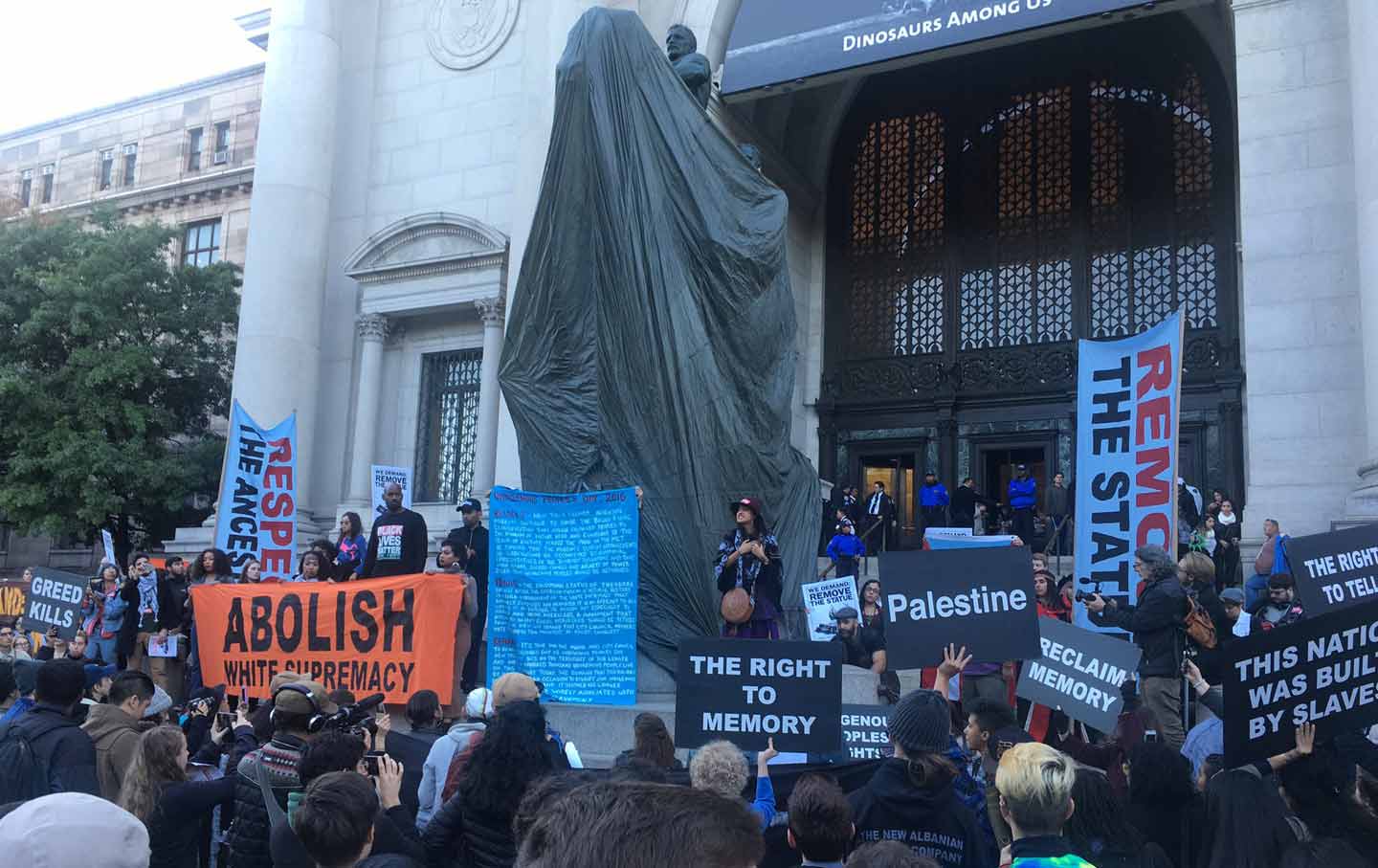 Decolonize This Place's protest outside the American Museum of Natural History in New York City on October 10, 2016. (Courtesy of @intersectionalist) (Twitter / @intersectionist)

The crowd of about 200 mostly youthful observers embarked on a subversive walk-through, snaking around displays of “native” artifacts poached from different continents, gazing at the scenes of “primitive” societies in a new light as their radical tour guides gave their own explanations of the exhibits. Their route was mapped out on a red-and-white printed brochure, with a cover depicting the Theodore Roosevelt statue at the museum’s entrance surrounded by police barricades.

At the Hall of Asian Mammals, standing amid a macabre menagerie of decorated carcasses, Tongan artist Vaimoana Litia Makakaufaki Niumeitolu proclaimed, “Shot down, stuffed, and hauled to the museum for display, these species made their way here through the circuits of empire.” Rooted in colonial plunder, she explained, the project that began with the embalmed animals continues today with the ongoing expropriation of native land throughout the world for “conservation,” with wildlife preserves that have been “depopulated for the use of tourists, just as the tradition of indigenous resistance continues.”

The tour proceeded to examine the antiquated orientalism of the “Hall of Islam,” which depicted the Muslim world as a primitive anti-modern cultural sphere; exposed the eugenicist ideology underpinning the “Man’s Rise to Civilization” exhibit, which placed Western modernity and technology at the pinnacle of social development; and dissected the “Hall of African Peoples,” in which black bodies are displayed as specimens and “the vast multiplicity of African social and cultural life is thinned out and labeled like flora and fauna.”

The collective behind the alternative tour, Decolonize This Place, grew out of the academic and artistic collaborations that began percolating during Occupy Wall Street five years ago. Their museum takeover was a symbolic protest against the gentrification and displacement unfolding just outside the marble walls, in poor communities of color of the surrounding city that are excluded from such elite cultural spheres.

The action was incubated in Artists Space in Soho, a freewheeling downtown studio that cultivates innovative contemporary art projects. During their three-month “takeover” at Artists Space, Decolonize is hosting meetings, performances and film screenings, along with art builds, in which activists gather to create protest signs, paint banners, and construct other DIY productions focused on gentrification, global labor activism, Palestinian resistance, and movements for indigenous rights around the world.

The Columbus Day gathering was just the latest action from the collective; they have previously deployed their particular brand of activist education to the Guggenheim and Brooklyn museums. Combining civil disobedience with speeches and music, their brief occupations have aimed to inject radical messages into insular institutions, both to raise public consciousness and to bring “outsider” community members into public spaces through coordinated actions that, as organizer Amin Husain says, “felt righteous.”

The physical presence of people of color and indigenous people at the action had the effect of “amplifying the messages that we want other people to hear: that this museum is our museum, and it shouldn’t be showing these kind of exhibits in this way that further a colonizing narrative.”

The decolonization movement has also inspired initiatives to take down monuments honoring icons of colonialism like Cecil Rhodes on the Oxford University campus, and challenged corporate sponsorship of galleries like the Tate Modern. As an intellectual movement, initiatives to decolonize museums evolved out of contemporary art discourses on politics and identity, and how established institutions should publicly reckon with structural inequities.

To Husain, the campaign’s overarching goal is to undermine colonialist narratives of conquest, disrupt the Eurocentric presentations of “prehistorical” communities, enabling communities to co-curate alternative portrayals and generate their own “history of the present.”

“What we’re trying to tell museums is that what you’re exhibiting allows these kind of things to happen today because it’s furthering an ideology in children,” Husain says, which, for future generations, “isn’t just about history but what history is being told and for what purpose.”

The Museum of Natural History has not publicly responded to the action, but Decolonize is following up. In the group’s Indigenous Peoples’ Day Declaration, Decolonize calls on the museum and city government to “Respect, Remove and Rename”; this includes eliminating degrading systems of human classification and racist portrayals at exhibits, returning sacred objects to native peoples, and dismantling the city’s Theodore Roosevelt statue outside the museum, which shows him mounted on a horse, flanked by Native American and Africa-American men.

As the protest concluded, the crowd circumvented security patrols and draped a dark gray cloth over the offending statue. Indigenous activist Rebelené Zapata Xochi called out to the crowd from the steps: “We are the people that have survived. Look around you. Our brothers, our sisters, your mothers and your fathers, and your heart is here.”

Kandia Crazy Horse, a Pamunkey country musician, who came to the museum after holding a benefit concert to support the indigenous-led Standing Rock protest in North Dakota, said the action showed that “We’re all bound in this together. It’s for the scholars to do the work to make sure all of the collection here and the history of the museum is kept in the forefront; and properly unpack what the archiving and conservation practices as well as what the dioramas, the statues and so on, really represent.”

The next phase is connecting Decolonize’s direct action–oriented, neighborhood-based anti-gentrification campaigns to the movement’s broader demand for museums to develop programs that engage surrounding communities, and share resources with local activists and artists to become more democratized, participatory cultural institutions.

Now that they’re under scrutiny, “these public institutions have a side to choose,” Husain says, “and they need to choose the side of the people, and they need to open up their space, and lend some of their resources, so we can fight this struggle that doesn’t end with an action or two.”

Roosevelt’s statue may have been covered temporarily, but the event was really about unmasking a long-buried truth: that history isn’t dead. For those who are still struggling to articulate their own stories and fight for self-determination, history is a work in progress.