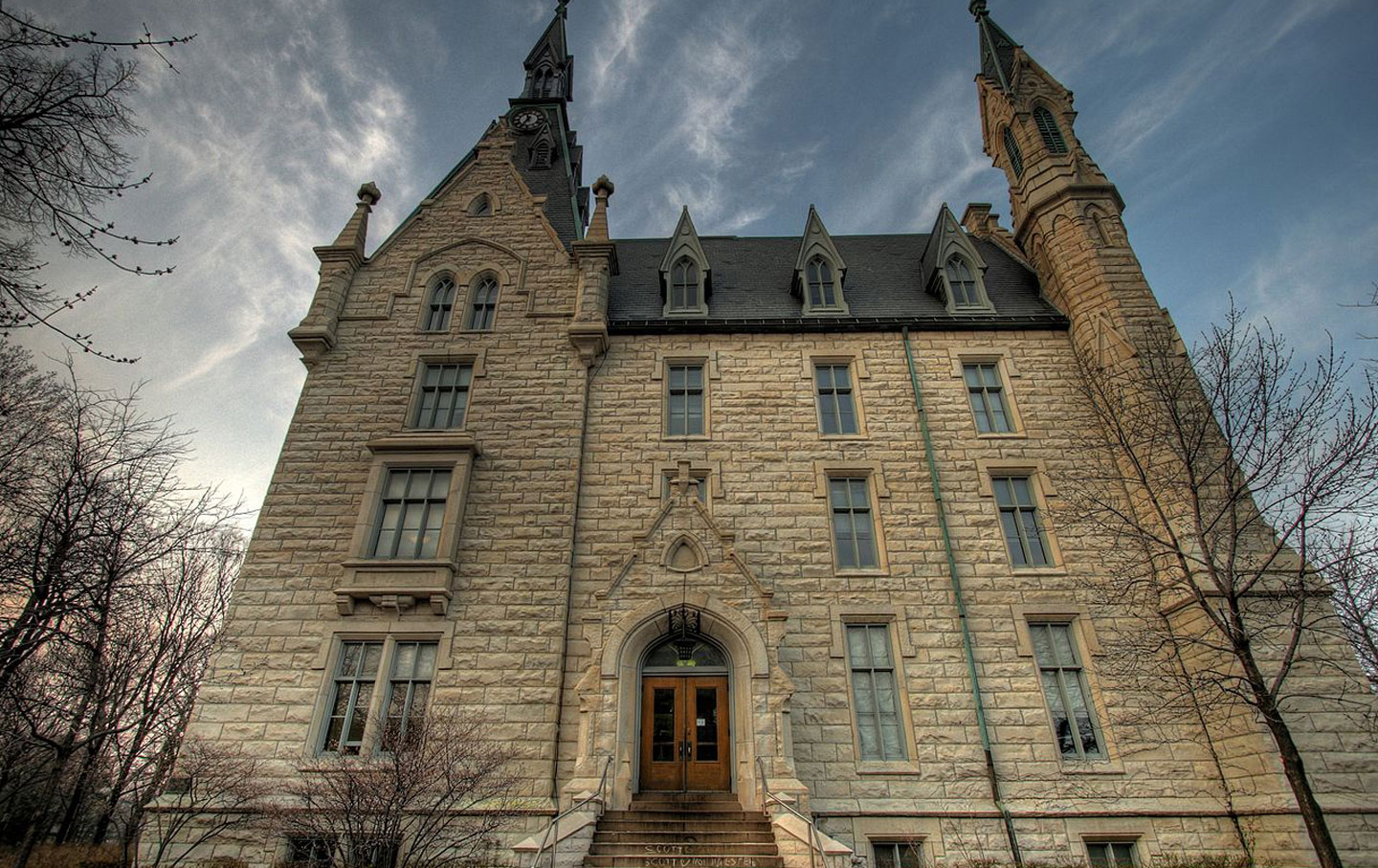 The manicured campus of Northwestern University has been an unlikely incubator of labor activism in recent months. The most notable labor battle has involved a groundbreaking campaign for union rights led by campus football players. But in the background, other labor stirrings were at work this spring. After the football players’ plight ended in a sad defeat at the National Labor Relations Board (NLRB), others were talking union off the field and in the lecture halls, feeding a labor buzz among several Chicago-area campuses.

Non-tenure-track Northwestern faculty members have just filed a formal election petition with the NLRB, on behalf of potentially more than 500 instructors across the campus, with both full- and part-time positions, including lecturers, postdoctoral researchers, and other lower-ranking instructors, according to Faculty Forward, the union-backed campaign that has been organizing private-university faculties nationwide. In a statement sent in response to a query yesterday afternoon, university spokesperson Alan Cubbage said, “Northwestern has not been served with a representation petition. If that happens, we will comment as appropriate.” But the faculty members involved with the campaign posted celebratory group selfies on Facebook on Thursday announcing that they had formally filed; it appears that the administration is remaining neutral for now.

Northwestern is now poised to join more than 50 campuses that have pushed for unionization since 2013 under Faculty Forward’s umbrella. The campaign is supported by SEIU as part of the same grassroots network as the Fight for 15 movement for low-wage workers in various sectors. While fast-food workers and daycare teachers are gunning for $15 an hour, adjuncts seek wage equity class by class, demanding $15,000 per course.

That’s a fairly distant goal for many adjuncts, who earn just a few thousand per course at many campuses, but it sets a realistic living-wage scale for instructors who currently struggle to meet their basic needs while earning a median fee of about $2700 per course. Even teaching on the equivalent of a full-time schedule, perhaps at multiple campuses, adjuncts often scrape by at about $20,000 a year.

According to Faculty Forward’s data analysis, nearly a third of part-time professors nationwide earn a salary that puts them in the low-wage bracket, at less than 150 percent of the federal poverty level. Illinois has a relatively high portion of poverty-wage professors, with about 16 percent at or below the poverty line.

About one in four part-time professors with families rely on public benefits nationwide. Public assistance programs subsidize the low incomes of roughly 100,000 families of part-time instructors. The bulk of those academic welfare dollars go toward Medicaid and subsidized children’s health insurance—a reflection of the precarity of adjunct work, which typically lacks the benefits and job security of a tenure-track appointment.

Some may bristle at the labeling of adjunct professors as the “fast-food workers” of academia. But statistically they share a financial profile with many of the lower-ranking service and clerical workers toiling in the cafeterias and offices on the same campus. Higher education today relies upon a broad spectrum of the workforce that—whether bussing trays or teaching organic chemistry—represents the world of precarious work.

But the academic precariat has leveraged this shared desperation by turning it into a movement. This past semester has seen multiple advancements in campus-labor organizing. Several campuses officially voted to affiliate with SEIU, including Saint Louis University, Wells College, Loyola University Chicago, Ithaca College, and the University of Southern California. There have also been major raises in contract negotiations for unionized faculty, driven by the momentum of Faculty Forward. The campaign has built specialized chapters focusing on organizing Jesuit institutions and historically black colleges and universities, which aim to push labor issues on campuses oriented around a social-justice mission.

Northwestern is a top-tier university with the kind of prestigious faculty not often associated with economic hardship. And indeed, the university became somewhat famous as a counterexample of some stereotypes about contingent faculty members in a 2013 study showing that students performed better in classes taught by non-tenure-track professors than in classes taught by tenured professors. (A closer read of the research, however, suggests the discrepancy was not necessarily because precarious conditions somehow improved teaching but arguably because the Northwestern contingent faculty had more full-time appointments and relatively secure working conditions.)

But the Northwestern instructors’ push for unionization doesn’t stem so much from a sense of crisis as from a belief that their  careers and institution will be strengthened by organized labor. The campaign cites rising tuition rates and relatively lagging investment in instruction, extreme inequality between the incomes of top administrators versus rank-and-file instructors, and gender pay disparities among professors.

According to The Chronicle of Higher Education’s salary database, reported adjunct earnings, collected from the public, have ranged from about $3,000 to $8,600 per course, though exact salary data is not systematically tracked.

Marcia Grabowecky, a research scientist who has taught as a non-tenured full-time professor at Northwestern for about two decades, says she generally has good working conditions and “very few complaints about my job.” But a union would provide “some transparency and equity to the system.” In addition, “non-tenure-line jobs appear to be disproportionately filled by women, and that there are equal pay issues that result from that.” (According to campaigners, pay gaps between men and women in comparable positions range from 9 to 17 percent)

Following the filing of the petition, Alessandra Visconti, a lecturer in Italian, noted via e-mail that some of her non-tenure-track colleagues were “now teaching up to nine courses a year and earn[ing] minimal pay.” The proposed bargaining unit encompasses a variety of instructional staff who represent a growing swath of the instructional workforce that has “very little control of the terms of their employment and compensation,” she says. “I see a union as the only means of guaranteeing fairness and transparency in the workplace for non-tenure track faculty,” she says.

By casting a wide net among the hundreds of faculty members who are excluded from tenure, the composition of the Northwestern campaign says something about the state of the contingent faculty movement: Organizing is not just about wages and benefits. Faced with a deeply unequal higher-education landscape, they seek to build a unified, equitable campus community.