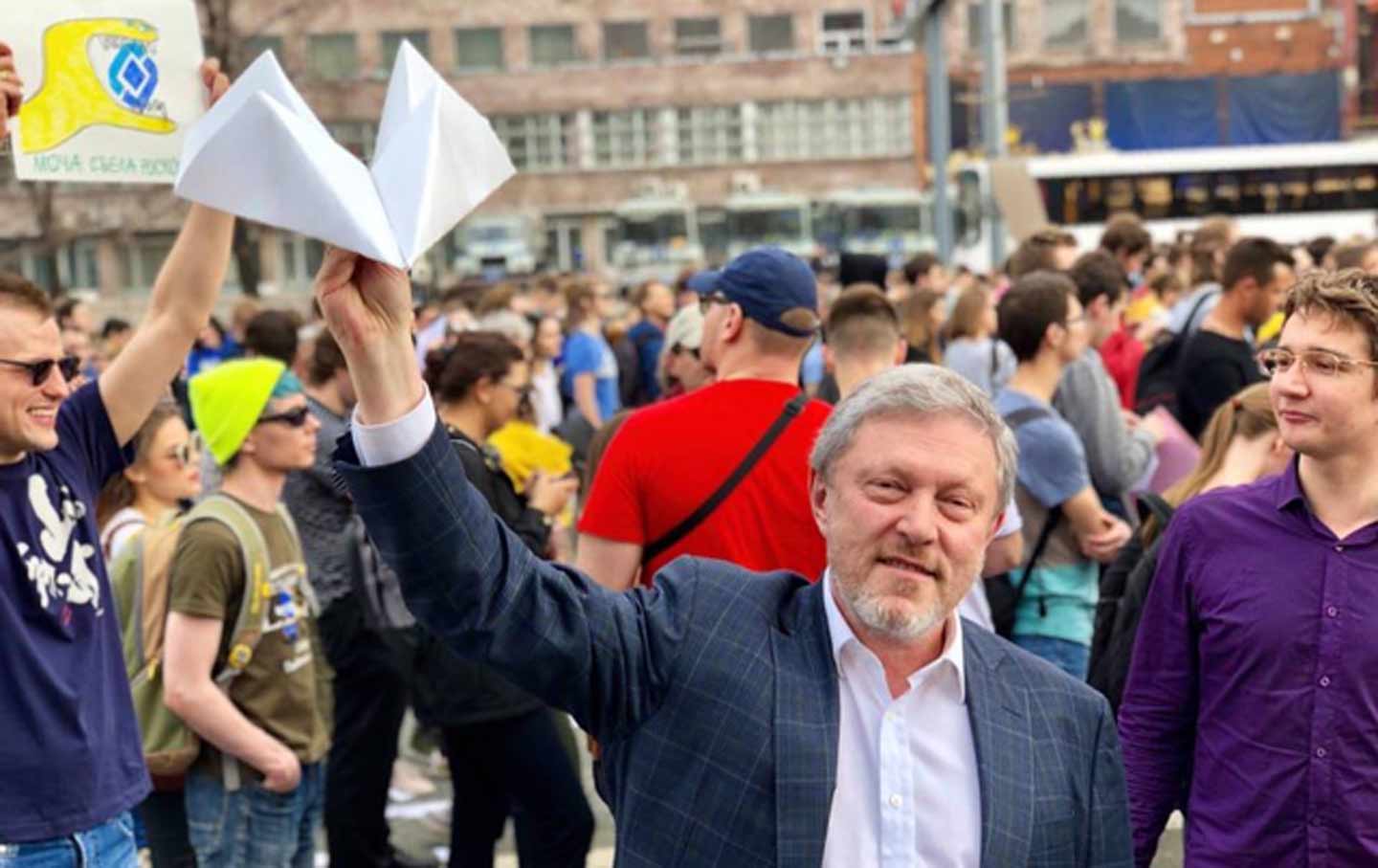 Protesters threw paper airplanes to highlight the fact that Telegram, a Russian-language messaging service, had been blocked.

Individual pickets in Novosibirsk recently defended State Duma deputy Leonid Slutsky, who has been accused by female journalists of sexual harassment. The picket signs read “Russia for Slutsky” and “Leonid Slutsky is a Patriot of Russia, an Enemy of the West, and a Real Man.” The organizer of the protest, a representative of the Public Foundation in Support of State Policy, told the press that “our goal is to show people that any attempt to discredit politics in Russia will be met with resistance.” The police in front of the State Duma have arrested women calling for Slutsky’s resignation.

The “Slutsky Case” has long moved beyond a discussion of the actual sexual harassment to reveal a profound crisis in the interaction of legislators and the public, a crisis in journalism and public trust in general. Not long before the presidential elections, Leonid Slutsky (LDPR party headed by Vladimir Zhirinovsky), chairman of the Committee on International Affairs, was accused of sexual harassment by several journalists—Farida Rustamova, a BBC correspondent, Ekaterina Kotrikadze of RTVI, and Darya Zhuk, a producer at Rain TV, who presented a shocking audio recording of their encounter. The harassment that Russian official propaganda calls an attribute of the decaying West had come to Russia. Nothing surprising there. Everyone knows that Russian executives of every stripe take advantage of their position, secure in the knowledge that it will go unpunished. It’s as old as the classics of Russian literature, and it is recorded in memoirs of Soviet leaders and the confessions of Gulag prisoners. In the 1990s, female journalists of independent newspapers ran a media campaign against “new Russians” who demanded sex from their coworkers. At that time, public opinion was categorically against that practice.

Today, the Slutsky case shows that times have changed. Instead of investigating and seeking justice, his fellow deputies, with rare unanimity, accused the journalists. Members of the Duma Women’s Club suggested the reporters dress more modestly. Speaker of the lower house Vyacheslav Volodin said that women journalists who wanted to avoid unpleasantness should not work at the Duma. He pointed out that all the women complaining about the deputy worked for foreign or opposition media. The State Duma Ethics Commission, where the victims appealed, held a session and “found no violations of behavioral norms on the part of Leonid Slutsky,” according to its representative Otari Arshba. The women members of the commission repeated accusations about the “provocative dress” of the young reporters.

The commission decision outraged many journalists of both sexes. Two dozen media outlets, including Ekho Mokvy, RBK, Novaya Gazeta, Kommersant, and Moscow Speaking, as well as popular bloggers, announced a boycott of Slutsky and the deputies who supported him. In response, the parliament made up lists of the media rebels and closed their access to the State Duma. Feminists with posters reading “Don’t Come In, They Grope You Here” and “Shame on Slutsky” were in front of the main entrance to the Duma. The Free Word Association called for Slutsky to be punished, the Gender committee of the opposition Yabloko Party and feminist groups called for him to lose his parliamentary mandate, and the union of journalists and workers in mass media sent a letter to the Parliamentary Assembly of the Council of Europe calling for a boycott of all Russian deputies. The media community attempted solidarity for the first time in many years. Unfortunately, workers of the numerous state media holdings did not join the protests. The state media spoke very little about the protests against Slutsky and the Duma decision, but gave a lot of time to “experts” who inevitably spoke of the “Western trace” and the “destructive influence” of the criticism, even bringing in Harvey Weinstein, who in their opinion was an innocent victim of intrigues and the aggression of vicious feminists.

The perceptions of Weinstein and Slutsky were completely different. For most Russians, Weinstein is a millionaire from the faraway “dream factory,” practically a fictitious character himself. Slutsky is the symbol of the crude boss, proud of his impunity, and people see hundreds of other little Slutskys scattered all over the country’s vast expanses. Slutsky was well known as a crude boor, there were news stories about him insulting policemen and waiters, and he was never punished. His harassment is also known to everyone who dealt with him, even “the voice of the Russian Ministry of Foreign Affairs” Maria Zakharova admitted in a conversation on Ekho Moskvy that he treated women disparagingly.

The refusal of the deputies to punish the boor (which many had hoped would happen) is the desire to affirm the principle of impunity and lack of jurisdiction for all deputies. This desire to protect the elite from all criticism is clearly visible in recent legislative initiatives, from amendments to the law on personal data to the demand to remove “reputation damaging information” from the Internet. Russians are used to the law being applied selectively. Now, apparently, even the everyday behavior of deputies is to be moved beyond the pale of criticism.

Journalism has become a woman’s job in Russia. Almost 80 percent of people working in media are women. That has its plusses and minuses. On the positive side, as a result of their work, the country has learned many new names and seen the live faces of ordinary people in conflicts and dramatic events, and the negative aspect is that there are almost no young men joining local news coverage, which has shamefully low salaries. Men still rule federal media and the financial flow of mass media, women never getting beyond the glass ceiling. But young women reporters stubbornly pursue all areas of the profession. Many do not fear the threats they get (triple the number of threats made to male reporters!) on the Internet and pressure from censors. Recent studies show that women in Russia leave journalism for these reasons less than they do in other countries. Our women are used to overcoming difficulties in general. But they are not willing to be second-class citizens, servants, or sexual objects at work. In this they are supported by many male colleagues, viewers, listeners, and Internet users.

The story with Slutsky, still unfinished, has amplified this solidarity. But it has also exacerbated old and painful issues. Why can’t women protect their rights and overcome discrimination in a profession where they are the majority? Why isn’t the voice of talented, professional, and decent people heard in the country and why can’t they unite and demand—quite constitutionally—that their opinion be heard when decisions are made? Will it always be this way? Recent events suggest the opposite. The blocking of the Russian-language messenger Telegram (which is Instagram, Twitter, and news all in one) shocked the Runet, disrupted the work of hundreds of organizations, and elicited the anger not only of ordinary users but also of business and academia. Thousands demonstrated against the ban in Moscow this week. Perhaps Telegram, which hasn’t been blocked fully in any case, will be the catalyst that will help people overcome their passivity and inability to consolidate. Perhaps it will remind the authorities that in the digital age the mobilizing technologies of the Soviet period do not work. Perhaps the long-needed dialogue will appear at last—dialogue that could lead to a change in the priorities of domestic policy, settling many pressing issues. I hope the “Slutsky case” will be resolved by an accurate assessment of the harm it did to the Russian parliamentary system, and that the shame that Slutsky’s behavior deserves will be extended to the people who called him a real patriot.