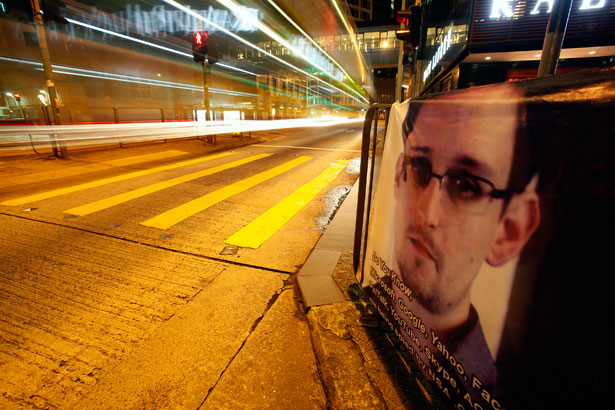 In October, I traveled to Russia with three other Americans to present former National Security Agency contractor Edward Snowden with the annual Sam Adams Associates Award for Integrity in Intelligence. Ray McGovern (retired CIA analyst), Thomas Drake (former NSA senior executive and whistleblower), Coleen Rowley (retired FBI agent and whistleblower) and I felt it especially important that Snowden receive this award from Americans who served the government in the intelligence and national security fields. We all had serious concerns about our trip—not about getting into Russia, but about getting back into our own country. We left Washington with a lawyer on retainer and no electronics—cellphones, laptops or any of today’s normal lifelines—knowing that the United States could geo-locate us and find Snowden, and also knowing we could have our devices searched and confiscated upon our return.

The Sam Adams Integrity Award is named for a CIA analyst who discovered in 1967 that there were more than a half-million Vietnamese Communists under arms—roughly twice the number the US command in Saigon would admit to, lest Americans learn that claims of “progress” were bogus. Adams pressed for honesty and accountability but stayed “inside channels”—and failed. We believe that Snowden exemplifies Adams’s courage, persistence and devotion to truth. We wanted Snowden to know that 60 percent of young Americans support him, as well as thousands in the national security and intelligence agencies where we used to work.

The first thing I’m usually asked is how Edward Snowden is doing. Given the extraordinary circumstances and pressure he’s under, he’s doing remarkably well. Snowden was warm and engaged. He was brilliant, humble and idealistic—in the best sense of the word. It is the sort of idealism that allows someone to undertake such a magnificent act of civil disobedience. It’s an idealism that believes democracy can rein in the surveillance state our country has become, if only the public knew what was going on.

It’s important to remember that Snowden is an asylee, not a “fugitive,” as the US mainstream media routinely describe him. An asylee has the right to be left alone, not hunted like an animal, but the US government refuses to recognize Russia’s grant of political asylum, as it is obligated to do under the Universal Declaration of Human Rights.

Edward Snowden is not being controlled by the Russians, or anyone else for that matter. He is fiercely independent and makes his own decisions, and he’s understandably frustrated by insinuations that he is giving the Russians information. He ticks off abundant evidence to the contrary. First, he points out, he didn’t destroy his life merely to become a Russian asset. Second, he’s in Russia only because the United States revoked his passport when he was en route to Latin America. Third, WikiLeaks journalist Sarah Harrison has been by his side the whole time, in part to bear witness to the fact that he is not engaged in spying. Fourth, it is obvious that Snowden chose to give information about the NSA’s secret dragnet surveillance to the American people, not foreign adversaries. Fifth—and perhaps most significant, considering the contrary narrative promulgated in the United States—he has not had access to the information he revealed since he left Hong Kong.

The issue of Snowden’s security is paramount. Russia clearly has an interest in protecting its refugee. Attorney General Eric Holder said that the United States would not torture him if he returned, hardly an encouraging promise. Senator Dianne Feinstein accused him of treason—an act punishable by death. And former NSA and CIA director Michael Hayden and House Intelligence Committee chair Mike Rogers joked recently at a panel discussion on cybersecurity about putting Snowden on the “kill list” for assassination. The audience laughed. No one protested that this was wildly unprofessional, inappropriate and profoundly disturbing. When we raised this exchange with Snowden, he shook his head at how such an absurd notion could at the same time be realistic. He also noted how hypocritical it is that Director of National Intelligence James Clapper can blatantly lie to Congress, under oath and on camera, and not be charged with perjury, while the government pursues him with an unhinged, Javert-like zeal, charging him with espionage for telling the truth.

Snowden follows the news closely and is pleased with reform-minded responses to his revelations, in America and abroad. His observation that the “government needs to have a trust relationship with the public” stood out both for its simple obviousness and seeming impossibility. His words echoed those expressed in his testimony to the European Parliament about how public debate is not possible without public knowledge. And while he’s gratified that Congress is finally engaging in reform, Snowden worries that it will focus too much on the Patriot Act. I was astounded that a technologist could be so well versed in the weedy legalese of surveillance law. “One of my big issues so far is that most of the [reform] bills address Section 215 of the Patriot Act, which is never going to survive. It’s indefensible,” he observed. “702 [of the FISA Amendments Act] is the real dragon, because it’s the heart of the FAA, which institutionalizes warrantless surveillance.”

We did not discuss particular news articles or revelations, but I was struck in Snowden by something I’ve always applauded about Julian Assange. Despite whatever peril he was in, Assange always mentioned concern for whistleblowers, including Drake, Chelsea Manning, William Binney and John Kiriakou, many of them clients of mine who were facing espionage charges. They were grateful, as was I, for those words of support in these very lonely battles. Similarly, Snowden—the most wanted man on the planet—worries more about the criminal threats against others so pivotal in his journey: WikiLeaks, Julian Assange, Laura Poitras, Glenn Greenwald and especially Sarah Harrison, who has been his shepherd, friend, protector and constant companion since Hong Kong.

Snowden was willing to give up his six-figure salary, comfortable life, family and friends to try to rescue the United States from itself. He made the biggest whistleblower disclosures in the history of the world and asked for nothing in return. Nonetheless, like many whistleblowers facing retaliation, Snowden has been branded a “narcissist.” Those whose lies and lawbreaking Snowden exposed are eager to see him smeared because it helps them cover up their wrongdoing. Those who stayed silent while government officials misled the public and abandoned the Constitution are willing to listen to the smears because it helps them rationalize their silence.

Jesselyn Radack detailed her own experiences as a whistleblower back in 2005.