A portion of the “safety plan” that 6-year-old “D.L.” was required to sign following an alleged incident of sexual abuse at a Southwest Key Programs facility.

According to immigrant-rights advocates, a 6-year-old girl separated from her mother under the Trump administration’s “zero-tolerance” immigration policy was sexually abused while at an Arizona detention facility run by Southwest Key Programs. The child was then made to sign a form acknowledging that she was told to maintain her distance from her alleged abuser, who is another child being held at the same detention facility.

The girl, who is only identified by the initials “D.L.,” and her mother had been fleeing gang violence in their native Guatemala. According to the family, the pair entered the United States at a point of entry in El Paso, Texas, on May 24, where they presented Border Patrol authorities with paperwork claiming that they had “credible fear” that returning to Guatemala would result in harm. On May 26, government officials separated D.L. from her mother and sent her to Casa Glendale, a shelter outside of Phoenix operated by Southwest Key Programs. It was there that the alleged abuse occurred.

Before D.L. was taken away, her mother provided authorities with the phone number of D.L.’s father, an undocumented immigrant living in California. On June 11, D.L.’s father received a phone call from Southwest Key explaining that a boy had fondled his daughter and other girls. According to family spokesperson Mark Lane, D.L.’s father was told not to worry, because Southwest Key was changing some of its protocols and such abuse would not happen again. (Lane was connected with D.L.’s family through Families Belong Together, a coalition of civil-rights groups formed in response to the recent border crackdown.) Lane says that D.L.’s father asked to speak with a social worker, but, despite promises from the facility, he never heard from one.

A Southwest Key Programs document obtained by The Nation confirms that D.L. was reported to have been sexually abused on June 4, 2018. On June 12, one day after D.L.’s father was contacted, the 6-year-old girl was presented with the form stating that, as part of the facility’s intervention protocol, she had been instructed to “maintain my distance from the other youth involved” and had been provided “psychoeducation,” described in the document as “reporting abuse” and “good touch / bad touch.” The form, posted below, shows D.L.’s “signature”—a single letter “D,” next to the characterization of her as “tender age”—which supposedly confirms that D.L. understands “that it is my responsibility to follow the safety plan” reviewed with her. 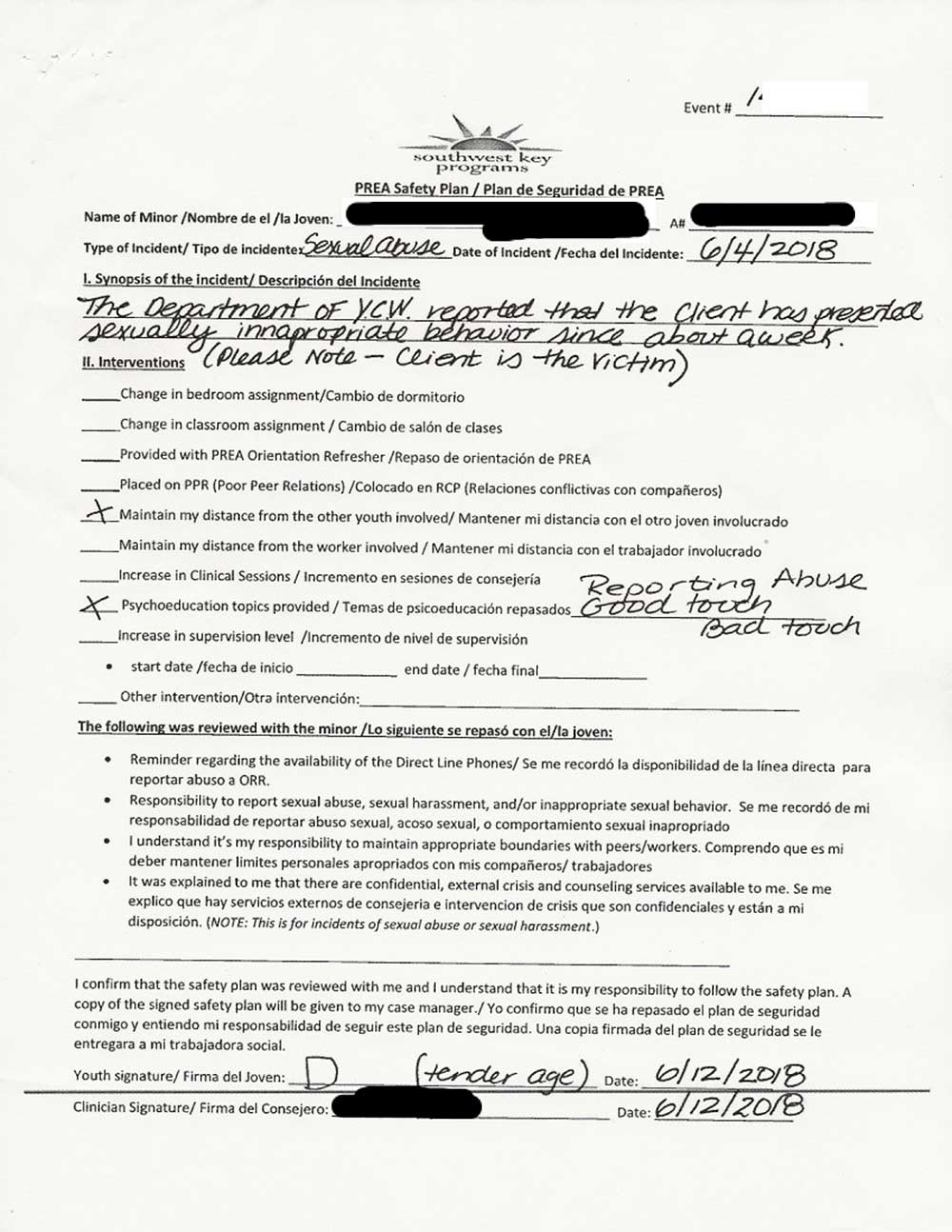 When D.L.’s mother learned about the incident, she was still being detained in Texas and was devastated. “I felt really horrible. I couldn’t do anything for her, because we were separated,” she said through a translator in an interview with The Nation. “It was a nightmare. When my husband told me what happened, I felt helpless. She was so little, she was probably so scared, probably afraid to say anything to anyone. It was a total nightmare for me.”

But the nightmare wasn’t over. On June 22, Southwest Key again contacted D.L.’s father and informed him that the same boy initially cited for abuse had hit and fondled D.L. again. According to Lane, D.L.’s father asked how the facility could allow this to happen, and the woman on the phone responded that she was only calling him to advise him that it had happened, that she didn’t have permission to say anything else, and he would have to speak with the director.

Southwest Key, a nonprofit based in Austin, Texas, is contracted by the federal government to house immigrant minors in 26 facilities across the United States, according to a report in Texas Monthly. The company’s shelters have come under increased scrutiny since the Trump administration began forcibly separating children from immigrant parents seeking asylum. In Texas, where the nonprofit operates a number of children’s shelters, facilities have been cited for hundreds of violations over the past three years. Southwest Key is expected to be paid $458 million by the federal government this year.

When The Nation contacted Southwest Key, a woman who answered the phone said she was not allowed to talk to the media. Additional requests for comment have not been answered. The Department of Health and Human Services, which contracts with Southwest Key, also did not have a comment at press time.

Earlier this year, the ACLU released a report, based on 30,000 pages of documents obtained through the Freedom of Information Act, that described hundreds of cases of abuse of immigrant children in US custody between 2009 and 2014. Customs and Border Protection issued a statement calling the report “unfounded and baseless.”

Through the work of Families Belong Together and a legal team assembled for this case, D.L., her mother, and her father have now all been reunited.

According to D.L.’s mother, when the family came together again, the young girl was confused. “I hugged her, I was crying. She didn’t recognize me,” the mother said. “She told me that she thought I was never going to be with her again and that she was going to have to live with another lady. She behaved like she was still in detention. She wouldn’t touch me, hug me, or kiss me.”

“It lasted for a couple of days,” said D.L’s mother. “She didn’t know I was her mom. She thought I was another social worker.”

D.L.’s mother reports that her girl is getting better every day, but the trauma of the ordeal lingers. “She is still behaving following the rules of the detention center,” said her mother. “She doesn’t let them touch her; she doesn’t touch them. She wakes up at 6, and bathes and eats. She behaves like she is programmed.”

“She says, ‘Please don’t return me to Guatemala; I don’t want to go back to that place where I have to sleep alone with the other kids,’” added her mother.

D.L.’s father was anxious as well, since he hadn’t seen his daughter in a long time. “She recognized me quicker because of all of the photos that she had seen, and because I spoke with her many times while she was in the shelter,” he recounted.

“My morale was so low,” D.L.’s father says of the time they were all separated. But now, “When I had my wife and daughter with me, I felt so good. I knew that now that I had them at my side, they would be protected; I would be able to protect them again. I don’t know what to hope for. I don’t know what will happen. But I think that whatever happens will be good, because we are all three together again.”

Correction: An earlier version of this article inaccurately described the age of the alleged abuser. The text has been corrected.