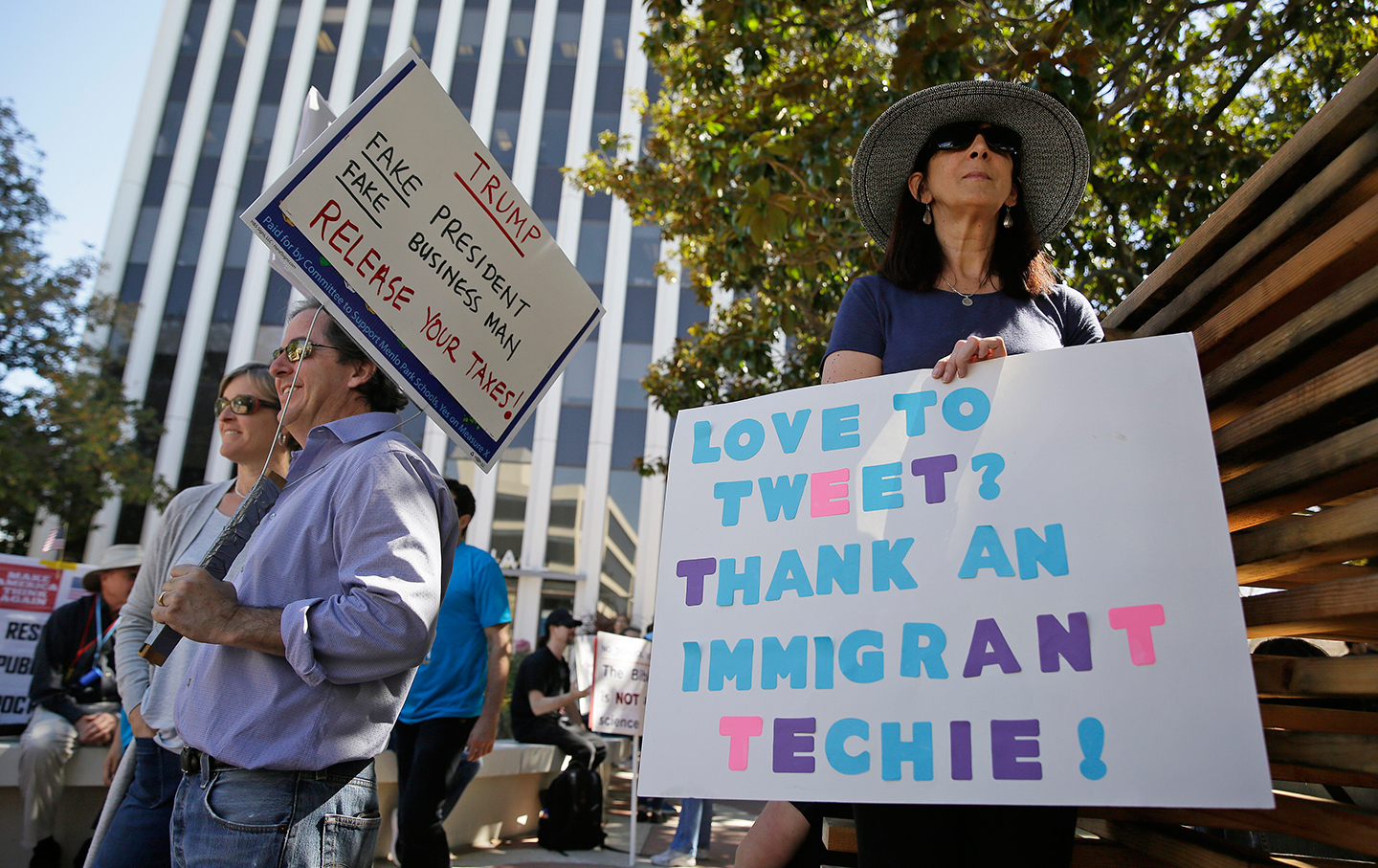 No one knows talent better than Donald Trump. That’s supposedly why the president has vowed to end exploitative temporary-visa labor systems and instead promote “merit-based” foreign-labor recruitment, so good jobs are reserved for skilled, deserving Americans, we’re told. He’s not just talking about building walls to keep out immigrants, but targeting engineers the United States imports to build our booming tech sectors, through the H-1B foreign-labor visa program.1

Last week Trump announced small-scale reforms to tighten regulation of H-1B, which he denounced during his campaign as a “cheap labor program.” The program has been criticized from both the left and the right for being a corporate giveaway that helps replace US workers in IT and other “knowledge industries” with foreigners, many of them from Asian countries with a surplus of young, hungry techies seeking jobs with top multinationals—and often willing to work for bottom dollar. Since the issue deals with highly trained, college-educated specialty fields, it’s seen as a direct threat to the white-collar labor force, rather than the blue-collar, low-wage jobs that are arguably those that “Americans won’t do.” 2

But Trump’s promises to tighten oversight of the program will likely fall short of the full shutdown that his “America First” critics seek, and will ignore the program’s endemic inequities on labor rights. But mainly, Trump’s tough talk on visa workers is alienating thousands of foreign tech workers whose hopes for American-style success are now even more uncertain.3

The core problem with H-1B, according to labor advocates, is that despite great demand for technology professionals, the program creates a low-wage labor surplus for the industry. As with other foreign guest-worker programs, the imported techies are often shunted into a second-tier permatemp labor pool, which in turn may displace jobs and depress wages for both migrant tech workers and their US colleagues.4

The [H-1B] program creates a low-wage labor surplus for the tech industry.

In vilifying “white collar” workers from Asia, Trump opportunistically courted struggling lower-middle-class professionals, playing on lower-bourgeois protectionist anxieties. But beyond the political arena, whatever piecemeal reforms Trump presents will fail to hold accountable the real corporate giants driving Silicon Valley’s modern-day “shape-up.” Advocates say the system encourages abuse by mega-staffing firms like Infosys and Accenture, who acting as labor brokers that feed low-cost workers to employers, leaving many individual smaller companies unable to tap into a labor pool that is monopolized by the biggest players. While huge multinationals and staffing agencies dominate the market for this perma-outsourced workforce, they can harvest masses of applications in order to claim as many visa spots as possible, creating an epic backlog that the government tries to manage by issuing visas through a lottery system.5

Bosses insist there simply “aren’t enough” STEM-field graduates in the United States to match the job-market demand. But the labor mismatch is less about workers’ qualifications than whether the job fits for workers. Why would an American STEM graduate take a job that won’t earn her enough to repay student debt, in a field where promotional opportunities are often reserved for white men? 6

So companies find it more profitable to bring in lower-wage migrants, often highly trained specialists frustrated by economic barriers in their own home countries. But their career pathways are constrained by debt, restrictions on changing employers, and severely limited access to green cards.7

And they’re still poor. About 40 percent of H-1B visas approved in 2015 occupied the lowest-wage tiers, which the Economic Policy Institute estimates could undercut a sector’s prevailing wages by 40 percent. Tracking career progress over time, EPI found that out of roughly 460,000 H-1B visas imported in recent years, the ratio of immigrant Mark Zuckerbergs to rank-and-file coders was heavily skewed, despite Big Tech’s youthful entrepreneurial promise:8

[T]he top H-1B employers have been using the program for temporary labor—and as a vehicle to outsource jobs to overseas locations—rather than as a bridge to permanent immigration, which could keep skilled workers in the US labor market for the foreseeable future.9

Based on EPI’s analysis, fewer than 140,000 of the H1B workers employed in the United States from 2011 to 2013, out of nearly 819,000 approved visas, actually led to a green card for a worker, suggesting that guest workers experience permanent instability:10

Cognizant, a US-based offshore outsourcing behemoth, received 4,293 H-1B visas in 2014, yet applied for a mere 57 green cards for its H-1B workers in the same year. That is a 1.3 percent rate, or one green card application for every 75 H-1B workers.11

These workers operate as high-tech indentured servants: Even if they renew their visas, their legal status essentially remains dependent on their firm’s discretion. If they manage to apply for permanent residency, until recently their spouses were barred from working (both economically disenfranchising immigrant women and destabilizing their families)—and many fear that Trump could try to reinstate Obama’s recent repeal of the ban.12

About 40 percent of H-1B visas approved in 2015 occupied the lowest wage tiers.

So how can we rationalize Silicon Valley’s casino capitalism and help close the tech-opportunity gap for both migrant and US-based workers? EPI analyst Daniel Costa says that while Trump’s initial administrative measures appear to beef up enforcement to limit outsourcing, “I have not seen anything yet…that would suggest to me that they’re interested in protecting migrant or American workers, but on paper this could help, if done right.” One basic measure would be ensuring that top-tier jobs and wages are provided to workers in the field already, and offer them job security before companies seek outsourced labor.13

A public letter from Senator Dick Durban of Illinois urged Trump last month to dial down the xenophobic rhetoric and “immediately revamp the annual distribution of H-1B visas, which is currently done by random lottery.” Firms should instead prioritize the highest-paid workers and the “best and brightest graduates of American schools.”14

Protecting US-based workers before seeking low-cost temps would be a reasonable way to ensure that visa-based workers aren’t exploited. If companies do hire from abroad, workers deserve “no less than the average wage for the specific occupation in the local area, so that they’re not underpaid according to US wage standards,” which could be readily accomplished simply by eliminating the lowest-wage visas.15

Sadly, however, no current reform proposals deal directly with global labor justice: All workers deserve stronger oversight of employers’ compliance with wage-and-hour rules. And whether migrant or native-born, all workers deserve a fair shot at a living wage and a career-track job, rather than a visa lottery. Costa says that workers should be eligible to “self-petition for green card status after about 18 months,” and then if an employer and worker negotiate a fair match, “then the worker should be on a quick path to becoming a permanent fixture in the US labor market and having all the rights that US workers and citizens have.” Instead of doing equal work for less pay, “they will, by definition, be complementing US workers and adding value to the economy.”16