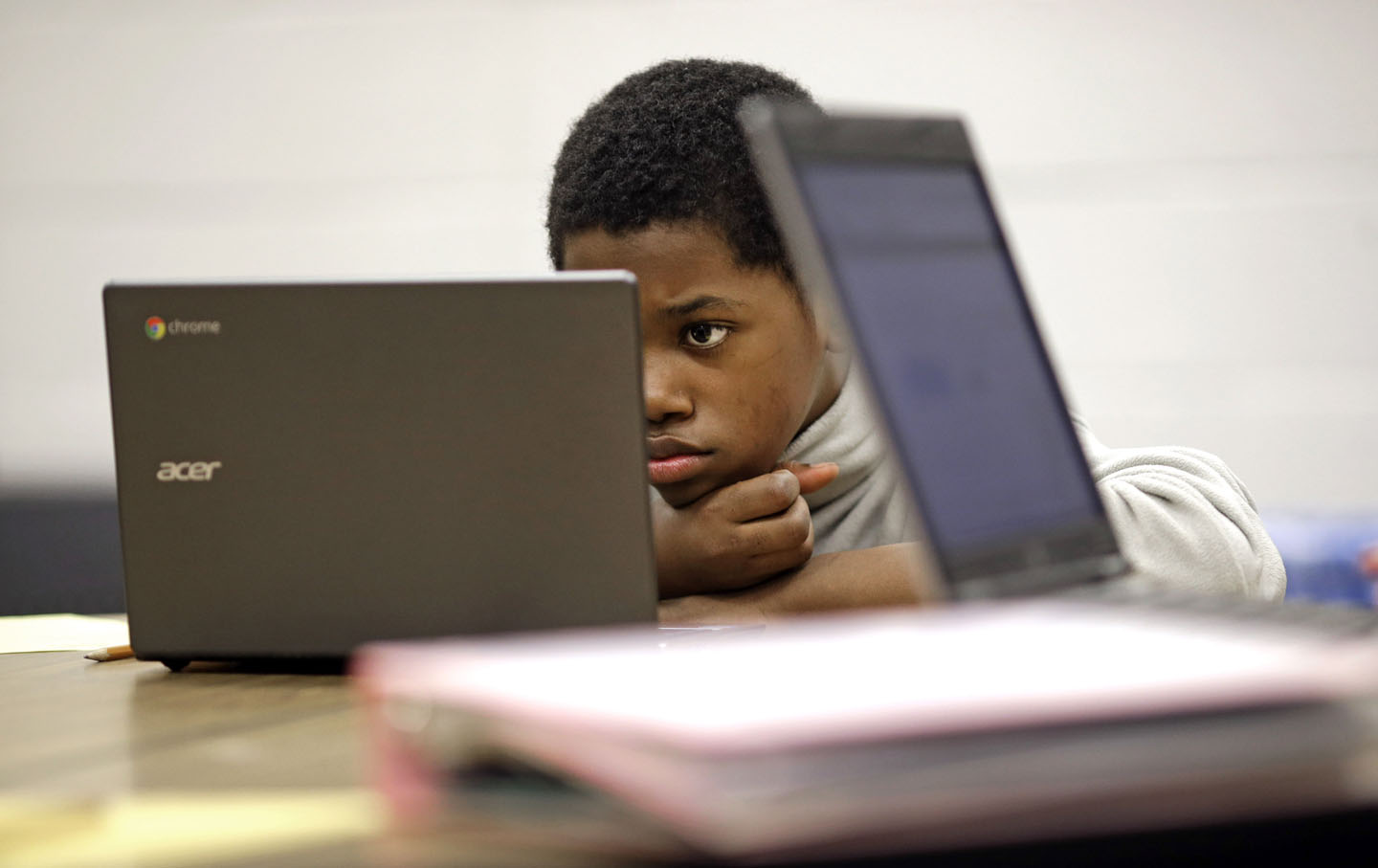 A student reads test questions on a laptop during a trial run of a new state assessment test in Annapolis, Maryland. (AP Photo/Patrick Semansky)

By the time a student in one of Chicago’s public schools completes eighth grade, she will have taken an average of 180 standardized tests. That’s part of the legacy of No Child Left Behind, the 2002 version of the Elementary and Secondary Education Act that ushered in a regime of test-based accountability for schools and teachers. Federal lawmakers are now in the middle of overhauling the law, and there is real appetite for scaling back the power that the Department of Education has to punish schools based on test results.

Yet many Democrats are still committed to the driving philosophy of NCLB: that accountability measures tied to annual tests are essential for closing achievement gaps between poor and minority students and their classmates. This position is espoused by the White House and Education Secretary Arne Duncan; by leading Democratic lawmakers, including Senators Elizabeth Warren and Patty Murray, the senior Democrat on the education Health, Education, Labor and Pensions committee; and some civil-rights groups, including the NAACP and the Urban League. “When we don’t hold our schools and states accountable for educating every child, it is the kids from our low-income backgrounds, kids with disabilities, kids who are learning English and kids of color who too often do fall through the cracks,” Murray said recently.

“What, from our vantage point, happens from these tests is not improvement. It’s destruction.”

Whether and how to boost accountability is one of the sharpest points of contention in the ongoing Senate debate about a bipartisan overhaul of NCLB crafted by Murray and Republican Lamar Alexander. As it currently stands, the legislation would not end the era of high-stakes testing, but it would shift to the states the question of how tests are used to evaluate and discipline teachers and schools. The White House and other Democrats would like to include stricter rules for states to identify and intervene in low-performing schools, saying they’re necessary to protect poor and minority students.

The debate has been narrowly framed as a partisan question of federal versus state control over testing. But some educators, parents, and advocates are calling for a deeper discussion about whether standardized testing serves a civil-rights agenda at all. Instead, they argue, it does the opposite. “In the face of clear evidence that children of color are more likely to be subjected to over-testing and a narrowing of curriculum in the name of test preparation, it is perplexing that DC based civil rights groups are promoting annual tests,” write Judith Browne Dianis of the Advancement Project, John Jackson of the Schott Foundation for Public Education, and Pedro Noguera, a professor at New York University (and a Nation contributor), wrote recently.

“What, from our vantage point, happens from these tests is not improvement. It’s destruction,” reads a letter sent to Senate leaders on Monday from the Journey for Justice Alliance, which describes itself as “an alliance of 38 organizations of Black and Brown parents and students in 23 states,” along with 175 other organizations.” The letter details a number of ways in which test-based accountability has hurt minority children, including narrowed curriculum, the loss of community schools, and the demoralization of the teaching corps. It calls on Congress to “to pass an ESEA reauthorization without requiring the regime of oppressive, high stakes, standardized testing and sanctions that have recently been promoted as civil rights requirements,” and to instead promote “balanced assessments, such as oral exams, portfolios, daily check-ins and teacher created assessment tools.” The letter also asks lawmakers to focus less on continued diagnosis of well-known inequities in education outcomes and more on solutions: investment in wrap-around services and alternatives to punitive discipline, increased funding for schools serving low-income students, and a moratorium on the use of federal funds to support charter schools.

Researchers at the National Education Policy Center considered the civil-rights disagreement in a February brief. “For very good reasons, many civil rights groups lined up behind NCLB,” they wrote, noting that opportunity and achievement gaps were clear before the advent of high-stakes testing. However, they argue that lost in the debate about overhauling NCLB “is whether test-based accountability policies will produce equitable educational opportunities through substantially improved schooling.” Based on achievement data, the brief concludes that those policies have not, and will not. “What NCLB and related policies added was a set of punitive interventions, not a guiding knowledge of the gaps and not a set of strategies and resources to close the gaps,” they write.

The question Congress is tiptoeing around is what “accountability” means. Critics of high-stakes testing aren’t asking for states to be let off the hook for failing to boost opportunities for poor and minority kids. Their point is that while testing doesn’t fix the inequities it illuminates, low scores provide justification for interventions that undermine the public school system. There’s little reason to think authorities will suddenly choose new kinds of interventions, like reducing class size. “Why would we be stuck on annual testing?” asks Marc Tucker, president of the National Center on Education and the Economy, instead of less frequent assessments or testing sample groups. “Well, there’s one thing that is very important to the administration that cannot be done unless you do annual testing, and that is being able to attribute to a particular teacher the performance of the students that the teacher has taught in a given year.” There are lawmakers, like Ohio Senator Sherrod Brown, who would like to reduce students’ test load and hold states accountable for providing resources, not just raising scores; but even he argues that “annual testing can be a useful yardstick to measure student achievement.”

While many Democrats are concerned about accountability in traditional public schools, fewer are interested in asserting oversight of charter schools, though they would like to divert more federal dollars to them. Brown has proposed a measure to curb “fraud, abuse, waste, mismanagement and misconduct” at charters, and it will be interesting to see who lines up with him. “There’s no sector that we’ve seen that misspends tax dollars more than these for-profit charter schools,” Brown said on a call with reporters on Thursday. “I’m curious that the people that complain about waste, fraud and abuse in government are now standing up to defend these for-profit charters.” (It’s worth noting that some public-education advocates argue that the question should be not be how to improve management of the charter industry, but whether it should exist at all.)

There are a number of other issues to be worked out in the Senate bill, including how far states should go to protect students from bullying based on sexual orientation or gender identity. Reconciling what the Senate passes with the overhaul that the House approved by a party-line vote on Wednesday will be a complicated process, too. The House version more dramatically restricts the Department of Education and contains several provisions that the White House won’t accept—including Title I portability, which would siphon off resources targeted to schools in low-income areas. Congress is nearly a decade late in overhauling NCLB, and though there’s real momentum to get something done this year, there’s still a chance it won’t happen. Either way, lawmakers aren’t really rethinking the basic premise of that much-hated law.