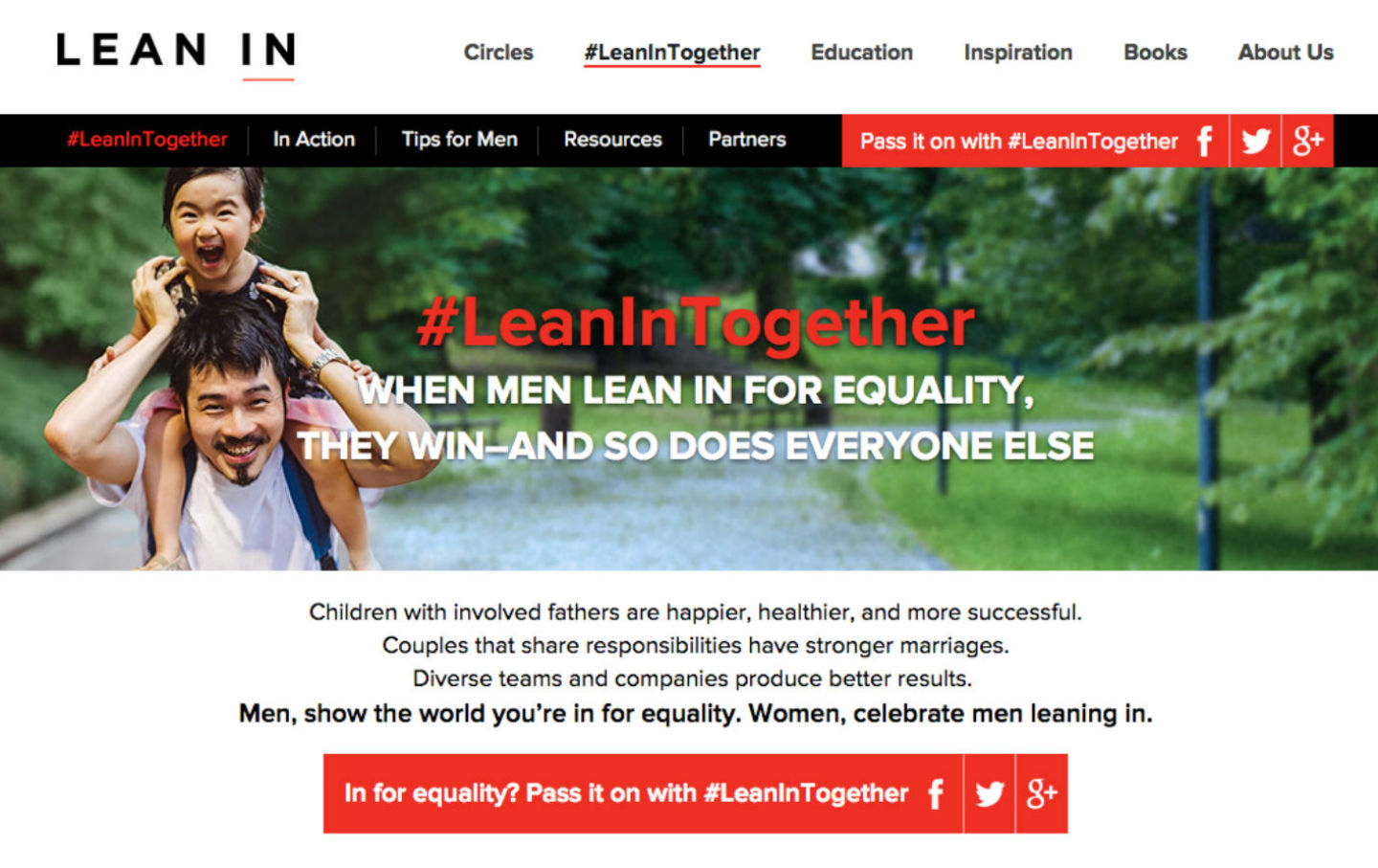 On Wednesday night, Lean In launched a new campaign called Lean In Together. While Sandberg’s original exhortation was for women not to “leave before they leave” their jobs even if they have or might have children, now the organization wants to support and promote “men leaning in for equality.”

Including men is essential if women are going to get closer to equality. As Lean In’s president Rachel Thomas told Bloomberg News, there’s no way “we can get to true equality if men don’t actively participate.” They are, after all, not just half the workforce and half of the world’s parents; they also still hold the most powerful positions in business and politics. On an individual level, family life is a zero-sum game: someone has to feed and bathe the kids at night, arrange the play dates and doctors’ appointments, and make sure the house is clean. Currently, that someone is still overwhelmingly female. If men were to take on more of the unpaid housework, that would free up more of women’s time to spend on paid employment and they wouldn’t have to so often interrupt their careers to have families.

Lean In Together is basically telling men to “lean out” without saying as much. In a video released as part of the campaign launch, Supreme Court Justice Ruth Bader Ginsburg and former Justice Sandra Day O’Connor talk about how their husbands stepped back from their careers to support their ambitious wives. Condoleezza Rice’s father left his university job at the same school as his wife when they got married to avoid a nepotism rule. Others talk about the fathers who spent time raising them and encouraging them. The language the campaign uses, however, is not about leaning out. It’s trying to tell men they can have it all, if “all” means gaining equality while not giving anything up.

Clearly men still need to be convinced to support the basic proposition of fairness. While there is a growing desire among fathers to spend more time with their children and achieve better work/life balance, women are still spending twice the amount of time on childcare and housework. So, maybe men need to be sweet talked into it and promised special treats for doing the bare minimum. In an op-ed to help announce the campaign, Sheryl Sandberg and co-author Adam Grant write, “Some men might wonder whether these benefits…for women[ ] might come at their individual expense.” They answer resoundingly and reassuringly: “No. Equality is not a zero-sum game.”

But gender equality is not all going to be all sunshine and roses for men. Even the video starts to hint at why. In order for Ginsburg and O’Connor to thrive professionally, it meant their husbands had to scale back their own careers. There are a limited number of hours in the day; many men may have to reduce how much they work to spend more time on tasks at home. On a larger level, for women to make advances, men will have to step back. There are only so many CEO jobs at the largest and most successful companies. There are only so many seats in the Senate. There is just one seat in the White House. If those jobs move from being male dominated to half female, some men lose access to power.

Men also shouldn’t get a treat for embracing basic fairness. In the op-ed, Sandberg and Grant argue that we have to go beyond “the usual focus…on fairness” and “articulate why equality is…the desirable thing for us all.” To all the men reading it, they make many promises: happier marriages, longer lives, and even more sex. If a more balanced, less conflicted partnership “isn’t exciting enough,” they write, men should consider this fact: “Couples who share chores equally have more sex.” One man asked his wife as he picked up a pile of dirty clothes whether he was doing “Lean In laundry,” which apparently means laundry that gets rewarded with sex. Beyond the disturbing, if societally pervasive, idea that sex is a prize women bestow on men and not an act they partake with equal desire, it tells men they are doing something special to be rewarded when they don’t act like lazy children.

Still, Lean In and Sandberg’s focus on men is welcome. Too many of these conversations are by and about women as if fathers don’t exist. But just as the original Lean In was criticized for focusing on the individual over the systemic—it mentions a lack of child care, paid leave, and flexibility at work while spending more time on the “barriers that exist within ourselves”—we have to think about systemic solutions that get men more involved and not just rely on them to voluntarily change our entire society.

One huge piece of that is paternity leave. When men take leave, truly remarkable things happen. They become more invested parents, which means they’re more likely to take on their half of the work raising a child later in its life. It also increases how much time they spend on other household duties, which gives mothers more time to work longer hours at full-time jobs. That also helps boost mothers’ wages.

But men need to be offered paid leave in order to take it and to see that it’s a common practice for other men to leave work when their children arrive. Currently, just 15 percent of American men get paid leave at their jobs.

The tug of war between having a family life and having a career is slowly but steadily becoming understood as not just afflicting women, but both genders. President Obama recognized as much in his recent State of the Union address when he called for affordable child care not to be seen “as a woman’s issue,” but as “the national economic priority that it is for all of us.” Lean In Together is a partial step toward a conversation that is gender neutral. But we can’t sugar coat what it will take to achieve real gender equality at home and at work.