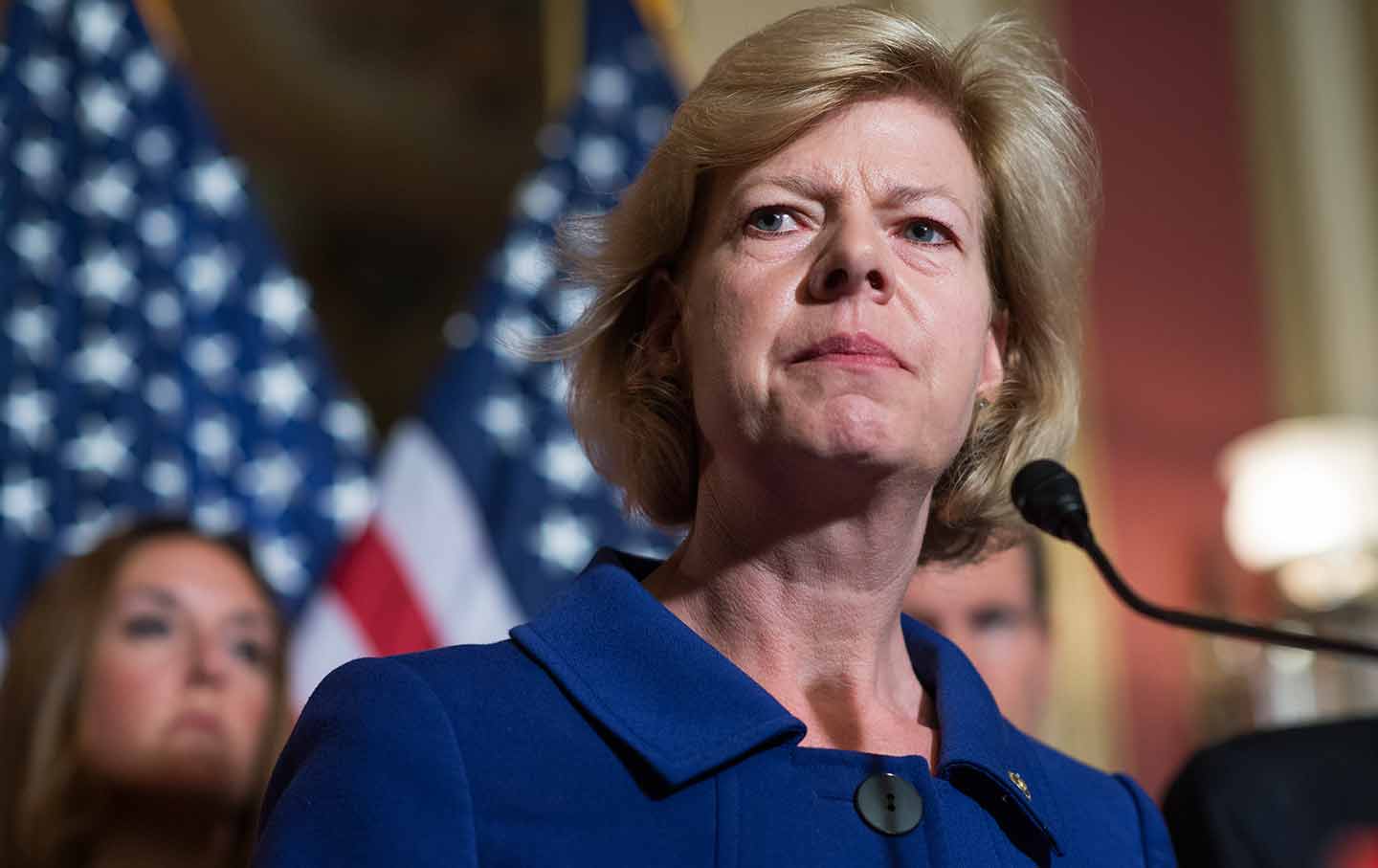 Wisconsin Governor Scott Walker grabbed again for the national spotlight Thursday and Friday, trying to pick a fight with Democratic Senator Tammy Baldwin over her principled objections to President Trump’s nomination of Judge Neil Gorsuch for the Supreme Court vacancy that Republican senators refused to fill during the final year of Barack Obama’s presidency.

But Baldwin refused to let Walker get away with it—and in so doing she showed Democrats, independents, and responsible Republicans how to respond to the extreme partisanship of Republican political careerists who encouraged the obstruction of Obama’s nomination of Judge Merrick Garland last year but now demand the immediate and unquestioning advancement of Gorsuch.

After Trump announced his nomination of a rigid right-wing judicial activist to the high court, Baldwin said: “The importance of the Supreme Court and the decisions they make have a profound effect on the daily lives of all Americans so I will do my job to fully review Judge Gorsuch’s record.”

“Your opportunity to weigh in on Gorsuch ended with your short-lived Pres campaign.” —Tammy Baldwin to Scott Walker

In this era of constant communication and instant fact-checking, it did not take long for Gorsuch’s record to be revealed.

“Judge Neil Gorsuch is a disastrous choice for the U.S. Supreme Court—especially now, given the president’s repeated demonstrations of contempt for our democratic institutions,” observed Nan Aron, the president of the Alliance for Justice, who explained that:

This shows us how vital the federal courts are as a check against unconstitutional and erratic acts by the other branches. Judge Gorsuch’s record shows no sign that he would offer an independent check on the dangerous impulses of this administration. What it does show is that he would put the agenda of powerful special interests ahead of the rights of everyday people, and work to undermine countless laws that protect consumers and workers; safeguard clean air and water; ensure safe food and medicine; and protect civil rights. He would also endanger women’s rights and the rights of LGBTQ communities.

People for the American Way produced a detailed indictment:

* Gorsuch has consistently advocated and ruled against workers and in favor of big corporations. He’s argued for limiting class-action lawsuits against corporations and has ruled against women bringing suits that challenge gender discrimination in the workplace. Such Corporate Court jurisprudence leads to the elevation of corporate interests above the interests of the people, who the Constitution was meant to serve and who the laws were written to protect.

* He was one of the original judges in the Hobby Lobby decision, in which the US Court of Appeals for the Tenth Circuit ruled that corporations are people and that they can refuse to cover birth control as part of their employees’ health insurance. The ruling that Gorsuch joined disturbingly allowed corporations to use religion as a guise to discriminate against women.

* He ruled that a police officer did not use excessive force when he killed a young man by shooting him in the head with a stun gun, contrary to his training manual. The man had been stopped by police after he admitted that some marijuana plants were his, at which point he ran off. At no point had he committed any violent acts. At a time when the abuses of our criminal justice system are becoming a national crisis, we cannot confirm a justice who does not understand the role of the Supreme Court to protect the most vulnerable among us.

* Gorsuch has supported overruling the so-called Chevron doctrine, an established Supreme Court rule deferring to administrative agencies’ interpretation of ambiguous statutes. Even Justice Scalia rightly noted, “[I]n the long run, Chevron will endure and be given its full scope” because “it more accurately reflects the reality of government, and thus more adequately serves its needs.” Overruling this precedent would cause far-reaching repercussions and serious harm to everyday Americans. The doctrine is crucial for worker protections, scientific advancement, and more.

On Thursday, after reviewing the record, Senator Baldwin announced:

Judge Gorsuch should be held to the same standard that Supreme Court justices have been held to previously and President Trump needs to earn 60 votes in the Senate, but I am not one of them. I have a number of concerns about this nominee’s deeply troubling record, particularly his rulings against disabled students, against workers, and against women’s reproductive health care.

Baldwin, who is up for reelection in 2018, refused to play political games. She was open about her position and the reasons for taking it. In this, she followed the tradition of Gaylord Nelson, who as a Wisconsin senator challenged Democratic and Republican presidents on matters of conscience and constitutionality.

Walker ripped into Baldwin, complaining on the Trump-preferred medium of Twitter that “Sen. Baldwin is out of the mainstream” and griping that she had taken a stand before senators had gone through the motions of holding photo-op meetings with Gorsuch.

Baldwin is not one for wrangling on social media. But, this time, she put Walker in his place, tweeting: “Your opportunity to weigh in on Gorsuch ended with your short-lived Pres campaign. Focus on fixing WI’s roads and bridges. #priorities…”

Walker lost it, unleashing a 24-hour Twitterstorm tirade of 16 Trump-style attacks on residents of the state capital city of Madison, liberals, and Baldwin herself. But he did not respond regarding his priorities because, of course, he has no defense.

Scott Walker cannot overcome his obsession with national politics. He began plotting a 2016 presidential bid during his first term as governor—publishing a self-congratulatory campaign book, jetting off to first-primary and -caucus states, making much-ridiculed trips abroad and blowing interviews so horribly that they became the stuff of legend.

Walker even suggested that his experience wrangling with teachers and nurses over labor law in Wisconsin had prepared him to take on threats to the United States. Walker’s troubled run for the Republican nod anticipated Trump’s candidacy. But when the more agile and aggressive Trump entered the race, he shredded Walker. “Wisconsin’s doing terribly. It’s in turmoil. The roads are a disaster because they don’t have any money to rebuild them,” the billionaire declared. “The schools are a disaster. The hospitals and education was a disaster…”

Walker never recovered. His poll numbers collapsed and he was out of the running in short order. His ambition for the national stage remains, however, as does his inability to make Wisconsin his first priority. But Walker has met his match in Baldwin, who answered the governor’s round-the-clock repetition of Washington-insider talking points with a simple message: “This Wisconsin Senator is standing up for the people of Wisconsin, not powerful interests in DC.”