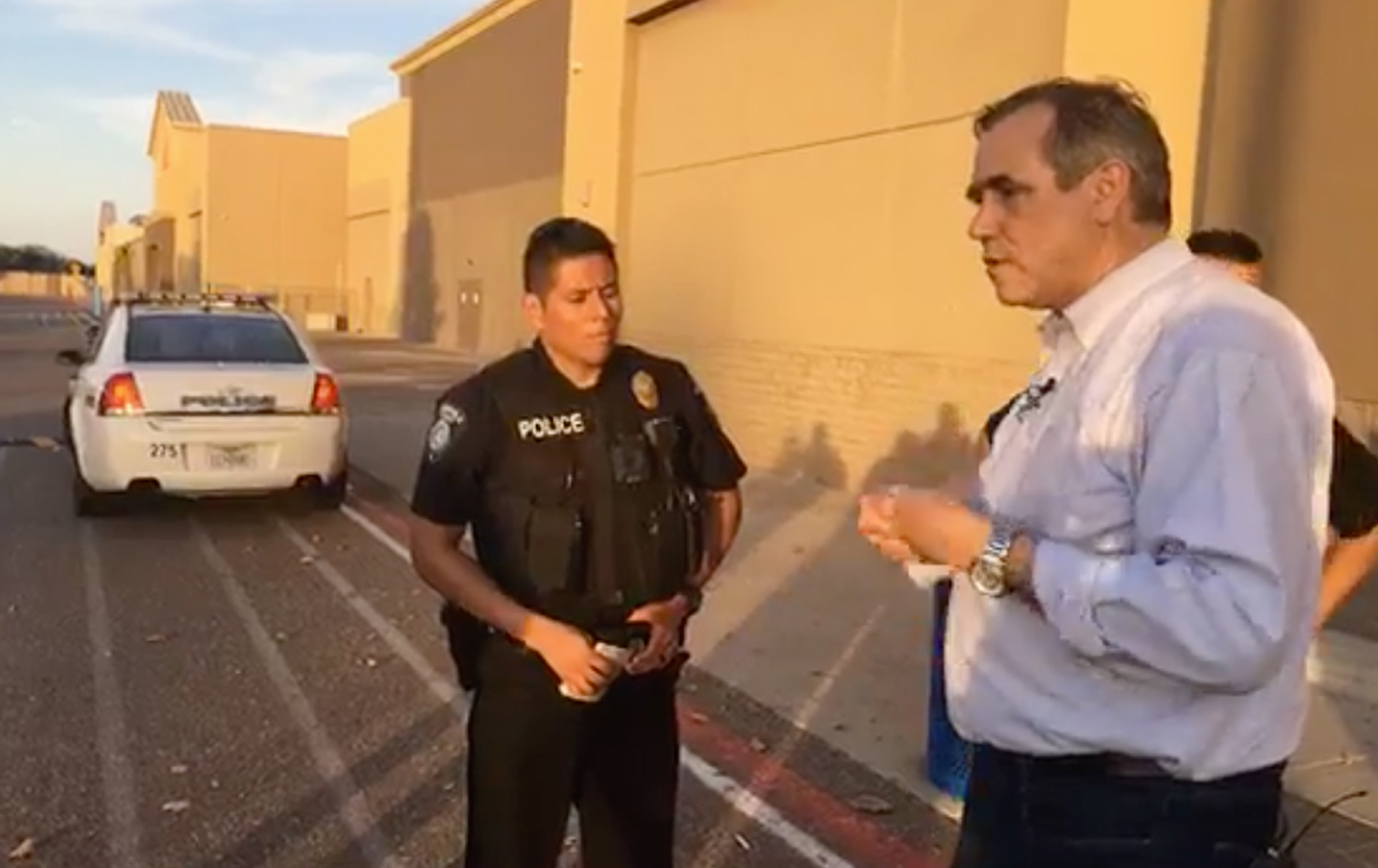 When Oregon Senator Jeff Merkley tried to visit a detention center for child immigrants in Brownsville, Texas, last weekend, he was turned away. The Facebook Live video of his journey through the bureaucratic shadows went viral. In the 20 hours after it was shared, it was viewed 1.1 million times.

As viral videos go, it was rather low-drama: it mostly featured Merkley standing around in the hot Texas sun for almost a half hour, waiting for a supervisor of the nonprofit Southwest Key shelter to come tell him why he could not enter the facility. One high point was when the senator inadvertently shared his personal cell-phone number with his million-plus viewers, trying to get someone in authority to return his call.

Last Night Was Joe Biden’s Moment. May There Be Many More.

The Story Behind Your Salad: Farmworkers, Covid-19, and a Dangerous Commute

“I think it’s unacceptable that a member of Congress is not being admitted to see what’s happening to children whose families are applying for asylum,” Merkley told the cameras while he waited. “Can you imagine? You come to this strange land.… You’re seeking asylum, and the first thing that happens when you get here is you’re torn away from your parents?… America has never done this before!… The intention is to hurt the children, cause the children trauma and discourage people from seeking asylum in the United States of America.”

Eventually, the site supervisor came out—to get the local police to tell Merkley he had to leave the property. Merkley politely complied.

Not surprisingly, the White House quickly trashed the Oregon Democrat. “Senator Merkley is irresponsibly spreading blatant lies about routine immigration enforcement while smearing hard-working, dedicated law enforcement officials at ICE and CBP,” read a statement from Deputy Press Secretary Hogan Gidley. “No one is taking a public safety lecture from Sen. Merkley,” it added, “whose own policies endanger children, empower human smugglers and drug cartels, and allow violent criminal aliens to flood into American communities.” The statement went on to blame Merkley for crimes committed by an immigrant in Oregon that took place before Merkley was even elected to the Senate.

Maybe more disappointing, The Washington Post fact checker gave Merkley “three Pinocchios” for saying that it was Department of Health and Human Services policy “not to admit anyone into these centers.” Officials claim that they will consider admitting members of Congress to inspect the facility if given two weeks notice, although Merkley says he is not aware that any member of Congress has asked for or been given such access. Merkley said he was told he might be allowed in with two weeks’ notice, but was not promised it. At a time when the Trump administration has made it policy to rip immigrant children as young as 13 months old away from their parents and warehouse them in undisclosed locations, one of our nation’s greatest newspapers decided to give the White House the benefit of the doubt on its inspection policy, while essentially calling a respected Democratic senator a liar. Democracy dies in darkness, indeed—but it also dies when journalists swallow the unproven assertions of administration flacks and trash a senator for doing his job.

I spoke with Senator Merkley by phone on Wednesday afternoon to hear him describe what he saw in Brownsville, as well as an immigrant processing center in McAllen, Texas. He is introducing legislation to allow members of Congress to inspect child-detention facilities with 24-hour-notice. The interview has been lightly edited for length and clarity.

You actually visited at least two detention sites over the weekend. Your Facebook Live broadcast from the converted Walmart in Brownsville went viral, but you also visited a child-immigrant-processing center in McAllen, Texas, where you couldn’t take photos. But it seems as though your visit there was more harrowing.

The makeup of that processing center is shocking when you see it, but let me go to the heart of the issue. The issue is this new policy of, when families are seeking asylum, their children are torn away from them and sent who knows where. The parents are beside themselves not knowing what happened to their kids, and they never know if they’ll see them again. The kids are going through the second version of trauma. Families seeking asylum have by definition experienced trauma abroad, and perhaps trauma en route. So finally they get to the border, and they think “finally, we’re safe.” But instead they’re put into this prison-like facility, and separated, and put through this new drama.

Can you describe to me what you saw there?

I’ll tell you what was very difficult to see. One room had smaller cyclone fences—they look like the way you construct a dog kennel. They’re larger, but that’s the thought that comes to mind when you see them. Then they have these space blankets [light foil blankets], which is a very strange sight, to see kids using a space blanket as a cushion—but they don’t provide any cushion—or as a cover for privacy. There’re no mattresses in that section.

After they go through interviews, they go into a big warehouse. I called them cages, and the White House said that’s unfair, they aren’t cages. Well, call it a cell, then. It’s a cyclone-fence-constructed area. There were all these boys in this big enclosure, maybe three to four dozen boys, and they lined up, from smallest to largest, to get ready to go eat. The tiniest kid at the front of the line, he was knee-high to a grasshopper; he was 4, maybe 5 years old. They go up to age 16 or 17.

I understand that the McAllen facility operated under the Obama administration, to accommodate the surge of unaccompanied minors from Central America we saw in 2014. Do you know whether the children you saw last weekend are mainly unaccompanied minors, who came here alone, or whether they’re mainly kids who’ve been separated from their parents under this new DOJ policy?

Well, some may have come as unaccompanied minors, but many have not. The 4-year-old, it’s extremely unlikely he did, I suppose an older brother might have brought him across, but he was just so, so tiny. Many of them are kids who were taken away from their parents, in that facility. I asked: “Where are the kids who’ve been separated from their parents?” And they said “Here.”

But here’s the thing—as soon as they take the kids away from their parents, they call them “unaccompanied minors” too! I asked, which are the kids who came alone, and which came with their families, but no one could tell me. We do know that during a 12-day period in May 658 kids were separated from their families. We know that the number of immigrant children detained without parents went up 21 percent from May to June.

Another question is: Where do the kids end up, and can the parents reach them? They told me, “Oh yes, they get an A code,” and I asked, “Well, what’s an A code,” and it turns out it’s an “alien code,” a number where they can be tracked through the system. So it’s really not a difficulty for parents to find their children, they said. But the children are actually in one agency, the Department of Health and Human Services, and the parents are in another agency, the Department of Homeland Security. And according to immigration advocates I spoke with, they’re saying it’s actually not easy to track down the kids. The younger kids may be in a foster family, where the foster family doesn’t speak Spanish.

If a family is set up with a hearing for asylum, and they’re kept together, well, if they’re denied asylum, they can go back together. This way…

[Laughs]…for saying they have a “policy” of not allowing visits…. Yeah, I know, I guess I should have said they have a “strategy.”

But they say they will accommodate members of Congress with two weeks’ notice?

Yes, they told me I could apply, and I might be able to get in within two weeks. I might be. But if members of Congress can’t be assured they’ll be allowed in, then it’s a de facto policy [not to let them in]. Also: In two weeks, they can clean it up and make it all happy-face. I want to see how it’s operating on a day-to-day basis. And look, we all have top-secret clearances. I don’t know why we can’t go there and have them take us around, and say to us, “Here is who we have in here.” And then we can ask: “Do you have the resources that you need? To treat kids with trauma and anxiety?” And we can also ask: “Let us see the kids you’ve taken from their parents. Let us see how they are.” That’s the big issue, that they’re being separated in the first place. That’s the bottom line unacceptability here.