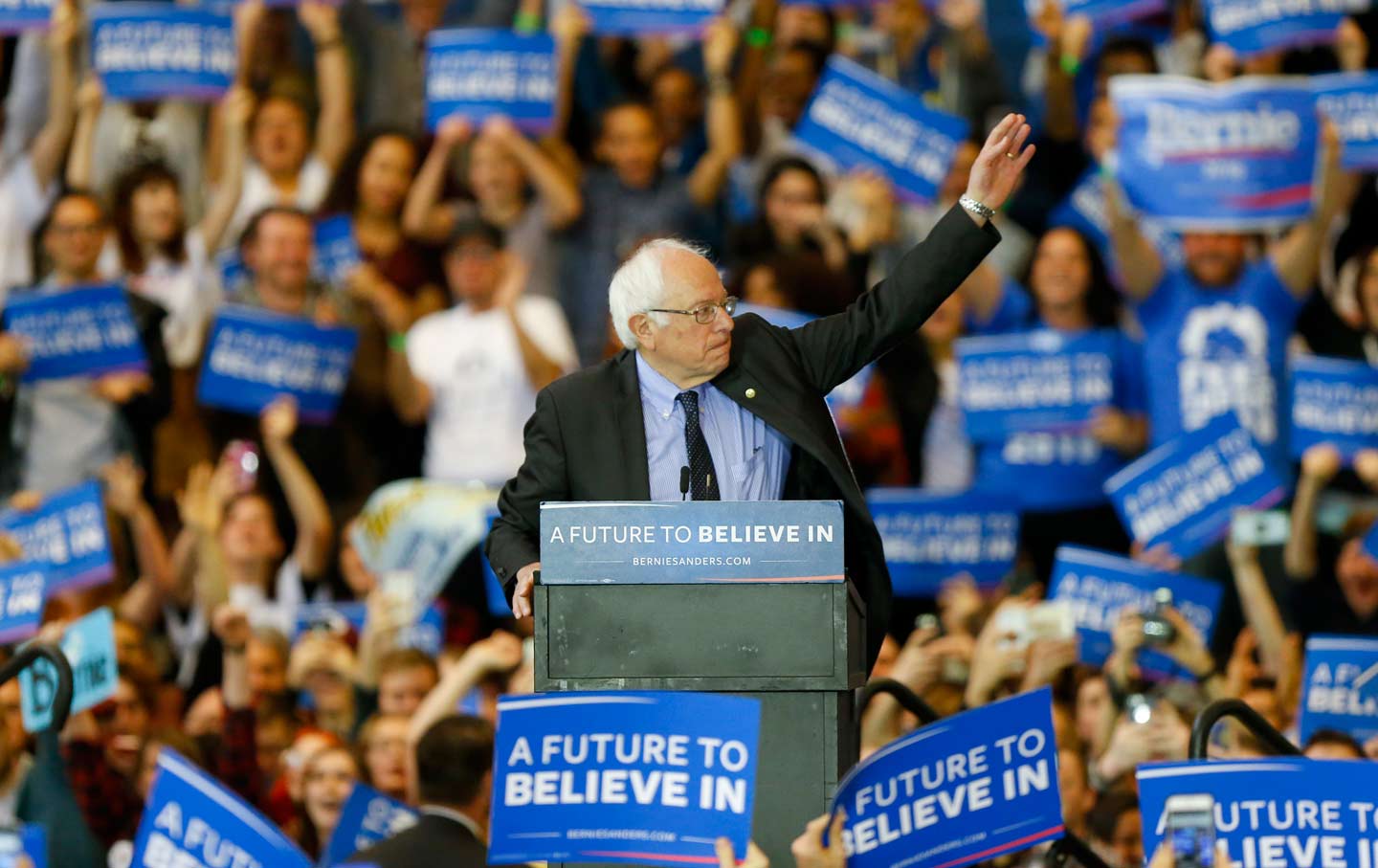 Can Ryan Hughes get lightning to strike a second time? A month before the Michigan primary, polls showed Hillary Clinton ahead of Bernie Sanders by around 30 points. Yet when the votes were counted, Sanders scored a stunning upset that kept his campaign’s hopes alive and sent Hughes, his Michigan state director, to Pennsylvania, where the most recent poll before the April 26 primary gives Clinton a 25-point lead.

“We’re going to be competitive here,” Hughes promises when we meet for a drink in Philadelphia’s Center City. It’s only his third day in the state, and he’s been constantly on the move, from Scranton—where the campaign opened its first office on March 22—to Philadelphia, Pittsburgh, and points in between. “Why Scranton?” I ask, since the town is associated more with Joe Biden, who was born and raised there—as was Hillary Clinton’s father, Hugh Rodham—than with the Brooklyn-born Sanders.

“So many communities in this state have been left behind.”

“Scranton has been decimated by trade deals,” Hughes replies. “And it reminds me of my hometown: Syracuse, New York—a place where people work factory jobs paying $8 or $9 an hour.” Hughes, who said he got hooked on politics at a public school whose student body was “60 percent black, 20 percent Vietnamese, and 20 percent white,” added: “We want to take the senator’s message to places that haven’t seen a presidential campaign in a long time.”

The last time McKeesport, Pennsylvania, figured in national politics was 1947, when John Kennedy and Richard Nixon came here to debate whether labor unions had too much power. Today, the effects of a half-century of decline in both union strength and American manufacturing are impossible to ignore.

“So many communities in this state have been left behind. No one’s moving here.” My guide is John Fetterman, the mayor of Braddock, Pennsylvania, and a candidate for the Senate. Fetterman’s front door is literally across the street from US Steel’s Edgar Thomson Works, where Andrew Carnegie introduced the Bessemer converter into the United States, and which is now the last integrated mill in the Mon Valley.

“This place has one bus line to Pittsburgh—and they tried to cut that last year,” Fetterman continues. As we drive past streets full of abandoned houses and ruined churches, he tells me that Clairton, our next stop, has the worst air quality in the country thanks to an enormous coke plant on the banks of the Monongahela River. “American Steel production was gutted by NAFTA,” Fetterman says. “And if the coke works goes, I don’t know what the folks here will have left.”

With the constant pinging of the seatbelt warning in the background—at six-foot-eight, Fetterman barely fits into the cab of his pickup truck—we arrive in Monessen, home to another coke plant, this one owned by the Indian billionaire Lakshmi Mittal. Two-thirds of Braddock’s residents are African-American, and Fetterman has no patience for Donald Trump’s race-baiting or xenophobia. But “if Trump’s support is kind of the finger that older white Americans are giving to this country for breaking its promises and leaving them behind, I can kind of understand that,” he adds.

“We’ve had a Democrat in the White House for eight years. And the Democrats are in control of Allegheny County. If you look around here, you have to wonder if it’s made much of a difference.”

“Trump is dangerous,” Damon Young tells me. “I look at him as a proxy. He’s dangerous because he’s popular.” As editor in chief of VerySmartBrothas.com, a website aimed at African-American hipsters—but which also occasionally, and hilariously, deconstructs the folkways of white people—Young has no doubts about the cultural impact of the Obama presidency, from code-switching to the fact that “if you’re an 18-year-old high-school senior, the president has been black since you were 11 years old.”

Yet he, too, worries that uneven prosperity has left his community behind. “Pittsburgh used to be a thriving steel town, then a dying steel town. Now it’s this education and tech hub—supposed to be the ‘most livable city.’ That status doesn’t necessarily reach down to the black people who live here.”

We’re at a bar in East Liberty, a rapidly gentrifying neighborhood filled with artisan bakeries, yoga studios, and newly opened Sanders and Clinton campaign offices. “I like having a nice place to drink—even if I am the only black person here,” says Young. “But all these million-dollar lofts and condos: Who are they for?”

“Just up the road here is Bakery Square”—an upscale development on the site of an old Nabisco factory. “I used to play basketball in courts across the street. At night you could smell the bread. Two miles away, in Wilkinsburg, six people got shot a couple of weeks ago.” Places like Wilkinsburg and Braddock are where those displaced by Pittsburgh’s revival end up—communities without adequate public services and with little political clout.

The next day, Molly Nichols of Pittsburghers for Public Transit—a few blocks from East Liberty—shows me exactly how gentrification has pushed African Americans out to neighborhoods beyond the reach of city bus lines. “Our organization is not very invested in electoral politics,” she says. “But I’ve seen bus drivers excited about the way Bernie is talking about taking on the billionaires. And the way Sanders is energizing young people is really powerful.”

“Personally, I lean toward Sanders,” Young tells me. “Perhaps some voters lean toward Bernie, but they think Hillary has a better chance to beat Trump. What it comes down to is pragmatism.”

“When I think about who needs a political revolution in this country, I think of my dad.” Waleed Shahid, political director of Pennsylvania’s Working Families Party, is speaking at the opening of the Sanders headquarters in South Philly. “He came to this country as an immigrant. Worked as a parking attendant. Eventually promoted to manager. Put all of his savings into a house—which he lost in the 2008 crash. Since then, he’s had his hours and wages cut—by the company he’s worked for since 1974!”

Everywhere I go in Pennsylvania, I keep coming across the Working Families Party: in Lancaster, in Reading, even in Bethlehem, where the shell of the former Bethlehem Steel plant—once the second-largest mill in the country—now houses a hotel and casino complex owned by Republican donor Sheldon Adelson. After spending the night in this belly of casino capitalism, I speak with Eric Fritz, a veteran labor organizer who has returned to his hometown to help run the local Sanders campaign and recruit candidates for the WFP’s “pipeline.”

“Our mission is to harness all that energy, all those ambitions” stirred up by the Sanders campaign “and apply them on a local level,” Fritz says. “My job is to figure out how we channel that into changing Lehigh Valley…. On April 27, the Sanders campaign will focus on another state,” he adds. “A lot of their people will move on to California. But I’ll still be here in Bethlehem.”

Will Bernie Sanders win Pennsylvania—a state won by Hillary Clinton in 2008, and where she has the support of nearly every elected official (Fetterman is one of the few exceptions) from the governor on down? As I left Philadelphia—a city whose powerful Democratic machine is fully aligned behind Sanders’s opponent—it seemed unlikely. Yet stranger things have already happened in this campaign. “The biggest thing keeping people from supporting Bernie is electability,” says Shahid. “If Sanders wins in New York…”

Win or lose, Shahid and his colleagues recognize the scale of what they’re trying to accomplish. “If our purpose is to make a politics that serves all Americans fairly regardless of zip code, that’s a monumental task,” he acknowledges. “But if we do it right, we have a chance to redefine American politics in the 21st century.”