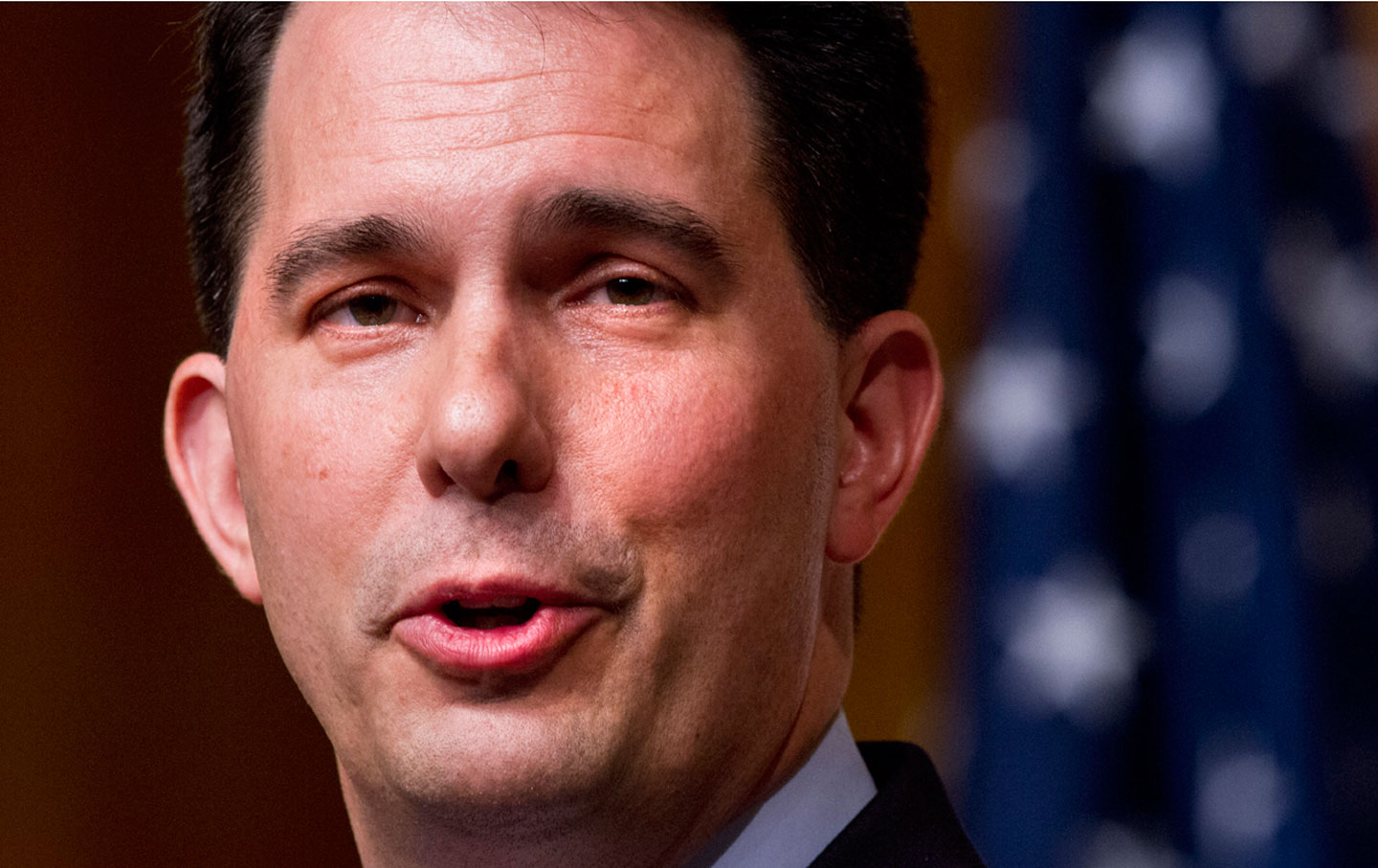 Back in the pre–Donald Trump era of American politics, Wisconsin Governor Scott Walker was briefly the front-runner for the Republican presidential nomination. Polls had him 14 points ahead of his closest rival in the first-caucus state of Iowa, and 10 points ahead in the first-primary state of New Hampshire.

From February through May, he frequently led national polls. As late as August 6, his numbers were strong enough to secure Walker a spot next to Trump in the ranked-order positioning for the first GOP debate.

As this week’s second GOP debate approaches, however, Walker’s poll numbers are so bad that he could soon slip off the main stage.

A new ABC News/Washington Post poll has Walker at just 2 percent nationally—putting him in a tie for ninth place. The latest CBS/YouGov poll has him falling to eighth place in New Hampshire with just 3 percent. And last week’s Quinnipiac poll from Iowa, Walker’s “firewall” state, had him in 10th place with 3 percent.

Even in Wisconsin, Walker is struggling. A Marquette University Law School poll conducted in August still had the governor ahead in the Republican race. But 75 percent of likely Republican primary voters said they were supporting someone else or were undecided.

Things are so bad for Walker that, after he cancelled a number of scheduled appearances following Wednesday night’s debate (including what was supposed to be a major address to California Republicans), there was a flurry of speculation that he would follow the lead of former Texas governor Rick Perry and quit the competition.

Walker has been running for president for three years—ever since massive infusions of money from out-of-state billionaires such as the Koch brothers and Sheldon Adelson helped him to set off a popular uprising that culminated in an attempt to recall him from office. He sees himself as the truest heir to the legacy of Ronald Reagan, so much so that the governor made a pilgrimage last week to the small Illinois college from which Reagan graduated. And Walker is not about to let go of the fantasy that he can pick up where the former president left off.

“The record shows, this guy is a bad bet for working people.” —Annette Magnus on Scott Walker

Unfortunately, though the billionaires may still appreciate his service, they are not riding to his rescue this time. And Walker’s attempt to repurpose himself as a Trump-lite populist—with wild talk about building a fence along the Canadian border, a crude attempt to blame President Obama for anti-police sentiment and a promise to “wreak havoc” on Washington—have been so shrill and ill-thought that they have earned him ridicule rather than a second look.

“Now, some formerly admiring political insiders describe his campaign as ‘dreadful’ and ‘completely unworthy of Scott Walker,’ and wonder if he can recover…,” writes the conservative National Review, a publication that has often been favorably disposed toward the governor. “Above all, the past few months have amplified questions about whether Walker’s campaign and, more importantly, the candidate himself are built to thrive on a stage larger and less forgiving than Wisconsin. Political observers had long worried about whether he had the charisma to succeed in a presidential contest. Now, there are doubts about his substance. At times, the candidate and his operation have appeared accident-prone and politically immature.”

The measure of Walker’s political immaturity has not come in his missteps and fumbles. Few candidates jump onto the national stage with perfect grace, and if Trump’s run has proven anything, it is that this year’s Republican electorate is more than ready to forgive an over-the-top line or a misguided move.

Rather, the measure of Walker’s political immaturity has come in this electoral careerist’s inability to evolve his message beyond his comfort zone.

Walker has never been a policy guy. He has always been more than happy to borrow talking points and programs from corporate-funded “think tanks” and policy shops like the American Legislative Exchange Council. And when a gambit works—not practically, mind you, but politically—he repeats it.

Thus, as he seeks to reset his presidential run, Walker is returning to the strategy he used to gain recognition (and the support of corporate special interests and billionaire campaign donors) as a state legislator, as Milwaukee County Executive, and as governor: promising to employ the power of government to attack the ability of workers to assemble and to petition for the redress of grievances.

Walker has never been interested in winning an intellectual or political debate over whether workers have a right to organize and collectively bargain. His strategy has always been to rewrite the rules so that unions face barriers at every turn to their very existence. A long-time supporter of so-called “right to work” laws and an enthusiastic battler against public-sector labor organizations, he embraces the notion that weakening unions will somehow lead to prosperity.

Never mind that his austerity fantasy has been disproven in Wisconsin, where repeated attacks on public- and private-sector unions have failed to yield the boom Walker promised. Never mind that Walker’s “divide-and-conquer” tactics and bumbled economic strategies have caused his approval rating in Wisconsin to collapse to 39 percent. Walker is sure that attacking unions is where it’s at—so much so that he persists in claiming that refusing to respond to protests by Wisconsin’s nurses, teachers, and librarians has prepared him to see off international threats.

Walker knows what he “knows.” Thus, notes Scot Ross, the executive director of the group One Wisconsin Now, “he’s now trying to boost his sagging poll numbers by promoting the same kinds of attacks on working people that vaulted him to national prominence while conveniently ignoring how his policies left Wisconsin in shambles.”

In fact, Walker is upping the anti-union ante. He’s traveling to Las Vegas to unveil a “new” plan to use the power of the federal government to attack the right to organize and the right to collectively bargain—indeed, to attack the very right of unions to exist.

Walker’s plan, according to an Associated Press review, would use fresh federal laws and executive orders to:

These are extreme—and extremely wrongheaded—proposals. If enacted, they would extend economic inequality and wage stagnation. As such, they embody the austerity agenda that has stalled out economies in other countries, and that has slowed the economy in Walker’s Wisconsin.

In Walker’s imagination, if he can just be anti-labor enough he will be able to renew his candidacy. The problem for Walker, and for anti-union zealots in general, is that few Americans—be they Democrats or independents or Republicans—are so fiercely opposed to the right to organize and collectively bargain that all other issues become secondary.

Gallup polling data shows that approval of unions has spiked in recent years—especially since Walker and other Republican governors started attacking organized labor.

Sixty-one percent of Americans now say they want unions to maintain as much influence as they now have or to develop more influence. Americans have dramatically more negative attitudes toward corporations and banks than they do toward unions.

Notably, a substantial number of Republicans (32 percent) still say they approve of unions. And when Republicans are asked about union priorities—higher wages, fairer treatment in the workplace, fair trade—the numbers are even more supportive.

Walker decided to announce his anti-labor agenda in Las Vegas, a union town.

That was a poke in the eye to organized workers (and, undoubtedly, an appeal to notoriously anti-labor Las Vegas casino-owner Sheldon Adelson). This gave Annette Magnus, the executive director of Nevada’s Battle Born Progress group, an opportunity to declare, “The record shows, this guy is a bad bet for working people.”

Walker is a bad bet for workers.

But Walker’s latest gamble is also a bad bet for Walker. The American people simply are not as anti-union as the governor’s active imagination tells him they are.