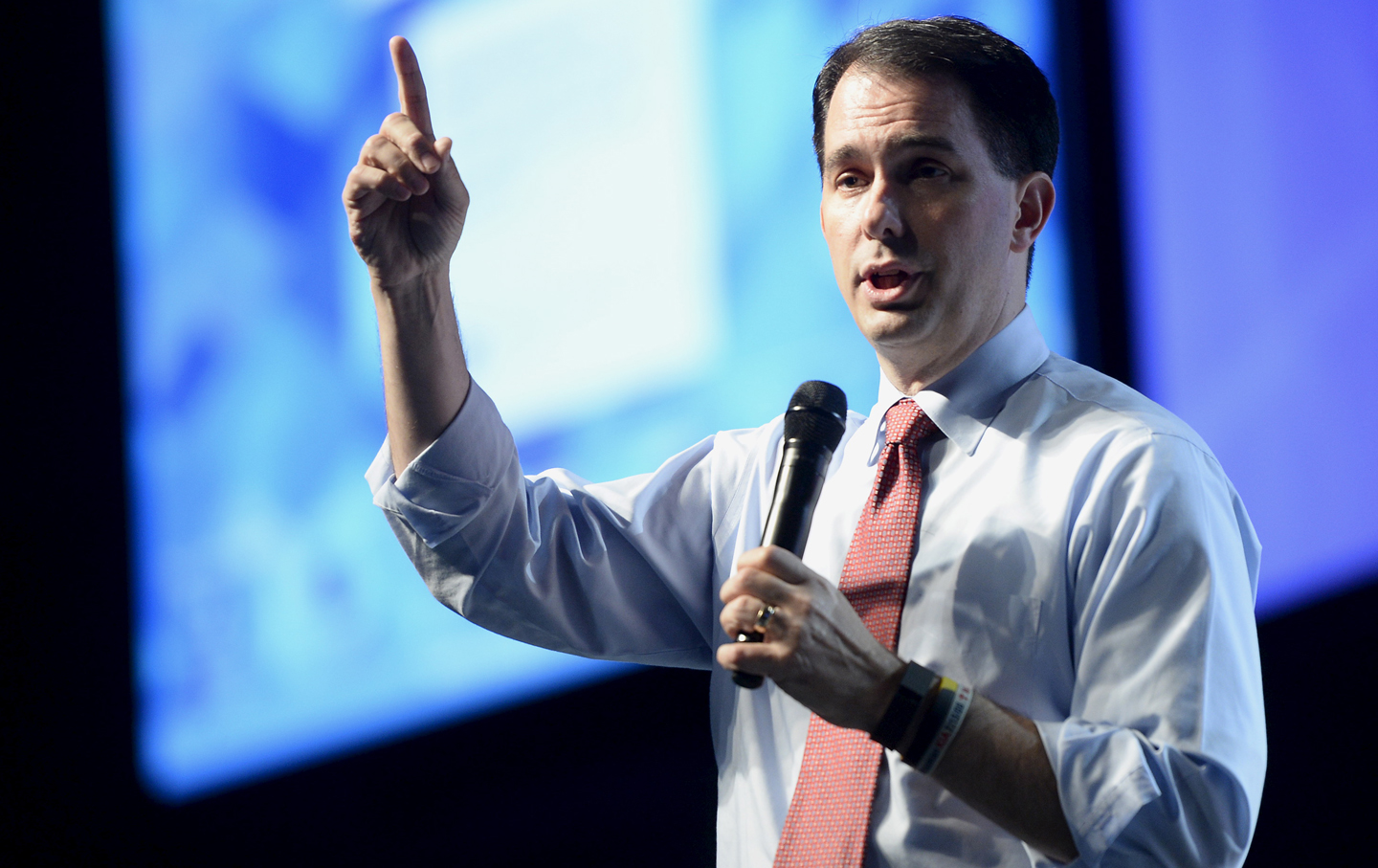 Republican presidential candidate Scott Walker talks about his campaign during the Western Conservative Summit in Denver on June 27, 2015. (Reuters/Mark Leffingwell)

But Scott Walker has gone Bush one better. The governor of Wisconsin and Bush rival for the 2016 Republican presidential nomination just codified the concept.

The state budget that Walker signed on Sunday as Wisconsin’s governor includes a provision that eliminates a historic guarantee that factory and retail employees “must get at least 24 consecutive hours of rest for every seven-day stretch” of work.

That does not sound very worker-friendly. And that’s cool by Walker.

The Wisconsin governor is running for the presidency as the guy who cracked down on workers and their unions—and who delivered for corporations and their CEOs—and the budget he just signed offers a signal of just how far he and his allies are willing to go.

Wisconsin’s Republican-controlled legislature dutifully delivered a budget to Walker before his announcement. But the document was so fundamentally flawed that a dozen Republicans in the state Assembly and Senate joined Democrats in opposing it.

The Republicans did not say much about why they were voting “no,” although the prospect of having to defend cuts to higher education, funding schemes that threaten rural schools, blows to programs that care for the elderly and the disabled and fiscally irresponsible borrowing undoubtedly weighed on the 11 Republican representatives and one Republican senator who refused to support the budget. So too, surely, did concerns about having to explain a budget that rips up prevailing wage, living-wage and workplace protections for workers who have already taken hard hits.

If the Republican “no” votes were cast quietly, the Democratic “no” votes came with a bang.

State Representative Dianne Hesselbein referred to the measure as the “worst budget ever.”

“The awfulness of this budget is truly extraordinary,” added state Representative Melissa Sargent, another Democrat. “I can’t decide which is worse—the cuts to public education at every level, the attacks on workers, or the dismantling of aging and long-term care programs. Then again, there’s always the disregarding of conservation and natural resources, the preemption of local control, or the kickbacks to special interests—those could be contenders, too. Really, take your pick.”

Walker could have responded to the bipartisan opposition by altering many of the worst sections of the budget, using Wisconsin’s extensive and flexible veto powers. But no one expected that to happen. The budget was built on a framework delivered to the legislature by Walker and he endorsed many of its most unsettling components as they were being debated.

Representative Sargent is right when she says that it is hard to know where to begin objecting to the budget.

But it is notable that this budget continues Walker’s steady assault on workers, wages, and organized labor.

The governor has since taking office in 2011 been perhaps best known for his anti-union stance. He does not run from the image. In fact, he has made his anti-labor fights a central theme as he prepares for the 2016 presidential race. Responding in February to a question about how he would address international challenges such as the threat posed by Islamic State in the Middle East, Walker said, “If I can take on 100,000 protesters, I can do the same across the world.”

The 100,000 protesters Walker was referring to were Wisconsin teachers, nurses, snowplow drivers, police officers, and firefighters who were objecting to the governor’s sweeping assault in 2011 on the collective-bargaining rights of public employees.

“The awfulness of this budget is truly extraordinary.” —Wisconsin State Representative Melissa Sargent

The 2011 fight in Wisconsin put Walker on the map politically, taking one of many governors in the “Republican wave” year of 2010 and making him a favorite of the billionaires who have for years funded anti-labor initiatives. It is not too much to say that Walker is a presidential contender because of his fights with labor, and as he formally launches his presidential run he is highlighting those fights.

But nothing makes the point quite so powerfully as Walker’s record since 2011, which has steered ever more aggressively in an anti-labor direction.

Despite claiming during his 2014 reelection run that he had no interest in advancing so-called “right-to-work” legislation designed to weaken private-sector unions, Walker jumped at the chance to sign a “right-to-work” law earlier this year.

The man who in 2012 said, “I have no interest in a right-to-work law in this state” in 2015 declared that he had always been a “right-to-work” enthusiast and that signing the law “sends a powerful message across the country and around the world.”

What Walker hails as a “good budget” includes:

State Senator Chris Larson, D-Milwaukee, summed things up by saying that the budget was “kicking in the teeth of Wisconsin workers.”

And now the governor who signed it says he wants to do for America what he did for Wisconsin.