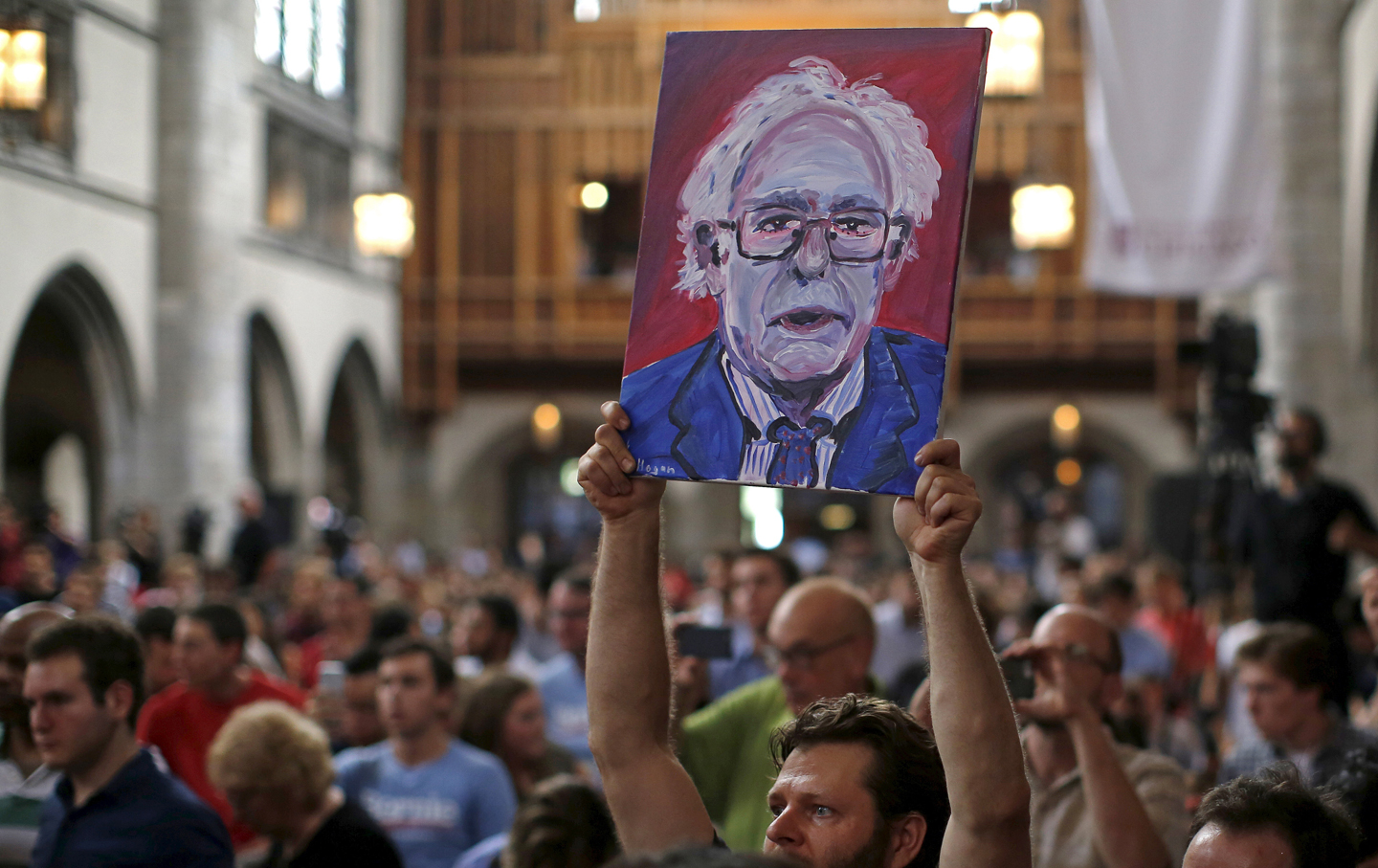 There is a measure of irony in the sudden attention to Bernie Sanders—long and loud in his criticism of big money in politics—as a fundraising virtuoso.

But that was the circumstance of the Vermont senator as his 2016 presidential campaign, which late Wednesday reported raising $26 million in the third quarter of 2015–just $2 million less than the $28 million reported by the campaign of Democratic front-runner Hillary Clinton.

“Sanders nearly matches Clinton in fundraising for third quarter,” read the headline of a Washington Post report. “The ability of the senator from Vermont—who has largely eschewed wealthy backers and fancy fundraisers—to compete with Clinton’s four-decade-old donor network could drastically alter the dynamics of the primary contest.”

The New York Times reported, “Mr. Sanders is rapidly rewriting the rules for big-money fund-raising in a presidential campaign. He raised his [$26 million] with only a handful of fund-raising events. And while precise figures will not be available until the campaigns file formal paperwork with the Federal Election Commission this month, Mr. Sanders appears to be relying overwhelmingly on donors making small contributions.”

The Clinton campaign has raised far more money than Sanders so far in the overall campaign, and it remains on pace to meet a $100 million fundraising goal by the end of 2015. But the most telling comparison was another one noted by the Times: “Mr. Sanders has even outpaced Mr. Obama’s record-breaking campaign from 2008, reaching more than a million online contributions—a mark Mr. Obama did not pass until the Democratic primaries were underway in the winter of 2008, according to Obama fund-raising solicitations at the time. Mr. Sanders has also amassed 650,000 contributors, well more than Mr. Obama had at the comparable point in that campaign cycle.”

As a long-time critic of the current system for financing campaigns, Sanders usually finds himself in the position of criticizing big money in politics. Even as his campaign raced to increase its third-quarter total Wednesday, the senator was urging backers to “chip in $3 before the midnight [Federal Election Commission] deadline as a way of saying you have had enough of the billionaire class buying our elections.”

The Sanders campaign’s approach to fund-raising suggests an alternative model for crowdfunding presidential campaigns. He has attracted 1.3 million small donations (from 650,000 individual donors) and, in the context of contemporary politics, they really are small: In the previous quarter, the senator’s average donation was $33.51. Ninety-nine percent of the donations came in amounts under $250.

But one candidate’s ability to do things differently does not amount to a repair of a broken system. In fact, it can foster the fantasy that it is possible to address the crisis without making necessary reforms.

Reforms remain as necessary as ever. Thus, while the headlines about Sanders this week will focus on his current fundraising, it is more important that earlier this year—with far less attention—he reintroduced a constitutional amendment to effectively overturn US Supreme Court decisions that have struck down limits on campaign spending by corporations and the wealthiest donors. Those decisions have ushered in an era of money-drenched politics in which candidates spend too much time raising money, in which they raise too much money and in which they spend too much money. And in which shadowy networks of special-interest groups and billionaires flood the process with even more money.

The Sanders amendment establishes that

“Nothing in this Constitution shall be construed to restrict the power of Congress and the States to protect the integrity and fairness of the electoral process, limit the corrupting influence of private wealth in public elections, and guarantee the dependence of elected officials on the people alone by taking actions which may include the establishment of systems of public financing for elections, the imposition of requirements to ensure the disclosure of contributions and expenditures made to influence the outcome of a public election by candidates, individuals, and associations of individuals, and the imposition of content-neutral limitations on all such contributions and expenditures.”