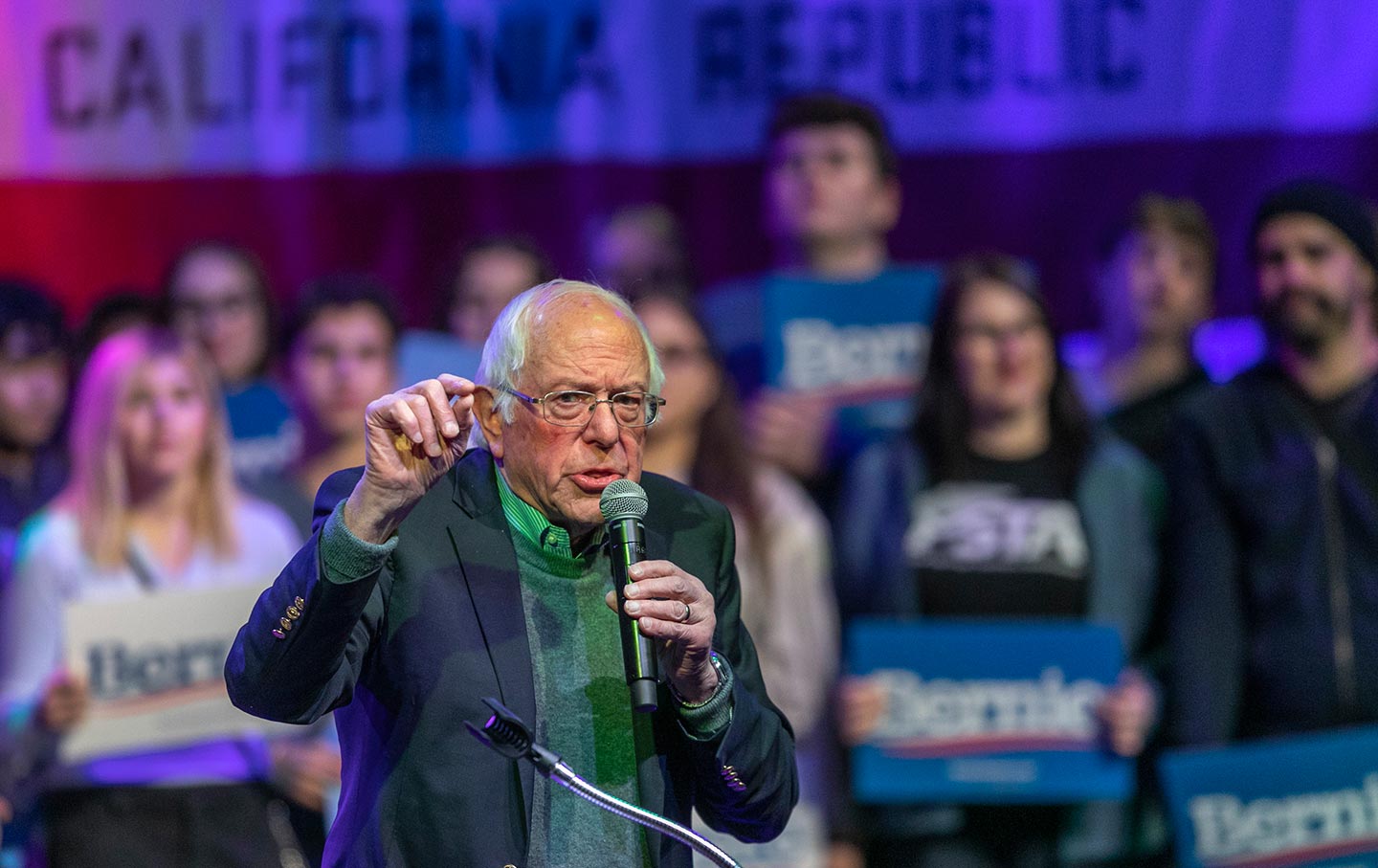 Bernie Sanders’s campaign staff has long complained about a phenomenon they call “the Bernie Blackout”—the tendency of the mainstream media to downplay Sanders for the benefit of other candidates. In early December, campaign official Nina Turner argued on Hill.TV, “I don’t want to see any candidate blacked out, but certainly not a candidate that is polling in the top one or two and certainly is in the top three of the candidates that could get the Democratic nomination. It is wrong and the system is rigged.”

The Bernie Blackout was real enough. Over the past year, Sanders has been the number two candidate in national Democratic polls more often than not, holding a steady lead over all the other candidates except Joe Biden. For a brief period of three months, Elizabeth Warren overtook Sanders, but her support is now receding. Sanders has also been a front-runner by other metrics: He’s raised more money than the other candidates and has a much larger donor and volunteer base. Polling shows him competitive in the three earliest states. If he won those, he’d have a strong tailwind carrying him forward for the rest of the race.

Despite being an impressive candidate, Sanders gets less attention than rivals who by any reasonable measure have less of a chance. Turner’s claim the system is “rigged” is one explanation—but just as likely are nonideological factors. Sanders’s support has been steady, lacking the roller coaster ups and downs that made Kamala Harris, Elizabeth Warren, and Pete Buttigieg more interesting candidates to cover. Sanders’s support has been unusually sticky, which makes him boring in simple horse race terms. Also, since he’s run before, he’s not news in the way many of his rivals are.

Whatever motivated the Bernie Blackout, it’s now over, with both Politico and The New York Times recently laying out the evidence that Sanders is a serious contender.

As Politico notes, “For months, the Vermont senator was written off by Democratic Party insiders as a candidate with a committed but narrow base who was too far left to win the primary.” The news site goes on to observe that “in the past few weeks, something has changed. In private conversations and on social media, Democratic officials, political operatives and pundits are reconsidering Sanders’s chances.”

The New York Times came to a similar conclusion: “With less than six weeks until voting begins, the loyalty Mr. Sanders commands has turned him into a formidable contender in the 2020 race. Despite having a heart attack in October that threatened to derail his second quest for the Democratic nomination, he remains at or near the top of polls in Iowa and other early states, lifted by his near ubiquitous name recognition and an enviable bank account.”

The media shift on Sanders, matched by a change in attitude among establishment Democrats, is one sign that Sanders has a chance. But there are still hurdles the candidate has to clear. The most important barrier is the concern Democratic primary voters have over electability.

Democrats really hate Trump and want to back a winner who can defeat him. Nearly two thirds of Democrats prefer a candidate who can defeat Trump to one who shares their values. The electability issue is perhaps the chief reason Joe Biden still leads in national polls, even if in the early states he is an increasingly vulnerable front-runner.

If Sanders is going to close the deal with Democratic voters, he needs to zero in on the electability issue. Fortunately, he has a strong hand to work with on electability.

One concern moderate Democrats have is that Sanders’s long support of left-wing causes might make him vulnerable to opposition research. Former Clinton adviser Peter Daou provides a useful retort. “I spent a good chunk of time in 2016 poring over the #Bernie oppo book,” Daou tweeted. “There is nothing in it that isn’t already in the public sphere. So when people claim there are big surprises … They’re making it up.” A recent CNN poll shows Sanders has the highest net favorability of any Democratic candidate.

Writing in Jacobin, Meagan Day and Matt Karp make a compelling case that Sanders can specifically argue that he’s in the best position to win back the Obama voters who went for Trump in Midwestern swing states, as well as draw out Obama voters who stayed at home and energize nonvoters.

Day and Karp note that “in the 206 counties that went for Obama in 2008 and 2012 and then Trump in 2016, Sanders has out-fundraised all of his competitors—by a long shot. By September 2019, he pulled in 81,841 individual donations from 33,185 donors in these flipped counties. That’s roughly three times as many as Biden, Warren, or Pete Buttigieg.”

More broadly, they contend that “American nonvoters, including nonvoters in the battleground states, are disproportionately young, non-white, and working-class. Bernie is distinctly popular with all of these groups, suggesting that he is by far our best shot to mobilize this vast slumbering army in a general election against Trump.”

This is the argument that Sanders has to press hard on in the last weeks before the Iowa caucus. The early states themselves will be a testing ground for Sanders’s theory of politics. If he can really get nonvoters out for the primary, as his campaign is trying to do, he’ll not only win those states but also have a compelling argument that he’s the best candidate to defeat Trump.