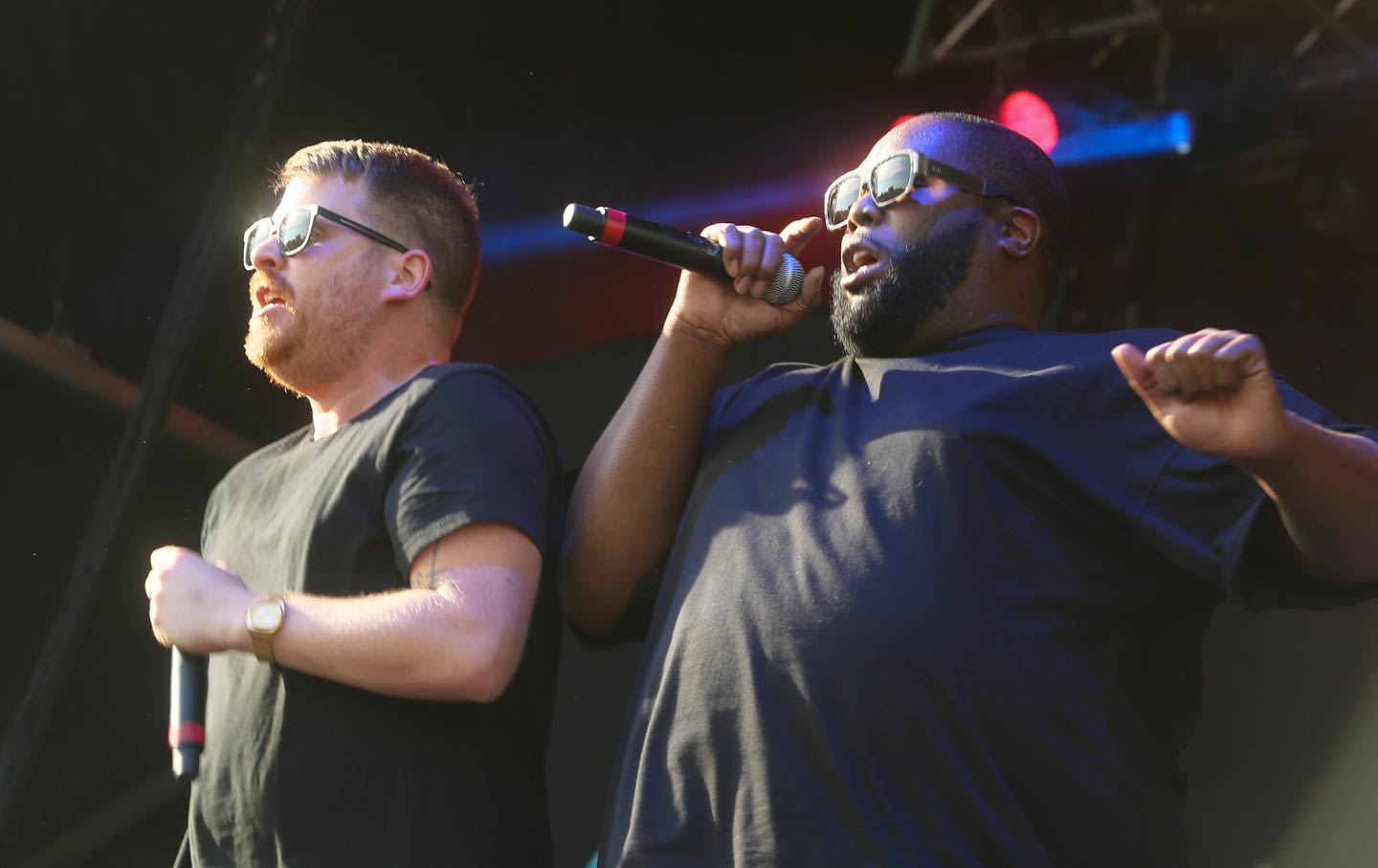 Just five years ago, Killer Mike and El-P seemed to have reached their respective peaks in rap music. Mike had gained traction in the early 2000s, first as a guest lyricist on some of OutKast’s mid-career projects—“Snappin’ & Trappin’” from the Grammy Award–winning album Stankonia (2000) and the 2001 track “The Whole World”—and then as a member of the short-lived Atlanta-based group Purple Ribbon All-Stars (with Southern luminaries like Big Boi and Sleepy Brown). He also enjoyed a nice run as a solo artist with the albums Monster (2003), two editions of I Pledge Allegiance to the Grind (2006 and 2008), and PL3DGE (2011). But the relentlessly energetic rapper still never broke through as a mainstream rap star.1

El-P’s trajectory dates back to the mid-1990s, when, as one-third of the rap group Company Flow, the Brooklyn-born MC/producer became a staple of New York’s alternative-rap scene. The group’s 1997 album, Funcrusher Plus, is a widely heralded gem that recalls hip-hop’s golden era—largely due to El-P’s idiosyncratic break beats, which put an edgier spin on the electro rap-funk hybrid that Afrika Bambaataa pioneered in the 1980s. In 1999, El-P co-founded the indie label Definitive Jux, where he released his solo debut, Fantastic Damage (2002), a set of chaotic, rapid-fire rhymes and spacey instrumentals. He shut down the label in 2010 to focus solely on his own music.2

From afar, it might not seem like the two rappers have much in common. They hail from vastly different rap cultures, each based in its own local context and history. But both knew the other’s music, and after meeting through a mutual friend, El-P flew to Atlanta to work with Mike, who was recording his 2012 album R.A.P. Music. After just three hours in the studio, Mike asked him to produce the entire project.3

El-P’s bombastic tracks brought greater urgency to Mike’s searing indictments of police brutality and the legacy of former president Ronald Reagan; R.A.P. Music turned out to be one of the best hip-hop releases of the year. El-P released his own album, Cancer 4 Cure, just a week after Mike’s project, and it also garnered mass critical acclaim. Both albums signaled an upswing for Mike and El-P, and what had looked like peaks would soon prove just to be temporary plateaus.4

The two officially became a duo in 2013, releasing their first album as Run the Jewels that same year. On the surface, their formula is simple: El-P makes the beats; he and Mike rap aggressively about pretty much anything. Smoking weed and political rebellion are some of their enthusiasms; Christianity, racism, and all manner of American injustices are a few of their bêtes noires. Theirs is a no-frills, no-nonsense approach, which runs the risk of becoming stale with each subsequent release.6

Yet since their inception, Run the Jewels has been a strong voice of irreverence and political dissent. In August 2014, two months before the release of Run the Jewels 2, police officer Darren Wilson shot and killed Michael Brown in Ferguson, Missouri, setting off a series of protests throughout the country. A year prior, a jury had determined that neighborhood-watch coordinator George Zimmerman was not guilty in the shooting death of Trayvon Martin in Sanford, Florida.7

The album, which doesn’t mention either of these events explicitly, gained new meaning from them: Its production and lyrics seethe with vicious intensity. “Where the fuck the warden?” Mike asks on “Close Your Eyes (and Count to Fuck),” a song that calls for prison riots. “And when you find him, we don’t kill ’em, we just waterboard him. / We killin’ ’em for freedom ’cause they tortured us for boredom.”8

Their third album, Run the Jewels 3—which came out on Christmas Eve, three weeks ahead of the release date—is equally unflinching, though the mood of the album doesn’t feel as anxious. El-P and co-­producers Little Shalimar and Wilder Zoby have compiled an edgy, seamless groove that largely fades into the background. Even as they’re addressing social issues, the rappers sound more at ease (as relaxed as Mike and El can sound, in any event).9

Run the Jewels 3 is full of the acerbic, witty banter for which the group has become known. On “Talk to Me,” the album’s first single, El-P asserts: “Brave men didn’t die face down in the Vietnam muck / So I could not style on you.” These lines use history in service of braggadocio—he and Mike have reached the height of their popularity, after all—yet he’s still conscious enough to warn you against the intrusions of the security state: “You think baby Jesus killed Hitler just so I’d whisper? / And you safe and sound, and these crooks tapped your phones to not have a file on you?”10

On “A Report to the Shareholders,” Killer Mike wades into his own controversy. During the 2016 presidential campaign, the rapper was an avid supporter of Bernie Sanders, and after a February campaign stop at Morehouse College (where Mike completed one year of school), several news outlets reported him saying: “A uterus doesn’t qualify you to be president of the United States.” He was actually quoting the LGBTQ activist Jane Elliott, who told him, “Michael, a uterus doesn’t qualify you to be president of the United States. You have to have policies that are reflective of social justice.” But many news outlets misrepresented Mike’s statement, and on the song he responds by rapping: “Ooh, Mike said ‘uterus’ / They actin’ like Mike said ‘You a bitch.’” His verse pivots between self-doubt and perseverance, questioning our collective will to rise against social oppression. It contains what’s easily the most provocative thought on the entire album: “Choose the lesser of the evil people and the devil still gon’ win / It could be all over tomorrow, kill our masters and start again.”11

Lacking the wide-eyed vigor of the first installment and the monumental hype of the second, Run the Jewels 3 is a victory lap for Killer Mike and El-P. But the music here is no less important or weighted. The new album speaks to the same generation of listeners: people coming of age and political consciousness amid police brutality, urban decay, economic inequality, and lawmakers who operate as though they’re unaccountable for it all. With the Trump presidency on the horizon, Mike and El-P do what’s become customary for them: They urge us to get up and fight whatever threatens our political, social, and human dignity.12

Each of Run the Jewels’ albums has been curiously timed, recorded just before the social and political moment that gives it its resonance. Surely, for the group’s third project, more of the same isn’t such a bad thing. But one suspects the coming years just might give Killer Mike and El-P enough of the right raw material for a transformational fourth installment. After all, besting their past has become standard for Run the Jewels.13