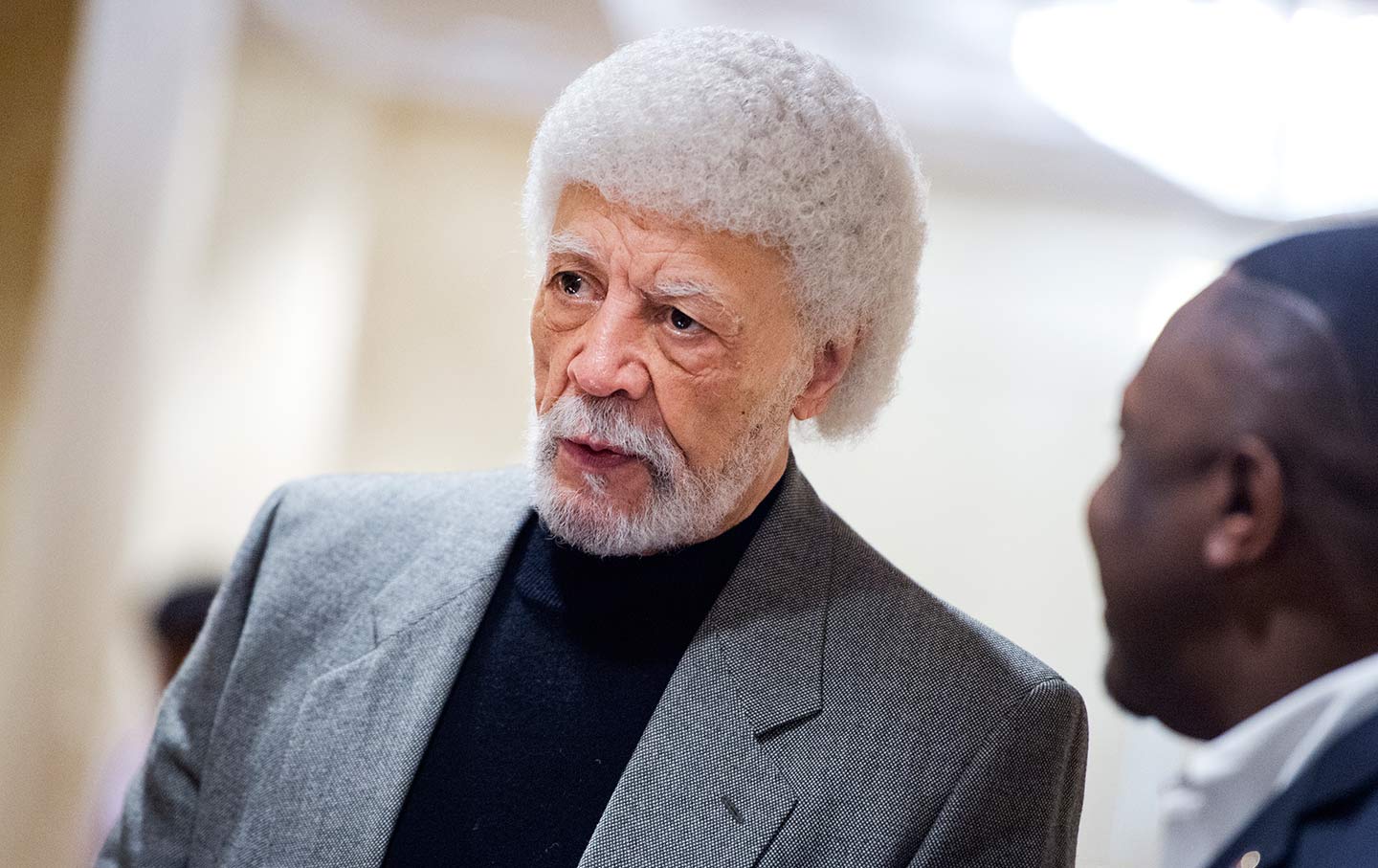 Ron Dellums at the US Conference of Mayors in January 2016. (AP / CQ Roll Call)

When Ron Dellums ran for Congress in 1970, Vice President Spiro Agnew campaigned against him. Richard Nixon’s political hitman decried Dellums as an “out-and-out radical” who would bring the protest politics of the streets to the Capitol. Dellums did not object. Indeed, when he won the election, the new congressman from California told the cheering crowd: “One person I forgot to thank–my public relations agent, Spiro T. Agnew.”

Agnew got a lot of things wrong in those days. But he was right to fret about Ron Dellums.

Within months of his arrival in Washington, Dellums became so enraged with the failure of Congress to confront the horrors of the Vietnam War that he held an unofficial hearing where US Army veterans spoke of war crimes they said had committed against the people of Vietnam. One newspaper declared, “The hearings included some of the most damning statements of American conduct in war ever heard on Capitol Hill.”

The New Left had arrived in the US House of Representatives.

For the better part of three decades (1971–98) as the congressman from a California district that included Oakland and Berkeley, Dellums was the rare member of Congress who could be honestly identified as both an activist and a statesman. After he left Congress, Dellums served four years as mayor of Oakland. Now he has died at age 82, leaving a legacy, in the words of his former aide and successor, Congresswoman Barbara Lee, as “a great warrior and statesman.”

“The contributions that Congressman Dellums made to our East Bay community, the nation, and the world are too innumerable to count,” said Lee. That is certainly true. But, surely, the list includes his battles against illegal and immoral wars, as well as the military-industrial complex that he fought to constrain as a leader of congressional campaigns against the B-2 Spirit stealth bomber program and the MX Missile project.

As Lee is today recognized as the most ardent anti-war activist in Congress, so Dellums was in his day.

“What shaped my politics regarding war and peace was Martin Luther King Jr., the most extraordinary person that I ever heard. And when he began to talk about the issues of war and peace with such eloquence and such passion, I was drawn to that like a magnet,” Dellums recalled.

A popular community activist in the Bay Area who bridged the gap between the Black Panthers and more traditional social-service agencies, Dellums agreed to run for the Berkeley City Council in 1967 only if local Democrats would get out of his way and let him practice politics on his own terms.

“That stipulation became the major tenet of Dellums’s political career,” observed The Oakland Tribune when Dellums announced his retirement plans. Running on a radical anti-war platform in 1970, the Berkeley councilman challenged and defeated a liberal incumbent congressman in the Democratic primary.

Dellums’s victory drew national headlines. It became the symbol of a rising new politics that no longer would compromise on issues of war and peace.

“I took the Vietnam War on very strongly. And a number of people said to me, ‘Well, you know, the black community’s not interested in the Vietnam War.’ My response was that black people in America, historically, carried the burden of racial and economic oppression, but they do not have to carry the burden of ignorance. To be in public life, you have to be part of the educative process, and my job is to go out there and help people understand the connection between waging war and spending billions of dollars on military apparati that detracted from the priorities of this country,” Dellums explained years later in a discussion sponsored by the progressive Center for Defense Information.

Dellums became a national symbol of the anti-war movement, but he had to battle for respect in Congress. He won a place on the House Armed Services Committee, but not a chair–the chairman, a Southern segregationist, forced him to share a seat with someone else.

“They saw me as a caricature,” he recalled. “And they saw Berkeley as ‘Berserkeley,’ so whoever represented that area has to at best be flaky. They saw the Bay Area as this hotbed of left-wing communist thought. Therefore, Ron Dellums, at a bare minimum, had to be a ‘commie pinko extremist.’ So here comes this black guy from the Bay Area talking about peace, feminism, challenging racism, challenging the priorities of the country, and talking about preserving the fragile nature of our ecological system. People looked at me as if I was a freak. And in looking back, I think the only crime that we committed was that we were 20 years ahead of our time.”

Instead of storming out of the committee and struggling on the periphery, however, Dellums stuck it out. “I did not join the Armed Services Committee to learn about missiles, planes, and ships. I joined because I knew I would need to become an expert in this field in order to argue successfully for military-spending reductions that would free up resources for the desperate human needs that I see every day in my community,” said Dellums.

So he became an expert. Even Dellums’s critics came to accept his skill as an analyst of Pentagon budgets. In 1993, he rose to the ranking position on the Armed Services Committee, becoming the first African American and the first anti-war activist ever to serve as its chair.

“At that moment, he became a historic figure in Congress,” said former US senator George McGovern, who talked with me a number of years ago about his great admiration for the California congressman with whom he served for a decade and often made common cause. “To rise to the chairmanship of the Armed Services Committee as a self-described radical from Berkeley is something that most members of Congress in my time would have said was impossible. But Ron did it. If the Democrats had maintained control of the House, who knows what he might have accomplished.”

Dellums was not able during his two-year tenure as chairman to achieve his goals of reorienting federal budget priorities from defense to domestic concerns, converting defense industries to nonmilitary production, or developing a foreign policy that would lead the United States to walk gently in the world.

But Dellums had his successes. He was the prime mover behind efforts to cut back or cap weapons programs–most notably the MX missile and the B-2 bomber. His pioneering work to expose and prevent racial discrimination and sexual harassment in the military had a dramatic impact, as did his work to promote peacekeeping as a legitimate role for the US military.

The alternative budgets that Dellums developed as chair of the Congressional Black Caucus–budgets that proposed massive shifts in spending from military to human needs–became rallying points for progressive activists. “On budget issues, he really has been the voice of the left in Congress,” Alan Charney, of Democratic Socialists of America, observed when Dellums announced he was leaving Congress.

But Dellums went beyond budgets and defense issues. No one fought harder for an ethical US foreign policy. In 1983, Dellums sought a congressional investigation of the Reagan administration’s invasion of Grenada. And when the administration set out to send US aid to the Nicaraguan contras, Dellums filed a lawsuit charging that the move violated the Neutrality Act.

Nowhere was Dellums’s contribution more meaningful than in the fight against apartheid in South Africa. When he came to Congress in 1971, Dellums introduced the first bill proposing sanctions against the African nation’s white racist government. The anti-apartheid movement in the United States was only beginning to develop at the time, but Dellums’s bill began a process that 15 years later would lead to the House vote to enact the measure.

When President Ronald Reagan vetoed the Comprehensive Anti-Apartheid Act of 1986, Dellums and his allies succeeded in getting the Democratic House and a Republican-led Senate to reject the president’s wrongheaded position. For the first time in the 20th century, Congress overrode a presidential foreign-policy veto.

After Nelson Mandela was freed from the prisons of South Africa, he toured the United States in 1990. In Washington, it was Dellums who escorted Mandela onto the floor of the US House.

Mandela’s final stop was in Oakland, where he was greeted by Dellums. The man who would become president of South Africa embraced his comrade and declared to a crowd of almost 60,000, “We are at a crucial historical juncture. We shall not turn back.”

Ever the activist, he warned that the pressure would continue to be needed. “The struggle to end racism, sexism, and homophobia; to provide for a fully accessible society; to ensure that the children are educated, our families housed, our communities safe, and our environment sound; and to secure the post-Cold War peace dividend all remain urgent national priorities,” he said in 1998.

That is still the case today. And that is why the most important legacy that Ron Dellums leaves us is the inspiration to fight on. Congressman Keith Ellison (D-MN) responded to the news of the former congressman’s passing by thanking Dellums for his “relentless faith in our ability to make a better world.”

It is that faith, the faith of Ron Dellums, that we need now more than ever.