As the sun went down in Mexico City last Thursday, thousands of people lined up at the gates of the Los Pinos presidential residence, an enormous leafy complex in the middle of Mexico City’s Chapultepec Park. “Look, it’s the president!” joked a young girl playing in line with her little brother. But with their blankets and thermoses in tow, the crowd wasn’t there to wait for the newly inaugurated Andrés Manuel López Obrador. They were there for a free screening of Alfonso Cuarón’s film Roma.

The film was projected in what was, until a few weeks ago, the presidential heliport. But when Obrador was sworn in on December 1, he broke the tradition of moving into Los Pinos, opting instead to continue living in his home in the Roma neighborhood—where Cuarón’s film is set—with eventual plans to move closer to the National Palace, Mexico’s federal seat.

Making good on one of his man-of-the-people campaign promises, which included foregoing a security detail and continuing to drive his white Jetta, he opened the doors of Los Pinos to the public for the first time in 84 years. His administration’s intention is to transform it into a cultural center that will include regular events like the Roma screening.

Cuaron’s new film is a fitting debut for the newly public center: The film is an intimate portrait of the relationship between an upper-middle-class Mexican family and the indigenous domestic worker, Cleo, who holds their home together. It’s also homage to Cuarón’s own childhood housekeeper. Set in the 1970s, the tensions around class, race, and gender that it exposes feel current still today. These situate the film within the national conversations around systemic inequality that helped Obrador get elected.

“A huge component of urban Mexican society is this class structure that involves internal migration, composed of young females coming from outside the city looking for work,” explained Pablo Martinez Zarate, a filmmaker and professor of documentary film and photography at Iberoamericana University.

The screening reflected the new administration’s stated commitment to accessibility: Roma was financed by Netflix, which originally limited its run in theaters and ignited a backlash against restricting such a cinematographic film to costly streaming services viewed on small, private screens, especially when the limited showings sold out almost immediately.

“There are people who don’t have Netflix, who don’t have the Internet,” said Antonio Martínez Marvel, spokesman for the new secretary of culture, adding that the project Los Pinos Para Todos (Los Pinos for All) aims to shine a light on the way that Mexican presidents have lived apart from the people, metaphorically and physically: “When you go to Los Pinos, you feel like you’re in a bubble.”

In contrast, a collective viewing is a way “to live our culture in community.” And on Thursday night, the 3,000 people eating free popcorn, warming their hands on cups of Christmas punch, and stretching out on woven palm petates in front of a huge screen playing a distinctly Mexican film were a powerful symbol of the reclaiming of a space that has been an emblem of corruption and inequality—one which AMLO has himself called “haunted.”

“It feels really good to be here,” said Alejandra Peréz, a psychologist who came to see Roma with her family. “This is something totally new, and it goes with all of the transformation that the new president promises.”

Just as the opening of Los Pinos is a homecoming for the people of Mexico, Roma represents a homecoming for Cuarón: It is the Mexican director’s first film made in his home country since Y Tu Mamá También in 2001.

“One of the big names in Hollywood comes back, makes a film in Mexico, and deals with a topic that’s not portrayed very much in contemporary Mexican cinema—a local, Latin American narrative that he has been detached from,” explains Martinez Zarate. 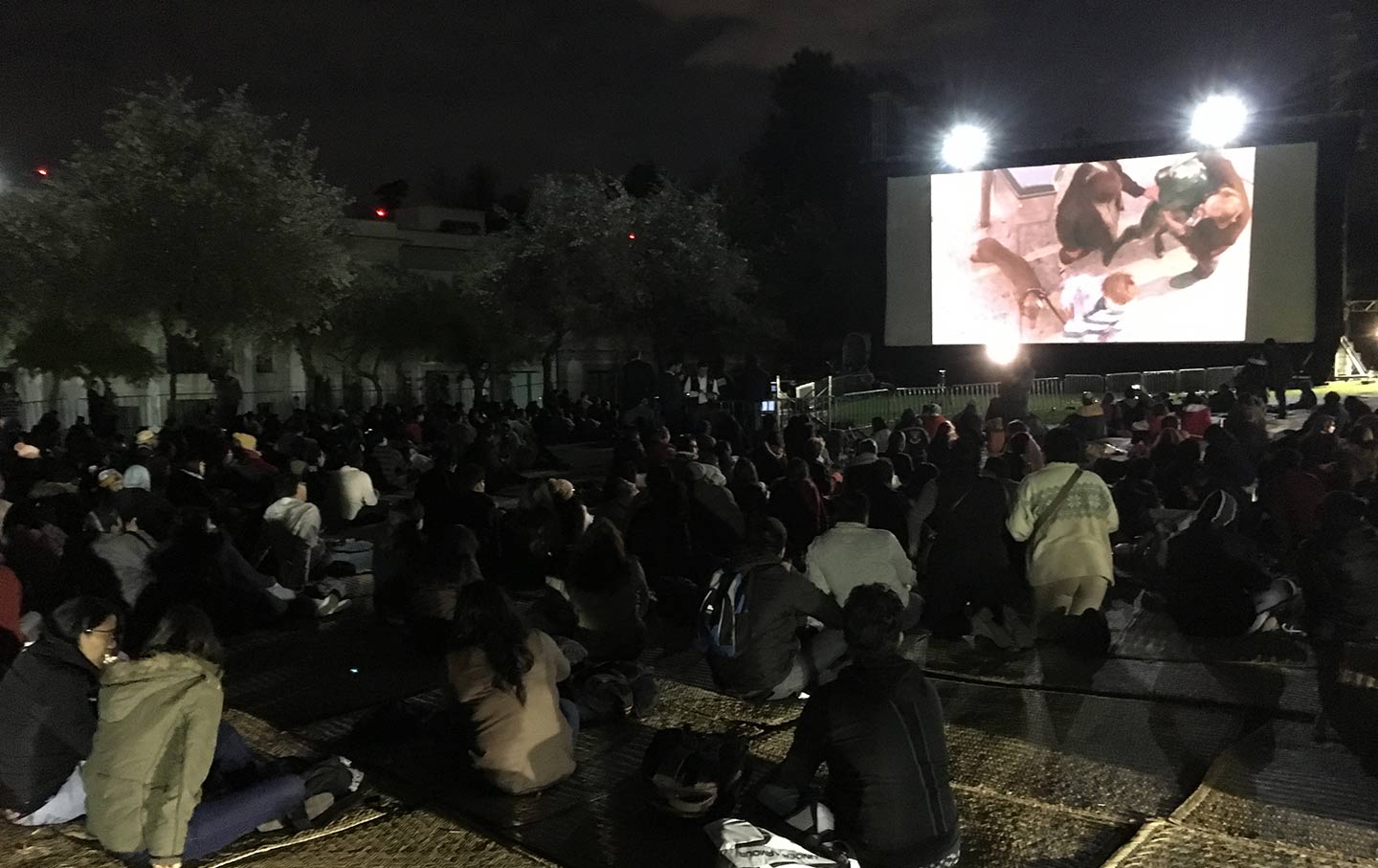 Cuarón shot Roma in dynamic black and white, its deep shadows reflecting the contrast between the story’s sweet family moments and their underlying gravity. This creates a mood of quiet unraveling, which radiates from the family to the political crisis playing out outside the art-deco gates of their home. The film depicts injustice without judgment; the actors, many of them appearing for the first time, humanize their archetypes.

Roma’s story is universal, yet it couldn’t take place anywhere else. It’s soundtracked with the quotidian rhythms of the city, from the garbage collectors’ bell to the Pan-flute trill of the traveling knife-sharpener.

Rubelio Morales, a graphic designer, waited in line outside Los Pinos for more than three hours to see it. “This film represents a big part of the essence of the Mexican people, of chilangos,” he said, using a slang term for Mexico City citizens. “In a moment in which a rift is opening, where a new president just came in, where things are being done in a different way, this event has a double-meaning: a new space for the people and a film that’s breaking down paradigms.”

Activist Marcelina Bautista, founder of the Center for Support and Training of Domestic Workers, gave the opening remarks before the screening on Thursday. “You’re going to see the different Mexicos that we experience today in this country,” she said. “The film talks about women, classism, and racism, and it takes us a step further to reflect on the country that we want and the society that we want.”

Next to her was Yalitza Aparicio, the actress who plays Roma’s protagonist and is of Mixteca origin. AMLO has made the celebration of indigenous culture one of the tenets of his campaign, including the creation of a new institute to support Mexico’s indigenous communities. Though the film is in Spanish, Aparicio’s Cleo sings lullabies to the children she cares for in Mixteca, practically the only way that the family touches the culture of this pivotal figure in their home.

“That was how we lived; it was a different ideology,” said Margarita, one half of a middle-aged couple forging through the crush after Roma’s credits rolled. But whether you see Mexico as a changed society or one on the cusp of change, there’s a value in collective reflection during this moment of political transition.

Pulling away from Los Pinos, a taxi driver named Rigoberto had found out too late to get in line for the screening, which he said that many chilangos viewed as ridiculous anyways. “They thought the government was just trying to trick people with free popcorn and punch,” he said. “But I think it’s really cool.”

And, as soon as he got off his shift as midnight—just as Roma was released on Netflix—he planned to head straight home and watch his city in black and white.

Correction: An earlier version of this article inaccurately described a new institute created by Andrés Manuel López Obrador. Its purpose is to support indigenous communities and cultures, not solely indigenous languages (an institute exclusively devoted to the latter purpose already exists in Mexico). The text has been updated.