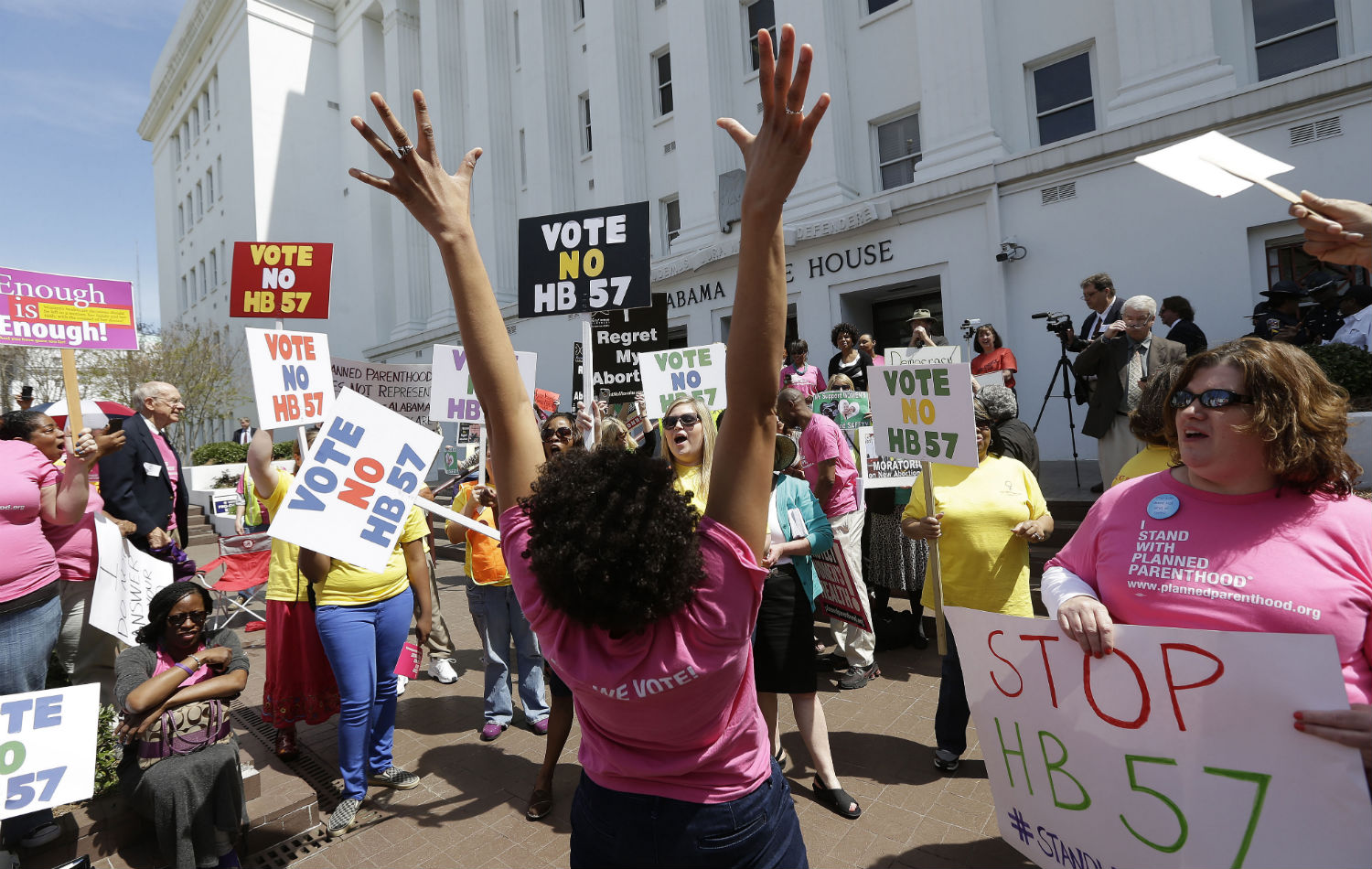 Carol McDonald of Planned Parenthood leads a pro-choice rally in a cheer outside the Alabama Statehouse. (AP Photo/Dave Martin)

Last summer, The New York Times ran a story that claimed the term “pro-choice” had fallen out of favor among abortion rights advocates. Instead, the article explained, because younger people eschew political labels, movement leaders had taken to using different language—talking about “women’s health” beyond just abortion, talking about how “economic security” is impacted by access to reproductive health care—to discuss issues like access to abortion and contraception.

But there was a problem. The movement leaders and elected officials the reporter spoke to were all white women. In a story that posited that millennials—the most racially diverse generation the United States has seen—were upending how we talk about abortion, there was no analysis of whether race may play a role in changing political tastes. There was no mention, for example, of messaging black women developed to combat race-baiting, anti-choice billboards that cropped up nationwide a few years back, or of how young women of color in Albuquerque had successfully convinced voters to reject a proposed twenty-week abortion ban. These oversights amplified an idea that has long plagued the abortion rights movement—that the contributions and leadership of women of color are ignored or co-opted—and kicked off a vibrant conversation within the movement about whose work gets attention and why. The episode got some reproductive justice organizations—groups that could have offered the race and class analysis the Times article lacked—thinking about how to avoid being left out of the story next time. Part of the problem, they figured, was that the reporter had relied on a homogenous list of sources they just weren’t on.

So a group of reproductive justice organizations, including Forward Together, National Latina Institute for Reproductive Health and Illinois Caucus for Adolescent Health, set to work on a guide for media reporting on abortion—released recently in advance of today’s forty-second anniversary of the Roe v. Wade ruling—that they hope will have ripple effects. If journalists start to understand what the reproductive justice movement is fighting for and why, then the public’s understanding of what’s truly at stake and who’s offering solutions will start to shift as well.

Kalpana Krishnamurthy, the primary researcher on the guide and policy director at Forward Together, said it’s a way for the movement to get out ahead of stories, so the groups she works with can get out of the habit of doing damage control after an incomplete or inaccurate story—any that relies on traditional experts to the exclusion of people disproportionately impacted by policies, for example—comes out. “This is a proactive way to say to media, ‘there’s a story here and we think you can do an amazing job of covering it and we’ve got some tips and tricks for you,’” she said.

It’s the kind of work GLAAD has been doing for years, producing its own style guide that’s helped eliminate phrases like “homosexual lifestyle” and other off-key or defamatory language from mainstream news reports. Some suggestions in the guide are easy to imagine using and it’s clear that their purpose is to neutralize the political charge some language carries. For example, writing that the Hyde Amendment “denies Medicaid coverage of abortion” rather than that it bans “taxpayer funding of abortion.” Other suggestions come off as clunky. I may find it concise to write that today marks the forty-second anniversary of the Supreme Court ruling that legalized abortion. But according to the guide, that’s not exactly right. Instead, I should note that Roe v. Wade “granted the right to legal abortion before viability, though Congress and state legislators have been allowed to restrict access to the procedure, disproportionately affecting people of color or those who are living in rural areas.”

That’s a mouthful, and I may have lost you somewhere around “viability,” but according to the authors, the specifics are critical. By wrapping who’s left out or disproportionately affected into the very definition of a word or idea we take for granted, we change the story entirely. And changing old narratives around abortion by adding dimensions of race, class, geography, sexual orientation is at the core of the reproductive justice movement’s work. This isn’t just nitpicking or overcomplicating, the guide’s authors argue, it’s about accuracy and telling the whole truth.

Sure, I and other journalists may bristle at the idea of advocates telling us how to do our jobs. But the truth is, language matters and the words we choose are often a reflection of our own biases, experiences, what we hear from the people we surround ourselves with, whether we’re reporters or outside the media. On the night of the midterm elections, writers Imani Gandy and Andrea Grimes called out reporting that claimed Wendy Davis’s opponent in Texas’ gubernatorial race had carried “women,” when upon closer examination it was clear that black and Latina women had voted overwhelmingly for Davis. This is the kind of framing that lacks nuance and, as a result, is just wrong. Hopefully this guide and the reproductive justice movement’s broader effort to declare its place at the table helps more people get it right.