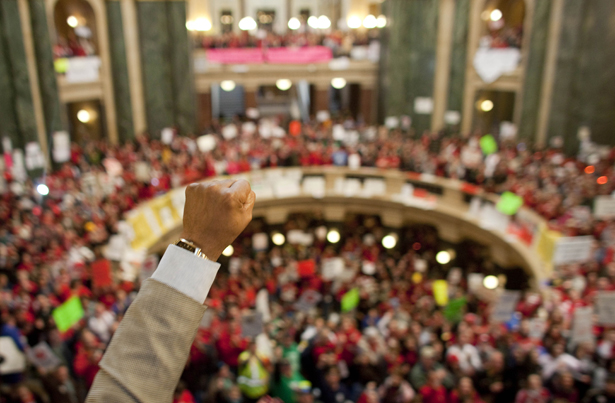 Protesters in Wisconsin, 2011, where communities are voting to amend the constitution. (Darren Hauck/Reuters)

Even as the US Supreme Court attempts to expand the scope and reach of the already dangerous dominance of our politics by billionaires and their willing servants, Americans are voting in overwhelming numbers against the new politics of dollarocracy.

The headline of the week with regard to the campaign-finance debate comes from Washington, where a 5-4 court majority has—with its McCutcheon v. Federal Election Commission decision—freed elite donors such as the politically-ambitious Koch Brothers to steer dramatically more money into the accounts of favored candidates, parties and political action committees. The decision makes it clear that the high court's activist majority will stop at nothing in their drive to renew the old Tory principle that those with wealth ought to decide the direction of federal, state and local government.

But the five errand boys for the oligarchs who make up that majority are more thoroughly at odds with the sentiments of the American people than at any time in the modern history of this country's judiciary.

We know this because the people are having their say with regard to the question of whether money is speech, whether corporations have the same rights as human beings and whether billionaires should be able to buy elections.

In every part of the country, in every sort of political jurisdiction, citizens are casting ballots for referendum proposals supporting a Constitutional amendment to overturn US Supreme Court rulings that have tipped the balance toward big money.

In so doing, these citizens are taking the essential first step in restoring democracy.

On Tuesday, thirteen Wisconsin communities, urban and rural, liberal and conservative, Democratic-leaning and Republican-leaning answered the call of constitutional reform. Even as groups associated with billionaire donors Charles and David Koch were meddling in local elections in the state, voters were demanding, by overwhelming margins, that the right to organize fair and open elections be restored.

It even happened in Wisconsin Governor Scott Walker’s hometown of Delavan, where voters faced the question:

Shall the City of Delavan adopt the following resolution:

RESOLVED, the City of Delavan, Wisconsin, calls for reclaiming democracy from the corrupting effects of undue corporate influence by amending the United States Constitution to establish that:

1. Only human beings, not corporations, unions, nonprofit organizations nor similar associations are entitled to constitutional rights, and

2. Money is not speech, and therefore regulating political contributions and spending is not equivalent to limiting political speech.

BE IT FURTHER RESOLVED, that we hereby instruct our state and federal representatives to enact resolutions and legislation to advance this effort.

76 percent of the Delavan residents who went to the polls voted “Yes!”

They were not alone. A dozen other Wisconsin communities faced referendums on the same day. Every town, village and city that was offered a choice voted to call on state and federal officials to move to amend the US Constitution so that citizens will again be able to organize elections in which votes matter more than dollars.

The Wisconsin votes provided the latest indication of a remarkable upsurge in support for bold action to renew the promise of American democracy. Since the Supreme Court began dismantling the last barriers to elite dominance of American politics, with its 2010 Citizens United decision, sixteen states and more than 500 communities have formally requested that federal officials begin the process of amending the constitution so that the court's wrongheaded rulings can be reversed.

Last fall, John Bonifaz, the co-founder and executive director of the reform group Free Speech For People, calculated that “In just three years since the Supreme Court’s Citizens United ruling, we have come one third of the way to amending the US Constitution to reclaim our democracy and to ensure that people, not corporations, shall govern in America."

Since the start of 2014, however, the movement has seen a dramatic acceleration in the grassroots pressure for action. During the first weeks of March, forty-seven town meetings called for a constitutional amendment—in a move that put renewed pressure on the New Hampshire legislature to act on the issue.

It is the experience of big-money politics that has inspired renewed activism for reform.

Wisconsin has had more experience than most states with the warping of democracy by out-of-state billionaires, "independent" expenditures and SuperPAC interventions. Governor Walker’s campaigns have reaped funds from top conservative donors, including the Koch Brothers. And a Koch Brothers-funded group, Americans for Prosperity waded into contests this spring for the local board of supervisors in northern Iron County, where mining and environmental issues are at stake; and in the city of Kenosha, where school board elections revolved around questions of whether to bargain fairly with unions representing teachers. In other parts of the state, business interests poured money into school board contests and local races Tuesday, providing a glimpse of the role corporate cash is likely to play in local, state and national elections in the months and years to come.

The Koch Brothers had mixed success Tuesday. Three Iron County Board candidates who were attacked by Americans for Prosperity mailings and on-the-ground "field" efforts in the county won their elections—beating incumbents who were promoted by the outside group. But in Kenosha, two school board contenders who were seen as anti-union zealots won.

There were, however, no mixed results when voters were given a clear choice between dollarocracy and democracy.

The signal from Wisconsin is that grassroots politics can and does still win.

In fact, it wins big.

Encouraged by groups such as United Wisconsin and Move to Amend, activists went door to door in the depths of winter to place amendment questions on local ballots in towns, villages and cities across the state. Many of the communities were in heavily Republican regions of Wisconsin. Yet, the pattern of support was strikingly consistent; in no community did an amendment proposal win less than 60 percent of the vote, and in several the support was over 85 percent.

“Citizens United opened the floodgates to unlimited corporate spending in our elections. Now, Wisconsin voters are standing up to the corrupting influence the flood of special interest money has had on our elections and in our state and national capitols where laws are made,” says Lisa Subeck, the director of United Wisconsin. “Tuesday’s victories send a clear message to our elected officials in Madison and in Washington that we demand action to overturn Citizens United and restore our democracy.”

Whether all those elected representatives will get the message remains to be seen. Several of the communities that voted Tuesday are in the district of Congressman Mark Pocan, D-Madison, who has already introduced an amendment proposal and has been an ardent backer of reform. But many other communities are represented by recipients of the big-money largesse of Wall Street traders, hedge-fund managers, casino moguls and billionaires looking to cover their bets.

Communities in the home district of House Budget Committee chairman Paul Ryan, R-Wisconsin, voted by margins as high as three to one to support an amendment strategy. The results were similar in conservative Waukesha County, which has historically been a Republican stronghold; in the city of Waukesha, for instance, 69 percent of the electorate called for action to amend the constitution. In Wauwatosa, the Milwaukee suburb where Governor Walker now maintains his voting residence, the vote for an amendment was 64 percent.

Wisconsin has several legislative proposals to put the state on record in support of a constitutional amendment. But they face uphill climbs in the current Republican-controlled legislature. And Walker shows no enthusiasm for reforming the system that has so richly rewarded his campaigns. Yet, grassroots activists like Ellen Holly, who helped organize the amendment vote in Walworth County—the heart of Paul Ryan's district and Walker's old home turf—is not blinking. She says it's essential for the Move to Amend campaign to take the fight into even the most conservative areas and to deliver messages to politicians like Ryan.

The widespread support for overturning Citizens United, especially from rural and Republican-leaning areas offers a reminder that the reform impulse is bipartisan and widespread. The same goes from the broad coalitions that have developed. Among the loudest voices on behalf of the referendum campaign in rural Wisconsin was the Wisconsin Farmers Union, which hailed Tuesday’s voting as “a clear message that we the people are ready to take back our democracy."

“Citizens United has allowed big money to drown out the voices of ordinary people and created an environment where, too often, our elected officials are sold to the highest bidder,” says Subeck, a Madison city council member who this year is running for the legislature on a promise to focus on campaign-finance issues. “To fully restore public trust in our democracy, we must return control of our elections to the people through common sense campaign finance reform, starting with the reversal of Citizens United.”