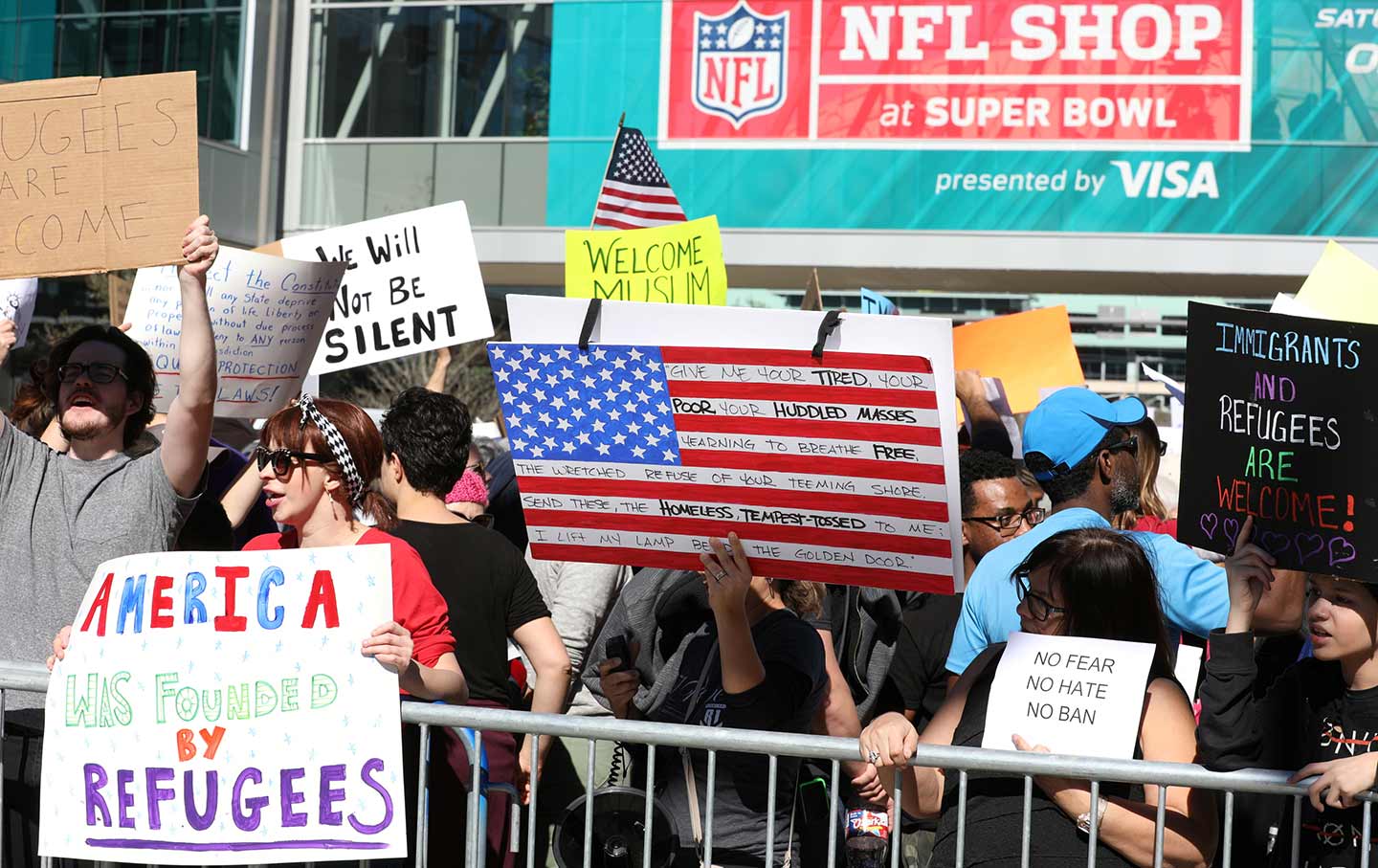 The New England Patriots and the Atlanta Falcons are heading to Houston this Sunday for Super Bowl LI, which is shaping up to be a remarkable collision of politics and play.

Over the last week Houston has been transformed by protests against Trump. In addition to its barbecue and the Space Center, Houston is known globally for being a sanctuary for refugees from all over the world. No city in the United States is more welcoming, more open, and more willing to take in those fleeing war and famine. This is a city that earns its nickname, “The Big Heart,” every day. As the Houston Chronicle wrote, “Harris County alone welcomes about 30 of every 1,000 refugees that the UN resettles anywhere in the world—more than any other American city, and more than most other nations. If Houston were a country, it would rank fourth in the world for refugee resettlement.”

This explains why the protests against Trump’s #NoMuslimBan have been so fierce in H-Town, with hundreds of people packing George Bush Intercontinental Airport last Sunday. So many came to Terminal E to demonstrate that police had to shut the doors to non–ticket holders, who chanted and rallied outside. Earlier that day at Discovery Green, site of the nine-day Super Bowl Festival in downtown Houston, more than 1,000 people turned out to protest. “I don’t think I’ve ever seen the city as galvanized as this,” Houston resident Bev Caplan said to the Chronicle. This city of immigrants—20 percent of Houston was born outside the United States—will use the Super Bowl spotlight to stand up to Trump, with protests set to continue throughout the weekend.

The Nation spoke with Houston Stands With Standing Rock organizer Carlos Martinez who said, “We have two main events. On Saturday is our Houston Stands vs. Trump March from Houston City Hall to NFL Experience at Discovery Green and Sunday we will be at the gates making our presence felt and heard while we fly a banner in the air over the city and stadium…. We are here to stop Trumpism and show that Houston stands with Standing Rock, immigrants, women, black lives, Mexicans, Muslims, and the planet during Super Bowl LI.”

The city is also galvanized by the fact that a 16-year-old who attends Katy High School, just 30 minutes from Houston, has been detained all week, upon returning home from visiting his family in Jordan. Mohammad Abu Khadra was sent from Houston’s airport to a detention center in Chicago, with no access to his cell phone. His brother Rami said, “He was very afraid. Before I saw him, he was on a flight for 15 or 16 hours, then was at the airport for 72 hours. He was very tired and frustrated. When he took the flight to Chicago, he called me, but he doesn’t know anything. He doesn’t know what’s going on.”

While the city of Houston attempts to protect their own, the Super Bowl includes a New England Patriots team whose owner, Bob Kraft, head coach Bill Belichick, and quarterback Tom Brady all have close ties to Trump. Brady, who is coy about his friendship with Trump—while Trump brags about it constantly—was asked on Super Bowl Media Day about “all that was happening in the world.” He replied, “I haven’t paid much attention to what’s going on. I’m just a positive person. I just want the best for everybody.”

Not everyone on the Patriots is so sanguine about Trump. Tight End Martellus Bennett, one of the NFL players raising their fists during the national anthem this year, was asked if he would visit the White House if the Patriots won, and responded, “Most likely not, because I don’t support the person in it.” Bennett has also tweeted against the Muslim ban. A Patriots White House visit might end up just being Kraft, Belichick, Brady, and Trump playing a foursome of croquet on the White House lawn, just being positive people together.

Then there’s the Atlanta Falcons. In addition to fielding one of the most prominent Muslim athletes in the NFL—wide receiver Mohamed Sanu—they are a team whose victory parade would pass through the district of Congressman John Lewis, whose district was maligned by Trump in an unhinged tweet storm after the civil-rights veteran said that he believed Trump’s presidency to be “illegitimate.” Trump tweeted, “Congressman John Lewis should spend more time on fixing and helping his district, which is in horrible shape and falling apart (not to mention crime infested) rather than falsely complaining about the election results.” None of these descriptions of Lewis’s district are accurate, but Trump must have put “black Congressman” and “Atlanta” together in his brain and came up with “crime infested” because, well, he’s Donald Trump.

Lastly, this Super Bowl will feature a halftime show with the never shy, often controversial Lady Gaga. There are already prop bets in Vegas of how political Gaga is going to get. Entertainment Weekly quoted “an insider” who said Gaga is “not even interested” in commenting on President Trump during her performance. If Gaga is silent, that would be more surprising than a Falcons blowout victory. One wonders if this “insider” is named Sean Spicer.

Whether or not Atlanta wins—and the odds are certainly stacked against them—this will be a Super Bowl with political action outside the stadium and political symbolism all over the field. But all around the Super Bowl “green zone” of security, there will be the city of Houston: H-Town, Clutch City, The Big Heart. This is a city that will fight to make sure we remember those who just because of their religion or country of origin, find themselves in a detention center, with no access to an attorney, let alone the big game.

Thank you to Navin Kumar and The Nation’s Brandon Jordan for their assistance with this piece.