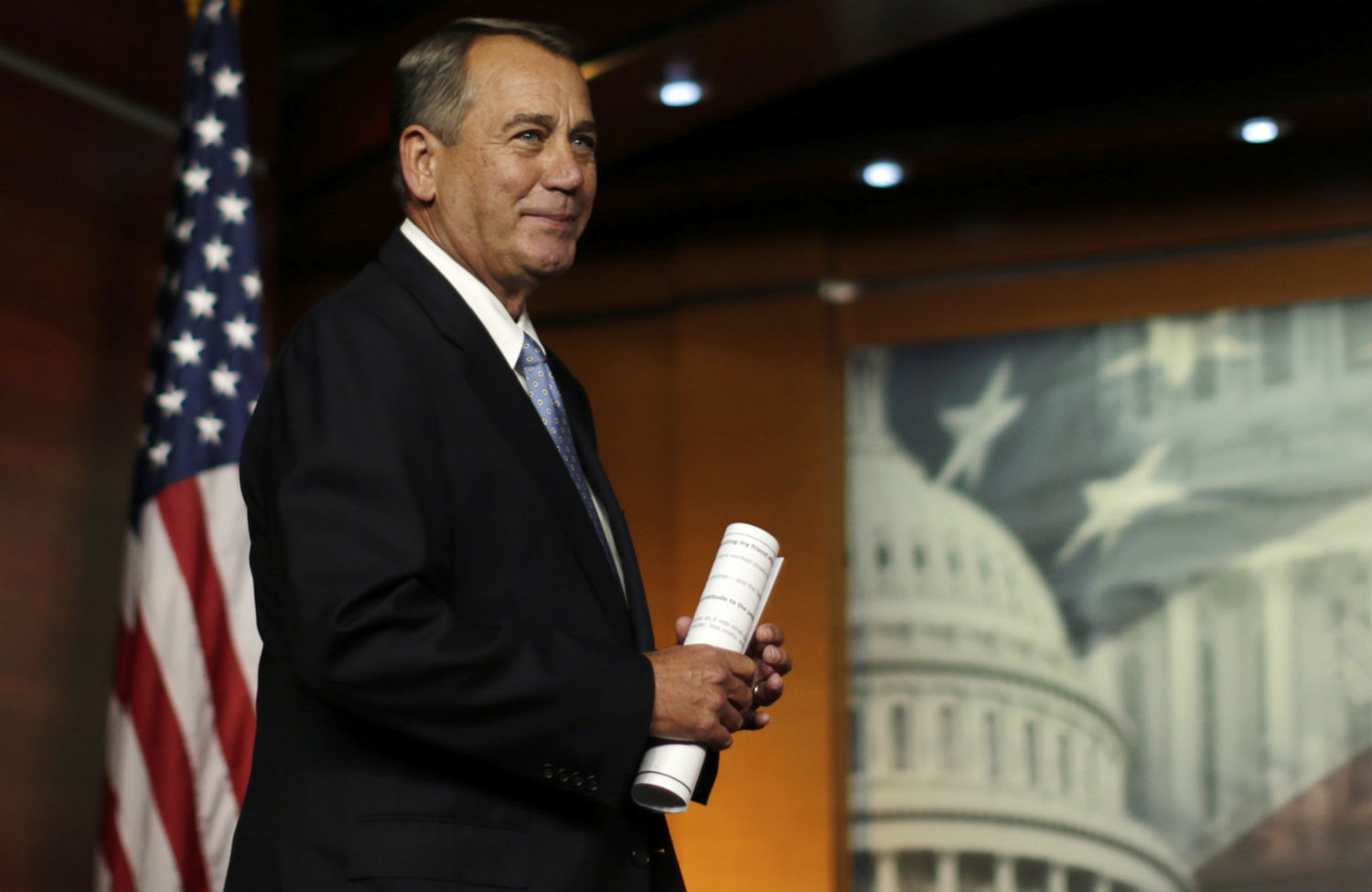 John Boehner arrives for his first news conference after the US mid-term elections, in Washington November 6, 2014. (Reuters/Gary Cameron)

As the final Election Day votes are being counted, national attention has focused on the Republicans’ near-sweep of close elections for Senate and governor. But elections for the other congressional branch deserve more scrutiny. Given that Republicans will only win about 52 percent of votes in House races, how are they ending up with 57 percent of seats? Why did Democrats concede control of the House months ago, even when congressional approval is so low?

The reason is bracing to believers in accountable and representative government. The House is shockingly skewed toward the Republican Party. It’s always hard to oust incumbents—some 96 percent just won re-election—but now it extends to control of the chamber. In 2012, Republicans won a lopsided majority of seats despite securing only 48 percent of the vote, about the same vote share as Democrats this year. To keep the House in 2014, Republican needed only 45 percent of votes. Putting it another way: control of the House comes from winning 218 races or more. The 218th biggest Republican margin was fully 14 percentage points.

Looking forward, it’s even worse for Democrats. FairVote’s Monopoly Politics projection model was, as usual, highly accurate in this election—of 368 projections made a year ago, only two were wrong. We’ve already released our projections for 2016—that’s two years away, folks—and picked sure winners in 373 districts, leaving only 14 percent of the House even potentially in play. To win a majority of 218 House seats, we project that Democratic candidates would need to win ten million more votes than Republicans.

Imagine if analysts assumed that structural bias in the Electoral College would allow the Democrats to keep the White House in 2016 even if their candidate lost by 10 million votes. That distortion would stir an uproar—remember that when Al Gore lost in 2000, he had won the popular vote by 500,000 votes. Yet the partisan skew in House elections draws barely a yawn.

There’s every reason to care. Our founders designed the House to reflect the people, yet its leaders today are electorally unaccountable to voters in November. All Republican House leaders and committee chairs represent safely Republican districts won by Mitt Romney in 2012, and now an absolute majority of House seats will be held by Republicans in Romney-won districts. With little to fear from general election voters, Republicans representing such districts are incentivized to play to their party’s base to fend off primary challengers. The 113th Congress was one of the least productive in history, and it’s hard to see the 114th Congress being much better.

Gerrymandering Is Only Part of the Story

Those who notice the partisan skew usually misrepresent its origins by placing the blame either on gerrymandering or campaign spending. Yes, gerrymandering is wrong, and Republicans leaders in swing states like Florida, Michigan, North Carolina, Ohio, and Pennsylvania drew brutally unfair congressional maps—ones where Republicans packed Democrats into relatively few districts and won most of the rest. But the skew’s origins run deeper. It’s a combination of a changing electorate and increasingly politically polarized voting.

Over the past twenty-five years, Democratic gains in the electorate have come from increases in the number of voters who are people of color and single women, but Democrats have lost support among white voters overall. The result is a startling urban/rural divide, with the Democratic base increasingly concentrated in cities—as evidenced by the fact Jimmy Carter in 1976 won 1,711 counties, nearly three times the 693 counties won by Obama in his comparably close win in 2012. This inefficient distribution of Democratic votes explains why even impartial redistricting will strongly favor Republicans. Indeed, the district skew was already in place by 1996, when Bill Clinton ran behind his national share of the popular vote in 55 percent of districts despite Democrats having drawn most of them—exactly the same share of districts where Obama trailed his national average in 2012.

In 2006 and 2008, Democrats won the House, but only by winning in dozens of Republican-leaning districts. That route to retaking the House has become much harder. Fewer voters now split their tickets between Republicans and Democrats. In 2012, Democrats failed to take over a seat in Romney’s best 201 districts, and after 2014, Democrats represent only five of the 226 districts carried by Romney.

Politically polarized voting largely explains the Senate and House election outcomes this year, but it next extends down to state legislature. Of the hundreds of legislative districts in Georgia, North Carolina and Texas, fewer than ten have a representative from a party whose presidential nominee didn’t win that district’s vote. In this partisan reality, any House district where one party has an underlying advantage of just 53 percent to 47 percent is essentially safe for an incumbent absent personal scandal or a national partisan wave.

Winning fair representation for the House is not a pipedream. More than a quarter of House seats before 1842 were elected in multi-winner districts, most state legislators were elected in multi-winner districts as recently as the 1950s, and most local officials today represent multi-winner districts. We don’t support the winner-take-all rules that were used in these multi-winner races, but Illinois showcased how fair representation voting works when it elected its house of representatives with a cumulative voting system in three-winner district until 1980, when a misguided ballot initiative shrunk the size of the legislature and installed winner-take-all elections. Former state Treasurer Judy Baar Topinka captured what most old-timers in Illinois say when writing, a decade ago, “Cumulative voting provided proportional representation, a fairer way for the public to participate. It could accommodate more women, ethnic and minority legislators, independents and yes, even ‘characters’ who march to different drummers and dare to push the envelope with new ideas and visions for Illinois.”

Eliminating winner-take-all only takes a congressional statute. Our proposed legislation requires states to adopt fair representation voting methods in larger, multi-winner elections. As detailed in FairVote’s interactive map at FairVoting.US, just over a quarter of voters would then have the power to elect a representative in a three-winner district, and 17 percent of voters would do so in a five-winner district. One example of a fair representation method would be ranked choice voting, as used today in Minneapolis and Cambridge, Massachusetts, and by every voter in Australia, Ireland, New Zealand and Scotland. Voters rank candidate in order of choice, with backup choices counting in the event their first choice loses, and nearly all voters ending up electing a preferred candidate. The result would be that voters would almost always be able to vote for candidates they truly believe in and end up with representatives who fairly reflecting each district’s left, center and right—Republicans would win in Manhattan, Democrats in Oklahoma and so on.

As an example, Louisiana would replace its six single-winner districts that are now locked down for five Republicans and one Democrat with two competitive multi-winner districts each with three seats. African-Americans in both districts would have the power to elect representatives, as would conservative Republicans. Each district’s third seat would be in play, with the winner better representing the more moderate voters who are nearly shut out of House elections in the South today.

By expanding the number of voters able to elect preferred candidates, our FairVoting.us plan completely eliminates today’s partisan skew—winning 51 percent of the vote nationwide would mean earning the most seats. Democrats and Republicans would likely be elected to represent voters everywhere in the nation. That would mean every district would be meaningfully contested and both parties would better represent their “big tent” of supporters even as independents and minor parties could hold the major parties more accountable. Women and racial minorities would among the beneficiaries, making them important allies in our drive for reform.

Can we win fair representation? Republicans may not take the lead, as they would lose their unfair advantage in House elections, but many Republicans want to be able to compete in areas with Democratic majorities and better adapt to our changing electorate in order to win the White House. Democrats that have the most to gain, of course, and many congressional Democrats already back legislation to take on gerrymandering with independent redistricting commissions. But that in itself won’t end the partisan skew nor do much for women, racial minorities and stranded Democrats in Republican turf. It’s time to think bigger, support fair representation, and rally behind the goal of achieving truly free and fair elections for Congress.

Rob Richie is executive director of FairVote, a nonpartisan organization.