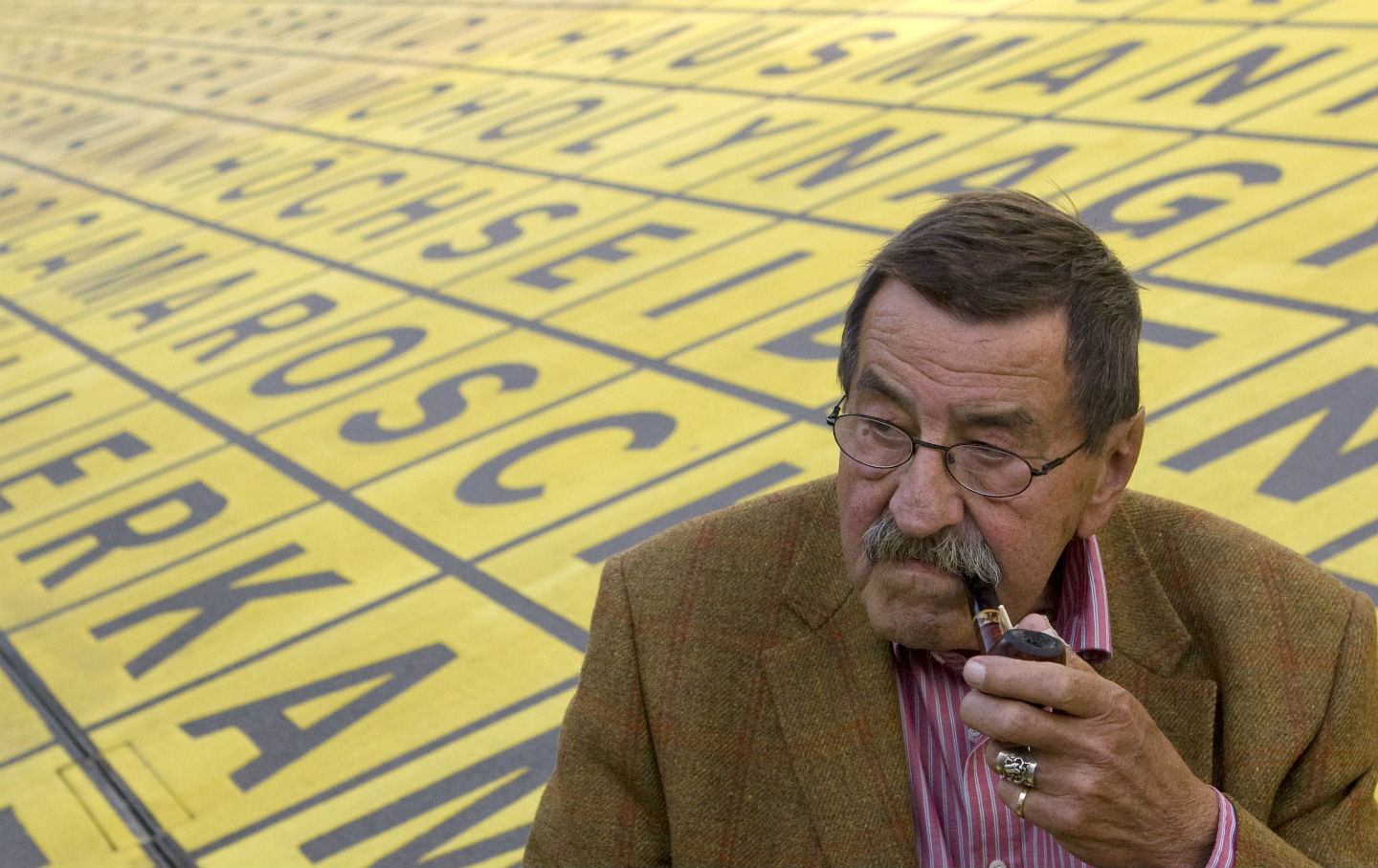 Günter Grass smokes a pipe before a TV interview after a campaign event for the Social Democratic Party (SPD) in Berlin. (Reuters/Thomas Peter)

Every commentary I have read about Günter Grass’s death recognizes his greatness as a writer and then, almost immediately, reminds readers of his youthful affiliation with the Waffen SS and how he remained silent about it for decades while setting himself up as the moral conscience of his country, not to mention of the world.

Have we really understood the relationship between the magnificent talent of the novelist and his ethical failings?

My first fury-filled encounter with Grass may help to illuminate, though perhaps not ultimately answer, that question.

It was in March of 1975, and my wife Angélica and I had come to visit him in his home near Hamburg, an ample rural house bordering a river whose waters were far more placid than our tormentous get-together.

At first, everything went smashingly well. We had been brought there by our friend Freimut Duve, an eminent editor, human rights defender and social democratic parliamentarian for that district. While Grass cooked a succulent fish soup—I had already heard about his legendary culinary skills—we chatted in English about his work and the colossal influence his Danzig Trilogy had played in my own fiction. Slowly, I slipped into the conversation the main motive, less literary, that had led me to seek this meeting. I was hoping to persuade Grass to add his signature to a campaign in defense of Chilean culture and against the dictatorship of Gen. Augusto Pinochet, a crusade already enthusiastically endorsed by his fellow German Heinrich Böll and other notables, such as Gabriel García Márquez and Julio Cortázar. Given Günter’s left-wing politics, I did not suppose this would be a difficult task.

Nevertheless, when I finished my exposition, he was uncharacteristically quiet for a long while. Then he covered the pot, leaving only some embers in the log stove so that the bouillabaisse could simmer with all the leisureliness it deserved and went off, without another word, to inspect some exquisite engravings that he had been carving that morning.

When he finally lifted his eyes to meet mine,I noted a strange rage shining in them. And then he said, “Why didn’t the Chilean socialist comrades attend the recent conference in defense of the Czech patriots this summer in France?”

I explained that, no matter how much sympathy many Chilean democrats felt for the Prague Spring and the struggle of the Czech dissidents, it was politically unviable to exhibit such a predilection in public. It would have meant breaking with the Chilean Communists, who were at that moment a vital part (indeed, one might venture the backbone) of the resistance to the dictatorship, just as they had been loyal and crucial allies of the government of Salvador Allende, overthrown in the 1973 coup. Allende, I added, had condemned the Soviet invasion of Czechoslovakia.

My clarification did not mollify Günter Grass. For him, the Soviet intervention in that country was born of the same imperial impulse that animated the Americans in Chile, and it was essential to denounce both these superpowers simultaneously and, joining in the defense of democratic socialism, seek alternative economic and social models. And when I responded that in order to rid ourselves of Pinochet, we could not jeopardize the indispensable support that the Soviet Union and its allies were contributing, the author of The Tin Drum refused to speak one more word to me. Luckily, he had been enchanted by the presence of my wondrous wife, and he spent the rest of our visits amicably talking with her. I later remarked to our friend Freimut that, if not for Angélica’s magic and charm, Grass would probably have expelled me from his home or set his dog on me. He did, at the very end of our visit, offer me some parting words: “When something is morally correct,” he said, “we must defend it without concern for the political or personal consequences we will pay.”

Forty years later, those words haunt me. It would be easy to return them to his dead body, to ask the man who had demanded rectitude from me what right did he have to try and teach anyone the value of honesty when he was, at that very moment, hiding his own Nazi past. Indict him, as so many seem to be doing today, as they commemorate and puzzle about the Nobel Prize winner who has just died.

Let me, then, defend Günter Grass. I don’t believe that the fact that he concealed his participation in Hitler’s SS invalidates his moral or political judgments. He was right about the amnesia that was corroding Germany in the 1970s. He was right in his defense of Third World liberation movements. He was right that it was necessary to remember the German victims of carpet bombings by the allies during the Second World War. And he was right in the particular case that led to our first meeting having such an unfortunate outcome. I told him so when we met again a few years later at The Hague to read together at a literary conference and I reiterated this to him on several other occasions over the years: the Chilean socialists should have embraced, as I soon did, the cause of the dissidents in the Communist countries. We should have done so with courage and integrity, and as a writer, I had the additional obligation of taking a stand for freedom of expression wherever it was under attack.

Grass was right and yet, all these years later, there is a question, an enigmatic one, that keeps surfacing: Why such a furious response to what was, after all, a legitimate difference of opinion? Why not be tolerant of someone who was, after all, a companion on the road to a better world? Did not the rigidity of his categorical views contradict the splendid ambiguity of his characters, the promiscuous richness of his prose?

He is not here to answer me. And yet, is it not possible that it was precisely that young Nazi, that guilty adolescent alter ego of his, who was requiring Günter’s adult incarnation to never again permit a position that would not be transparent, definitive, ethically uncompromising? Would that not explain his rage, his effervescence, his certainty? Was that not a sign of atonement?

Even so, we must be careful. If we can learn anything from the literary work of such a giant, it is that we are complex and paradoxical and often indecipherable human beings. It would not be fair, perhaps, to end up reducing the whole work of such a magnificently multiple writer to the messages that undoubtedly were being whispered to him all through his existence by that younger Grass who has also died with the older man in the darkness, died along with him. I think that, even at the end, Günter Grass must have been unable to forgive that dim, malignant zone of his past.

All I can do now is lament that I never talked this over at length with Grass then, or later when we became closer. I can only celebrate that our encounter by that quiet river sheds some light on the life and work of a writer I will never cease to read and have never ceased to admire.