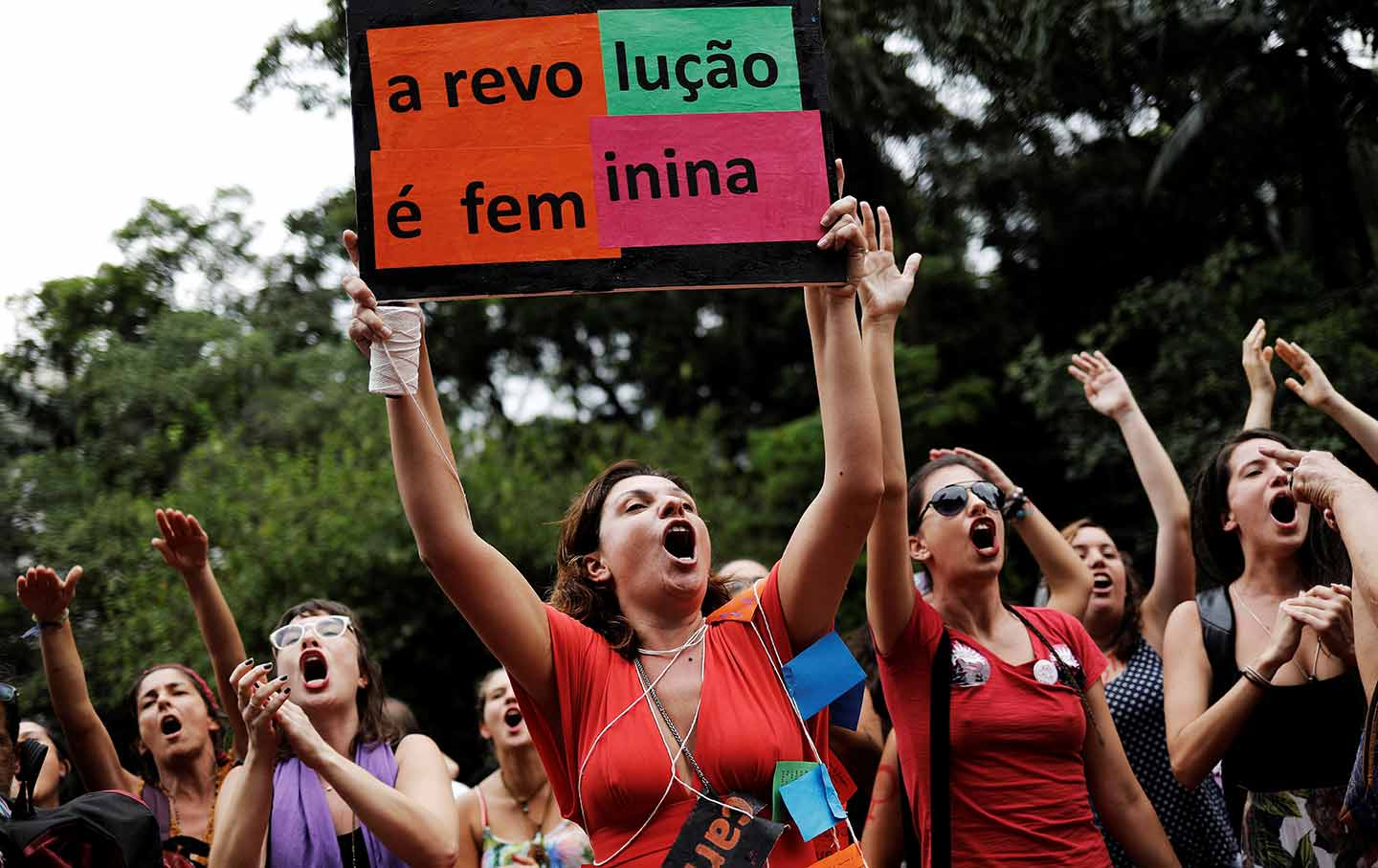 Wednesday this week was International Women’s Day—a full day of action and activism in cities across the world. To talk about how a revitalized feminist movement is changing things, we turned to Rebecca Solnit. She’s got a new book out, The Mother of All Questions. Rebecca is a writer, historian, and activist. She’s written something like 20 books about popular power, uprisings, art, environment, place, pleasure, disaster, and hope. They include Men Explain Things to Me, the definitive work on mansplaining. She’s received a Guggenheim, a National Book Critics Circle Award in Criticism, and a Lannan Literary Award. She writes for The Guardian, and she’s a contributing editor to Harper’s Magazine. Her official bio declares that she’s a product of the California public education system from kindergarten to grad school. This interview has been edited and condensed; listen to the full conversation on the Start Making Sense podcast.

Jon Wiener: We want to talk about the big picture. A revitalized feminist movement is changing things, despite what we see in the White House. How would you describe it?

Rebecca Solnit: There was an extraordinary set of years, 2012, 2013, 2014, where the rules really changed. There were a couple specific cases, the Steubenville rape case involving a high-school football player, and the New Delhi rape case, which was horrific and resulted in the victim’s death, and then the Bill Cosby scandal. (“Scandal” is kind of a tasteful word for serial-rape crime spree.) A bunch of cases drew attention to the broader problem of violence against women in a way I had never seen before. It was kind of amazing, because this stuff happens all the time and pretty much always has, but finally women were in a position to say, “We’re not going to take this anymore. You can’t pretend it’s not happening.” And then to make some changes.

You could see some guys being baffled—like, “What? I can’t punch her? What? I can’t rape unconscious people? What? They have human rights? This is so confusing.” It was a huge shift. It had a lot to do with Obama’s Title IX enforcement on college campuses, but the movement to address campus rape was really led by students, many of them rape survivors. At the other end of the spectrum, there are pop-culture figures, from Emma Watson to Beyoncé, who have had a lot to say about feminism. It was a shift in visibility and in setting standards of acceptability and appropriateness, a shift in how we would describe things, who was going to be heard. It was huge.

JW: Let’s talk about silence. You call silence “the universal condition of oppression.”

RS: Yeah. The longest essay in the book, almost 12,000 words, is about silence. I thought at the beginning I was going to write about how women are silenced. But then I realized that gender as it’s socially constructed is really a set of reciprocal silences. I had to write about the ways in which men are silent and silenced too, that patriarchal power is a trade-off for a certain kind of deadening, a certain kind of absence from kinds of emotion and expression maybe, sometimes from empathy and compassion. That’s a silence that demands other kinds of silence from other kinds of people.

That’s really a way to narrate the whole history of the women’s movement, because the right to vote, the right to get an education, the right to control your body—they may not be literal speech, in terms of saying words out loud, but they’re forms of speech if speech is the right to self-expression and self-determination. The lack of those things is a kind of silencing, “your voice doesn’t matter,” “your opinion doesn’t matter.” It’s always been a fight against that silencing.

JW: You have a wonderful sentence, “The city of silence has more than one street.”

RS: There’s a term that Kimberle Williams Crenshaw, a law professor at UCLA and Columbia originated: “intersectional.” It’s an important part of feminist and human-rights discourse right now: the idea that two different categories, let’s say women’s rights and racial justice, intersect, that we should think about them together, as they inflect and complicate each other. I make atlases. I live in and think about cities a lot. When I think about intersectionality, I always see a literal intersection. That line was really about thinking about justice and identity as a kind of city space, and these points of intersection where we, for example, think about blackness and queerness at the same time, where we think about immigrants and women’s rights at the same time. Let’s hang out on the corner. Let’s meet at the intersection.

JW: We’ve seen furious campaigns to silence women who speak out in defense of feminism. Social media, of course, has become a new battleground. The Guardian did a study of vitriolic comments aimed at their columnists. Remind us what they discovered.

RS: Eight of the 10 most attacked people were women, two were men of color, and the most attacked of all was feminist columnist Jessica Valenti. That’s part of the horrific new landscape that Silicon Valley has created. There are ways that, for example, trans people and human-rights organizations use social media very effectively, but social media have also been a place made by and in many ways for white men. The way, for example, Twitter fails to regulate threats, including rape and death threats and hate speech, has really made it a breeding ground for persecution via threats and insults and doxxing. Against, for example, Anita Sarkeesian, against Leslie Jones, against a lot of people who dare to be female and have opinions at the same time.

JW: If we’re talking about the backlash, I guess we have to talk about the White House.

RS: Every time I think about it now, it feels like a very large boys’ clubhouse, with a bunch of sulky boys plotting how to wage war against everybody else. I know there’s some women in there, but there’s so much misogyny. An almost all white male cabinet. They’ve got one black guy and, for better or worse, Betsy DeVos for education. I joke that his slogan was “Make America 1958 Again.” The desire to return to coal mining, which is obsolete for a lot of reasons; the focus on manufacturing as where jobs are, which they haven’t been for a long time; the attempt to take away reproductive rights and just really roll the clock backward—it’s all a kind of nostalgia for that Happy Days cosmology—or maybe the Father Knows Best cosmology.

But I don’t know if it’ll work. You’re not going to make this a white country the way that it was back then. There are a bunch of people who are homophobic, who are racist, who are anti-Muslim, who are misogynist, but they’re not the majority. I don’t think you’re going to successfully convince the majority that women shouldn’t have jurisdiction over their bodies nationwide. I see it as a civil war. I’m not convinced that they’re going to win. I’m not convinced that they’re going to lose. I also feel like we need to fight like crazy.

JW: You’ve been criticized for emphasizing the victories and successes, for too much celebration of solidarity and liberation, and not enough focus on the obstacles, the outrages, the losses, not enough on everything that remains to be done. What do you say to those critics?

RS: That’s such a standard left-wing framework. I think there are a lot of people who come from the mainstream who love being on the left because we’re talking about things that are being repressed in the mainstream, ugly things, corrupt things. But I grew up in the left. There are a lot of people telling you how much everything sucks out there. The job that I’ve taken on since Hope in the Dark in 2003 is to talk about our victories, about our power, and the possibilities that emerge from these things. And about long-term perspectives, perspectives on the scale on which you can see change. If you look at women’s rights, since when I was born in 1961, women had the vote, but the Ivy League colleges were all segregated against women. Domestic violence was a crime that was basically never enforced unless you turned up dead. Acquaintance rape and marital rape were not considered crimes. Workplace sexual harassment was not a crime. Discrimination on the basis of gender was an almost universal standard practice. Women were for the most part not in positions of power, in government, law, education, medicine, industry, or anything else.

Many leftists also have a strong belief that victories make people go home with a sense that “now the job is finished.” For example, same-sex marriage is a huge victory. I think you can celebrate something like that. But it doesn’t mean homophobia disappeared overnight. In fact I think the reason people more often go home and give up is because they think, “We have no power. We’re not changing anything. These problems are intractable. We never win.”

It’s an exciting moment as well as terrifying and horrifying one. I believe what happens fundamentally is up to us. Will people stay engaged? Will they push hard? Will they stop some of these things from happening? We’ll see.

Listen to Rebecca Solnit’s interview on the Start Making Sense podcast, and subscribe for new episodes each Thursday.