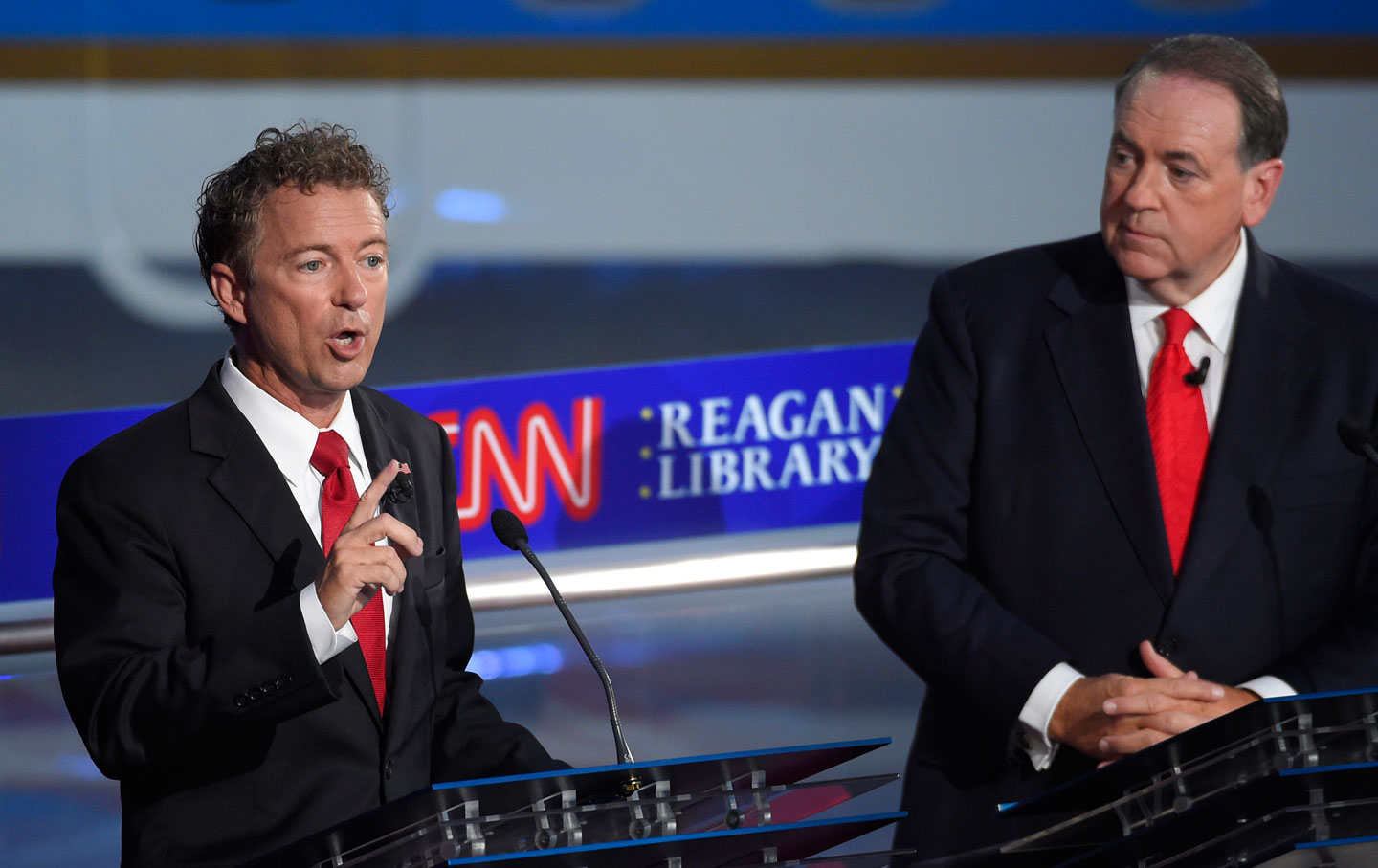 In the weirdest non sequitur of a often-incoherent second Republican presidential debate, the billionaire front-runner for the party nomination declared, “Rand Paul shouldn’t even be on this stage. He’s number 11. He’s got 1 percent in the polls. There’s too many people onstage already.”

As he has been on so many points, Trump was entirely wrong on this one.

Paul distinguished himself with coherent questioning of mass incarceration, calls for criminal-justice reform, and aggressive referencing of the injustices that extend from a failed drug war. The senator from Kentucky had one of the best moments of the debate when, during a back-and-forth over Jeb Bush’s youthful inhaling of marijuana, Paul put things into perspective for the former Florida governor: “Kids who have privilege like you do don’t go to jail. But the poor kids in the inner city still go to jail.”

And when the debate turned to foreign policy, Paul made more sense than the rest of the runners combined.

“I’ve made my career as an opponent of the Iraq War,” declared the senator, who reminded the crowd that “The Iraq War backfired and did not help us.”

“I’m not sending our sons and our daughters back to Iraq.” —Rand Paul

Those lines did not earn Paul a lot of applause Wednesday night. This Grand Old Party does not well remember—nor respect—the wisdom of Dwight Eisenhower’s warnings about a military-industrial complex or the example of “old-right” Republicans who opposed military adventurism.

But Paul displayed a steady awareness of that history. His great contribution to the debate was to offer an alternative to the bombast and bluster that came Wednesday night from many of the other contenders—and that, frankly, comes on a regular basis from prominent figures who position themselves across the political spectrum.

The senator warned, “”If you want boots on the ground, and you want them to be our sons and daughters, you’ve got 14 other choices. There will always be a Bush or Clinton for you if you want to go back to war in Iraq.”

While others spoke of putting boots back on the ground in the Middle East, he dissented, saying, “The first war was a mistake and I am not sending our sons and daughters back to Iraq.”

Paul’s dissents extended beyond objections regarding the Iraq imbroglio—as was appropriate during the course of a debate that produced plenty of objectionable statements from the crowd of Republican front runners and pretenders.

Early in the evening, several of the contenders were stumbling over one another in express their readiness to rip up the Iran nuclear agreement, with Senator Ted Cruz trumping them all by promising, “If I am elected president, on the very first day in office, I will rip to shreds this catastrophic Iranian nuclear deal.”

A few minutes later, in a break from what New Jersey Governor Chris Christie referred to as “this childish back-and-forth” with Trump and Fiorina over who was the worse CEO, Fiorina said there would be no back-and-forth with the president of Russia. “Having met Vladimir Putin, I wouldn’t talk to him at all,” she announced. “We’ve talked way too much to him.”

This is where Paul really stepped up.

Noting the location—the Ronald Reagan Presidential Library in Simi Valley, California—Paul said with regard to the “wouldn’t talk to him” line: “Well, think if Reagan had said that during the Cold War? We continued to talk with the Russians throughout the Cold War which [was a] much more significant [challenge than] where we are now.”

Should we continue to talk with Iran? Yes. Should we cut up the [Iran nuclear] agreement immediately? That’s absurd. Wouldn’t you want to know if they complied? Now, I’m going to vote against the agreement because I don’t think there’s significant leverage, but it doesn’t mean that I would immediately not look at the agreement, and cut it up without looking to see if whether or not Iran has complied.

We do need to be engaged with Russia. It doesn’t mean we give them a free pass, or China a free pass, but, to be engaged, to continue to talk. We did throughout the Cold War, and it would be a big mistake not to do it here.

There was a similar moment when the question of intervention in Syria arose.

Sometimes both sides of the civil war are evil, and sometimes intervention sometimes makes us less safe. This is real the debate we have to have in the Middle East.

Every time we have toppled a secular dictator, we have gotten chaos, the rise of radical Islam, and we’re more at risk. So, I think we need to think before we act, and know most interventions, if not a lot of them in the Middle East, have actually backfired on us.

There are plenty of issues on which Rand Paul is wrong. He is not so steadily anti-war as his father, former congressman and 2012 presidential contender Ron Paul, or as “old-right” Republicans like North Carolina Congressman Walter Jones Jr.

There are plenty of things that Paul has said and done that merit skepticism, and opposition.

But the senator—and his dissenting views with regard to foreign policy—belonged on the main stage Wednesday night. Indeed, it was Rand Paul, not Donald Trump, who made Wednesday night’s gathering of Republican presidential contenders a debate.