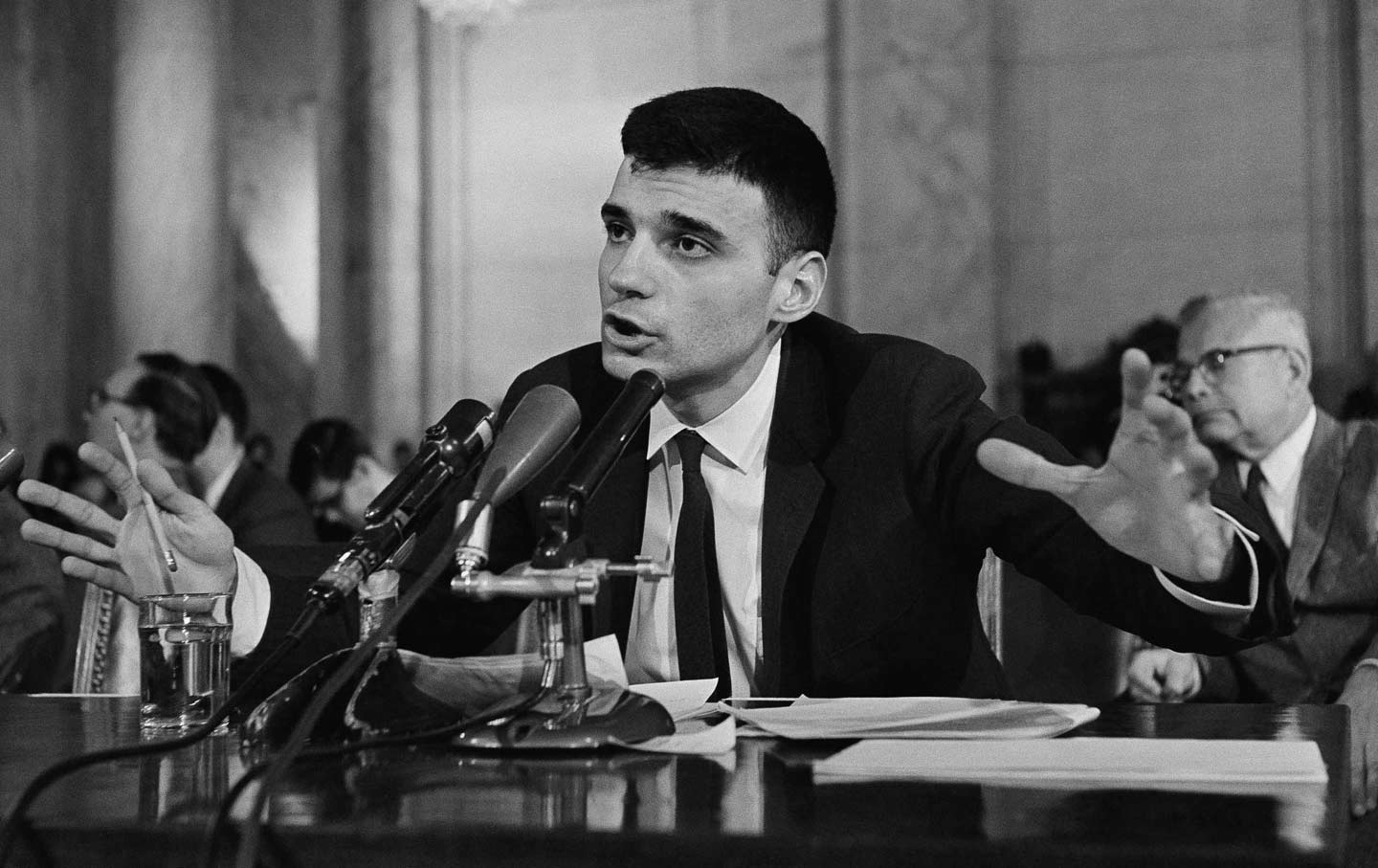 Taking the stand: Testifying before the Senate, March 1966 (AP)

Ralph Nader is a man of the present, not the past. Fifty years after he became a national figure, the consumer advocate, civil libertarian, and former presidential candidate is fighting harder than ever to reverse what he sees as the deterioration of American democracy. Here’s some of his recent conversation with John Nichols.

John Nichols: As an Arab-American, what do you think about the congressional votes to bar Syrian refugees, and about the way Republican presidential candidates are talking about Arabs and Muslims?

Ralph Nader: It’s mass bigotry—stereotyping an entire ethnic group or an entire religion. We should have learned from the past what the consequences are when that happens. As you know, we did the same thing to the Jews before and during World War II, when they were denied [entry as refugees]. We did it to the Japanese [with the internment camps]. We now, as a society, regret both tragedies. It seems like the Republican candidates learn nothing from history and are pandering to an extreme primary vote—which they will regret in the general election. I don’t think they represent any sizable portion of the population; they’re basically trying to get press jockeying against each other in a dynamic that makes them more extreme, more bigoted, more inaccurate.… It’s really an amazing racist epidemic that’s infecting the Republican candidates. I don’t say all of them, but most of them are mouthing this sort of thing.

JN: George W. Bush decried anti-Muslim, anti-Arab rhetoric after 9/11. Is it your sense that the Republican Party is becoming significantly more extreme?

RN: It’s overwhelming. We have here the most ignorant, bigoted Republican presidential slate in the history of the party. Not only are they bigoted, they’re factually wrong…and in terms of their tactics, they are heating up those people in this country who are susceptible to that. They’re disgracing the party.

JN: Is this a measure of what is broken in our politics? Is it just individuals who have gone off the rails, or are changes in our media, changes in the political dynamic, feeding this behavior?

RN: I think every four years the decay gets worse in both parties. You can just see it. Compare Republicans in the Eisenhower or even the Nixon period; compare the Republican slates. It was often said in 2012 that they had the B-team running. Now they have the D-minus-team, or the F-team, running! It’s just amazing where these people are coming from: They’re corporatist to the core, Wall Street to the core. They’re basically puppets of satraps—plutocratic PAC holders. It’s almost like medieval courts; they each have their own megabillionaire PAC supporting them.

JN: In your 2015 book Return to Sender, you suggest that presidents of both parties are increasingly cut off from Americans. You illustrate this by reproducing letters you sent to Presidents Bush and Obama on fundamental issues—letters that were never even acknowledged.

RN: They’re creating their own bubble. Even though Obama said he wanted to read 10 letters every evening because he didn’t want to live in the bubble, he’s living in a huge bubble. When Obama didn’t answer my invitation to talk to 1,000 leaders of civic, labor, environmental, religious groups [at a hotel ballroom near the White House], as Jimmy Carter did shortly after his election—when he has the time to fly to Colorado or Iowa or wherever to make a photo opportunity but doesn’t even acknowledge an invitation like that—[it becomes clear] he doesn’t have the time to address the civil society made up of the people who elected him.

JN: It’s not just presidents. The press once wrote about letters, about popular appeals from prominent individuals, groups of scientists, activists who raised major issues.

RN: The most democratic form of citizen communication is being destroyed—that is putting pen to paper, sending it through the mail. Nobody can censor you, nobody can stop you. The most democratic form of communication is being ignored. And it isn’t even a matter of concern that it’s being ignored; there are no columns, no editorials, nothing. When a deteriorating democratic society cannot even describe markers of decay in one area or another, that takes the decay to a new measure of unconsciousness.

JN: In your 2014 book Unstoppable, you argue that political and media elites don’t want us to know that people on the left and right can unite and beat Wall Street.

RN: The ruling powers control people, in part, by divide and rule. They love that which tends to keep people fighting each other instead of fighting the power structure. In the past, we have had left-right coalitions. They passed auto-safety legislation. They passed the Freedom of Information Act. In 2013, whistleblowing protections were opposed by corporate lobbyists ferociously, but the lobbyists were finally overwhelmed by a left-right coalition.

JN: You argue that people must break out of partisan constraints and push independently on issues such as trade policy and the Trans-Pacific Partnership.

RN: We’re not going to beat the TPP with just the same opposition measures and know-how. There’s got to be a left-right alliance on that.

JN: You still believe that people can win on issues as big as the TPP?

RN: When members of Congress see left-right coming, they turn white with fear; they blanch with fear. I’ve seen it happen in the past.

JN: And it can happen again?

Tragedy and Hope on the Western Front