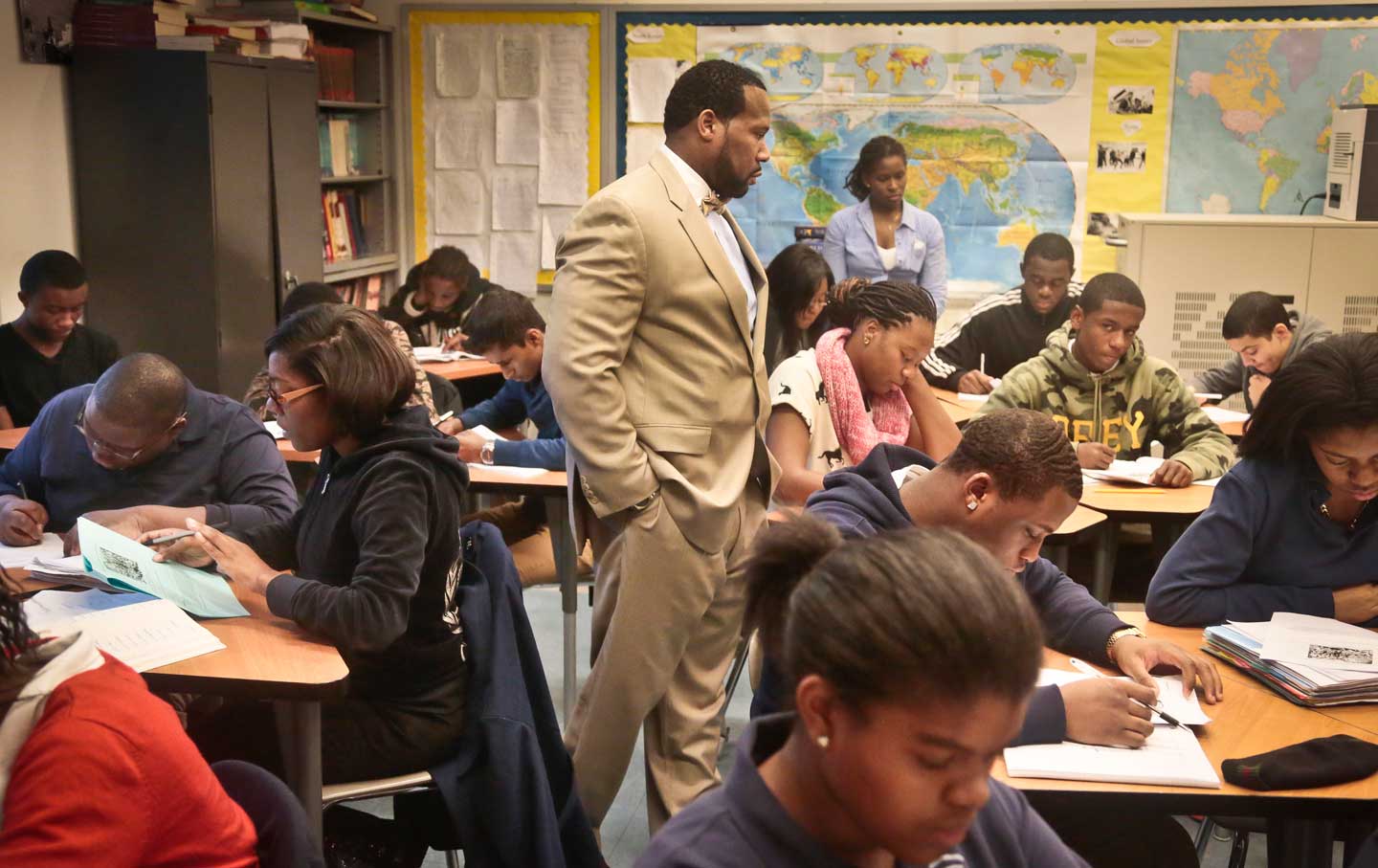 An onslaught of videos depicting African Americans shot and killed by the police. A Republican presidential candidate who launches his campaign by hurling invective about the supposed depravity of Mexican immigrants and then charges toward the White House with the aid of racist dog whistles. Alt-right power players staking a claim to Donald Trump’s kingdom of bluster and bombast as a resurgent white-supremacist movement, finding a happy home in the Twitter-sphere, turns cyberbullying into the new burning cross.

I’m Trying to Find Hope, but This Campaign Isn’t Helping

It should come as no surprise, given the pervasiveness of such race-centered strife and chaos as well as the hyper-saturation of its myriad horrors on social media, that a recent New York Times/CBS News poll found that Americans are as pessimistic about race relations as they were during the 1992 Rodney King riots.

New research suggests the stress all of this racial conflict generates may itself do lasting damage to the next generation of people of color in the United States. According to a new paper out of Northwestern University, race-based stress kick-starts psychological and biological changes among black and Latino children that compromise their school performance and ultimately widen school achievement disparities between races. “Just the awareness of these events and the awareness of risk of discrimination, risk of death is enough to mobilize stress processes,” says one of the paper’s authors, Emma K. Adam, PhD, a professor of human development and social policy at Northwestern.

The math and reading achievement gaps between white students and black and Latino students have tapered off since the 1970s, with progress stalling and even reversing somewhat during the late 1980s and the 1990s. Achievement gaps today are 30 percent to 40 percent more narrow than three decades ago, but they remain substantial. Black and Latino students generally lag about two to three grade levels behind their white counterparts, an effect that hinders their prospects in the workforce and exacerbates income inequality.

Previous research into the cause of such educational disparities has largely focused on socioeconomic factors, which overlap considerably with race, as the major drivers. Children coming from economically disadvantaged homes tend to do worse in schools that are poorly funded to begin with. But even when controlling for socioeconomic status, researchers find that racial achievement gaps remain.

The new Northwestern paper, a review of a trove of psychological research published in the September issue of American Psychologist, seeks to widen the scope of the achievement-gap discussion. It argues that racism’s direct effects on young people are in fact partially responsible for such disparities—not the material realities of discrimination, but the physical and emotional experience of racism itself. The authors cite previous research showing that when children confront the threat of being negatively stereotyped or suffering discrimination because of their race, they experience changes in levels of the stress hormone cortisol and also suffer from poorer quality and quantity of sleep.

“Your attention is focused on the stressor and not on other things such as school lessons or tests.” —Study author

Ideally, the level of cortisol rises in the morning to help people wake up and get charged for the day and then falls in the evening to prepare for sleep. A moderate amount of the hormone helps with concentration, but too much is a hindrance. Scientists have found that African Americans tend to have flatter cortisol patterns, leaving them less alert when they need to be and in a poor position to get a good night’s sleep. According to the new academic paper’s authors, the stress of racism may help explain this different hormonal pattern, as opposed to any intrinsic biological makeup among blacks.

A study of cortisol levels conducted in 2006 among African-American students at Duke University provided evidence of how current events can affect shifts in cortisol levels among young people of color. The study happened to overlap with a campus incident, one that sparked a national firestorm, in which a black woman accused white members of the university Lacrosse team of rape. The Duke researchers found that the study participants’ cortisol levels rose considerably in the wake of the hugely divisive incident. (The study’s findings are limited by the lack of a non-black control group, however.)

Of course, a poor night’s sleep may also put young people at a disadvantage in school. This is particularly true among black students, with research finding that compromised sleep impacts their academic performance more than among whites.

“These stress systems are vigilance systems,” Adam says of the sleep and stress hormone responses, noting that humans evolved to sleep more lightly in the face of danger. “They’re intended to protect you by focusing you on that stressor and helping mobilize your body and brain to deal with that stressor. But that means that your attention is focused on the stressor and not on other things such as school lessons or tests.”

A classic 1995 paper found that when black students were told prior to taking a test that its results were diagnostic of their intellect, they did much more poorly compared with white students who were told the same thing. University of California, Berkeley psychologist Claude M. Steele, PhD, who led the study while on the faculty of Stanford, concluded that the prospect of confirming the stereotype of blacks as intellectually inferior to whites led to distracting anxiety—an emotion tightly bound with cortisol—that compromised the black participants’ performance.

Reflecting on the new American Psychologist paper, Steele says it succeeds in “articulating in precise ways how you go from the social pressure, the identity-based pressure, all the way to school achievement. I think it will be a new stake in the ground in this discussion and in our understanding of these issues.”

Such pressure includes the effects of racial microaggressions, according to the new paper’s lead author, Dorainne J. Levy, PhD, who developed the work while a doctoral candidate at Northwestern’s social psychology program and who is now a post-doctoral scholar at Indiana University. Subtly racist remarks, Levy argues, “might even be more damaging than blatant bias because they are often accompanied by uncertainty regarding the causes of the negative treatment. Such uncertainty can make people anxious and increase psychological distress.”

Previous research has shown the stress of experiencing racism may also drive health inequities, since changes in cortisol levels and sleep may contribute to cardiovascular disease, obesity, drug use, and depression. And racism may not be the only form of bias and prejudice that causes a pattern of destructive stress; women, LGBT people, and those with low socioeconomic status may have similar experiences.

The goal of the Northwestern team’s scholarship is to prompt future exploration into the pathways between racism and school success. They hope researchers will devise effective interventions—absent ending racism itself—that can help mitigate the apparent effects of racism on young people’s sleep and cortisol, as well as on other factors such as inflammation and mood. One coping mechanism could be getting parents and guardians to promote better sleep habits among children, including establishing a regular bed- and wake-time schedule, and engaging in calming, comforting rituals at the end of the day like reading together.

Research has also shown that efforts to promote a positive sense of belonging to an individual’s own racial group can help blunt the effects of racism, as can improving other means of coping with stress, such as talking over problems with a confidant. For example, an ethnic studies school curriculum may wind up soothing stress hormones and in turn boosting students’ grades in other classes.

Adam emphasizes, however, that the ultimate solution isn’t to cultivate more skills in dealing with the effects of racist society among young people of color, but rather for society to deal with racism on a grand scale.

“We would hate to simply place this on the individual and say, ‘Oh, society go on the way you are, we’ll just fix the individual’s response to unacceptable circumstances,’” she says. “We need to be addressing things at a broad societal level as well as trying to promote individual well-being. As the nation grapples with race and racial issues and racial disparities, I think that to the extent that they can grapple with those issues constructively, which is not really currently happening, then these types of stress processes should hopefully somewhat resolve.”

Maybe check back in after the typhoon of the presidential election has finally subsided.