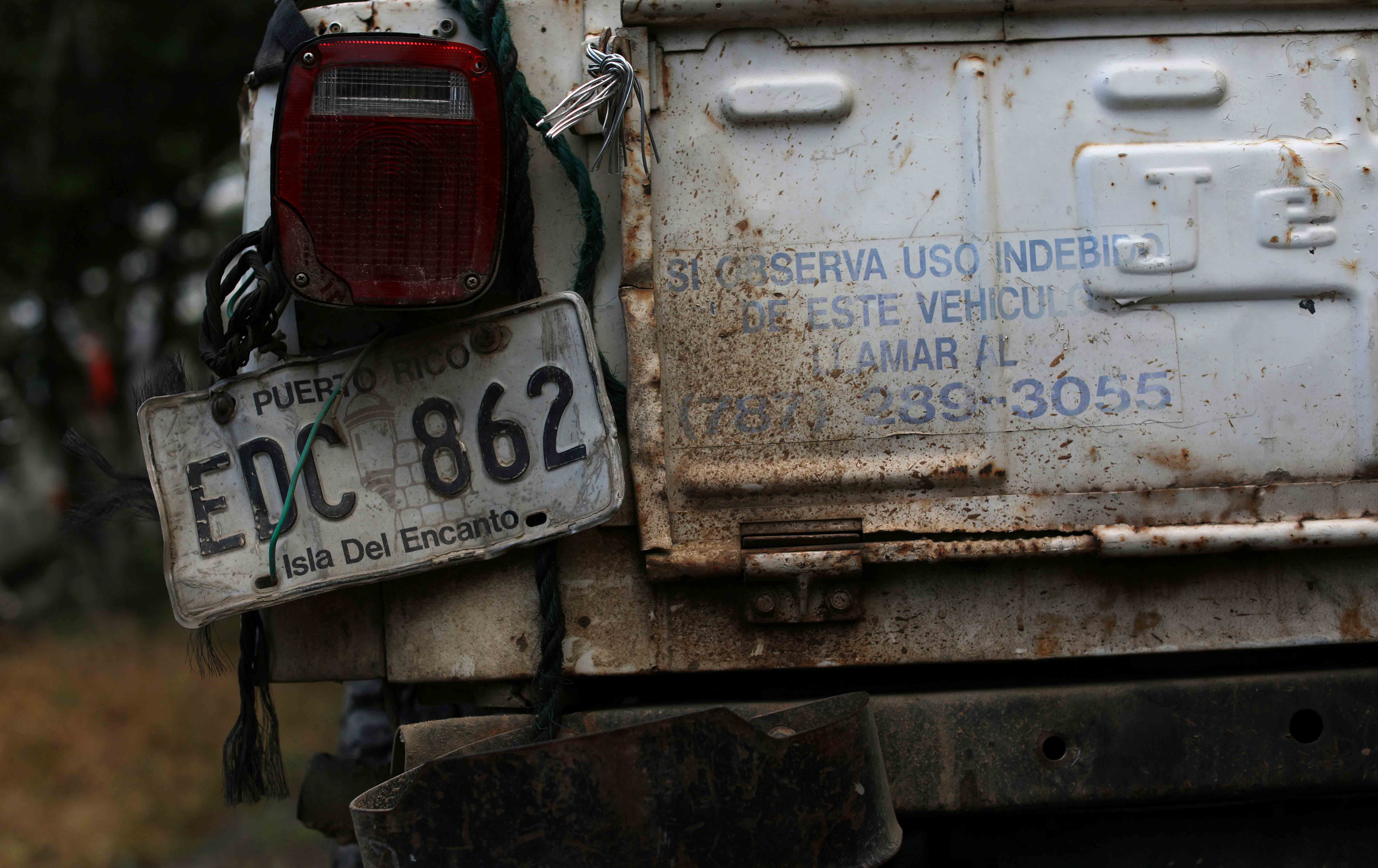 The license plate of a jeep of Puerto Rico's Electric Power Authority (PREPA) reads "Puerto Rico, Island of Enchantment" as the island's fragile power system is still reeling from the devastation wrought by Hurricane Maria in 2018. (Reuters / Alvin Baez)

President Trump promised voters he would revive coal country, bringing jobs back to the beleaguered mining towns of rural America. But one of the key hot spots for King Coal today is a world away from Appalachia’s Coal Belt—it’s sitting on the outer rim of the American empire in Puerto Rico, where over 2 million tons of toxic coal ash has been dumped by the territory’s multinational energy giant, the AES Corporation. Now AES’s pollution, and its dirty financial dealings, are surfacing in the wake of 2017’s Hurricane Maria, and drawing battle lines between the territory’s investor class and grassroots community activists.

A grassroots campaign stretching from the East Coast to Puerto Rico celebrated a small step forward last week when Kristina Johnson, the chancellor of the State University of New York (SUNY), resigned from her position on the board of AES. According to a SUNY spokesperson, the resignation took place in late February, and was not widely publicized. But it followed a hailstorm of public scrutiny, as activists called for her resignation as a way of severing ties between the university and AES’s pollution scandal. Campaigners cited the unseemly contrast between her public role as the leader of SUNY’s Puerto Rican Task Force, an academic and technical-support program to aid with the territory’s recovery, and AES’s legacy of destructive dirty-energy investment. Though it’s not known whether public pressure spurred Johnson’s departure, activists say the move is a sign of political resistance rising against the kind of predatory, environmentally destructive investment that AES embodies.

Since 2002, when AES’s coal-fired electricity plant was opened under the auspices of the Puerto Rico Electric Power Authority, AES has been littering the territory with poisonous coal ash waste. Over the past 17 years, the Virginia-based company, which produces 17 percent of the territory’s electricity, is responsible for roughly 400,000 documented tons of coal ash, dumped without adequate safeguards, exposing local communities to major public-health hazards. According to investigations by the local media outlet Centro de Periodismo Investigativo (CPI), there is significant evidence of a “cancer epidemic” in the areas exposed to the coal ash, as well as respiratory diseases. Studies commissioned by the company have further revealed that because the plant has not been equipped with protective barriers, the toxic residues of the plant have leached into the soil and contaminated groundwater with toxins like arsenic and mercury. In addition, the Puerto Rico Environmental Quality Board (Junta de Calidad Ambiental ) allowed the company to dump over 2 million tons of the toxic ash in 12 municipalities across the territory from 2004 to 2011, also without structural safeguards. As CPI explains, the environmental dangers are deeply ingrained in the local landscape—not only because there are virtually no protections against ongoing contamination through rain and runoff, but because the pollution was literally engineered into the infrastructure of the impacted communities, “as landfill in residential and commercial projects, as well as roads and water retention ponds.” A further 1 million tons of coal ash is simply unaccounted for. Environmental watchdogs have warned that Hurricane Maria aggravated the public-health crisis by churning up contaminants. [Disclosure: The author is an adjunct professor at City University of New York, which is part of the SUNY system.]

Now activists are seeking accountability on both the environmental and financial fronts. According to the watchdog organization Little Sis, which has conducted a forensic investigation of the energy-industry giants fueling the territory’s debt crisis, Puerto Rico’s financial collapse is rooted in a long history of predatory investment, which has mired the territory in toxic debt, impoverished state institutions, and turned the energy sector into a cesspool of exploitative “development” deals. Hurricane Maria’s trail of devastation compounded the territory’s economic, environmental, and social crises—yet the recovery plan imposed by Washington actually doubles down on the failed development model of the past, ensuring that investors can continue to bleed the territory dry. 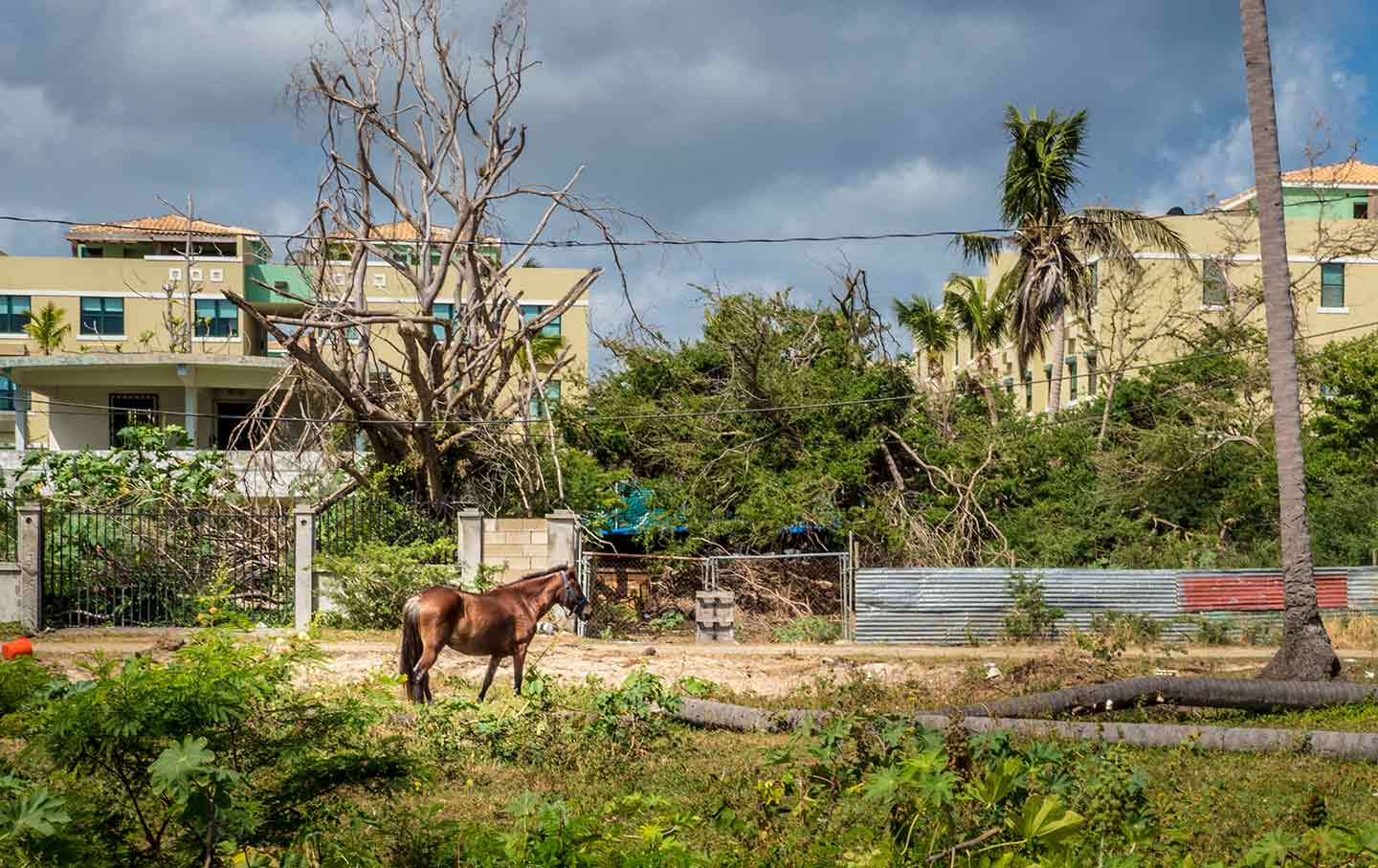 Can Farming Save Puerto Rico’s Future?

While AES has come under fire for its dumping, Trump’s EPA, led by former coal lobbyist Andrew Wheeler, has given AES a free pass on cleaning up its mess. Originally, the ash impoundments were on a deadline to close next month, but Wheeler granted the company an 18-month extension, CPI reports, while rolling back pollution standards. The arrangement will allow state officials to ensure that the site “meet[s] ‘adequate’ environmental standards, instead of certified professional engineers as established by the original regulations.”

But civil society is mobilizing against the business interests that have swarmed over the territory since the hurricane. As concerns about climate change mount, the resistance has zeroed in on the fossil-fuel interests that have long capitalized on Puerto Rico’s economic dependency on the mainland. There are budding hopes that a grassroots movement for overhauling the country’s entire energy system could help transition the territory to renewable sources like solar. Last October, long before the Green New Deal percolated up to the House floor in DC, Puerto Rico’s legislature began considering a bill to direct the territory to convert to 100 percent renewable energy by 2050.

Overall, Little Sis stated in response to Johnson’s departure from the AES Board, the move “illustrates an emerging consensus opposed to the dirty energy operations on Puerto Rico that has put the company on the defensive as it attempts to extend its valuable contract with the territory’s public utility. Though Johnson has stepped down, her company’s toxic legacy on the territory remains as residents seek a transition to renewable energies and justice for the damage AES has already inflicted.”

Currently, in the absence of further financial disclosures about her personal investments, it’s unclear whether she has personally divested her assets from the company. According to Robert Galbraith, senior research analyst with Little Sis, “as long as Johnson keeps holding AES stock, she is still profiting from fossil fuels, which is a major conflict with her role at a public university.”

But the AES controversy exposes the rift between the restive communities seeking real change in Puerto Rico, and the corporate class encircling the aftermath of Hurricane Maria and hoping to cash in with investor-led “recovery.” For the territory’s recovery rebels, real restoration of Puerto Rico begins with ousting Wall Street vultures and charting a new, greener course, built not on a pile of toxic ash but on the power of self-determination.