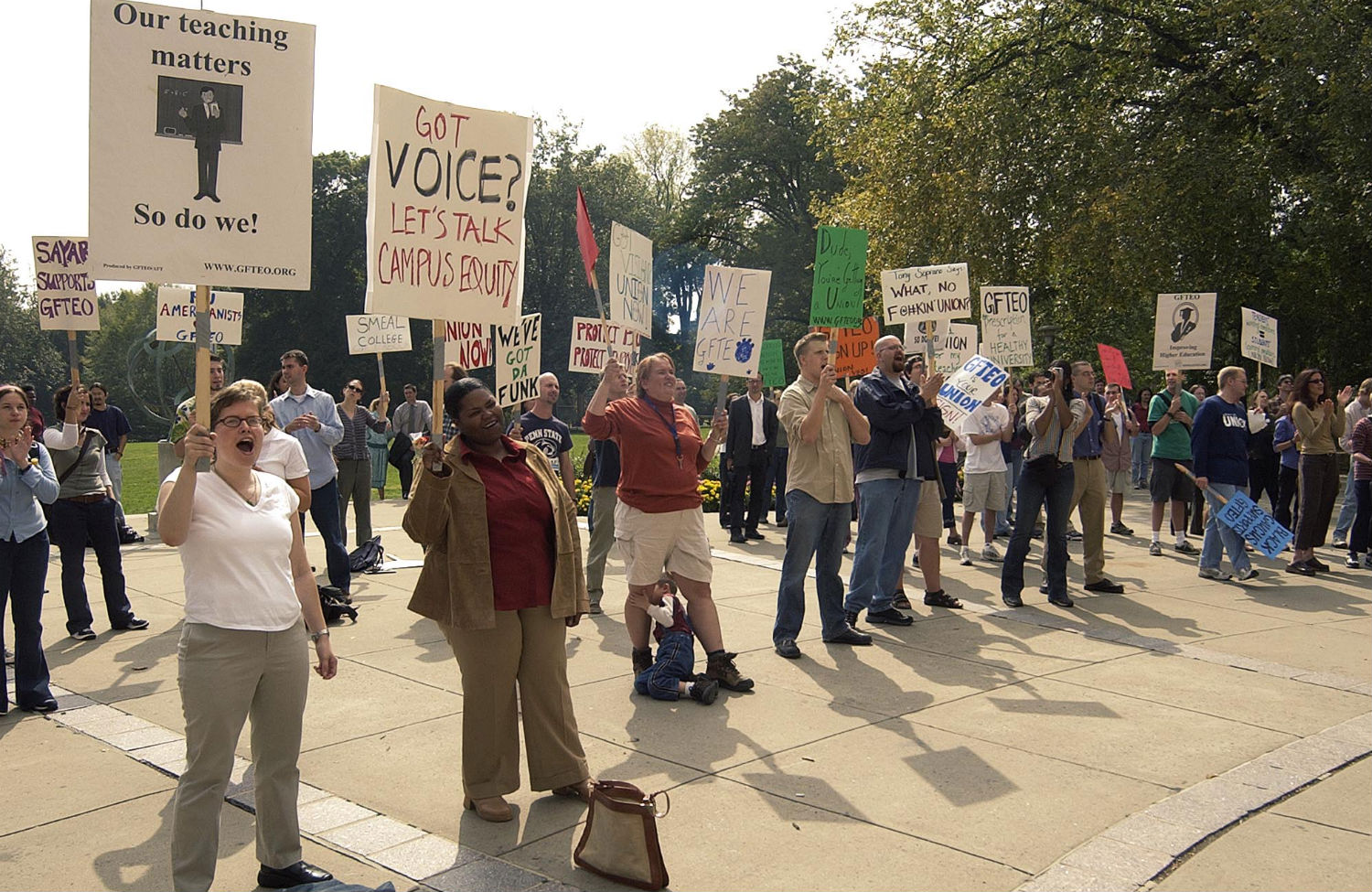 On November 20, hundreds of unionized graduate student instructors at Berkeley went on a 24-hour solidarity strike to protest the university’s intimidation tactics against university support staffers who’d gone on strike this past spring. An e-mail from a mathematics faculty member to his grad instructors explaining why he was crossing the picket line and why they should too went viral. For the prof, named Alexander Coward, also saw reason to protest: to dissent against the silly notion of solidarity in the first place.

So what are they responsible for?

You need to optimize your life for learning.

You need to live and breath [sic] your education.

You need to be *obsessed* [sic] with your education.

Society is investing in you so that you can help solve the many challenges we are going to face in the coming decades, from profound technological challenges to helping people with the age old search for human happiness and meaning.

That is why I am not canceling class tomorrow. Your education is really really important, not just to you, but in a far broader and wider reaching way than I think any of you have yet to fully appreciate.

Society, and one’s education, apparently have nothing to do with issues of decent wages and working conditions and keeping higher education affordable and its institutions accountable. Good to know.

There is something about the very grown-up action of sacrifice for the sake of solidarity that turns some professors into patronizing asses. For Professor Coward also wrote, “All this may sound like speaking in platitudes. However it is a point worth making to all of you because you are so young. One of the nice things about being young is that your thinking can be very clear and your mind not so cluttered up with memories and experiences. This clarity can give you a lot of conviction, but it can also lead you astray because you might not yet appreciate just how complicated the world is.” According to his CV, Coward was born in 1981. That makes him a grizzled thirty-one or thirty-two years of age.

Coward, I’ve found, has plenty comrades in anti-comradeship who are old enough to know better. I’ll never forget the first time I heard the argument that, “even though I support unions I don’t support graduate students unions,” since graduate students were “apprentices,” not “workers.” It was over dinner with an Ivy League professor (not this one, another one) whose writings had taught me a great deal about what union solidarity was and why it mattered in the first place.

Then there’s this letter I was shown, sent by a political science professor at the University of Chicago, answering a public letter from students in his department about why they were working to organize a union. The professor’s response began this way: “First off, let me preface these remarks by saying that when I was in graduate school at Berkeley in the 1990s, I was very active in the graduate student unionization movement. I was shop steward for the political science department for several years and was very active in a three week campus wide teaching strike we held in the fall of 1992. It may also be worth mentioning that I come from a working class family (I was the first and only person in my family to go to college) and I grew up around a lot of issues of collective bargaining. So I’m highly sympathetic to issues of collective action.”

Just not your collective action. For he continued, “That said, I found your co-signed letter to be naive, unconvincing, and, quite frankly, kind of offensive. It is naive in that you seem to really think a union would not change relationships between graduate students and the faculty. I don’t know if either of you have ever been members of a union or worked in a unionized environment, but unions inevitably alter the relationships between union members and the people the interact with, be they management, clients, customers, or what not. The formalization of such relationships is, in fact, the central goal of a union. Your letter says ‘Our goal is simply to gain a voice in the decisions that affect our working conditions.’ Well, these decisions are largely made by the faculty. Thus, if you want a collectivized voice in these decisions, you will be unavoidably shaping your relationships to faculty members.”

He then claimed, “Let’s say each quarter of being a teaching intern requires about 200 hours of work (which is a high estimate), as graduate student ‘employees’ you are effectively making at least $300 an hour for the limited amount of time you are ‘working.’ What’s more egregious is the fact that most of the faculty I know do not think of interns [the University of Chicago’s term for teaching assistants] as employees but think of the internship as another educational experience.”

He also said the grad-student-union organizers’ arguments were “unconvincing because you do not specify any significant hardships regarding your ‘working’ conditions”—that word, working, was in quotes—and that he found the letter “off-putting in the tone of entitlement that rings through it. Every year there are hundreds of applicants for a very small number of slots to study here. You are very lucky to be here, just as I am very lucky to teach here. When you were admitted to the university, you were not hired. You were offered a spot as a student. The university owes you nothing beyond what it initially proposed and what you accepted. To call yourself an employee and complain about an absence of cost-of-living adjustments, health insurance, or the burdens of being a graduate student…sounds both presumptuous and petulant.”

Nothing off-putting, entitled, presumptuous or petulant about that.

It’s interesting to consider such arguments, which are common among faculty, in the context of a brilliant analysis of what this supposedly entitled life of the aspiring scholar actually looks like in the real world. It appeared during the Berkeley strike, and argues that the process of winning a tenure-track job, and then earning tenure, resembles nothing so much as climbing the greasy pole in a drug gang.

If you take into account the risk of being shot by rival gangs, ending up in jail or being beaten up by your own hierarchy, you might wonder why anybody would work for such a low wage and at such dreadful working conditions instead of seeking employment at McDonald’s. Yet, gangs have no real difficulty in recruiting new members. The reason for this is that the prospect of future wealth, rather than current income and working conditions, is the main driver for people to stay in the business: low-level drug sellers forgo current income for (uncertain) future wealth. Rank-and-file members are ready to face this risk to try to make it to the top, where life is good and money is flowing.

What you have is an increasing number of brilliant Ph.D. graduates arriving every year into the market hoping to secure a permanent position as a professor and enjoying freedom and high salaries, a bit like the rank-and-file drug dealer hoping to become a drug lord…. Because of the increasing inflow of potential outsiders ready to accept these kind of working conditions, this allows insiders to outsource a number of their tasks onto them, especially teaching, in a context where there are increasing pressures for research and publishing. The result is that the core is shrinking, the periphery is expanding, and the core is increasingly dependent on the periphery. In many countries, universities rely to an increasing extent on an ‘industrial reserve army’ of academics working on casual contracts because of this system of incentives.

And indeed this analysis notches perfectly with the stories I solicited for my series—here, here, and here—on the plight of young aspiring scholars. I still get responses, including one from a junior professor, rated one of the best in the history of Indian River State College by students. He was assigned six classes to teach. He asked the school’s human resources manager how to apply for health insurance. “I lost all my classes as the college avoids the Affordable Care Act in contempt of Congress.  So I established the Adjunct Faculty Union at Indian River State College (AFU-IRSC). The college blocked my e-mail access to the Campus Coalition (Student) Government in violation of Section 7 of the Labor Management Relations Act. Adjuncts teach 75% of IRSC classes for $1600/16 weeks, about the lowest in the state. Admin treats adjuncts like we are invisible, refusing to talk to us or give us job security for doing a great job. Corrupt patronage has replaced merit in higher education.” He offered the story in memory of the now-famous adjunct professor of French Margaret Mary Vojtko, who died from inadequate medical care. Vojtko never earned more than $25,000 a year and received no health benefits despite her twenty-five years of loyal service to a Catholic University, Dusquesne, which argued that its “religious beliefs” should exempt it from federal labor laws.

I also got responses from tenured professors. And their dominant tone was that same clueless arrogance we see above. One, a philosophy professor at a small liberal arts college in the Northeast, allowed that while things could be improved, and “I would like to see more tenure-track jobs and fewer adjuncts,” academia was still after all a meritocracy. He argued that “[f]riends like your autodidact”—he was referring to the example I gave of a recent PhD from one of the greatest universities in the world, who wrote brilliantly and insightfully, was a natural-born teacher and applied to a hundred jobs to no avail before realizing “tenured employment is almost unimaginable” because of his undeveloped suck-up skills—“will slip through the cracks if, despite actual excellence, they can’t muster what the academy considers evidence of excellence…. I think of a tenure-track job like an actor getting a job at a repertory company, or a baseball player being hired to play baseball full-time—there are just too many people lining up to do such jobs to give them to everyone.”

This was supposed to be a defense of the system.

Another, who teaches at one of the nation’s largest, richest and best public universities, complained that after renting a conveniently located house, paying for daycare and servicing his student debt, “groceries end up on the credit card by the 20th of every month.” As a result, “my credit rating is just above Charles Manson’s and my hair is falling out.”

A sad story, but not quite at the level of Margaret Vojtko’s, is it?

Rick Perlstein on the death of Margaret Mary Vojtko.

Correction: This post has been updated to indicate that the University of California strike lasted 24 hours, not three days.