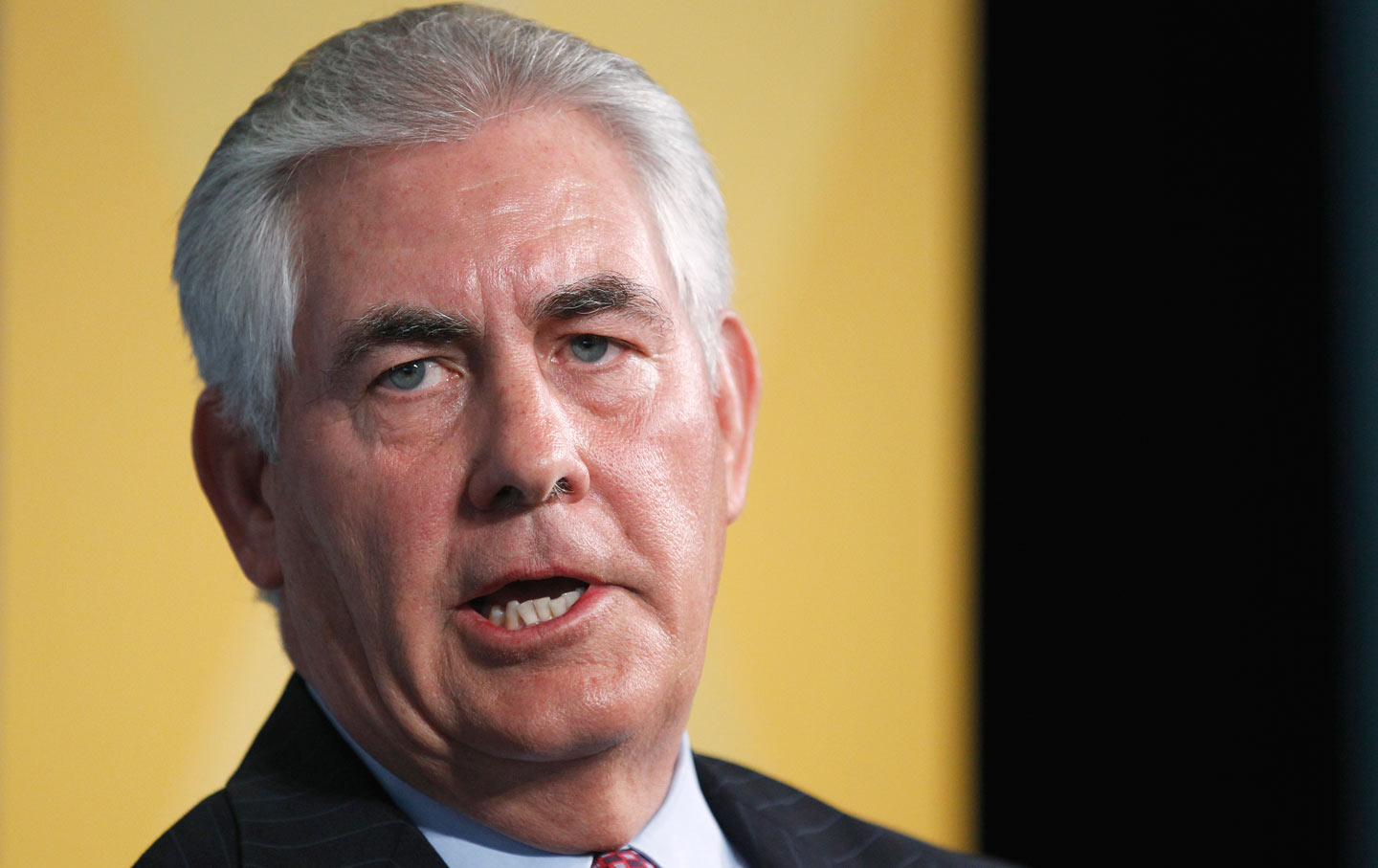 Most of the commentary over Donald Trump’s presumed secretary-of-state nominee Rex Tillerson concerns the Exxon Mobil CEO’s closeness to Russia, and Senate Republican discomfort with that relationship. But Trump and Tillerson share something else that hasn’t gotten as much attention—a penchant to rip off their business partners.

In ExxonMobil’s case, I’m talking about shareholders. Tillerson’s company has been under formal investigation by the Securities and Exchange Commission since August for failing to accurately value its proven oil reserves.Those reserves are critical to investors for assessing the future viability of the company. Without the certainty that the company can keep crude oil flowing decades into the future, ExxonMobil stock would plummet. Rewriting the disclosures to investors with lower valuations would cost the company billions of dollars. And actually the entire oil and gas industry would be affected by a new standard rather than the current ad hoc system.

The investigation is a kind of companion piece to the “Exxon Knew” campaign, which charges that the world’s largest publicly traded oil company was aware of the catastrophic effects of climate change nearly 40 years ago, but lied to shareholders about these risks to its business model. Attorneys general in over a dozen states have opened investigations into these matters.

But the SEC probe goes further. The agency requested documents from PricewaterhouseCoopers, ExxonMobil’s auditor, looking at how the company accounts for future costs from global climate regulations. If it becomes more costly to initiate drilling because of the so-called “price of carbon,” or regulations that mandate reductions to greenhouse gas emissions, Exxon might have to shelve the projects, taking a hit to future profitability. Even if the United States dumps the Paris climate accord (something a Secretary of State Tillerson may be in position to influence), Exxon does business worldwide, including with countries who would be likely to stay in the pact and work to cut emissions. Public companies must account in their financial disclosures for knowable risks to investors, and climate regulations would certainly fit the bill for an oil giant.

The SEC also wants to know why ExxonMobil does not write down the value of its reserves when oil prices drop. The crash began two years ago; a barrel of oil fetched $115 in June 2014, but under $28 by February. Even with the recent announcement of OPEC production cuts, the price has barely crested $50. But ExxonMobil never factored that loss into its calculations of future reserves; by contrast, Chevron has written down $50 billion. Exxon said in October it could “de-book” about 20 percent of its reserves if prices remain low, but it hasn’t done it yet.

Exxon claims that it doesn’t overstate its reserves (which at the end of 2015 totaled 24.8 billion oil-equivalent barrels) and book those values conservatively. “Our financial reporting meets all legal and accounting requirements,” said spokesman Alan Jeffers in September. But if the company was found to be touting phantom future profits, it would surely be committing securities fraud against investors.

The problem is that getting smoking-gun information about often-byzantine oil and gas accounting will prove difficult. And that’s made more difficult if the CEO of ExxonMobil holds a major cabinet position.

The man who wants to appoint him, Trump, will also have the opportunity to remake the SEC. Since his election, seven top officials have announced their resignations, from chair Mary Jo White to Enforcement Division chief Andrew Ceresney to the leader of the section with primary responsibility over reviewing corporate filings, Division of Corporation Finance head Keith Higgins.

This turnover isn’t necessarily a bad thing—the SEC’s record over Obama’s second term has been so weak that liberals have repeatedly demanded mass firings. But Trump will get to appoint three new SEC commissioners (two seats on the five-member panel were already vacant before White’s resignation announcement), and that new executive team will hire the top leadership. So the president-elect could make sure that ExxonMobil has little to fear from the SEC, whether or not Tillerson makes it to Foggy Bottom.

I’d assume that deceiving investors is a résumé-builder for a Trump administration post, and I wouldn’t expect this issue to be a major factor in Tillerson’s confirmation process. But it’s notable nonetheless, especially if it’s true that climate risk has not been properly priced on Wall Street. Trump over the weekend called the free market the dumb market, and here’s a way it’s made dumb, through accounting deception that promises endless fossil-fuel burning without any threat to sustainability.