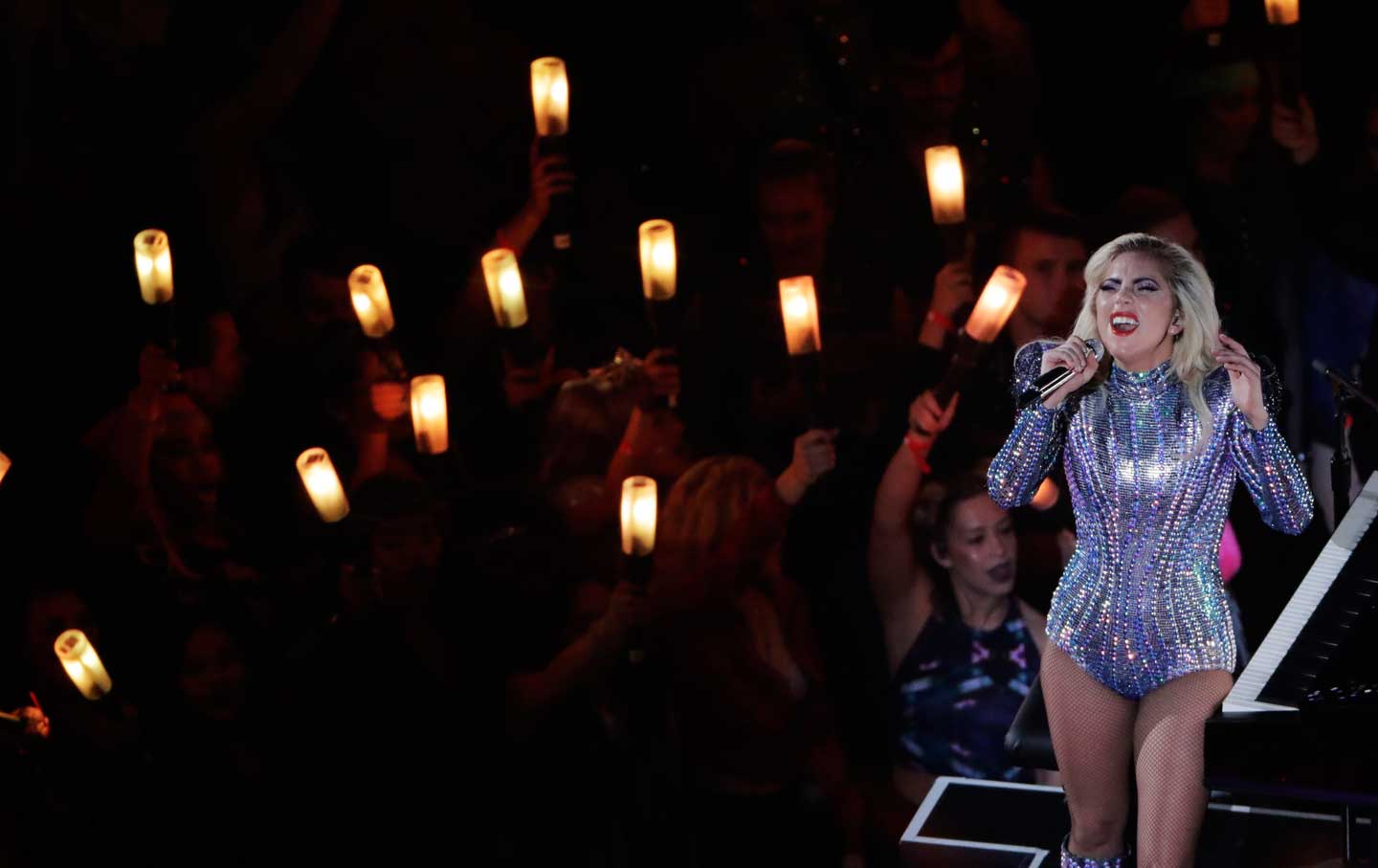 The New England Patriots won the Super Bowl 34-28, in the most gobsmacking, unfathomable comeback in Super Bowl history. Down 28-3, they came all the back to win in overtime. That will mean joy in the White House—as Donald Trump’s favorite team is victorious—and also joy for Patriots tight end Martellus Bennett, who won’t be joining the team upon their inevitable White House visit because of the man inhabiting that space.

It started with the Schuyler Sisters from the musical Hamilton—Phillipa Soo, Renée Elise Goldsberry, and Jasmine Cephas Jones—singing “America the Beautiful“ and adding the word “sisterhood”—as in “crown thy good in brotherhood and sisterhood”—to the lyrics. Given the women’s marches that exploded after the Trump inauguration, given that Vice President Mike Pence was in a VIP box, and given Pence’s own history of being rebuked at the musical Hamilton last November, it was difficult to see the performance as anything but a highly choreographed shot to the solar plexus of this White House. Then Lady Gaga’s halftime performance started with “God Bless America” and then, as if taking a hand-off from Soo, Goldsberry, and Jones, she transitioned to the Woody Guthrie anthem “This Land Is Your Land,” an anthem being sung at protests around the country. There are many who wanted Lady Gaga to be more political, but when you choose a song not only organically connected to present day protests but one with lyrics that include, “As I went walking I saw a sign there / And on the sign it said “No Trespassing.” / But on the other side it didn’t say nothing, / That side was made for you and me,” the significance is unmistakable.

Then she sang her rousing 2011 anthem “Born This Way.” Six years ago, this was a statement against bullying. It is difficult to hear it now as anything but an anthem against the biggest bully of them all. The verses Gaga chose to sing must have given Steve Bannon more heart palpitations than Falcons receiver Mohamed Sanu as she sang,

Don’t be a drag, just be a queen
Whether you’re broke or evergreen
You’re black, white, beige, chola descent
You’re Lebanese, you’re orient
Whether life’s disabilities
Left you outcast, bullied, or teased
Rejoice and love yourself today
‘cause baby you were born this way

This is what happened on the field. The commercials attempted to capture this mood as well, from a “proudly feminist” Audi ad to an Anheuser-Busch campaign celebrating the immigration story of the beer company’s founding family, much to the chagrin of online Nazis now calling for a boycott of the brewery. There was even a hair-product commercial that started with the statement, “We are in for four years of bad hair.” This might very well be seen as an effort to “commodify dissent,” but it is stunning that the suits of Madison Avenue—after years of erectile-disfunction and sexist godaddy.com ads—feel something in the air that they yearn to commodify.

This is just what took place around the Super Bowl. Outside the stadium, Houston saw a weekend of protests, culminating in the participation of more than 1,000 people in a Sunday march that stretched over one half a mile. It was for black lives and against the Muslim ban, and decidedly against the aims of this White House. That’s what happens when the Super Bowl is staged in a city that takes in more refugees than anywhere in the United States.

There is no doubt that people who equated a Patriots victory with a victory of sorts for Trump will feel, um, deflated by the turn of events tonight. But the real world is more complicated than that. The Patriots will go home to a city that Trump would not even be able to enter without provoking mass protests, a city that just a week ago had hundreds of people clogging Logan airport to protest the Muslim ban and two weeks ago shut down greater Boston with post-inauguration protests. The fight goes on, and the wind is at our back. The resistance continues, and great comebacks should remind us that nothing is set in stone.