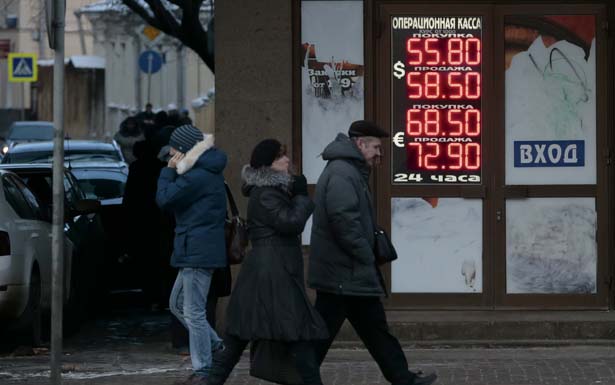 People walk in front of an exchange office in Moscow on December 29, 2014. (AP Photo/Ivan Sekretarev)

A financial crisis strikes Russia—the value of the ruble plummets; big companies are under siege; families fear loss of their savings; and commentators predict an uncertain future for the regime. But is it 2014, 2008 or 1998? Today we are witnessing the third episode of economic crisis in post-Soviet Russia. Each time the crisis barged into Russia from beyond its borders, carrying a significant threat to the regime, which nevertheless survived the first two times. Will this one be any different?

In 1998, declining oil prices and a financial crisis in Asia sent foreign capital fleeing the country, causing the state to default on its huge foreign debt and pushing the major banks into insolvency. A weakened President Yeltsin was forced to name an opponent, Yevgeny Primakov, as prime minister and Communists to high-level cabinet positions. However, eight months later the crisis passed, Yeltsin recovered, and Primakov and his cabinet were unceremoniously fired.

Ten years later, the 2008 financial crisis and Great Recession sent demand for Russia’s exports plunging. Russia’s GDP fell by 7.8 percent in 2009, the largest decline of any major country at the time. Having learned from the 1998 crisis, Russia had accumulated hard currency reserves of almost $600 billion from years of huge oil export revenues. The state used the reserves to bail out the big companies and banks controlled by Russia’s oligarchs, which had borrowed heavily abroad and accumulated a foreign debt of over $300 billion by June 2008. In 2010, oil prices recovered and the crisis passed.

Once again Russia is buffeted by a crisis stemming from events outside its borders. Western sanctions over Russia’s role in Ukraine have combined with sharply falling oil prices to drive the ruble down and undermine faith in Russia’s financial system. On December 17, the ruble briefly hit eighty to the US dollar, a decline in value of nearly half from that of two months earlier, before stabilizing in the mid-fifties a few days later. This time, instead of bailing out companies and banks, it has been reported that the government is forcing them to spend as much as $1 billion per day of their foreign currency earnings to prop up the ruble. This reflects the supremacy of Putin’s presidential office over the private-sector oligarchs, reversing the relation from the Yeltsin era.

The current crisis, like the two before it, demonstrates the peril facing any petrostate, which is always vulnerable to events outside its control. Oil and gas revenues bring about 60 percent of Russia’s export revenues and fund an estimated 50 percent of its federal budget. Western commentators often criticize Russia for its oil export dependence, which shows a failure of historical memory. It was the post-Soviet Russian regime’s slavish following of the neoliberal “shock therapy” policies urged by the IMF and US Treasury Department that transformed Russia’s economy from the diversified industrial economy inherited from the Soviet period into a giant-size version of Kuwait, but with some 145 million people, a big army and nuclear weapons.

Since 1992, every Russian leader has promised to diversify the economy. However, despite state seizure of some key strategic industries in the Putin era, the state has not used its economic leverage to move away from the petrostate economy. One study found the sales of the top 100 Russian companies outside the oil and gas sector mirror almost exactly the movements in global oil prices. Both oligarchs and political officials have been unwilling to give up the huge riches flowing into their pockets from oil and other mineral exports, a sacrifice that would be required if Russia’s energy resources instead were devoted to developing the economy.

Yet today’s crisis might finally provoke a shift. By early January, oil prices had fallen by over 50 percent since June to below $50 a barrel, under the impact of growing supply due to US fracking and declining demand from a slowdown in China’s resource-hungry GDP growth and recession in Europe. Western sanctions have intensified the impact. If this turns out to be a temporary dip in the price of oil, no serious consequences are likely to follow.

However, if oil prices remain low for some time, Russia’s economic elite would face an end to the oil-export bonanza, and the political elite would face growing pressure from the West to capitulate to its demands over Ukraine. This would pose a serious threat to the stability of the regime. A fight over who gets declining energy revenues might fracture the economic elite. Economic stagnation and shrinking state financial resources available for distribution to the population would undermine public support for the government.

This would open the possibility of political and economic change in Russia. Under such conditions, three different directions of change seem possible. First, if Russia’s elite sees no future in the existing relation to global capitalism, it might seek to reproduce the current energy-export model, along with the flow of riches to the elite that goes along with it, through a deepened relation to China. Russia’s natural resources would be paired with China’s growing industrial prowess and huge appetite for raw materials in a combination that might develop into a serious rival to the US-dominated global system of today. However, it is not clear that China would agree to such an arrangement, given its lucrative insertion in the US-dominated global system.

A second possibility would be a major transformation of Russia’s economy through adoption of a developmental state model. Russia still has the potential to gradually develop a series of advanced industries, relying on its well-educated population and its still-strong scientific resources. This would require that Russia’s natural resources be devoted to development of the economy instead of enrichment of the elite. Such models have arisen in various countries, such as Japan in the late nineteenth century, South Korea in the 1950s and China since 1978. Each time some group has taken power that has disciplined the developing capitalist class, compelling it to follow the national development program rather than its own short-run enrichment. If President Putin’s circle, or a part of it, decides that this is its best option, such a path might emerge in Russia, given Putin’s domination of Russia’s elite.

Third would be a more radical departure from the current model, one directed at the needs of the majority in Russia through a revival of the project of building a democratic form of socialism begun under Mikhail Gorbachev and aborted when Yeltsin seized power in 1991. Most of Russia’s population is still materially worse off than they were at the end of the Soviet period, and despite the deformations of Soviet state socialism, some positive associations with the concept of socialism remain among the population. A serious prospect of a socialist future for Russia would require the rise of a mass movement demanding such a direction of change, along with a political party that could lead such a movement.

Today, the Communist Party of the Russian Federation remains the only large party on the left, and there is no sign that its leadership seeks to go beyond the comfortable role of loyal opposition to the current regime. A vibrant democratic left movement exists in Russia, but it is not a major political force. With no mass movement on the horizon and no political party currently able to lead such a movement, this third direction of change seems unlikely in the near future, although there is a history of unanticipated mass-based radical change springing up in various times and places, not least in Russia in 1917.