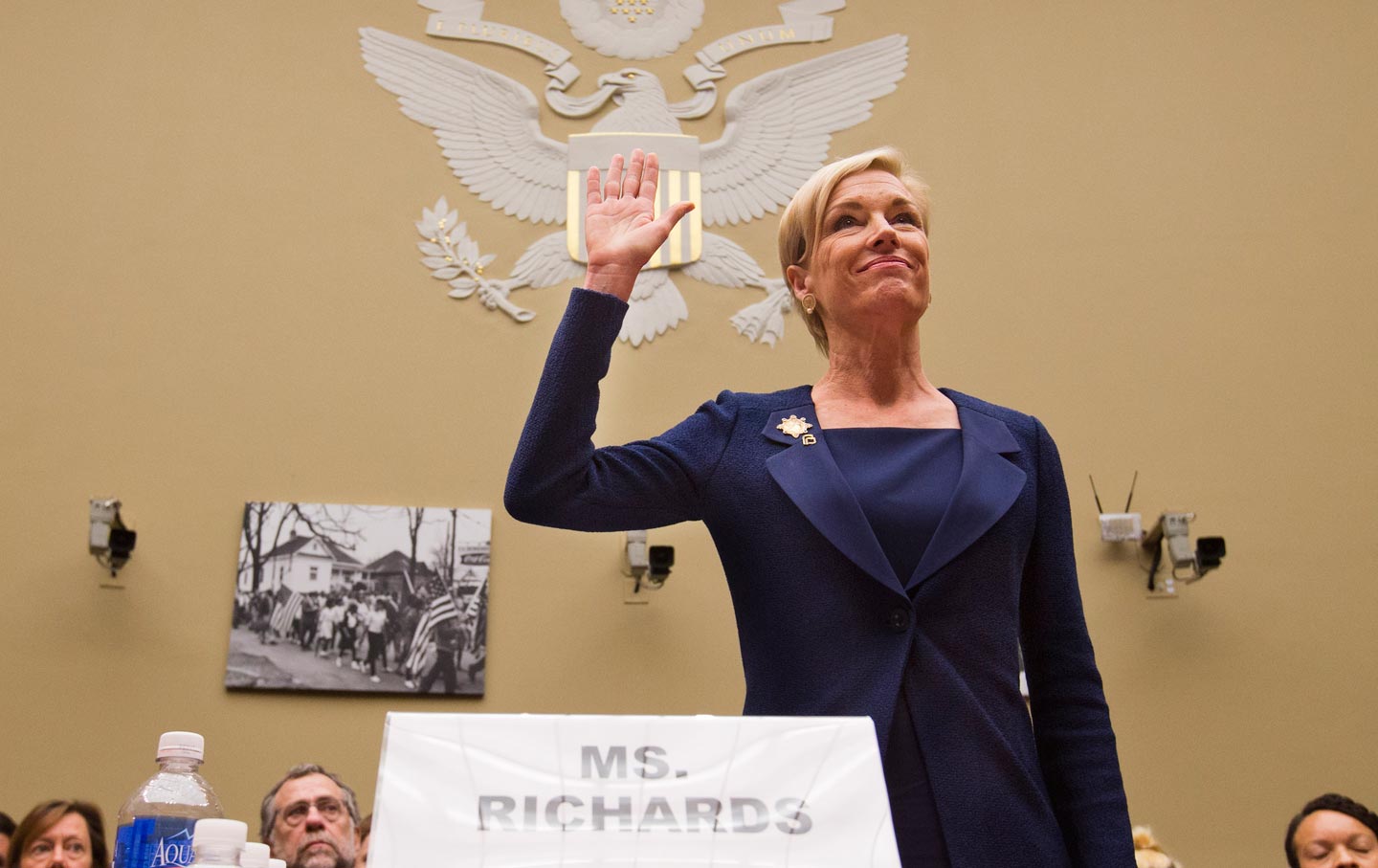 Since July, when an anti-abortion group calling itself the Center for Medical Progress released the first in a series of heavily edited smear videos that purported to show Planned Parenthood officials haggling over fetal organs, Planned Parenthood has spent much of its time fending off political attacks. Eighteen states launched investigations into the allegations of illegal fetal-tissue sales, as did a number of congressional committees. (To date, none have found evidence of illegal activity on the part of Planned Parenthood.) Lawmakers used the videos as an excuse to try to cut off federal funds. Employees featured in the videos received death threats, had their homes picketed by anti-abortion protesters, and even had to go into hiding. Threats against abortion providers more generally rose to “alarming” levels. In November, four people were killed at a Planned Parenthood facility in Colorado Springs by a gunman who raved about “baby parts.”

Planned Parenthood's 65-page complaint accuses the group of racketeering, fraud, and a variety of other charges.

The whole mess has also cost Planned Parenthood millions of dollars—so the organization claims in a major lawsuit filed Thursday against CMP and affiliated individuals. The 65-page complaint accuses the group of racketeering, fraud, and a variety of other charges. It seeks compensation for financial losses due to the videos and the public backlash, as well as other damages. Although Planned Parenthood has sued a handful of states that sought to revoke public funding in the wake of the videos, this is the first legal challenge the organization has made directly to the makers of the videos. Planned Parenthood waited months to file the suit because it was a “very complex conspiracy,” according to Executive Vice President Dawn Laguens, who spoke with reporters Thursday. “It really has taken some time to investigate the network of people who perpetrated this fraud and the multiple laws that they broke in the process.”

The complaint describes “a complex criminal enterprise conceived and executed by anti-abortion extremists,” who posed as employees at a fake tissue-procurement company, going so far as identity theft and credit-card fraud, Planned Parenthood alleges. They crafted their plan in Wichita, in the office of anti-abortion activist (and Ted Cruz endorser) Troy Newman. The complaint quotes Newman’s description of their plotting: “we began discussing all of the various techniques that he [Daniel Daleiden, founder of CMP] would have to use in order to infiltrate Planned Parenthood…. Alternate identities had to be set up. Alternate companies had to be set up.” David Daleiden allegedly created a fake California driver’s license under the name “Robert Sarkis,” and someone involved in the scheme adopted the identity of one of his high school classmates—a real person, who is in fact pro-choice. Disguised as representatives of BioMax, a fake company, the activists made connections with Planned Parenthood staff at conferences in California, Florida, and Maryland, and then “peppered” them with requests for meetings, which were surreptitiously recorded.

They crafted their plan in Wichita, in the office of anti-abortion activist and Ted Cruz endorser Troy Newman.

“The content of these videos was wrongfully and illegally obtained,” Planned Parenthood alleges in the complaint. “Moreover, according to expert forensic analysis, Defendants’ heavily edited short videos and transcripts do not present a complete or accurate record of the events they purport to depict. Rather, the heavily edited short videos ‘significantly distort and misrepresent the conversations depicted.’”

Why Planned Parenthood Shouldn’t Be on the Defensive

The complaint accuses the Center for Medical Progress, along with Daleiden, Newman, and several other individuals, of violating the Racketeer Influenced and Corrupt Organizations Act; of illegal secret taping; tax and other types of fraud; as well as violations of other state laws. The suit was filed in California because the defendants “set their tortious conspiracy in motion…when they came to San Francisco in April 2014 to fraudulently gain admittance to the [National Abortion Federation]’s annual meeting,” the lawsuit contends. Several of the defendants have been affiliated with anti-abortion groups that have supported harassment and violence towards abortion providers, including Newman, president of the group Operation Rescue, which has a history of making secret recordings of doctors, and once claimed that the murder of a provider was a “justifiable defensive action.”

CMP is expected to defend itself on free-speech grounds. In a statement released Thursday, the group referred to the new complaint as a “frivolous lawsuit in retaliation for CMP’s First Amendment investigative journalism that has done nothing more than tell the truth about Planned Parenthood’s lawless operations.” But, as Michelle Goldberg points out, the level of fraud CMP allegedly conducted goes way beyond anything sanctioned for the purposes of undercover reporting. Furthermore, CMP’s claim to have exposed “lawlessness” has not been borne out so far by any other investigation.

The case will last at least 18 months, an attorney for Planned Parenthood told reporters, though it could be far longer. In the meantime, the healthcare provider will bear the burden of protecting its patients and employees from harassment, and defending itself from political attacks. This week Kansas Governor Sam Brownback ordered state officials to stop reimbursing Planned Parenthood for services provided to patients on Medicaid, claiming that the group is “trafficking of baby body parts.” Brownback made no mention of the fact that a state medical board that he appointed had cleared the organization of wrongdoing just five days earlier.