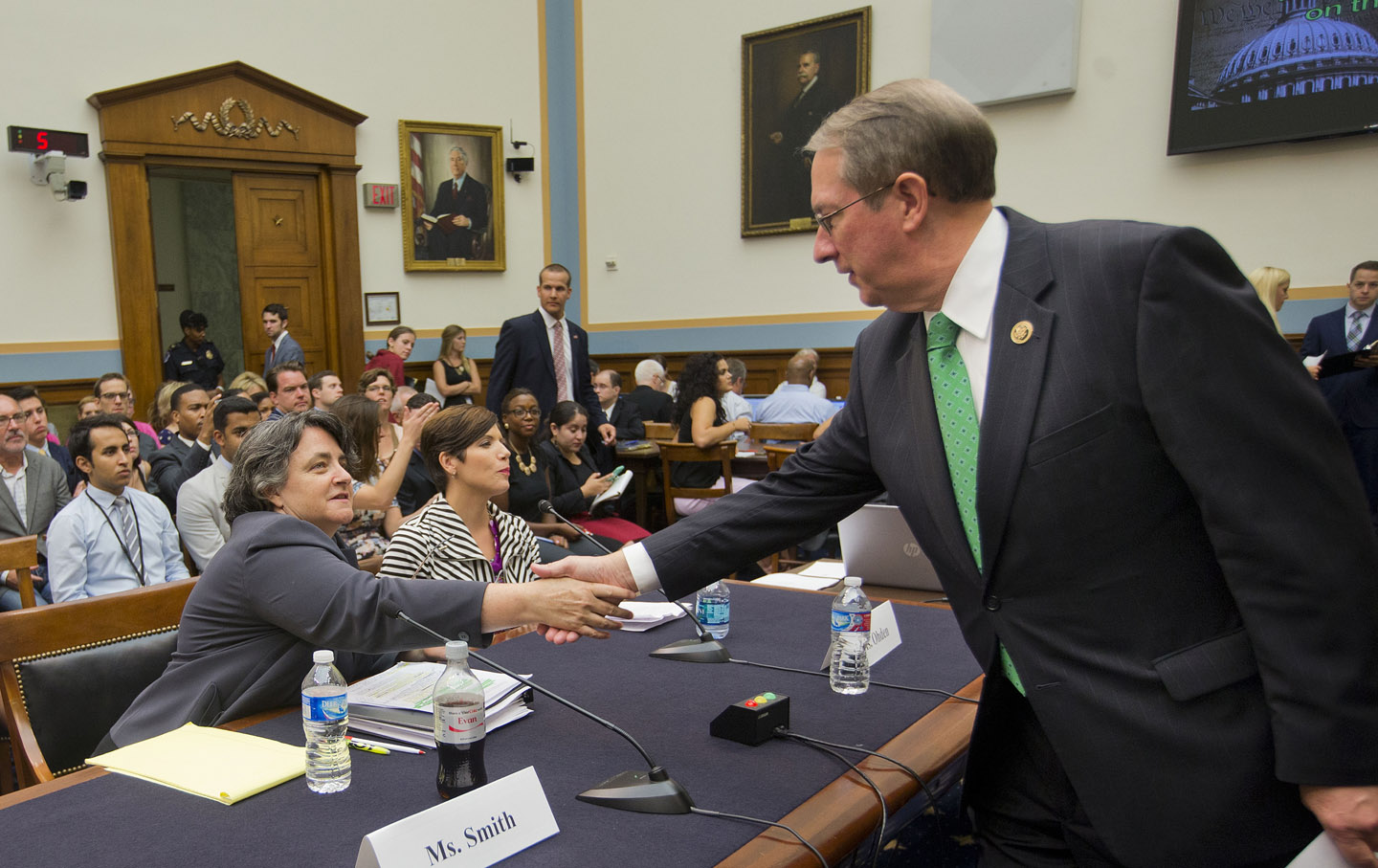 On Wednesday, the House Judiciary Committee held the first of several congressional hearings sparked by undercover videos purporting to show that Planned Parenthood profits from illegal sales of fetal tissue. Less than 40 minutes had elapsed by the time someone quoted Adolf Hitler. The hysteria lasted for nearly four hours, marked by claims that abortion providers start their day with a “shopping list” of body parts to procure, about a fetus’s face being cut open with scissors, about fetuses who “cried and screamed as they died” but weren’t heard “because it was amniotic fluid going over their vocal cords instead of air.”

Less than forty minutes of the Planned Parenthood hearing had elapsed by the time someone quoted Adolf Hitler.

The hearing was engineered to repulse and horrify; it was not designed to reveal any credible information about Planned Parenthood or the Center for Medical Progress, the antiabortion group that made and edited the undercover videos. Neither Planned Parenthood nor CMP were asked to make representatives available to testify. Instead, Republicans called on two “abortion survivors” who lived after their mothers attempted to terminate their pregnancies, and issued emotional appeals against abortion, broadly. They also invited James Bopp, the Indiana lawyer who argued on behalf of the nonprofit Citizens United in the Supreme Court case that extended 1st Amendment rights to corporations. Among other things, Bopp argued in his testimony that fetal tissue donation encourages women “to choose abortions as an acceptable form of birth control.” Priscilla Smith, who directs the Program for the Study of Reproductive Justice at Yale Law School, was the only witness who supported abortion rights.

Representative Trent Franks, the Republican chairman of the Constitution and Civil Justice Subcommittee, was particularly unhinged in his attacks, appearing to work himself nearly to tears as he described the videos that “irrefutably reveal” Planned Parenthood officials “haggling” over fetal tissue. Later, Franks was pressed on whether he’d actually seen full, unedited footage from CMP. After erroneously claiming that CMP had made it available online, Franks admitted that neither he nor anyone else from the GOP majority had seen the footage in its complete form. He also confirmed that committee Republicans haven’t asked for it.

Democrats were quick to point out the absurdity of holding a hearing about accusations based on film footage that no one on the committee has seen in its original form. Representative John Conyers, the ranking Democrat on the committee, called the hearing “one-sided” and said that the videos revealed “no credible evidence that Planned Parenthood violated the law.” Representative Steve Cohen called it “the Benghazi of health care hearings.” Representative Hank Johnson likened the proceedings to a “third world show trial.” “Senator Joseph McCarthy would be proud of this committee today,” remarked Representative Jerrold Nadler.

TELL CONGRESS: NO SHUTDOWNS, NO CUTS TO PLANNED PARENTHOOD

The hearing is part of a broader push to cut off federal funding for Planned Parenthood, which receives about $500 million a year. (Under the Hyde Amendment, none of that money can be used for abortions, except in rare cases.) Conservatives are hoping to ride the momentum from the undercover videos to force the issue during budget negotiations, potentially leading to a government shutdown at the end of the month. “The horrifying thing about this hearing,” Smith said in her testimony, “is the mismatch between the allegations and concerns here about abortion [and] about fetal tissue research, and what is being considered, which is defunding Planned Parenthood’s non-abortion-related services.”

"Senator Joseph McCarthy would be proud of this committee today."

Perhaps the most ridiculous line of questioning came from Republican Jim Sensenbrenner, who wanted to know “why Planned Parenthood needs to get over half a billion dollars of federal funding every year when there are other pressing needs, such as feeding hungry children, that maybe we should be putting that money into?” Here’s how much Sensenbrenner cares about hungry children: In 2013, he and 216 of his fellow Republicans voted for a $39 billion cut to the food-stamp program.

In a memo released in advance of the hearing, Planned Parenthood pointed out that this is the 10th time since 2000 that secretly recorded videos and other accusations against the organization have led to congressional investigations. The evidence has never held up. But as Michelle Goldberg explained here, the latest videos—and witnesses like the two “abortion survivors” who testified on Wednesday—have a powerful visceral impact, despite their lack of grounding in fact. Republican Representative Steve King explained during Wednesday’s proceedings, “I don’t need an investigation to know what’s going on here.”