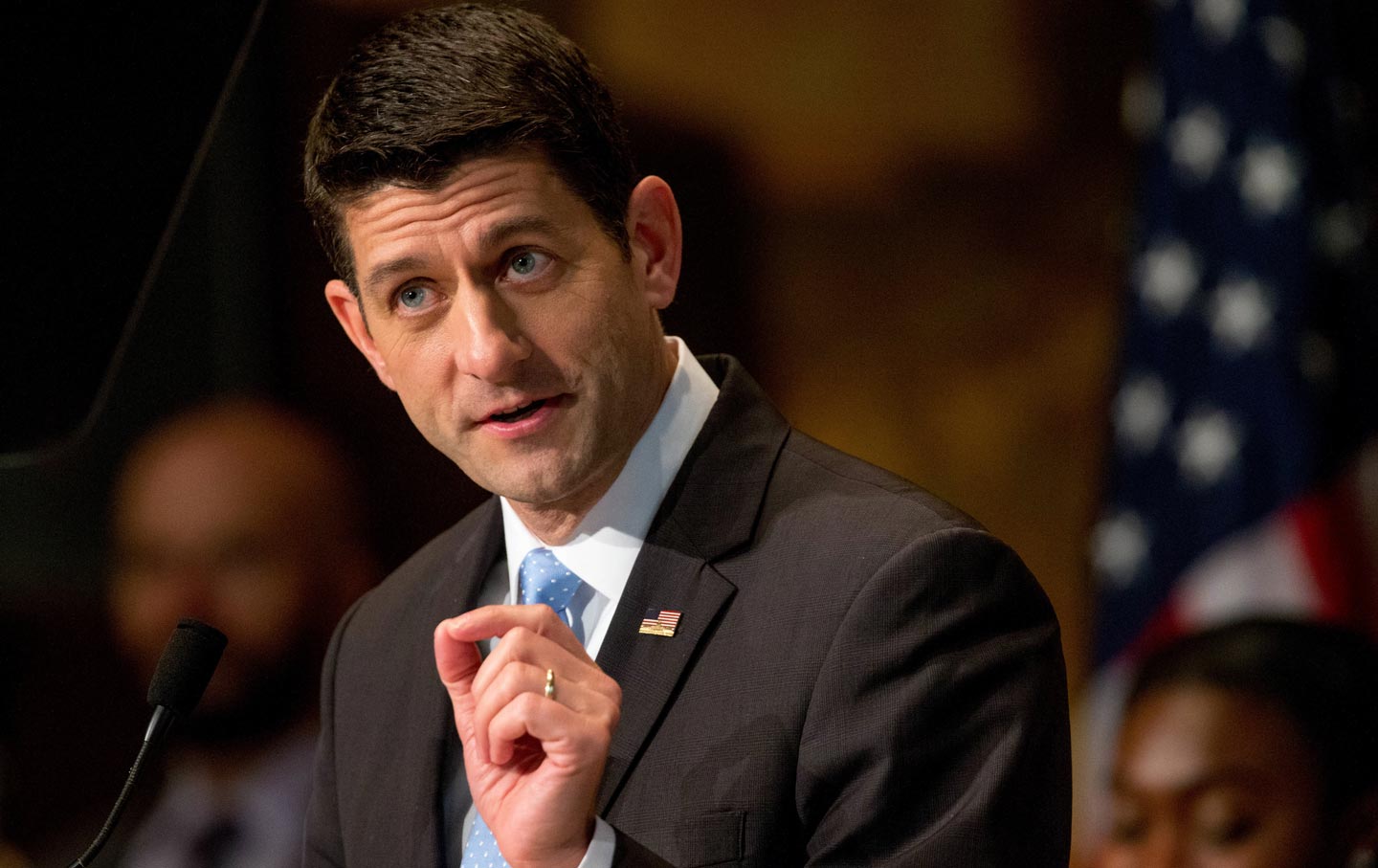 Career politicians are frequently accused of talking out of both sides of their mouths. In order to avoid the blowback that might come from taking a side, the most calculating politicians try to say things that sound responsible—even bold—while leaving themselves wiggle room to do that which they know to be irresponsible.

Want an example? Check out House Speaker Paul Ryan’s dance with Donald Trump. Ryan says he is “not ready” to formally endorse Trump’s unpopular presidential candidacy. Trump says he is “not ready” to embrace Ryan’s unpopular austerity agenda. But after speaking with Ryan, Republican National Committee chairman Reince Priebus says the speaker is prepared to “work through” these differences in order to “get there” on an endorsement of the billionaire. Blah. Blah. Blah.

Ryan is being portrayed in much of the media as an honorable Republican who is courageously refusing to board the Trump train. In reality, Ryan’s maneuvering has very little to do with honor and courage, and very much to do with ego and political positioning.

Paul Ryan is not ready to let go of his status as the GOP’s “golden boy.”

Trump may be the “presumptive nominee” of the Grand Old Party. But Ryan is not ready to let go of his status as the GOP’s “golden boy”—the still relatively young speaker of the House who has already done a turn as the party’s vice-presidential nominee and who might yet be a presidential prospect.

Trump has disrupted Ryan’s trajectory at the national level. And the billionaire’s also becoming something of a hometown frustration for the speaker.

Ryan is running this year for reelection to the US House seat that has always been his base of power. And he’s facing a lot more opposition than he is used to—inside his own Republican Party and beyond its boundaries.

The House Speaker’s Republican primary contest with a local businessman is highlighting the differences between the party’s grassroots base and an establishment that Ryan has come to represent: as a supporter of Wall Street bailouts, free-trade deals, and austerity schemes that invariably benefit his campaign donors, while hammering his constituents. Even as Ted Cruz was winning Wisconsin’s April primary, Ryan’s neighbors in economically hard-hit Rock County voted for Trump. (Wealthier sections of the southeastern Wisconsin district were friendlier to Cruz, tipping it to the Texan; but there is plenty of ferment in a district where the mention of Ryan’s name at a Trump rally in the congressman’s hometown of Janesville inspired robust booing.)

Ryan does appear to know his place: as a political careerist whose first priority is to maintain his own viability.

Ryan’s primary problems have attracted national attention in recent days, as 2008 Republican vice presidential nominee Sarah Palin has endorsed the 2012 Republican vice-presidential nominee’s Republican challenger, Paul Nehlen. Palin won’t be swinging any Wisconsin contests on her own—she’s never been particularly popular in the state—but she has an eye for races where the tribunes of the Republican establishment might be vulnerable. And Nehlen has played his card, jumping at the chance to announce that he would back Trump as the nominee.

The general election is another problem altogether for Ryan. Though the district is gerrymandered to favor the Republican, it can swing toward the Democrats in presidential years. (Indeed, Ryan ran worse than any Republican congressional contender in 2012.) And Trump polls poorly as a November contender in Wisconsin: trailing far behind Hillary Clinton and even father behind Bernie Sanders.

So what’s an ambitious politician to do with a presumptive nominee who has exposed the Republican Party’s taste for xenophobia, misogyny, and racially insensitive rhetoric?

If Ryan was a responsible Republican, he would simply reject Trump—absolutely and unequivocally. Wisconsin Republican Congressman Reid Ribble has done that, declaring, “I will not support Donald Trump for president of the United States, no matter what the circumstances.”

But Ryan has always refused to reject Trump. Even when he has had differences with the billionaire, the speaker has repeatedly signaled his intention to support the party’s nominee. And despite the media frenzy of the moment, Ryan is still erring in that direction. But he doesn’t want to look too enthusiastic, for reasons of national and local partisanship.

So last week Ryan was peddling his “not ready” to back Trump line. Trump was pushing back with his “not ready to support Speaker Ryan’s agenda.” The media imagined the back-and-forth as a “dramatic” dispute between a pair of preening Republicans.

But this isn’t really a dispute. This is a dance.

The speaker has to worry a little bit about his home-state primary and general elections—and a lot about his future as the party’s younger statesman.

Trump recognizes the dynamic, and he is pushing back—trying to make sure that Ryan knows his place.

There is some evidence to suggest that Ryan does, in fact, know his place: as a political careerist whose first priority is to maintain his own viability.

That’s why, instead of standing on principle, Ryan used the “not ready” dodge. This is not an explicit rejection of the presumptive nominee; this a negotiating position. How do we know? Ryan says he “wants to” back Trump and has indicated that he hopes “to be a part of this unifying process.”

That’s why Ryan and Trump plan to meet this week in Washington. They’ll stir up a little more drama. But don’t be surprised if they eventually achieve a resolution that is politically satisfying to all concerned.

Paul Ryan does not have a “dramatic” disagreement with Donald Trump. Paul Ryan is a career politician who is talking out of both sides of his mouth. He not quite “ready” to dance to Trump’s tune, but he says he “hopes” they will be dancing together soon. And what he absolutely does not say is that Donald Trump is an absolutely unacceptable contender for the presidency of the United States.