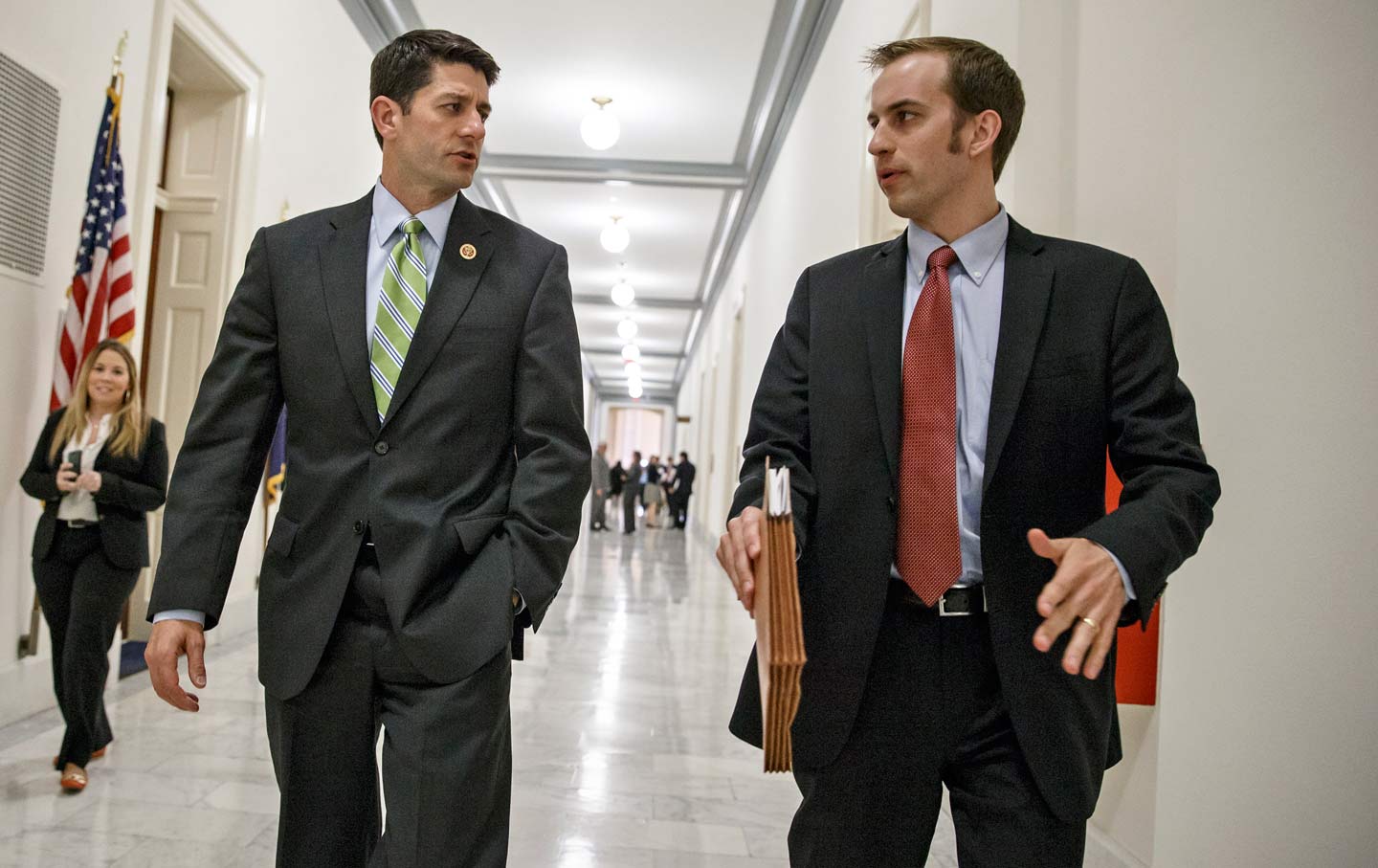 The last of the young guns is riding to the rescue.

After declaring repeatedly that he was “not interested” in filling the void created by the decision of House Speaker John Boehner to quit—in the face of a threatened vote to remove him—Paul Ryan now says he will deign to accept the speakership.

He has asked that the job be handed to him on a silver platter. And with willing acquiescence from the mainstream conservative Tuesday Group and the more conservative Republican Study Group, as well as grudging support from the often uncompromisingly-conservative Freedom Caucus, the platter is prepared.

It is now all but certain that Ryan will be the the next Speaker of the House. Typically for Ryan, he is securing the job with regal flourishes more frequently seen in corporate suites than the Capitol. The congressman has not just demanded that the many caucuses and factions into which House Republicans group themselves agree to give him unwavering support. He has created a new set of requirements for House Republicans, and warned them not to push back. (Ryan is even asking that his fellow Republicans recognize his need for defined and respected family time, which we should all hope he gets as part of a broader Republican pivot toward support of family-and-medical-leave laws and the initiatives by trade unions to negotiate better deals for working moms and dads.)

“I hope it doesn’t sound conditional—but it is,” Ryan says of his my-way-or-no-way approach.

“I hope it doesn’t sound conditional–but it is." –Paul Ryan on his demands

What makes the House Ways and Means Committee chairman so sure of the necessity of his leadership at “a very dire moment, not just for Congress, not just for the Republican Party, but for our country”?

Ryan has always positioned himself as a leader with star power for a party where that commodity has been in short supply. Back in 2010, the Wisconsin congressman co-authored the book Young Guns: A New Generation of Conservative Leaders. Politico described the tome as “a 224-page marketing tool for the men who hope to run the House.”

Several months after the publication of Young Guns, Ryan and his fellow writers—Virginia Congressman Eric Cantor and California Congressman Kevin McCarthy—were for all practical purposes running the House. While a hapless Ohioan, Boehner, was installed in the thankless speakership, the young guns took charge of framing party messages, strategies and policies.

Ryan took charge of the budget committee and began framing out schemes to balance budgets with assaults on Social Security, Medicare, and Medicaid.

Five years later, Boehner is quitting, not on his own terms but on those of a “Freedom Caucus” that has divided the broader House Republican Caucus on the question of whether to govern at all or to simply to cry “no.”

Cantor is out, having been rejected by grassroots Republicans in his Virginia district. His 2014 primary defeat at the hands of an anti-compromise conservative named Dave Brat was so severe that Cantor quit before finishing his last term.

McCarthy has been cast aside, having been rejected by a sufficient number of House Republican Caucus members to thwart his bid to replace Boehner. Making matters dramatically worse is the widespread sense that McCarthy defeated himself with a broadcast acknowledgement of the hyper-partisan frenzy that has overwhelmed his caucus: “Everybody thought Hillary Clinton was unbeatable. But we put together a Benghazi special committee, a select committee. What are her numbers today? Her numbers are dropping.”

So Republicans are left with Ryan—the one young gun who has yet to be rejected.

Voters rejected Paul Ryan to be number one in the line of presidential succession. Now, he wants to be number two.

At least that’s how Ryan supporters and much of the media portrays the circumstance of a Republican royalist who is asking his party to help him saddle up and play cowboy.

There’s just one flaw in that story line.

Ryan’s addition to Mitt Romney’s 2012 Republican ticket in 2012 was hailed by his fellow partisans as a masterstroke, which would unite the party and excite crossover voters. Yet Ryan’s acceptance speech at the Republican National Convention was a fact-checking disaster that saw his outrageous claims called out even before he finished the address. His debate with Vice President Joe Biden was a turning point in the fall campaign, where Biden literally led the nation in laughing at Ryan’s schemes to rewrite tax laws in order to make the already-wealthy dramatically wealthier. Instead of strengthening the GOP ticket, Ryan became a burden.

There is no question that The Washington Post was right when it observed that the selection of Ryan set up a “stark choice” for voters. The Wisconsin congressman’s stances were clearer and more detailed than those of Romney; in many senses, it was the selection of Ryan that clarified the contest for America.

But that clarity did not benefit the ticket on which Ryan ran.

When the votes were counted, the Obama-Biden ticket won a striking victory. The ticket on which Ryan ran secured only an ironic 47 percent of the vote, losing the popular vote by 5 million and losing an Electoral College division that gave the Republicans just 206 votes to 332 for the Democrats.

The Obama-Biden ticket was the first Democratic team to win more than 50 percent of the popular vote in a reelection run since the days of Franklin Delano Roosevelt.

Yes, of course, Romney was rejected. But Romney accepted that rejection. He is not seeking the presidency in 2016, despite serious encouragement from the same party establishment that is enthusiastic about Ryan.

But it is not as if the American people somehow rejected Romney and embraced Ryan in 2012. Ryan, too, was rejected—not just nationally but at home too. The Romney-Ryan ticket lost Ryan’s home state of Wisconsin, which the congressman was supposedly going to secure for the GOP. It also lost Ryan’s hometown of Janesville. It even lost Ryan’s home precinct.

Only hyper-partisan gerrymandering by Wisconsin Governor Scott Walker and his legislative allies prevented Ryan from losing his House seat.

Ryan came out of the 2012 race as a wounded young gun. He wisely eschewed a 2016 presidential run, dismissed talk of leadership bids, and focused on committee work. Now, however, he is prepared to ride again as the last of the young guns. Republicans appear to be prepared to imagine that Ryan has what it takes to lead the House and to stand second-in-line for the presidency.

There is no evidence, however, that this prospect is welcomed by the American people or even the voters who know Ryan best. Voters were offered an opportunity to put Paul Ryan in a leadership position. They said, “No, thanks.”