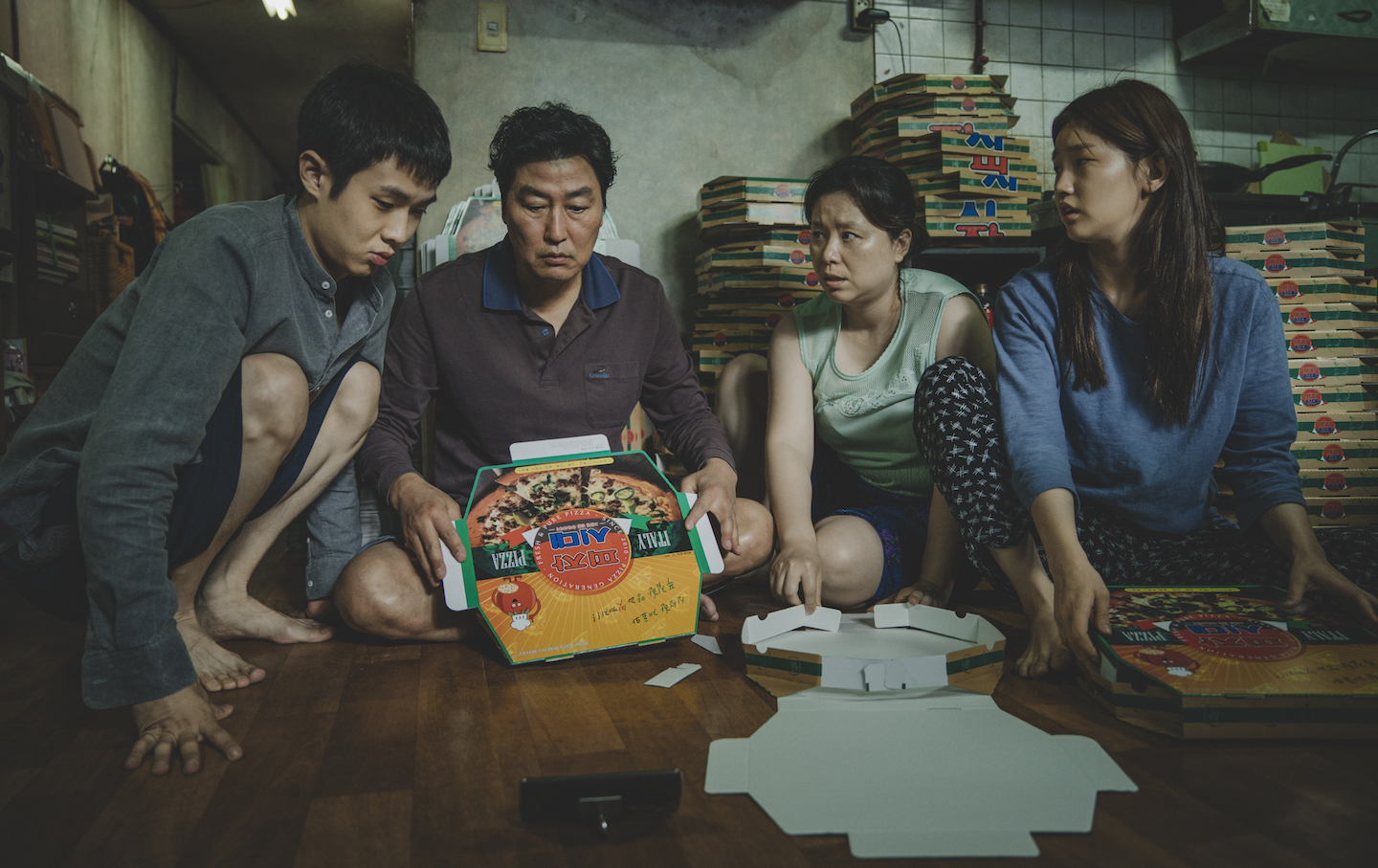 The South Korean filmmaker Bong Joon-ho has called his latest movie Parasite, which won this year’s Palme d’Or at the Cannes Film Festival, a “sad comedy.” It’s an imperfect label, though Parasite did make me laugh, sometimes hysterically. It also made me feel low—miserable, even—but probably not for the reasons Bong intended.

The plot centers on two nuclear families in Seoul, one poor and one rich, one downstairs and one upstairs. Ki-taek, the patriarch of the lower-class Kim family (played by the formidable South Korean actor Song Kang-ho), lives with his wife, Chung-sook; and adult son and daughter, Ki-woo and Ki-jung, in a half-basement apartment redolent of sewage and thick, hand-washed socks that refuse to dry. (“Ki”/“gi” is also the first syllable of the film’s Korean title, “Gisaengchung,” or Parasite.) Their neighborhood is of the old, scrappy South Korean style, cramped and low to the ground, a tenement in the shadow of the city’s cookie-cutter apartment towers. Ki-taek is an unemployed taxi driver, Chung-sook is a washed-up hammer-throw champion, and the two children failed the university entrance exam. They take in sundry piecework, like folding pizza boxes, to survive while on the lookout for a way up.

One night, Ki-woo’s friend stops by to ask a favor. He’s leaving to study abroad and needs someone trustworthy to take over his tutoring gig in a tony household. Ki-woo agrees and is soon at the Park family’s Glass House–style mansion, fake academic credentials in hand. He is received by Moon-gwang, the Parks’ live-in domestic worker (played by the prolific comic actress Lee Jung-eun), and introduced to most of the family: Yeon-kyo, a neurotic but well-meaning stay-at-home mom; daughter Da-hye, a horny high school sophomore and Ki-woo’s student-to-be; and Da-song, a rambunctious young boy. The father, Nathan, an IT executive, is at the office, per usual, working typically punishing hours. (South Koreans log an average of more than 2,000 hours per year, compared with the OECD average of 1,700 hours.) The Parks, though, are not from the old-money chaebol class (the dynasties that own megaconglomerates like Samsung and Hyundai) but from nouveau riche obsessed with English and with Western luxury goods.

Ki-woo gets the job and a new American sobriquet, Kevin—Yeon-kyo’s idea. He’s paid lavishly for his first tutoring session and glimpses a world of opportunity in the envelope she hands him, stuffed with pristine 50,000-won (about $42) notes. What if his sister, father, and mother could work for the Park household, too? Ki-woo devises an extensive con and, soon enough, persuades the Park family to hire his sister as an art tutor and therapist to Da-song, his mother to replace the faithful Moon-gwang, and his father to assume the role of chauffeur to Nathan. All goes well until this family of hangers-on discovers and is discovered by a competing family of parasites. The inevitable face-off begins in the mansion’s subbasement, under the clueless Parks’ feet, and culminates in a masterfully bloody, baroque finale that implicates everyone in the house. Bong’s message seems to be that there are consequences to our obscene division of wealth and labor. In his account, though, it’s inevitable that the parasites will bleed most.

Parasite is a marvelously tense, propulsive film of sharp angles, smells, and cold light. Bong, a talented cartoonist, is known for his obsessive storyboarding, and Parasite, like his previous films, deploys the grotesque, hyperbolic elements of a comic strip in service of social commentary. Many critics have praised the film for its stylized critique of capitalism: As No Cut News, a left-wing South Korean outlet, put it, the movie asks, “Why do the rich only get richer and the poor, poorer?”

This, I think, gives Bong too much credit. He wants to poke fun at the wealthy and lightly satirize our social divides, in the tradition of Luis Buñuel’s The Discreet Charm of the Bourgeoisie. But that’s as far as he’s willing to go.

In interviews, Bong has described Parasite as an allegory of polarization: The two families, rich and poor, should exist on an even plane as human beings in the same metropolis, but assume the roles of titular parasite and host (the title of his 2006 science fiction hit). Nathan repeatedly opines that a good servant is one who “doesn’t cross the line,” who doesn’t become too intimate with or demand too much from his employers. This is untenable and a problem for the rich, Bong said on France Inter radio’s L’heure Bleue. “If you’re so concerned with boundaries, then you should do [the work] yourself,” he said—yet the moneyed would rather outsource this labor. “You can’t maintain your own castle. So you let in a tutor for the kids, a housemaid, a driver, and they cross the line.” 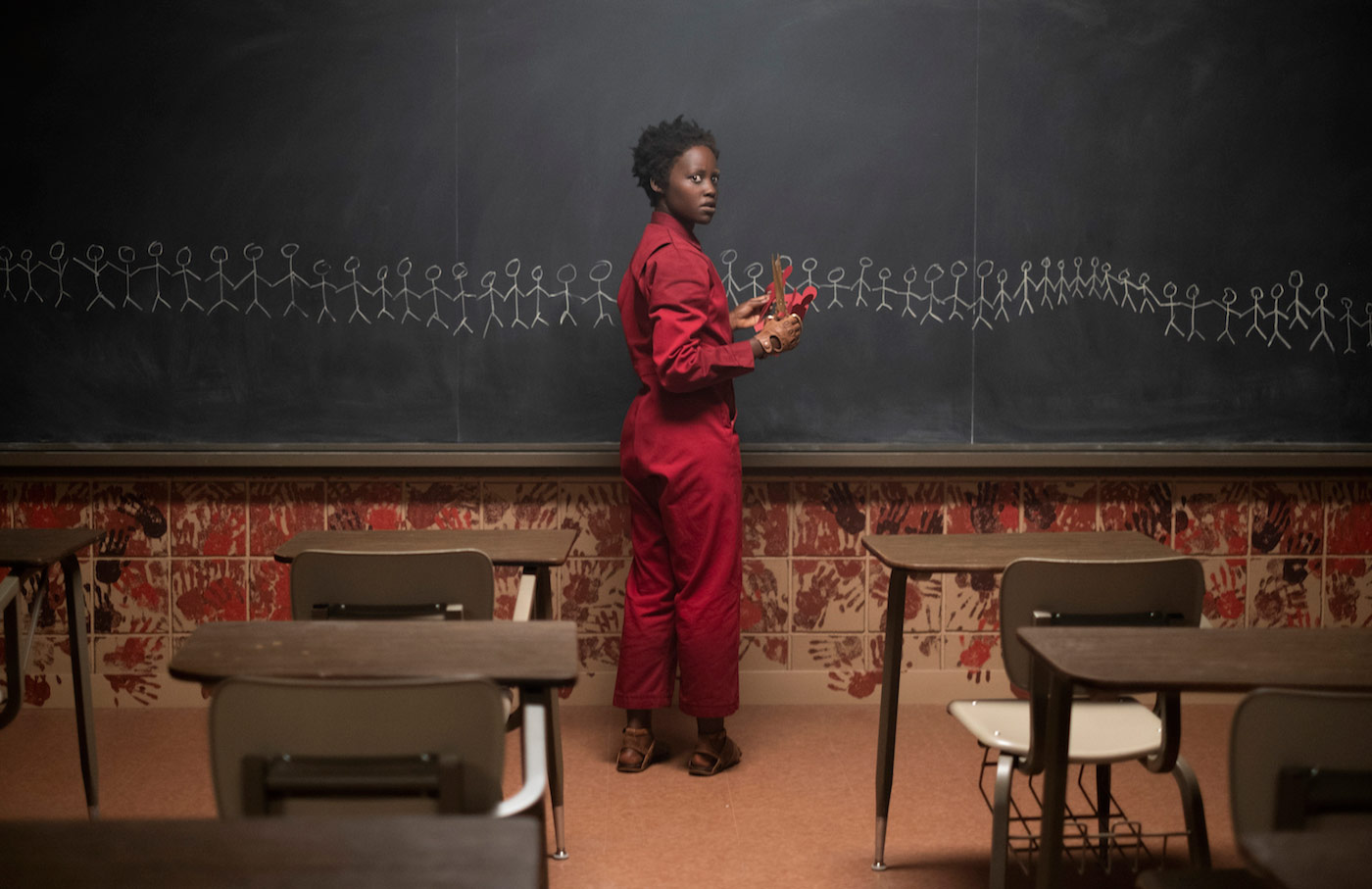 It’s only through relations of service and subservience that the prosperous and destitute have occasion to meet. “The rich and poor don’t eat at the same restaurants or take the same flights,” Bong added. “I want us to be able to live together. I hope for my son that we’ll one day have a mixed society, a coexistence between the rich and the poor.”

Here, then, is where Parasite takes us: not to the ledge of class war but to a shrug over inequality. The parasitic family members of his film have embraced a long con because the system itself is a con. Yet their suffering, in housing and work, is rationalized by their vulgarity and unscrupulousness. The rich family’s lifestyle, meanwhile, is never questioned. What bothers Bong is not the fact of poverty and unjust distribution; he only wants our social arrangements to feel a bit kinder. Never mind that a truly mixed society would demand slicing off the extremes.

This is not to plead for agitprop. Bong is too good a filmmaker for that. It’s simply to temper our political expectations of Parasite. If anything, his earlier movies offered more in the way of straightforward social critique. The Host, for instance, which introduced him to Western audiences, is a monster flick partly about American militarism and environmental crimes. Caricatures of capitalism and state power run through Snowpiercer, a postapocalyptic allegory set on a segregated train, and Memories of Murder, based on an unsolved string of real-life rapes and killings in a rural area of South Korea. (Last month, the police announced that they located a likely perpetrator in that case.) These films put humor and overstatement to more provocative use.

South Korea’s best filmic interpreter of class and social inequality is not Bong but Lee Chang-dong, who made last year’s elegiac Burning as well as Poetry (2010) and one of my all-time favorites, Peppermint Candy (1999). But Lee is too understated to draw the kinds of audiences that Bong can. Asked about his hopes for Parasite, Bong said that it “is in parts funny, frightening, and sad, and if it makes viewers feel like sharing a drink and talking over all the ideas they had while watching it, I’ll wish for nothing more.” Which ideas does he have in mind? Inequality, betrayal, and a kind of we’re-all-doing-our-best both-sides-ism are most apparent. The film doesn’t push us further—to mull Korea’s crisis of affordable housing, discrimination against the poor, fetishization of English and Western commodities, and glut of overeducated, underemployed youth driving the parasitic family’s scheme.

Bong deserves kudos, though, for inserting a bit of wry geopolitical commentary. We’re told that the subbasement of the Parks’ mansion, where the poor characters battle it out, was built as a bunker in case of an attack by North Korea. In mocking recognition of this fact, the dueling clans compare their struggle to the North Korean nuclear standoff, and Moon-gwang launches into a long, histrionic impersonation of a North Korean news announcer. It’s an odd scene, a sort of tonal tangent. But I wonder if Bong’s point is this: that the North Korean bogeyman, which features so prominently in the apocalyptic imagination of South Korea and the United States, is not the real enemy. The chasm between rich and poor, in wealth and opportunity and respect, is likely to kill us first.