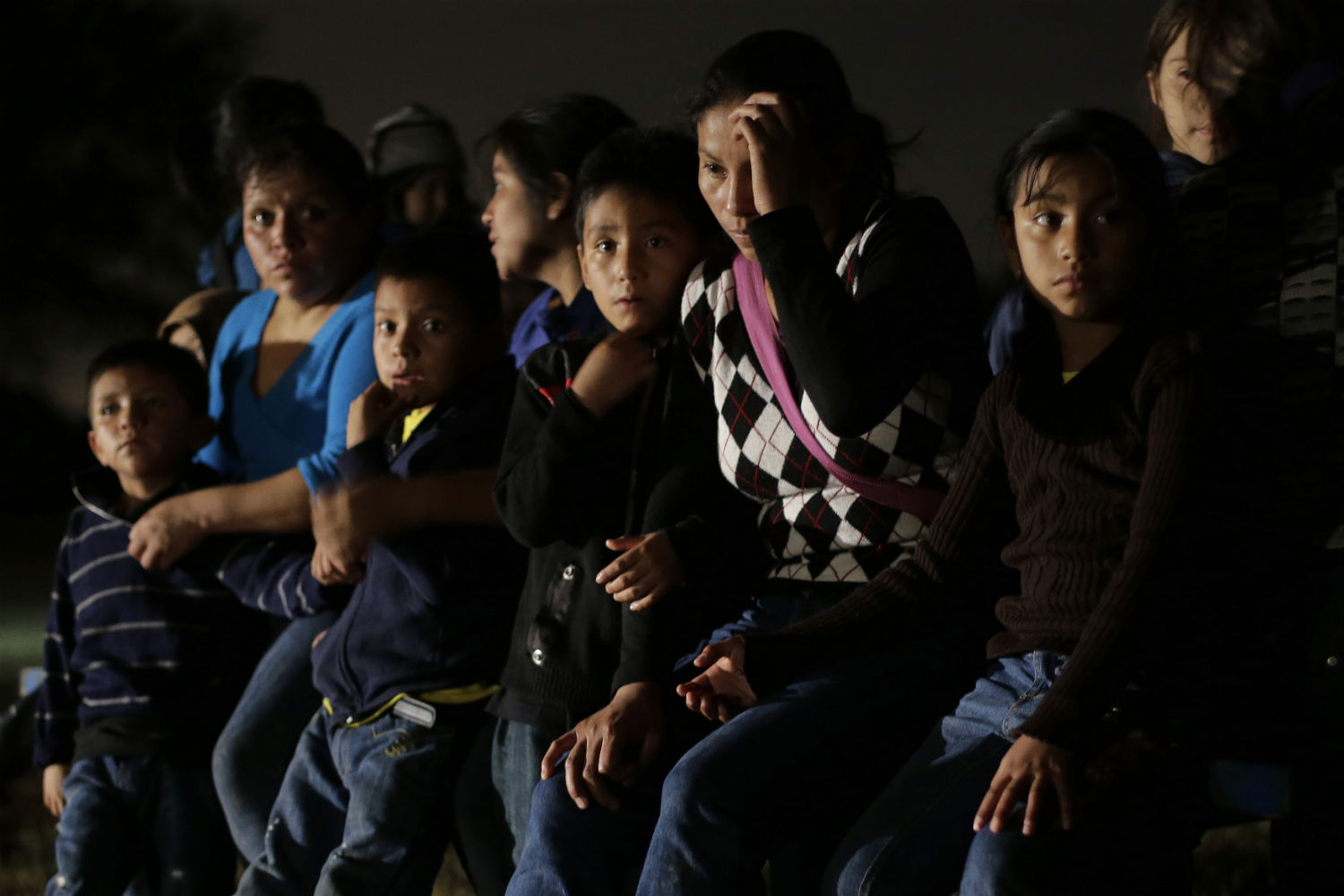 Immigrants from Honduras and El Salvador who crossed the US-Mexico border are stopped in Granjero, Texas. June 25, 2014. (AP Photo/Eric Gray)

In July, in Murrieta, California, right-wing demonstrators confronted busloads of people, many of them women and small children who had crossed the border fleeing horrific violence. “Nobody wants you! You’re not welcome! Go home!” they shouted. According to the Los Angeles Times, the migrants were on their way to a supervised release program overseen by a religious volunteer group. Instead, blocked by the protesters, they had to return to a border patrol station in San Diego.

The gratuitous cruelty of the American right, of course, isn’t much of a surprise. More shocking is the response of the Obama administration, which is scarcely more hospitable. As the United Nations and others have said, the situation on the border, where 52,000 unaccompanied children have arrived from Mexico and Central America since October, is more a refugee crisis than an immigration one. But rather than acknowledge this, the White House has suggested that it wants to strip some of these children of rights they have under the William Wilberforce Trafficking Victims Protection Reauthorization Act, a 2008 law signed by George W. Bush. According to The New York Times, Obama is considering seeking “flexibility” in the law’s requirements, which gives lone child migrants from countries other than Mexico and Canada the right to an immigration hearing and, in the interim, release into the “least restrictive setting that is in the best interest of the child.”

Even with the law in place, we’re seeing flagrant abuses of border kids’ rights. At some stations, children in diapers have been held in jail cells. “It was horrible,” says Democratic Representative Zoe Lofgren of California, who recently visited a facility in Brownsville, Texas. “There were hundreds of kids, little kids. I saw a 3-year-old—at least they said he was 3. I don’t think the kid was that old.” He was being cared for by a rotating group of preteen girl detainees, Lofgren says. “There are 8- and 9-year-old kids sleeping on cement floors with aluminum foil blankets.”

After she and some of her colleagues complained to the Department of Health and Human Services, Secretary Sylvia Matthews Burwell promised to have all children under 5 removed from jail. That is good news, though it is not the sort of thing that should require congressional action.

Meanwhile, the administration must acknowledge that many of the children—who largely hail from gang-ridden Honduras, the country with the world’s highest murder rate, and neighboring El Salvador and Guatemala—have valid claims to asylum. “The UN said that in their judgment, we should call this a refugee matter, and I think they’re right,” says Lofgren. Indeed, she argues, calling the underlying problem gang warfare minimizes it: “These are armed warlords competing for governance of the countries.”

In recent years, violence has surged in the region, in no small part because of American policies. “The United States has chosen to fight a ‘war on drugs,’ which has consisted of trying to break apart large cartels,” says Elizabeth Kennedy, a Fulbright fellow in El Salvador who works with child migrants. “There’s evidence that in breaking apart the cartels, you actually increase the violence for people living in those communities.” With the demand for drugs still ravenous, smaller groups emerge to fill that demand, warring with each other and setting up in new countries. “When we fought the war on drugs in Colombia, the cartels moved into Mexico with greater force, and crop growth moved into Ecuador and Peru,” Kennedy says. “And now we’re seeing that they’re moving to the Caribbean and Central America.” In Honduras, the problem has been exacerbated by the 2009 right-wing military coup, which, as the International Crisis Group writes in a recent report, “weakened already fragile institutions of law enforcement and justice.”

In countries where the cartels are most active, children reaching adolescence face a choice between gang membership and death. Kennedy recently wrote a report for the Immigration Policy Center, “No Childhood Here: Why Central American Children Are Fleeing Their Homes,” which notes that 59 percent of Salvadoran boys and 61 percent of Salvadoran girls list crime or violence as a reason they decided to make the perilous trip north. Lofgren met a grandmother from Honduras who’d fled with three adolescent girls after a gang leader threatened to seize them. “She probably saved their lives,” says Lofgren.

Despite the right’s canard that kids are fleeing to the United States because they think Obama has promised them amnesty, Kennedy says that only one of the more than 400 kids she has interviewed knew anything about the Dream Act or the president’s 2012 executive order halting deportation of some young immigrants. Indeed, people from the most violence-wracked states are also fleeing to neighboring countries, belying attempts to blame Obama for their migration. According to the UN High Commissioner for Refugees (UNHCR), between 2008 and 2013 there was a 712 percent increase in the number of asylum applications from citizens of Guatemala, Honduras and El Salvador seeking refuge in Mexico, Panama, Nicaragua, Costa Rica and Belize.

Greater border enforcement is not going to stop desperate parents from trying to get their kids out of imminent danger. Migrants know they’re likely to be deported, and many reach the United States only after multiple failed attempts. “Many children say, ‘It’s a sure death if I stay, and it’s a possible death if I go,’” says Kennedy.

Treating this as a refugee crisis does not mean simply opening the borders, which could empower the smuggling rings that profit by bringing children to the United States. It means providing safety for the kids who are already here and working with the UN to create centers in their home countries where those whose lives are in danger can apply for asylum in the United States or other nations. “To me, it’s recognizing reality,” Lofgren says. “You can say it’s not a refugee crisis, but it is, and we have tools in our toolbox, including UNHCR, to deal with a refugee crisis.”