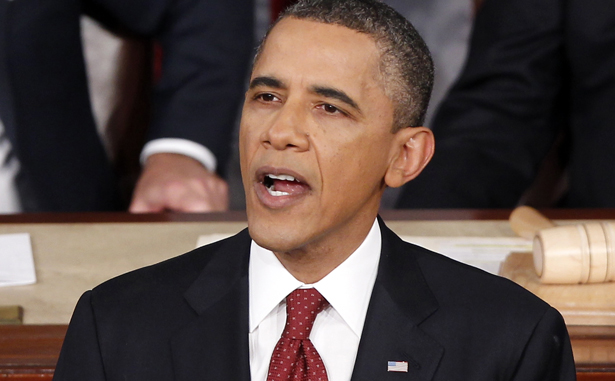 The deluge of attacks against President Obama by hawks, neoconservatives and various single-issue hardliners is a sign that the Obama administration is doing something right. Not everything, of course: from progressives, there is—and should be—criticism of Obama’s domestic surveillance program, the drone wars, the too-slow pullout from Afghanistan, the White House’s refusal to challenge Prime Minister Benjamin Netanyahu of Israel and the slow-motion effort to surround China with US military alliances in the vaunted “pivot” to Asia. But what’s got the right wing in an uproar is what Obama has done right. He’s close to a workable deal with Iran; he’s avoided war in Syria; he’s handled the Ukraine crisis cautiously and without seeking to provoke President Vladimir Putin; he’s getting out of Afghanistan; and he’s making some significant cuts in the US military budget.

Perhaps Obama gave the hawks an opening when, in speaking in the Philippines, he used a baseball metaphor to describe how he approaches foreign policy. Emphasizing his confrontation-avoiding, incremental approach to foreign affairs, Obama said:

That may not always be sexy. That may not always attract a lot of attention, and it doesn’t make for good argument on Sunday morning shows. But it avoids errors. You hit singles, you hit doubles; every once in a while we may be able to hit a home run. But we steadily advance the interests of the American people and our partnership with folks around the world.

Trigger the outrage. It came from every direction, ad infinitum, from those determined to portray Obama as weak, confused and lily-livered, as someone who won’t stand up for America and its “exceptionalism.” It came from Charles Krauthammer, from Commentary, from the Washington Post editorial board, from The Wall Street Journal and the Baltimore Sun, and lots of other outlets. And, of course, it provided further fuel on the fire of the Republican party’s quixotic and misguided effort to investigate, yet again, the non-scandal of Benghazi.

David Ignatius, a more thoughtful foreign policy critic, who says that he “sympathizes with many of Obama’s foreign policy goals,” still manages to complain about Obama’s “measured” view:

It’s painful watching the YouTube video of President Obama in Manila last week, talking about hitting singles and doubles in foreign policy. Everything he says is measured, and most of it is correct. But he acts as if he’s talking to a rational world, as opposed to one inhabited by leaders such as Russia’s Vladimir Putin.

In the realm of power politics, U.S. presidents get points not for being right but for being (or appearing) strong. Presidents either say they’re going to knock the ball out of the park, or they say nothing. The intangible factors of strength and credibility (so easy to mock) are, in fact, the glue of a rules-based international system.

So let me add my measure of praise for Obama’s baseball metaphor. The United States doesn’t need a president who hits home runs in foreign affairs, whatever that means. (Indeed, to extend the baseball analogy, before Obama we had a president who led the United Nations in errors, miscues and strikeouts.) In the spectrum of American foreign policy, which runs from hard-core neocons on the right, through traditional hawks, conservatives, realists and centrists, to liberal interventionists, to peace-minded liberals and progressives, Obama is just about dead-center. But in five and half years in office, he’s ended two wars and (except for the Libya misadventure) he hasn’t started any new ones.

In this space, I’ve been sharply critical of how Obama has approached the Arab Spring and its aftermath, in particular his bungling of the civil war in Syria—where the president first encouraged the revolt by calling for President Assad’s overthrow and then drew unenforceable red lines that almost led him to go along with Secretary of State John Kerry and other hawks who supported a bombing campaign against Damascus. And I’ve criticized the administration across a wide range of other issues. Still, to say—as many progressives seem reflexively wont to do—that there’s no difference between Obama and George W. Bush or that the Obama administration is still guided and influenced by the neocons is simply ignorant and ill-informed.

In that context, via the Associated Press, take a look at some of Obama’s comments during the stopover in the Philippines last week:

—“Why is it that everybody is so eager to use military force after we’ve just gone through a decade of war at enormous costs to our troops and to our budget? And what is it exactly that these critics think would have been accomplished?”

—“My job as commander in chief is to deploy military force as a last resort, and to deploy it wisely. And, frankly, most of the foreign policy commentators that have questioned our policies would go headlong into a bunch of military adventures that the American people had no interest in participating in and would not advance our core security interests.”

—“I would note that those who criticize our foreign policy with respect to Syria, they themselves say, ‘No, no, no, we don’t mean sending in troops.’ Well, what do you mean? ‘Well, you should be assisting the opposition.’ Well, we’re assisting the opposition. What else do you mean? ‘Well, perhaps you should have taken a strike in Syria to get chemical weapons out of Syria.’ Well, it turns out we’re getting chemical weapons out of Syria without having initiated a strike. So what else are you talking about? And at that point it kind of trails off.”

—“Do people actually think that somehow us sending some additional arms into Ukraine could potentially deter the Russian army? Or are we more likely to deter them by applying the sort of international pressure, diplomatic pressure and economic pressure that we’re applying?”

—“The point is that for some reason many who were proponents of what I consider to be a disastrous decision to go into Iraq haven’t really learned the lesson of the last decade, and they keep on just playing the same note over and over again.”

—“But we can continue to speak out clearly about what we believe. Where we can make a difference using all the tools we’ve got in the toolkit, well, we should do so. And if there are occasions where targeted, clear actions can be taken that would make a difference, then we should take them. We don’t do them because somebody sitting in an office in Washington or New York think it would look strong.”

So, two cheers for President Obama.